Stablecoins – the good, the bad and the bizarre 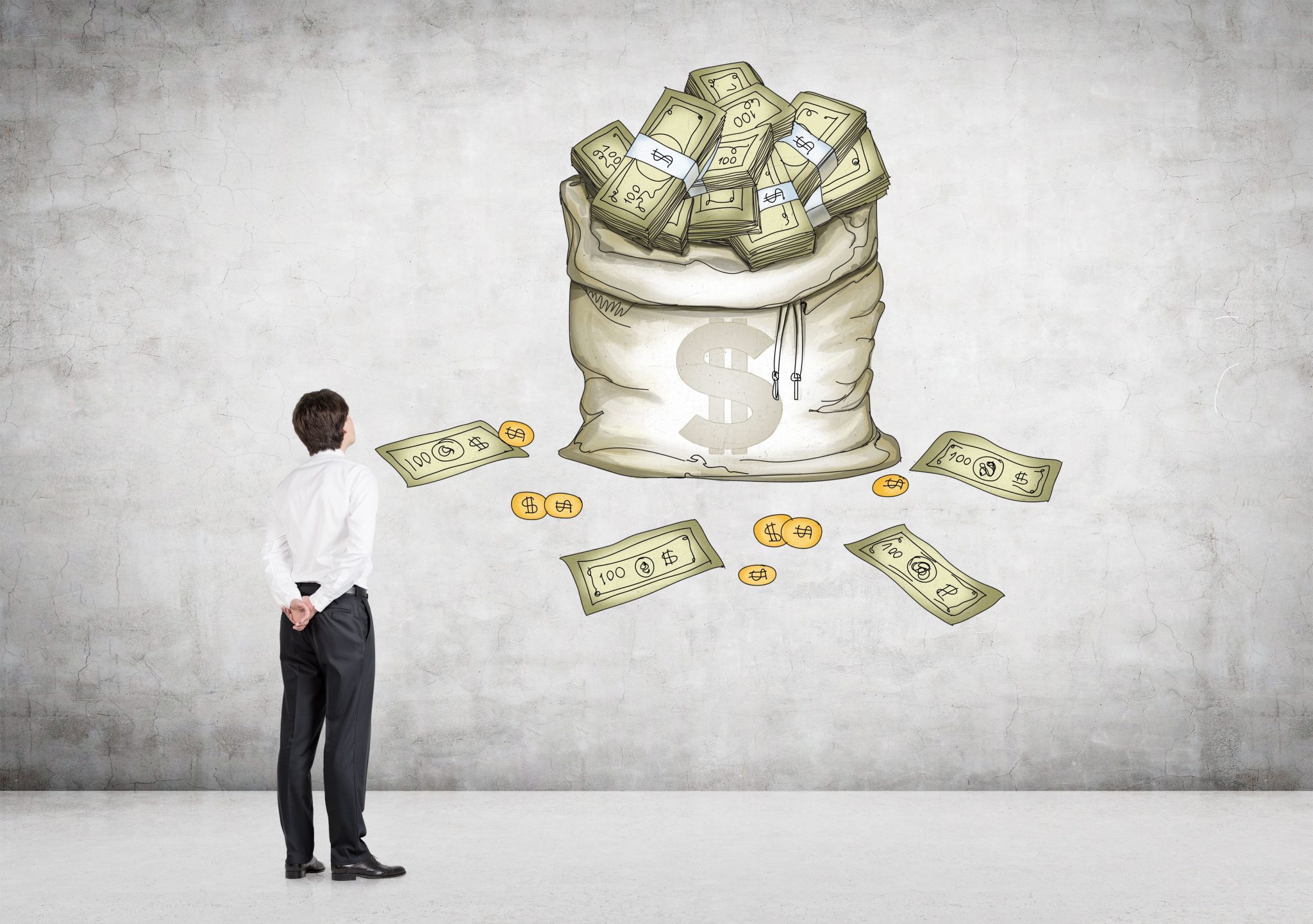 “There is nothing stable in the world; uproar’s your only music” – John Keats

It’s no secret that cryptocurrencies are volatile. With violent price swings being a frequent occurrence with this asset class during the last few years, crypto has earned a reputation for delivering spectacular gains and dramatic losses to investors.

Indeed, between 2016 and 2017, the American Institute for Economic Research found that Bitcoin’s average daily price change was over 6 times greater than the average of three benchmark currencies – the pound, the euro, the yen, and gold.

The most popular stablecoin Tether (USDT), for example, claims that for all of its tokens in circulation, it holds an equivalent number of US dollars in reserve, which enables it to trade at parity with the greenback.

Fiat-collateralized stablecoins: These are crypto assets such as USDT that are usually held in a 1:1 relationship with fiat currency, such as the US dollar or euro. This means that the stablecoin must have as many units of fiat currency in the bank as the circulating supply of stablecoin tokens. In the case of USDT, therefore, there should be over $2 billion of reserve currency in a bank account to match the same number of tokens currently in circulation. 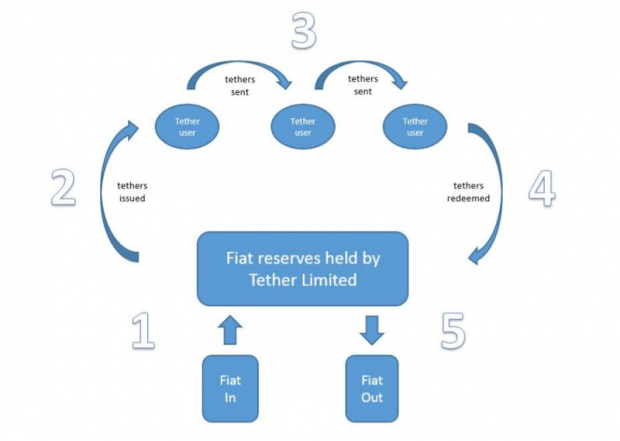 MakerDAO’s Dai stablecoin is among the most popular crypto-collateralized and uses a smart contract to hold ETH in reserve. Dai users post collateral for the tokens by locking up $3.00 worth of ETH for every one Dai token pegged to $1.00. The project also issues an additional governance token MKR, which entitles its holders to vote for the risk management and business logic of the Maker system.

Algorithmically controlled stablecoins: this type of stablecoin is not backed by any underlying assets. Instead, the token price is controlled by an ‘algorithmic central bank’ that manipulates the total token supply, such that if the price begins rising on the back of higher demand, the token supply increases to bring the price back down (while the central bank collects profits (or “seigniorage”) in the process; conversely, the token supply contracts when the price falls, and this is normally done by the central bank using its seigniorage profits to buy up tokens. The peg of the stablecoin at, say, $1.00 is thus maintained.

Arguably, the most renowned project in this category is Basecoin, which has recently renamed itself to Basis, and employs a unique method to maintain its peg to the dollar. Should the price of Basis fall below its $1.00 pegged value, the project issues a separate ‘bond token’ at a price below $1.00. The token is sold with the promise that it can be redeemed for Basis coins in the future.

Users buy such bond tokens on the expectation that the price will go back up toward $1.00. Once the price surpasses the $1.00-mark, the algorithm increases the money supply by issuing an equivalent number of basis coins to the number of bond tokens that were purchased, thus maintaining the peg and paying back the bond token buyers.

The problems with stablecoins

On the surface, Tether has so far mostly worked as intended in terms of maintaining parity with the dollar and thus providing a way for investors to hedge against crypto volatility. But it has not been without problems, the biggest being its inability to provide any audits that prove its tokens are indeed backed by equivalent US dollars.

Despite issuing a transparency report that details how it engaged Freeh, Sporkin & Sullivan LLP (FSS) to “review bank account documentation and to perform a randomized inspection of the numbers of Tethers in circulation and the corresponding currency reserves,” the report clearly states that it “should not be construed as the results of an audit.”

Tether’s revealed affiliations with crypto exchange Bitfinex – namely that both entities have the same CEO and CFO, and until recently, the same CSO – has also raised serious concerns about its legitimacy. The two operations previously insisted that they were run separately, which was eventually found to be false (a more detailed timeline of their activities can be found here).

And an influential report released in June found that half of December 2017’s massive Bitcoin price rally was due to the hours immediately after Tether flowed to a handful of other exchanges. The paper concludes that USDT was “used to provide price support and manipulate cryptocurrency prices.”

The fact that many stablecoins are incapable of permanently maintaining their peg to their underlying assets is also a concern.  On October 15th, USDT failed to hold its dollar peg, trading down to as low as $0.90 on crypto exchange Kraken. 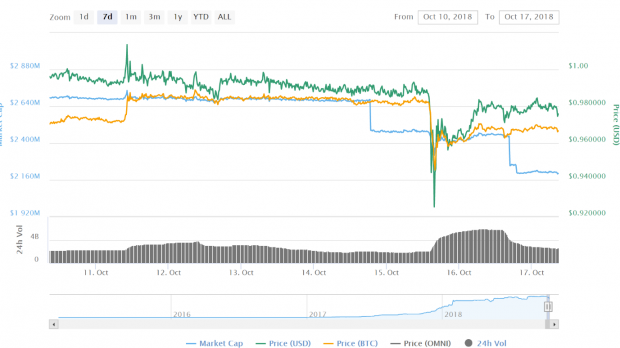 While it has managed to claw back this loss, such price instability from a so-called stablecoin won’t work quite well with users’ expectations. Even Binance CEO Zhao Chenpeng appeared to pour scorn on recent events.

And on the flip side, meanwhile, the Gemini Dollar – a stablecoin launched recently by the Winklevoss brothers – briefly lost its peg when it shot up to $1.19. Clearly, if such stablecoins consistently fail to maintain parity with their pegs, investor confidence in them will continue to wane, and markets may well end up collapsing.

It’s also worth noting that with a bank account holding the reserves that are backing stablecoins such as USDT, such systems are highly centralized. We are effectively relying on this bank to ensure that each token has a corresponding dollar being held in the account. And given that this holding activity is not recorded on the blockchain, we can’t be certain about what the bank is doing with those reserves.

While crypto-collateralized stablecoins decentralizes things by ensuring there is no reliance on the fiat world, the clear downside to this type of stablecoin is that by being backed by crypto, it is exposed to the volatility of that crypto. As we have seen, this volatility can be substantial, and so it seems to fly in the face of what stablecoins are designed for: to eliminate the volatility of the crypto world, rather than replicate it.

And Instead of holding a 1:1 ratio with its underlying asset, crypto-collateralized stablecoins usually hold a ratio greater than 1:1 with its backing crypto to secure against substantial declines in price and a loss of the peg. The Dai stablecoin, for example, uses a smart contract to hold ETH in reserve in a ratio of 3:1, which means you have to tie up more of your capital as collateral in this system, which is neither desirable nor efficient.

An algorithmically controlled stablecoin may well eliminate some of the above problems of asset-backed coins. But its relatively complexity may well be a stumbling block. The Basis project requires three different tokens to operate, for instance. And it also only functions successfully on the basis that bond token buyers expect the price of Basis to rise in the future. Should Basis coin lose its peg and token holders don’t expect a rebound back up to $1.00, there will be little incentive for them to purchase bond tokens. As such, further downward pressure on the Basis coin price could precipitate a market collapse.

And yet despite these problems…

We are now witnessing an influx of new stablecoins being brought to market. 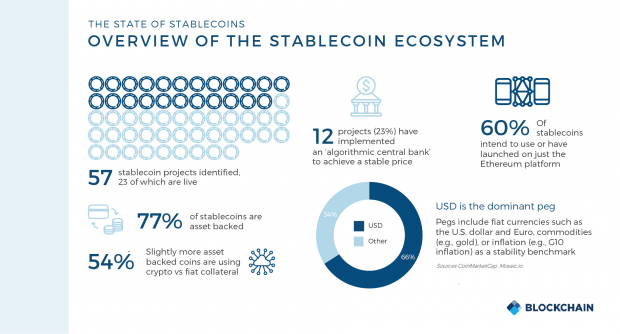 The move reflects how stablecoins are being regarded in an increasingly favourable light by major investors. The main reason for this is that if stablecoins such as USDT do manage to resolve their transparency issues, they will play a crucial role within the cryptocurrency ecosystem: they will offer stability against volatility. As such, they will function as a legitimate hedging/insurance tool for investors, while their virtually constant value could offer several key benefits to market participants:

It might be too early to declare the stablecoin concept as completely foolproof. But progress is being made on improving their transparency. The announcement of a partnership between auditing leader PwC and decentralized lending platform Cred to “understand key considerations in quickly moving towards enhanced standards that build confidence and trust in the crypto ecosystem and usher in the next 100M users of crypto assets” is just one recent development in aid of establishing such transparency.

Hopefully, progress can be made on this front. Given the volatile nature of cryptocurrencies, an effective, legitimate hedging tool such as a stablecoin will support the process of market maturation, something crypto needs with increasing urgency.