Financial markets end the year in a Psychological frenzy 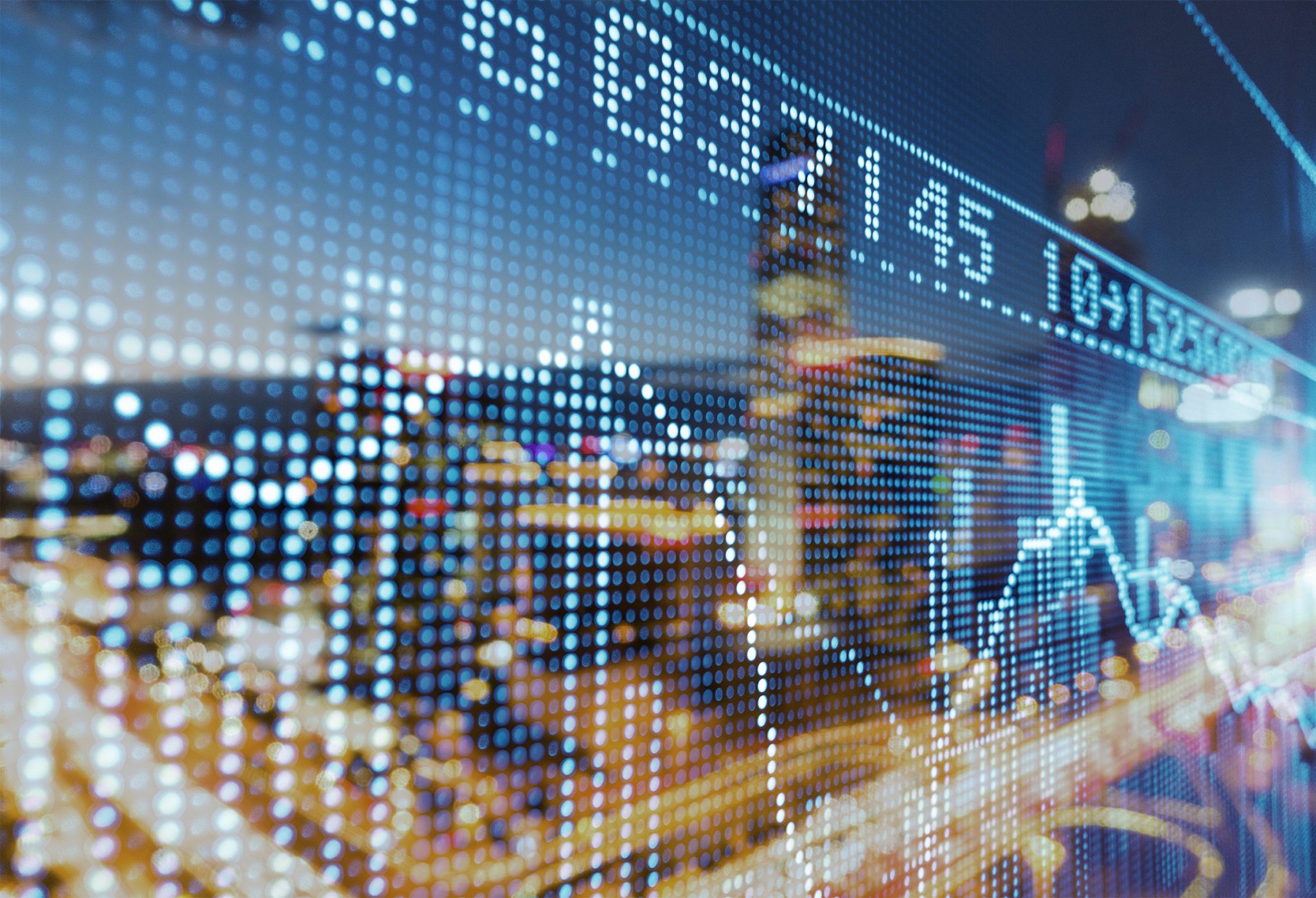 The financial market moves to end the year depicted the true definition of the “roller coaster ride.” Records got broken on the U.S stock market with the biggest Pre-Christmas loss ever, followed by the biggest one day rally ever on the 26th, with Dow posting a gain of almost 1100 point, with another 1000 point swing the following day. The volatility shook up the Cryptocurrencies as well – Bitcoin gave up most of the gains from the last week to drop below the support and staged another rebound which is holding at the time of writing. More details to follow later. The U.S Dollar remained edgy & indecisive with the widespread volatility in other markets lacking direction in thin markets. Let’s look at some numbers before moving on… 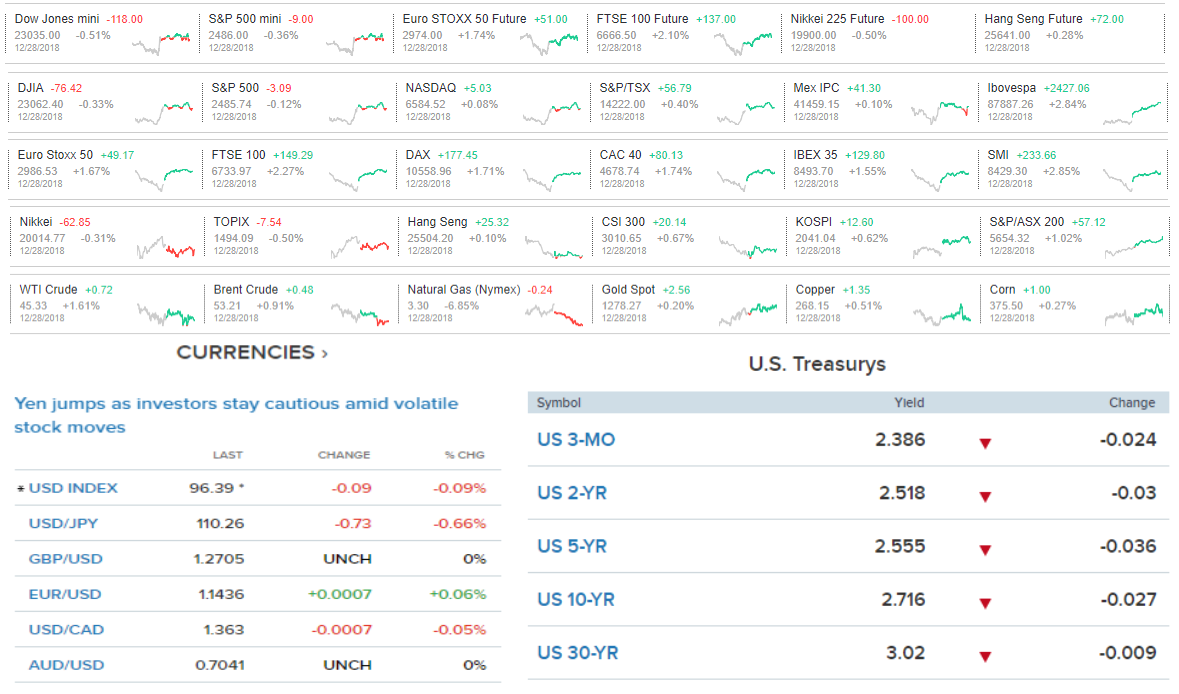 A recent article from the Wall Street Journal suggests that Bitcoin’s correlation with the Stocks remains high. The research by Excalibur Pro Inc. proclaimed a 0.84 correlation to Gold (traditional hedge against market risk) for the past 5 days & a 0.77 to CBOE’s VIX (Volatility Index). Historically speaking, however, these claims can’t be corroborated. The price action in the Crypto kingpin this week certainly confirms the research in the short run at least. Looking at the price action of BTC, it still looks constructive as long as the support around $3800 holds. Bitcoin had a bit of a wild run since the last week peaking around $4400 before giving up most of the gains & ending the week with another rebound to over $4K. Total Market cap for the Cryptos sits @ $131 billion with BTC dominance @ 51.8% at the time of writing. 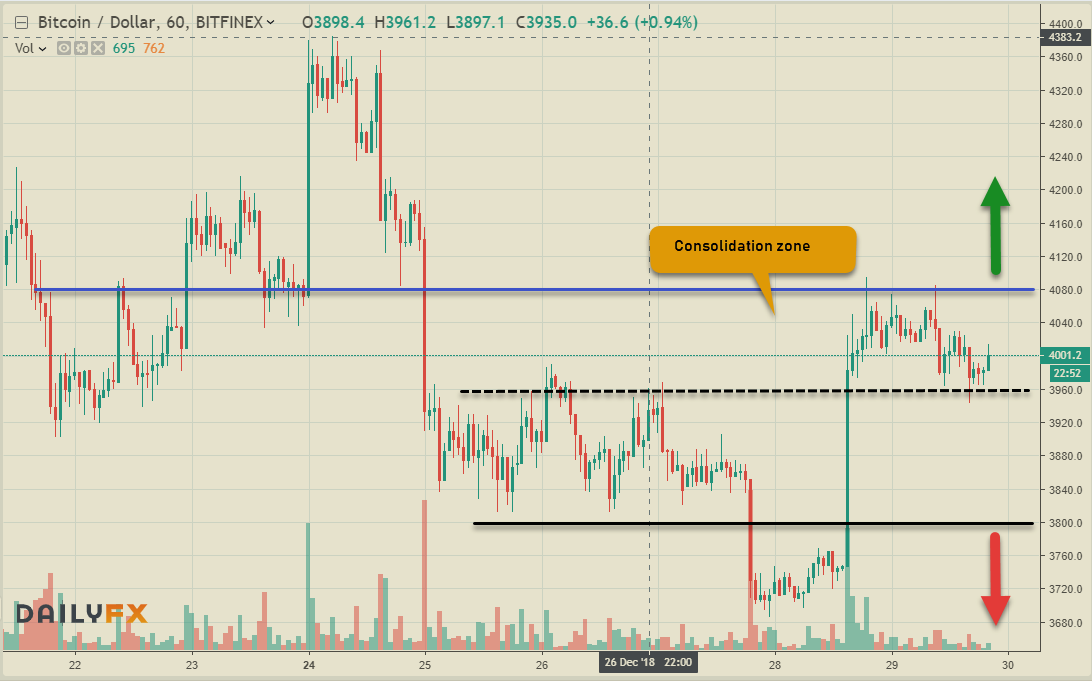 On the trading front, Huobi Derivatives market which was launched recently crossed $ 1 billion mark. With the interest generated in its Derivatives market, Huobi is expanding its offerings to include contracts for the Alt. coin EOS as well. The new contracts will support price limit, order limit and position limit orders at up to 20x leverage. It was a bad run for Cryptos in 2018 but at least all the hype has been sucked out with this downturn & also quite a lot of bad players have been flushed out. Most of the pundits are expecting an uptick in Crypto markets for 2019. Any or all of these could be the trigger next year – Bitcoin’s ETF, Crypto friendly regulations, Amazon’s acceptance of digital currencies or Facebook’s entry with a stable coin. Another good news for Bitcoin this week was the continued expansion of the scalable solution Lightning Network which has crossed $2 million mark worth of BTC. 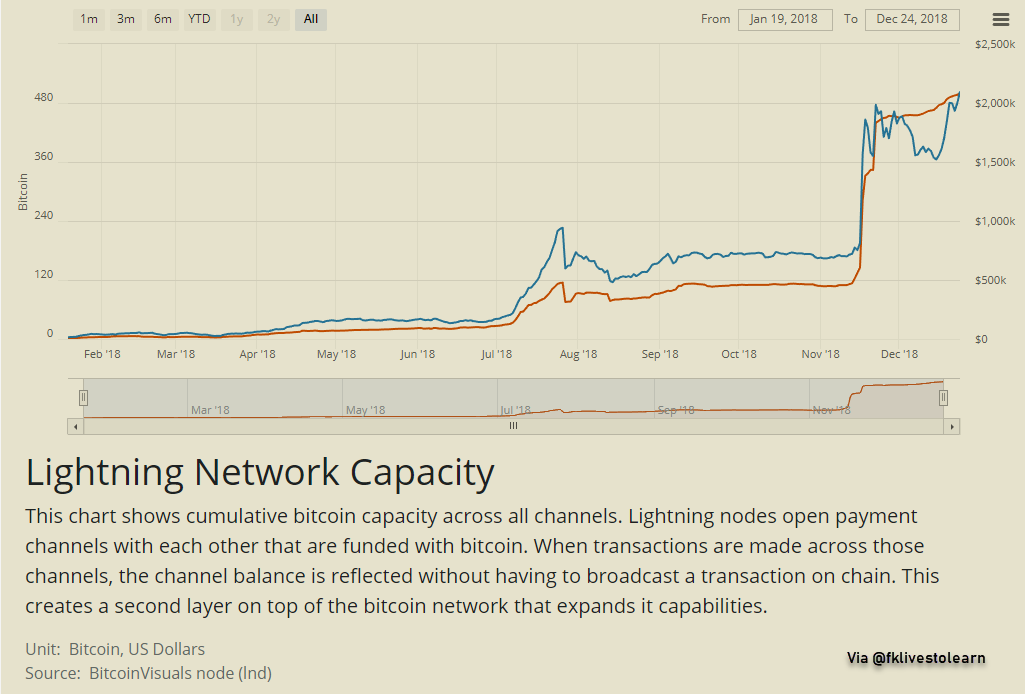 Sufficed to say that this has been the most volatile holiday season for U.S stocks ever. The wild ride has spooked the domestic & global investors alike. The confusion among the investors is pretty clear as the major U.S indices swayed from one end to the other. Although Dow, S&P 500 and Nasdaq ended the week higher, the year closed disappointingly at -6.98%, -7.60% & -5.86% respectively. Across the Globe, Japan’s Nikkei Index fell on the final trading day of the year leading to its first annual loss in 7 years. The benchmark index booked a 12.1% decline in 2018, breaking the longest winning streak since the late 1980’s. A lot of unresolved issues still for the markets – U.S/China trade dispute, U.S government shutdown, slowing Chinese economy, hawkish FOMC & a U.S yield curve inversion is not painting a pretty picture for Global stocks in 2019. Santa Claus rally was a bummer too this year – For those of you, who don’t know what a Santa Claus rally is & how it fared this year in comparison to the past 5 years, the following infographic should be helpful. 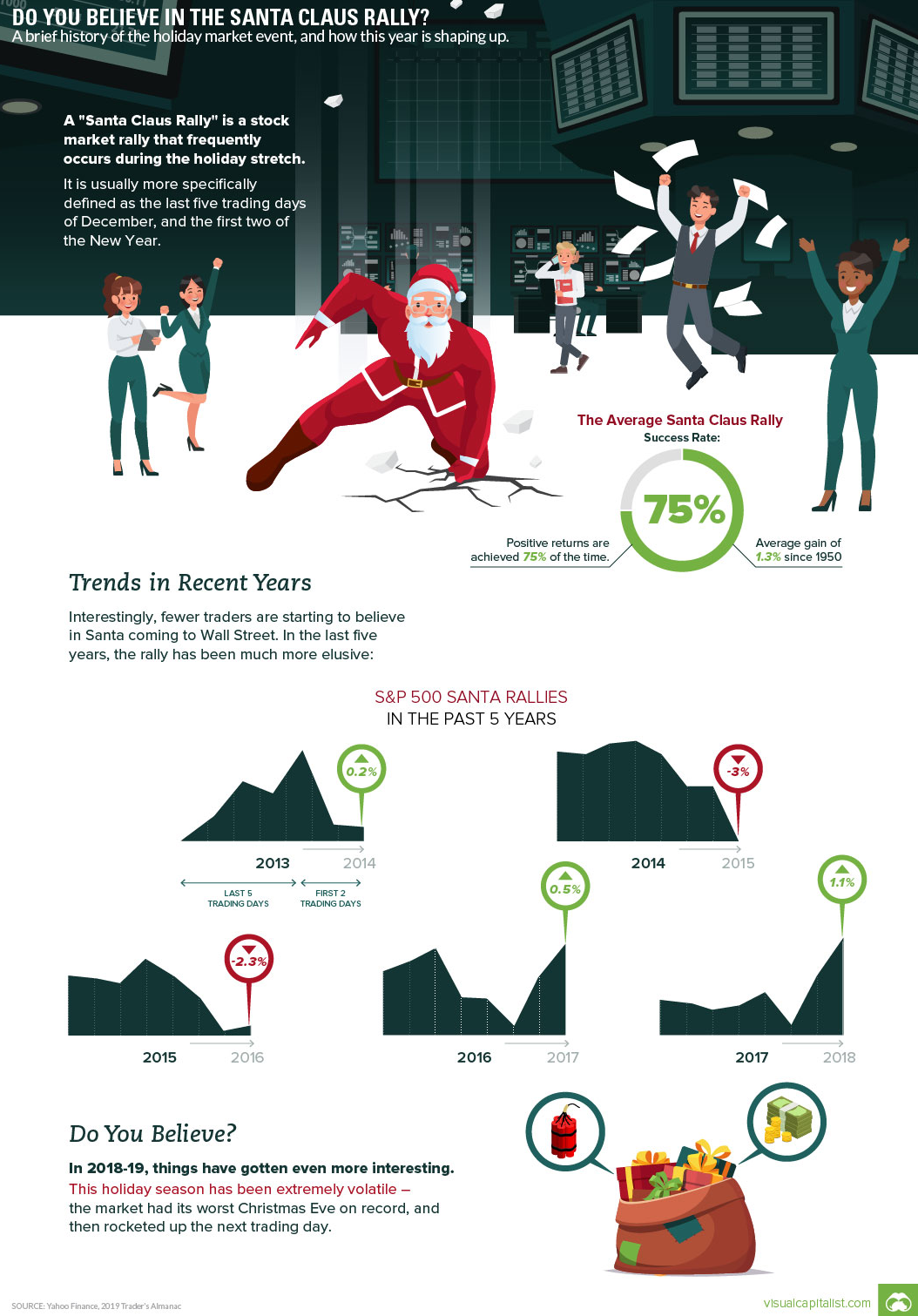 Some consolation for the market Bulls is the news that a U.S trade team will be travelling to Beijing in the week of Jan. 7th to talk with Chinese officials (Bloomberg) on how to resolve the trade tariffs dispute between the two biggest economies of the World. A breakthrough on this thorny issue could bring stability to global markets which have been reeling.  Reviewing the chart for the S&P 500 index, current downtrend still looks intact. The price moved above the ceiling of the bearish channel for a little bit before closing right on top of it. The support turned resistance around 2625 will cap any gains for now. The strong bearish momentum may have taken a breather with the RSI coming out of the oversold territory, but the price action points to continued weakness. In other financial news, India’s rise to global economic stage scored another victory when it’s stock market overtook Germany as the seventh largest in the World. 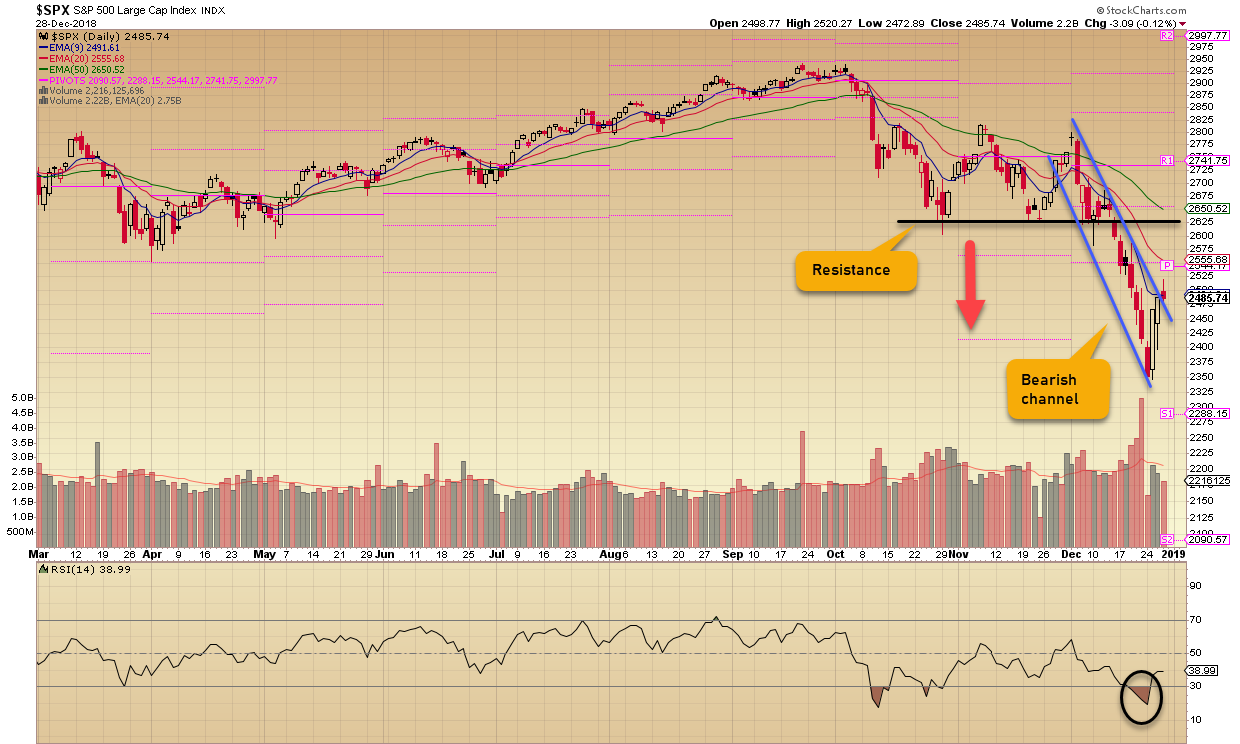 Greenback has held its own throughout 2018 & continued its bullish run, with signs of topping & extended consolidation showing up in the Dollar Index towards the end of the year. Commodity pairs remained anemic with the current risk-off sentiment in markets. EURUSD surprisingly has held its own recently but the gains are still capped below the recent high of 1.1475, while GBPUSD remained extremely choppy with a bearish bias to end the year looking ahead to Brexit resolution. The benchmark pair of USDJPY for the risk sentiment in markets closed towards the recent lows following stocks. The congestion zone in the DXY chart shows the confusion among Dollar traders as markets got whipsawed. Consolidation could continue as long as the 96.00 support holds, a fall below which would confirm further correction. 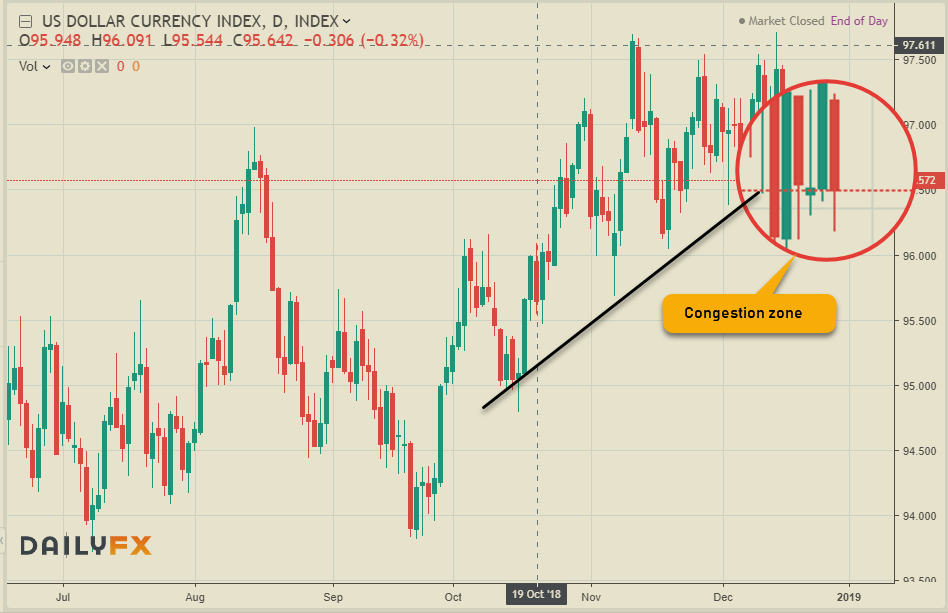 Next week will be light on the economic data with the holiday-shortened week. However, we will still be looking at employment numbers out of Germany, Canada & U.S. With the recent inversion of the U.S yield curve, there has been a lot of talk about the inevitable recession. The yield curve inversion has been a solid indicator of recession in recent history. Here’s a nice refresher in Yield curve basics & how the inversion predicts a recession. 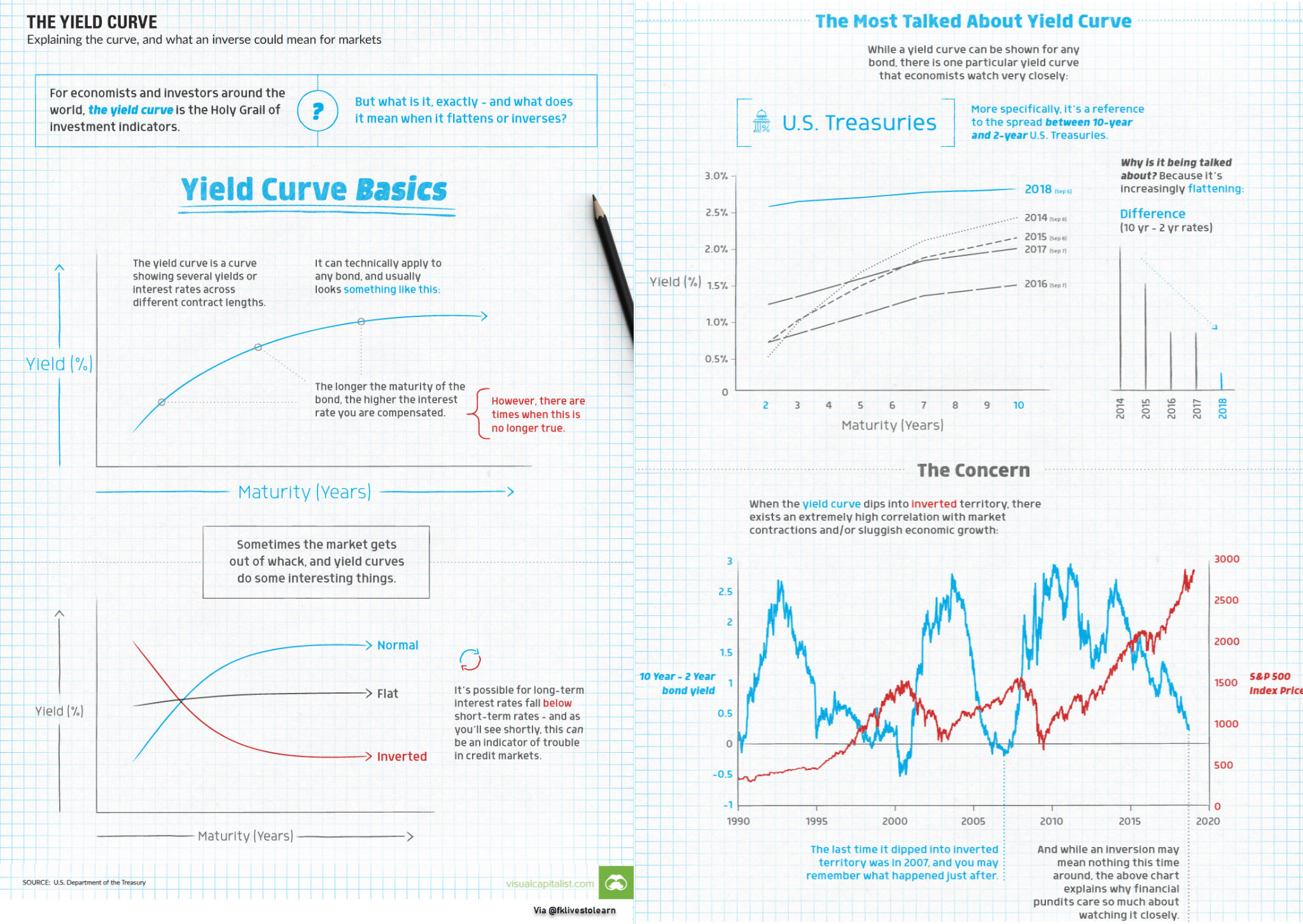 Signing off here with the last weekly update of the financial markets & wishing all of you a prosperous & successful 2019. Happy Trading & a Happy New Year!

Faisal Khan Faisal is based in Canada with a background in Finance/Economics & Computers. He has been actively trading FOREX for the past 11 years. Faisal is also an active Stocks trader with a passion for everything Crypto. His enthusiasm & interest in learning new technologies has turned him into an avid Crypto/Blockchain & Fintech enthusiast. Currently working for a Mobile platform called Tradelike as the Senior Technical Analyst. His interest for writing has stayed with him all his life ever since started the first Internet magazine of Pakistan in 1998. He blogs regularly on Financial markets, trading strategies & Cryptocurrencies. Loves to travel.
« For SEO, the words are key
Visualizing the difference between Data Science and Business Intelligence & more… »