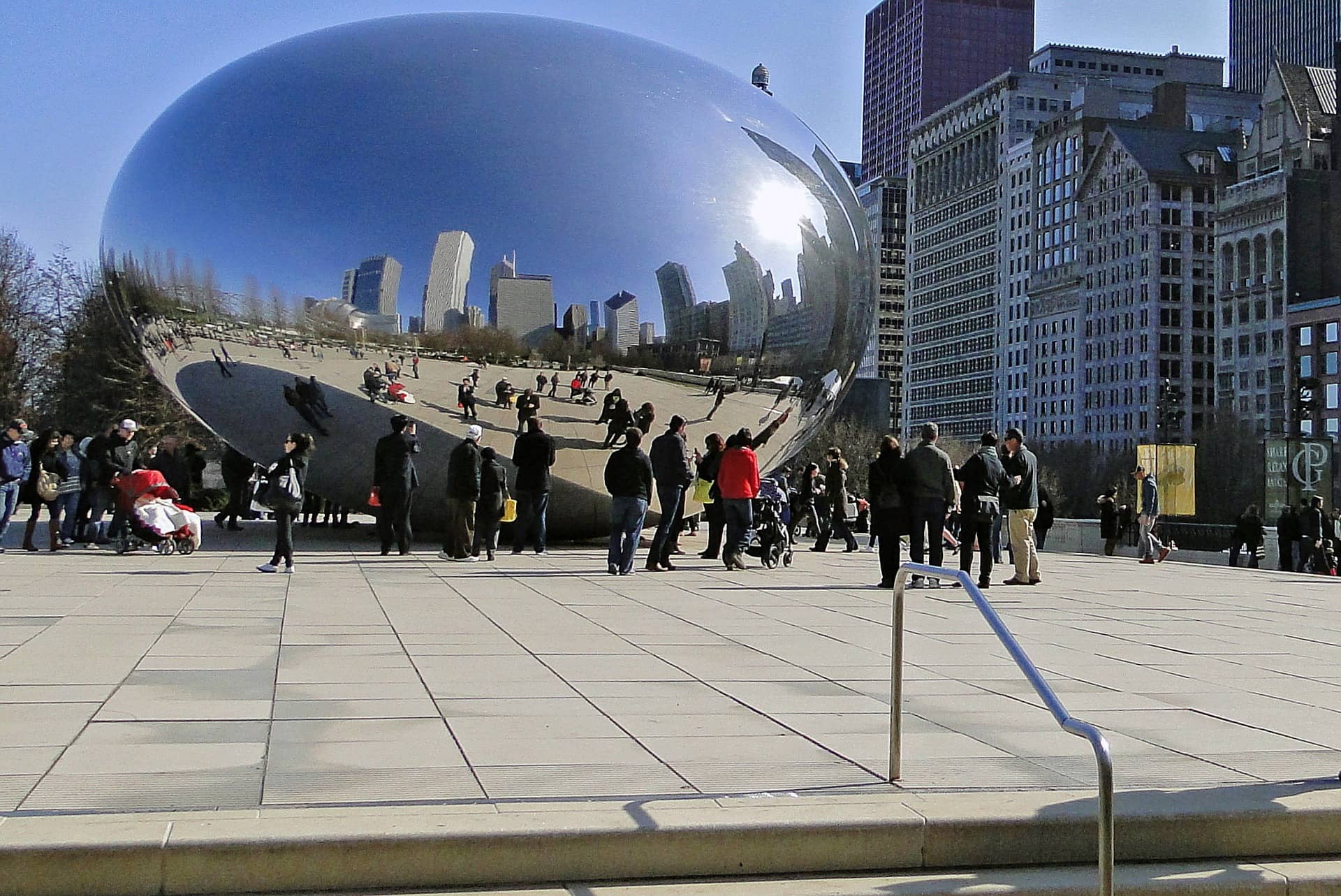 Americans emerged from the election even more divided than before. Both Democrats and Republicans claim that the other side does not have the right program. Both of them might be correct.

In his first speech as a president-elect, Joe Biden promised to seek compromises with political opponents. But how good could any compromise be when our experience so far shows that neither side has ideas that could withstand the other side’s critique? Many Americans seem to lose hope that things could ever get better. Political writers often mention the term “dystopia”; I wrote a polemic with one of them. On Medium, articles claiming that it is bad and it will get worse have high rankings.  Hopelessness radiates from the readers’ comments. After decades of political deadlock, how can I claim that fixing American problems could be easy? 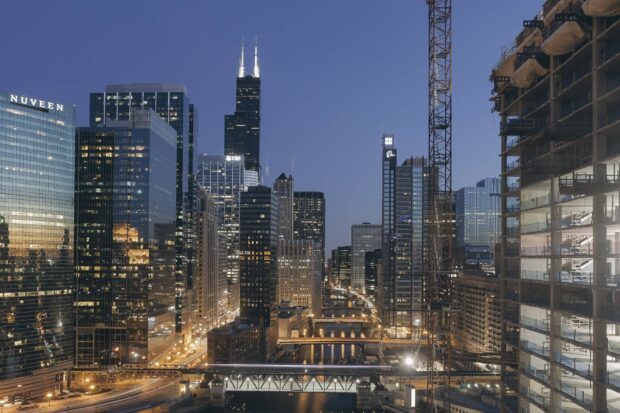 Take Illinois as an example

Illinois is in a deep financial crisis. The former Republican governor, Bruce Rauner, sought political reforms but could not get enough support. His approach was that a lower income tax would stimulate business, bringing more revenue to the state. In the 2018 election, he lost to the current governor, J.B. Pritzker, a Democrat who ran on the platform that the state revenue should increase as a result of millionaires and billionaires contributing their “fair share” – in plain language, paying higher income taxes.

The Illinois Constitution defines that all residents pay income tax at the same rate. The state legislators approved the draft of an amendment to the state constitution, but the final decision required a referendum. It was on the November 3 election ballot. Although 55% of Illinois voters endorsed the Democratic presidential candidate, about half a million of them did not support their Democratic governor, voting against the proposed constitutional amendment, which was defeated, receiving only about 45% “yes” votes.

About one year ago, opinion polls predicted overwhelming voter support for the so-called fair tax amendment. But opponents started voicing their opinions, mostly on the internet. To be on the safe side, in December 2019, Governor Pritzker created a committee named “Vote Yes For Fairness” and personally donated $5 million to it. With the election approaching, he added an additional $50 million in June 2020 and topped that with another $1.5 million a week before the election. Seeing that things were getting serious, in July 2020, the tax amendment’s challengers formed ”The Coalition To Stop The Proposed Tax Hike Amendment.” They started humbly with a few hundred thousand dollars from several business people. By the end of August, they got $20 million from Ken Griffin, the richest man in Illinois, who publicly challenged Governor Pritzker. A month later, Griffin added $26.75 million and capped that with $7 million a few days before voting. His $53.75 million total was still less than the $56.5 donated by Pritzker in this spectacular duel of billionaires.

Proponents of the amendment argued that fixing the state’s deficit by increasing taxes on all residents is not fair; the richest should pay more. Adversaries won by pointing out that the constitutional amendment would open a legal venue for lawmakers to apply income taxes on distinct groups of residents at different rates, not merely those with incomes above $250,000 as initially targeted. Opponents argued that rich people have the resources to move out of state; hence, expecting an additional $3 billion in tax collection might be unrealistic. Even if it were realistic, it would unlikely make much of a dent in the unfunded state pension obligation estimated at $137 billion. Enough voters agreed. 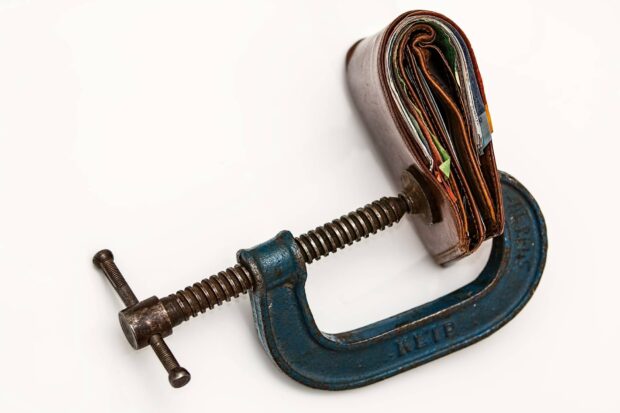 As a result, Illinois is in a much more dire financial condition than before. Its deficit goes deeper, as do the disagreements on how to fix it. The hopelessness of this situation perfectly mirrors our impasse in major national political problems such as health care, immigration, inequality, the federal debt – you name it.

Below, I present an approach that can resolve these challenges.

Let us use the following three-step approach:

I did not invent this approach. It was an ongoing mantra of my high school literature teacher in Poland. She was an old lady, in her 70s, teaching part time just one class. The three principles seemed obvious to us. We took the obsession of our teacher with a grain of salt. Still, with years passing, I began noticing that subconsciously I use these three rules in my life and business decisions and my persuasive writing. I can credit all my successes to sticking to these rules; I can link all my failures to my having ignored them. On several occasions, I noticed that high-profile business and life mentors in the United States have provided word-by-word the same advice that my teacher was trumpeting into our heads more than half a century earlier.

How does it apply to Illinois?

The sense of an inability to change radiates from commentaries in local media and on the internet. Even political analysts who understand the problems and have realistic concepts of what we could do, sound as convincing as someone hoping to become a millionaire by playing the lottery. The overwhelming political system paralyzes people’s imaginations. No one seems to have hope that anything can be done better in Illinois than it is now.

Looking at my old teacher’s rules, I see that Illinois fails on the first one. It lacks a conviction that things can be done better. Why is there no hope for improvement? Because whatever has been tried so far, it has not worked. Why did it fail? It failed because Illinois neglects the second rule of my former teacher’s method; there is no clear definition of the problem. Everybody agrees that unfunded pension obligations are sinking the state’s finances, but it is hard to comprehend for laypeople. It somehow implies that to restore the state’s solvency, we would need to cut payments to retired government employees, which does not sound right.

Many smart and dedicated individuals in Illinois have devoted a lot of their time and money to figure out the essence of the financial mess. Mark Glennon, the founder of Wirepoints, is – at least in my opinion – the most thorough in understanding Illinois’ finances and having realistic and logical ideas of how to fix them. After the defeat of the fair tax amendment proposal, Mr. Glennon wrote a column that Illinois needs reforms instead of taxes. I recommend it to those readers who want to understand Illinois’ problems fully. For everybody else, by listing 16 major reforms that Illinois needs and mentioning that there are more, Mr. Glennon failed the second rule of my old teacher. In reference to the old saying, Mr. Glennon sees 16 big trees and mentions smaller ones, but he did not tell us we have a forest. And he did not name it.

In an ad in the Sun-Times, Chicago’s second newspaper, a private individual named the forest, defining the essence of the Illinois problem. The ad reads that about 3.8% of state residents are responsible for $137 billion in debt. When I checked, the person behind the ad in the Sun-Times is a small business owner who, to stay in business, intuitively follows my teacher’s rules. He applied these rules to the info he found at places such as Wirepoints. That person spent $4,500 of his money to run this ad three times. 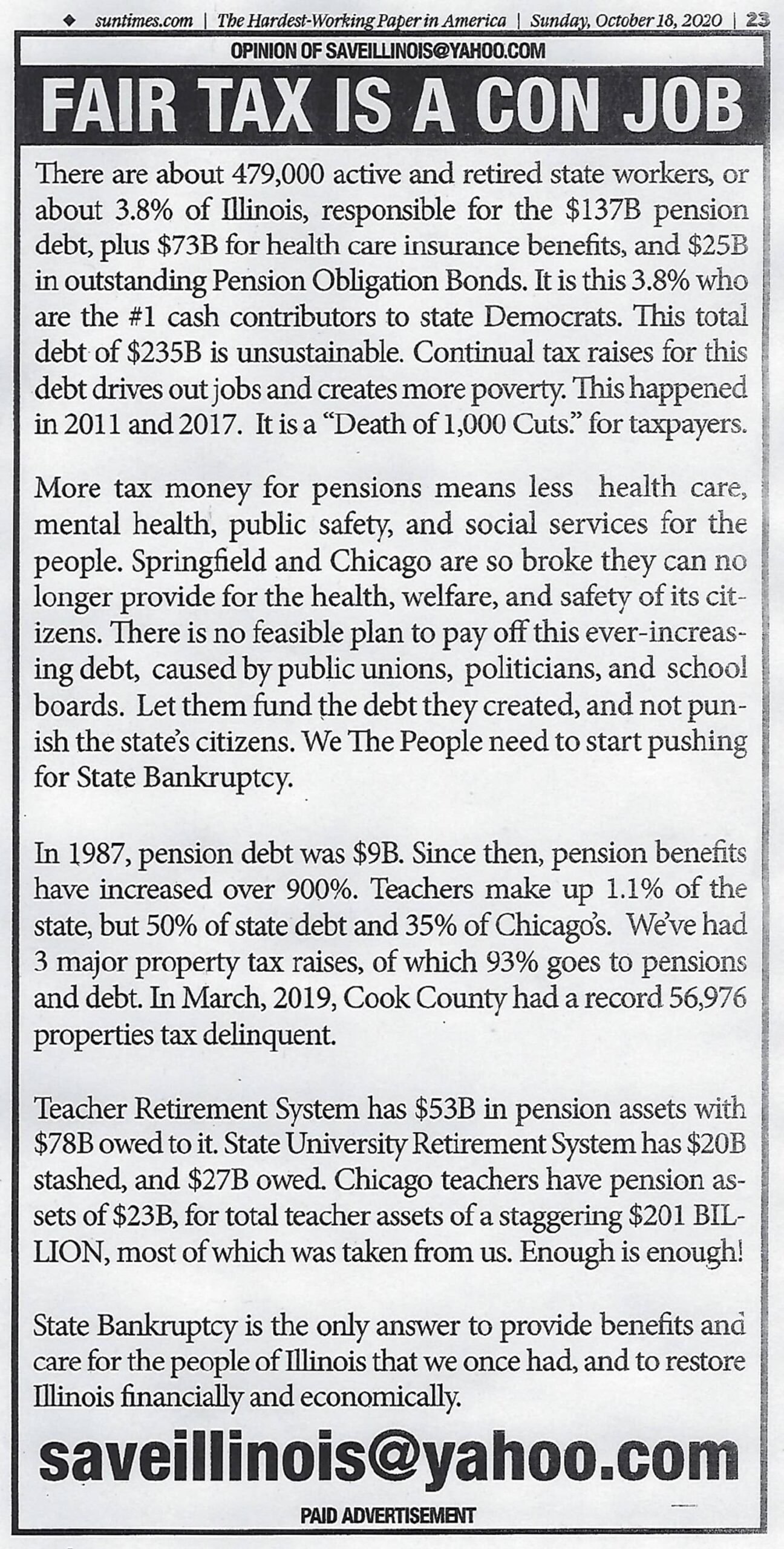 The ad concisely summarizes the aforementioned column by Mr. Glennon. In Illinois, we have a privileged class of residents. They are those among us whom we hired as public servants, but they abused their powers to tweak laws to guarantee themselves much higher earnings than most of us can get in the private sector. The minimum wage for them is around $100,000 per year or $50 per hour, but they are the same individuals who herald as immense progress a $15-per-hour minimum wage for the rest of us. The work of OpenTheBooks.com, a fiscal transparency advocate, has an abundance of data about excessive pays of the privileged in Illinois.

From the column by Mr. Glennon, we can conclude that the privileged cast is larger than mentioned in the Sun-Times ad.  We should add private businesses receiving government contracts. According to the law, people fulfilling these contracts are paid exuberant (prevailing) wages.

Summarizing, one can agree that the existing system is unfair, not because 18 billionaires and about 350,000 millionaires in Illinois do not pay enough in taxes. By the way, about one-third of these millionaires are public service pensioners, who, according to official assurance, would not be included in the proposed tax increases. The system is unjust because at least 500,000 Illinois residents, currently working in the public sector or retired, are unacceptably overpaid. They use their income to support the corrupt political system that allows them to receive disproportionally high salaries and pensions. It is the essence of Illinois’ problems. When this message is clearly delivered to Illinois residents, we will be halfway to the solution.

It is worth mentioning that in the about $120 million spent in the duel of billionaires, not even one penny was given to identify the essence of the problem. Not even one penny went into explaining to voters what the real trouble is. Or at least what this or that person thinks that it is.

We can anticipate that there will be another variation of the same problem in every upcoming election. Unless, instead of throwing money at mitigating the symptoms, someone will scrutinize the Illinois problems in the public’s view so that voters will have a clearer picture of the competing diagnoses. And then the voters will decide accordingly.

Henryk A. Kowalczyk An engineer by training, an argumentative writer by calling, and an entrepreneur by necessity. In my youth, I was among those Polish political writers who paved the road to the peaceful system transformation that took place in 1989. Since 1985, I have lived in the Chicago area. Working in the service business, I have experienced an America not known to most politicians and political writers. I have built from zero a few successful businesses, both in Poland and in the United States. I write whenever I see that the prevailing voices in the political arena are misleading or erroneous. I write to tell it like it is.
« Social Media and Covert Censorship by Sponsoring Popularity over Credibility
How Machine Learning and Artificial Intelligence Changing the Face of eCommerce? »