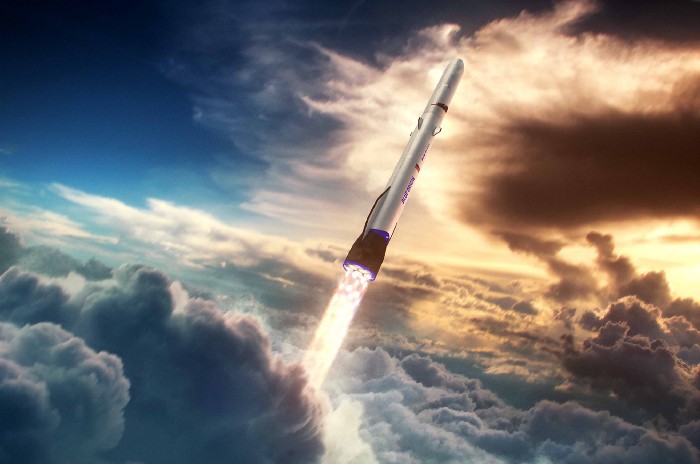 Is the war for space dominance about to escalate?

It’s been seven years since the first SpaceX Falcon 9 rocket lifted its first private spacecraft to orbit, the CASSIOPE science satellite for Canada. In the following years, SpaceX has achieved amazing successes and their wins include,

But how long can this winning streak last?

The inspiration for Blue Origin began when Jeff Bezos was 5 years old. It was 1969 and Buzz Aldrin had just made the first steps on the Moon, an achievement that continues to inspire and frustrate him to this day. It still disappoints Jeff how pathetic our progress has been in space exploration for the last fifty years when only about 600 people have reached space.

Over the years our progress has been held hostage by the physics of rocketry since it takes the expenditure of vast amounts of energy to accelerate an object to orbital velocity. If your automobile was a spacecraft, you’d need to accelerate it to 17,000 miles per hour to get into low Earth orbit. All of this speed comes at a cost. Rockets must consume immense quantities of fuel and channel the energy into thrust at the fiery end to work. The mighty Saturn 5 rocket, for example, could only actually send 4.3% of its total mass into orbit or about 155 tons. This mass included the third stage and the command module. Everything else aboard the rocket was fuel.

The cost of these launches is as immense as the boosters. Let’s say that a rocket costs $100 million dollars to build and launch. This is about the cost of the Falcon Heavy. Only about one million dollars of this is fuel. The rest of this money is complex hardware that is discarded on the ride.

Jeff is seeking to change this by adding reusability to the boosters and reducing their costs by a factor of 100.

He is also placing big bets towards the success of his next enterprise with investments of a billion dollars a year since 2016.

With all the fanfare that SpaceX has reaped in the last five years, Blue Origin has been steadily striking achievements.

It is a well-known cliche that rocket science is “hard” when you are compelled to burn immense amounts of fuel to accelerate a spacecraft to 17,000 miles an hour in exactly the right direction to reach orbit. It is then not very surprising that this is an expensive endeavor costing millions. If you are to have any hope of earning a profit at this, then you need the most thrust for your money and at the cheapest price.

Jeff Bezos earned his billions of dollars on the internet by making internet retail as quick and efficient as possible. It’s no different in spaceflight.

Blue Origin began work on the BE-4 engine in 2011 with the objective of building the next generation of power plant for its upcoming New Glenn rocket.

Today there is a variety of fuels available for rockets and they include kerosene, hydrogen, and hypergolic propellants.

Kerosene is cheap and readily available. Over the decades it has been used to fuel a variety of boosters from the Saturn 5 to the modern Falcon 9 rocket. It provides reasonably good specific impulse. Specific impulse is a measure of the rocket thrust divided by the propellant flow rate.

Liquid hydrogen is another option. It was used to power the Space Shuttle because it provides excellent specific impulse. Hydrogen is problematic because it must be cryogenically cooled and this makes it expensive to manage.

Finally there is hypergolic fuel. This propellant can be stored at ambient temperature and it readily explodes on contact with its oxidizer and almost everything else. While impressive, it’s also frighteningly toxic and corrosive. Over the years it’s self-destructed several missions including a Titan 2 missile in Damascus, Arkansas that exploded over a leak.

Blue Origin engineers decided to innovate by using liquid methane instead. Methane is a cheap fuel that can be stored easily while still providing an excellent specific impulse. Inside the BE-4, the fuel burns clean with minimal soot.

The BE-4 engine additionally enhances its efficiency by consuming all of its propellants. In a conventional engine like the SpaceX Merlin, extra fuel is burned to drive the turbopumps. The burnt fuel along with its energy is then discarded while the turbopump drives the fuel into the combustion chamber. Instead, the BE-4 engine recycles this very hot semi-burnt fuel by injecting it directly into the combustion chamber. This staged combustion cycle is much more efficient than the gas generator cycle but it’s much more elaborate. Turbopump exhaust gas is corrosive and capable of reducing conventional alloys to ash. Engineers use specialized alloys that resist the corrosive gas.

Blue Origin intends to build the engine for the cost of $6-$7 million dollars a piece and to return the investment by reusing the engine in as many as 100 flights.

Next year the United Launch Alliance intends to launch its new heavy-lift Vulcan rocket from Florida using twin BE-4 engines.

In 2011 Blue Origin took its first trek into space with the New Shepard rocket. This rocket lifts off vertically on BE-3 methane fueled engines and then climbs supersonically to the edge of space. Then at its apex of flight, the vehicle ejects a capsule and returns to Earth vertically under the power of its BE-3 engine. The capsule is intended to ferry passengers into near space and then return to Earth on parachutes.

During the last nine years, the New Shepard booster has launched a dozen times and landed eleven times. The first vehicle was destroyed on landing five years ago. The two following missiles have all launched and landed successfully. These flights included a successful in-flight abort where the capsule (H.G Wells) ejected from the booster while the engines were still firing at supersonic speed.

Amazing, the third New Shepard rocket didn’t break apart in the experiment and landed without incident.

Blue Origin is presently building the next rocket Shepard rocket and they are taking reservations for future tourist flights. These flights are intended to carry six passengers at a time.

The New Shepard rocket is only 59 feet tall and capable of propelling six people in a capsule on a suborbital flight. The new booster New Glenn is much more ambitious. This new vehicle stands at 322 feet tall, nearly the height of the vintage Saturn 5 rocket. With a diameter of 23 feet, half of the New Shepard rocket could be placed inside.

Sometime next year the New Glenn’s seven BE-4 engines are going to flare to life like a thundering angry dragon and propel the booster into the sky. Then three minutes into the flight the first stage is programmed for main engine cut off (MECO) and uncouple from the rocket. Using the stage’s residual fuel it will then glide in for a propulsive landing on a ship much like with the Falcon only much further downrange. While the Falcon 9 only needs about 420 miles to land, the mighty Glenn needs 621 miles. This is equivalent to lifting off in Denver and landing in Kansas City.

With the first stage descending behind, the twin BE-3 engines light and continue the push towards orbit.

Then with orbit achieved, the New Glenn can dispatch the spacecraft. With its massive 458 cubic meter volume and 45 tons to low earth orbit (LEO) capacity, the vehicle can launch two heavy satellites at a time replicating the feature of the long successful Ariane 5. It can further propel up to 13.6 tonnes into Geostationary orbit. With its mission complete, the second stage is expendable and fated for a fiery reentry into the atmosphere.

Following recovery, the New Glenn rocket is refit and could potentially be flown for 25 times before being expended.

Jeff Bezos founded Amazon twenty six years ago with the ambition of disrupting internet commerce at the daybreak of the internet age. Despite epic odds, he succeeded on account of his willingness to undersell competitors at the expense of losses. Bezos additionally won as he endeavored to make shopping as convenient as possible.

You shouldn’t expect the game plan to be any different with Blue Origin.

From their founding, they have been secretive about their products and pricing. While there exists no official figures, the speculation is that a launch could run between $66-$100 million dollars. Unofficially, it is reasonable to speculate that the price is less than any of its competitors.

Plus for another twist, they plan to finally treat missions like it’s an airline schedule. If two spacecraft are on the schedule for launch and one is unavailable, then New Glenn is to lift off anyway. Presently eight flights a year are planned and customers can still fly solo at no extra charge if another spacecraft misses the deadline.

Last year the Canadian telecom Telesat arrived at an agreement to launch their new fleet of spacecraft in low earth orbit aboard an unspecified number of New Glenn flights. This order comes on top of five flights previously ordered by Oneweb for their internet service satellites. Then there are three launches to geosynchronous orbit for Eutelsat, JSAT, and Mu Space.

Risk is overrated. In business the victories are awarded to the leaders that are most willing to chart the cautious route. Twenty years ago nobody expected Amazon to disrupt the retail market, and yet it did. It is the pioneers that write the stories and the settlers that sell them.

Dave Rauschenfels I began my career in manufacturing as a tech analyzing the origin of production problems. Then after ten years I realized that I was only investigating part of the problem. Today I am a freelance research analyst and ghostwriter for consulting companies. My work has also been published in Curious Droid and DisrupterDaily.
« Eliminate These Application Entry Points To Stop Hackers Cold
Deep Learning amid Increased Physician Administrative Workload »