Eco-Friendly Offices Give People and Plants All the Power 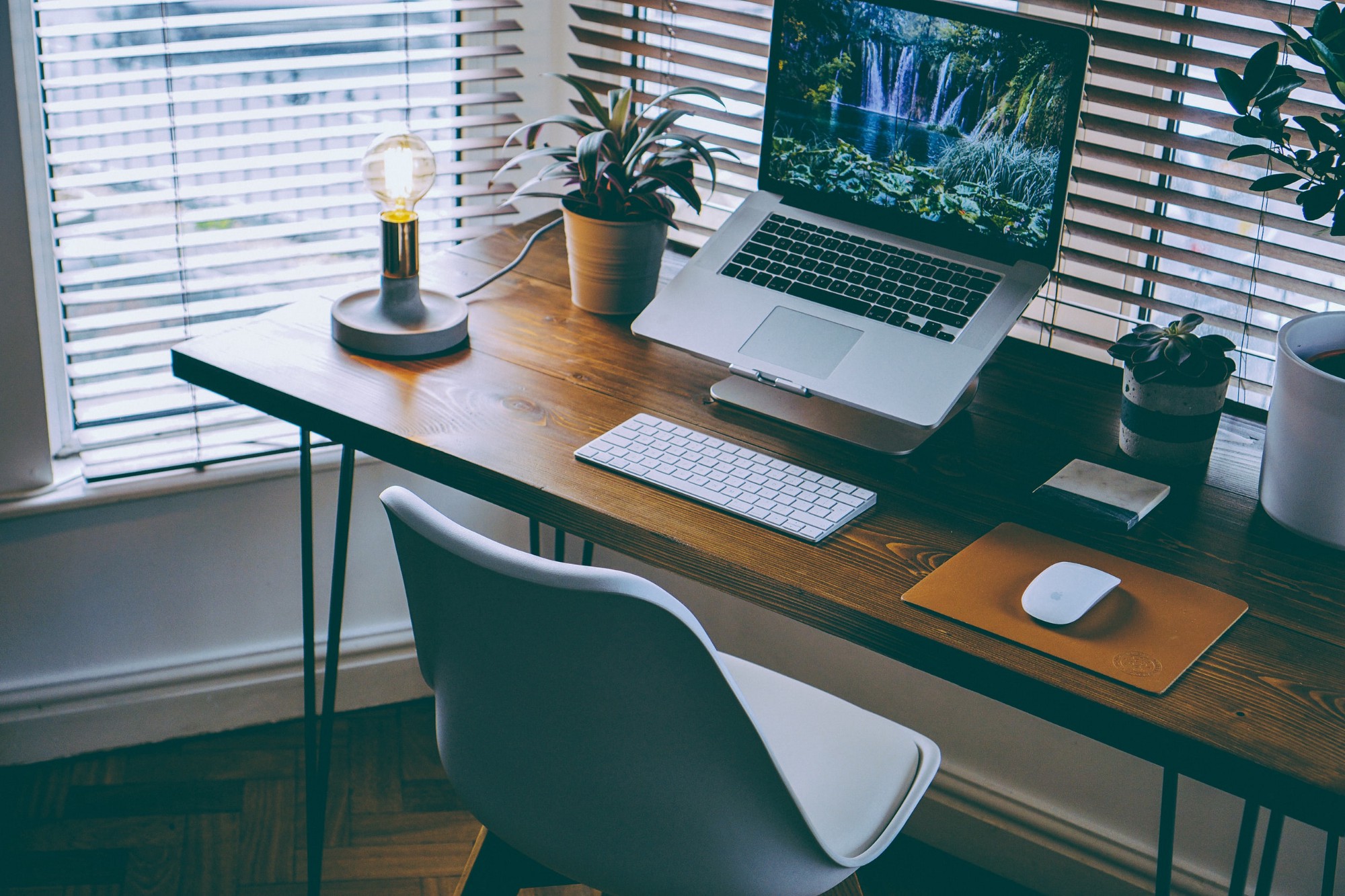 Working from home saves energy and brings peace of mind

Not long after the first bulb came alive in Thomas Edison’s workshop, people began to ponder one of life’s great questions: Should you turn out the light when you leave the room?

With more people toiling at home, that is a lot of light bulbs to consider. Add to that other energy-efficiency and environmental issues, and the home office has many questions to resolve.

Sherry Holub and Carol Stephen gave it their best shot. Holub is a creative director who designs custom websites while Stephen is a social media manager. Both have extensive experience working from home.

How to succeed when there’s no place like home

Balance work, life and sanity as you help the environment

Besides lights, there are other appliances to leave on or switch off when leaving the office. For instance, putting a laptop to sleep can hold down power waste while not having to return and signing back into Twitter, Facebook, LinkedIn and other programs.

As for lights, one argument is that the “start up” burst of energy consumes more energy than leaving the lights on continually. That turns out to be a bad notion that no less than the Mythbusters disproved. In short, turn off the lights.

“I turn off the ceiling fan and tower fan,” Holub said. “The computers are set to sleep after 30 minutes.

“The air conditioning alone doesn’t quite cut it up in my home office above my garage,” she said. “Whoever put this system in really should have put two vents up here. Alas, they did not.”

Stephen also turns off lights and lets the laptop rest when she leaves, not having much else in the way of appliances.

Those who digitize rather than print documents also see savings.

Occasionally, something might have to be notarized or printed out before meetings.

“Almost everything work-related is digital,” Holub said. “The one exception is we print out lists of clients on monthly maintenance. It’s easier to have the paper in front of you to remember them all. Almost anything I print is personal, such as photos and eBay packing slips.”

Sometimes pets get the better end of resources.

“I’ve been trying to scan documents and sign them online, if needed,” Stephen said. “There’s a ream of paper that the cat likes to sit on, but it barely gets used.”

Remote work is the exception that might become the norm

According to the Environmental Protection Agency, only 18 percent of e-waste is recycled. That includes old laptops and smartphones.

For its part, AT&T accepts old smartphones for discounts on upgraded phones. Some Lions Clubs accept old phones for recycling with proceeds going to buy flip phones to donate to troops stationed overseas.

“The e-waste thing can be difficult, depending on your area,” Holub said. “A lot of recycling places simply won’t take it. With the phones, I try to donate them to online places. With computers it’s tougher.”

In Stephen’s neighborhood a charity recycles e-waste for free.

“We make a pile,” she said. “E-waste goes there whenever the pile topples over.”

Several utility companies send regular reminders about power use, along with suggestions for conservation.

“Pacific Power is pretty good about that,” Holub said. “They have a kind of neat program where you can send away for a free box of things like L.E.D. lightbulbs. So, I did that. I got a new thermostat after seeing a little write up about them in their flyer.

“Have you ever tried those power-saving power strips?” she asked. “I always wonder how effective those really are.”

“They often have good suggestions,” she said. “For example, unplugging electronics saves about $20 per year, according to our Pacific Gas and Electric tips list.”

The power company recommends setting the thermostat close to 80 degrees fahrenheit in the summer to save electricity, but people have different comfort tolerances. One key metric: If you’re sitting at your laptop and start to feel sweat running down the back of your neck, it’s too hot.

Working at home: Your castle within a castle

Toiling away from the office requires a different mindset

“I seem to have settled on 75 degrees this summer and just leave it there,” Holub said. “As it starts to get cooler, I’ll adjust that to 78 for air conditioning and then waffle between 68 to 70 for heating in the winter. I finally got my gas fireplace fixed, too, which will supplement that.

“The first $400-plus gas bill after coming to Oregon from Southern California helped me make that temperature determination faster,” she said. “That was in 2007. We’d decided to just set the thermostat to 78 because we were not used to temperatures under 40 outside. Gas prices fluctuate, and that year must have been higher.”

Now that she is used to them, Holub knows winters are pretty mild.

“That first year we definitely got the ‘Welcome to Oregon’ winter,” Holub said. “Even locals were like, ‘Huh, it’s much colder than it normally is.’ It even snowed 8 inches, which was totally novel. We had fun because it melted the next day.”

Stephen usually has the benefit of summers not too hot and winters not too cold.

“The thermostat is set at 63 to 64 in the wintertime,” she said. “In the summertime, we mostly use fans to cool off. The house is now insulated, which helps maintain even temperatures.”

A new law in Maine aims to take the cost burden of recycling away from taxpayers to manufacturers, which could affect small businesses.

Emerging from a year in emotional wilderness brings caution

“Nearly all European Union member states, as well as Japan, South Korea and five Canadian provinces, have laws like these and have seen their recycling rates soar and their collection programs remain resilient, even in the face of a collapse in the global recycling market caused in part by China’s decision in 2017 to stop importing other nations’ recyclables.

“Ireland’s recycling rate for plastics and paper products, for instance, rose from 19 percent in 2000 to 65 percent in 2017. Nearly every E.U. country with such programs has a recycling rate between 60 to 80 percent, according to an analysis by the Product Stewardship Institute.

“In 2018, the most recent year for which data is available, America’s recycling rate was 32 percent, a decline from a few years earlier.”

“I know recycling had a huge effect in the Pacific Northwest,” Holub said. “It’s odd that we were basically treating recycling as ‘someone else’s problem’ and only had centers to sort it, not actually do it.”

As much as possible, after printing one-sided documents, the back sides are handy as notepaper. Green America notes that recycled paper use saves resources and reduces the paper industry’s impact on the planet. Using 100 percent recycled copy paper instead of 100 virgin virgin fiber paper results in many savings:

Remote workers: Out of sight, not out of mind

Teleworking has obvious energy savings and psychological benefits. Gas lasts much longer when telecommuting, while not contending with rush-hour traffic truly is a breath of fresh air. There is also the time saved from only having to travel from the bedroom to the home office.

“For those who didn’t have a home office before, they might notice a slight increase in their power bills simply because they’re working from home,” Holub said. “Where it would save is on the other end: business locations.”

Having a plant or two in the office can help boost creativity, although there is not a small risk to plants when toilers neglect to water them.

“Pets cannot be trusted to not eat them,” Holub said. “On the upside, we live in Oregon where we’re surrounded by greenery outside.”

Jim Katzaman is a manager at Largo Financial Services and worked in public affairs for the Air Force and federal government. You can connect with him on Twitter, Facebook and LinkedIn.

Jim Katzaman is a manager at Largo Financial Services. A writer by trade, he graduated from Lebanon Valley College, Pennsylvania, with a Bachelor of Arts in English. He enlisted in the Air Force and served for 25 years in public affairs – better known in the civilian world as public relations. He also earned an Associate’s Degree in Applied Science in Public Affairs. Since retiring, he has been a consultant and in the federal General Service as a public affairs specialist. He also acquired life and health insurance licenses, which resulted in his present affiliation with Largo Financial Services. In addition to expertise in financial affairs, he gathers the majority of his story content from Twitter chats. This has led him to publish about a wide range of topics such as social media, marketing, sexual harassment, workplace trends, productivity and financial management. Medium has named him a top writer in social media.
« 4 Principle Challenges of Blockchain in the Financial Industry
So My Startup Is Not Growing As Fast — 5 Practical Tips To Still Do A Successful Fundraise »