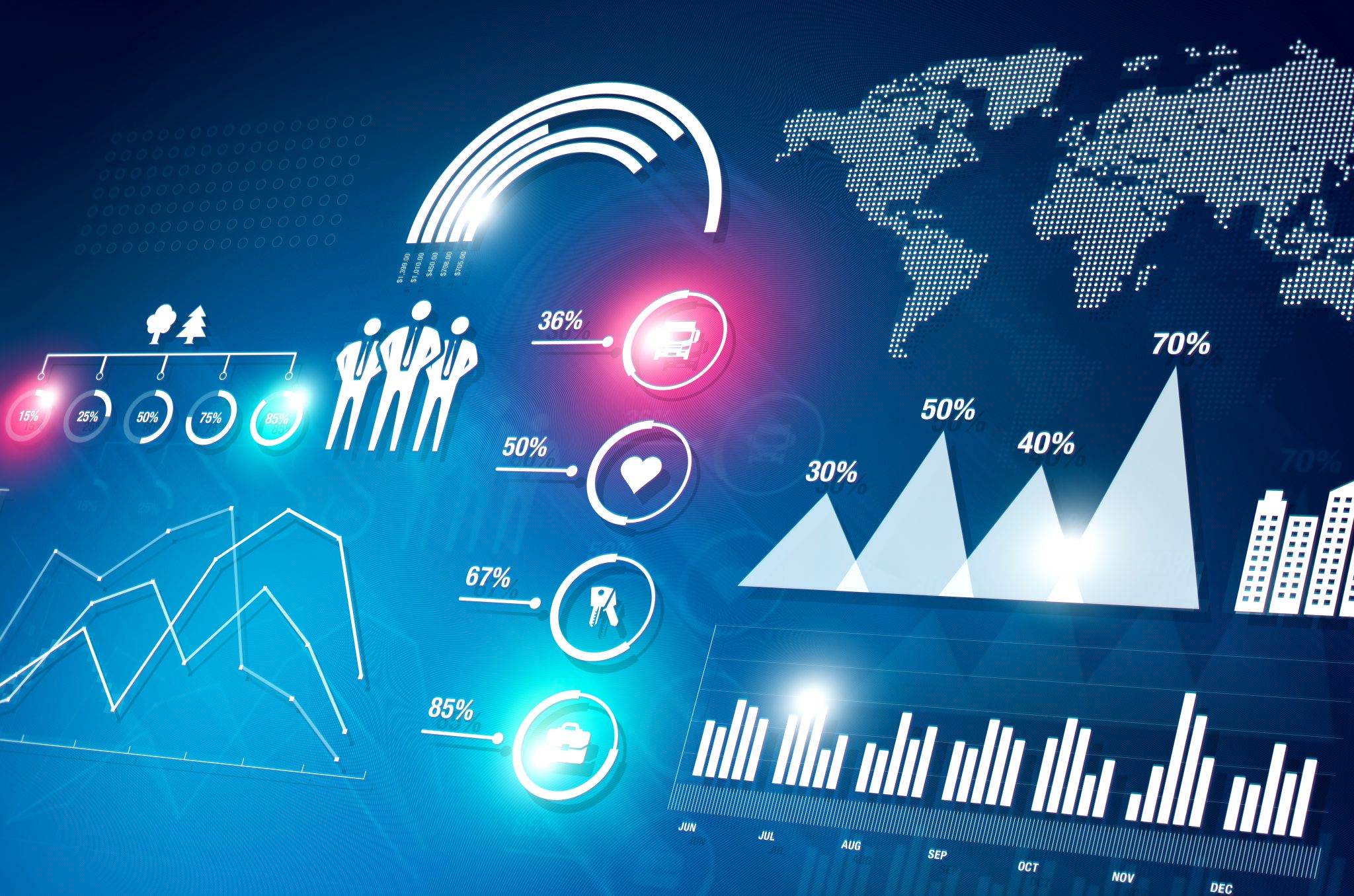 And time’s up as everybody heads into the weekend with the summer season kicking in full gear. Usually this is the slowest time of the year for the financial markets but seems like we are going to have an eventful season this time around. Equities continue to tumble in Asia in the wake of increasingly Protectionist policies from U.S. while the American Stocks continued to be resilient. The corrective moves in the Greenback came as a welcome sign for emerging Economies while Cryptos rebounded smartly this week from recent lows.

Good week for the Crypto coins overall with a bounce off the lows which has held at the time of this writing. Things continued to evolve in the Blockchain community at a brisk with a mix bag or good & bad news – you can say one two steps forward & one step back. So far the price action from the lows points to a temporary bottoming, whether it translates into a significant corrective move will be determined in the coming days. 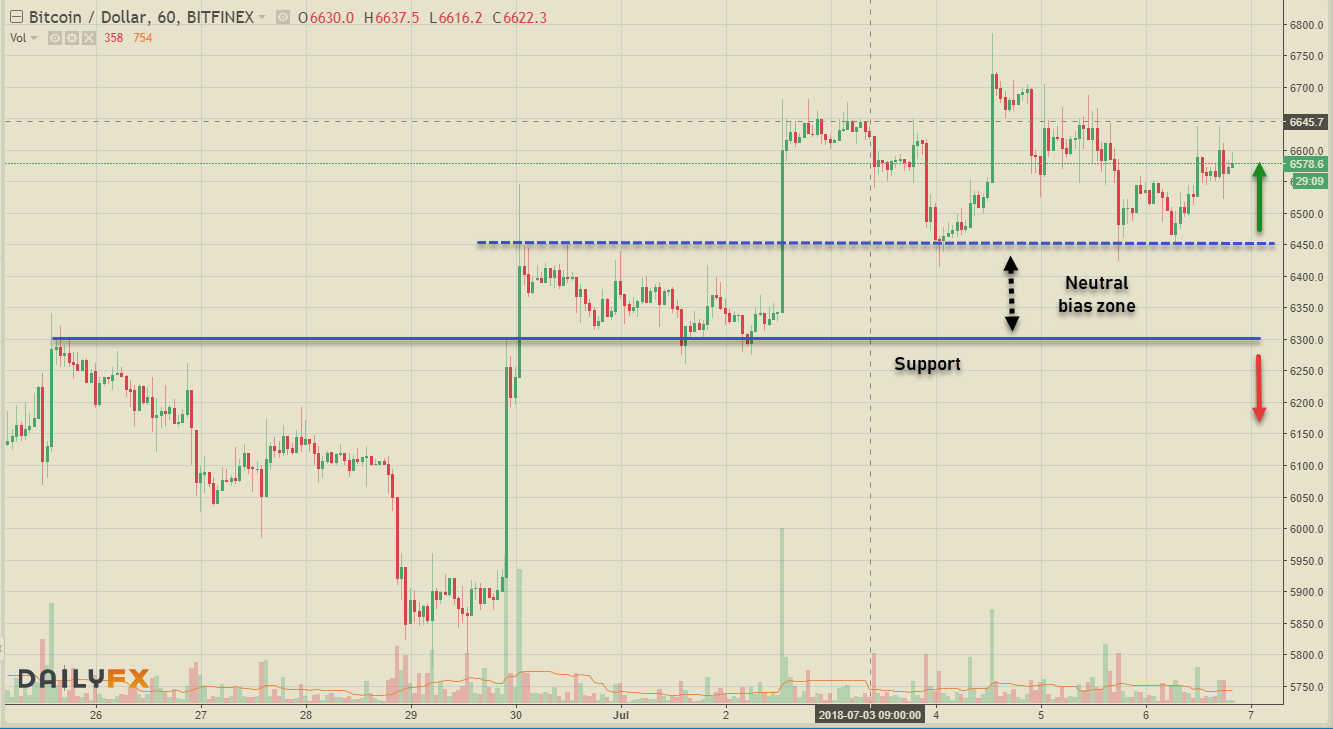 Looking at hourly chart of BTC you can see that the support zone of $6300-$6450 has held up well so far above which the bullish bias continues. We might see come extended consolidation below $6450 but as long as the $6300 level holds expect the Crypto kingpin to take a stab at he previous high of $6800. Still looking to overcome that Psychological level of $7K. The CCI30 Crypto index value rebounded to @ 5659.84 (real-time) from 5334.69 last week with -62.67% and +2.09% reading for YTD and MTD respectively. MarketCap for Cryptos continues to improve sitting @ $270 billion improving from $256.8 billion last week – Bitcoin dominance fell marginally to 42.5%.

Following is a dose of some of the major headlines from Cryptoverse this week:

Here’s a nice info graphic about the two most common protocols used in Cryptos: 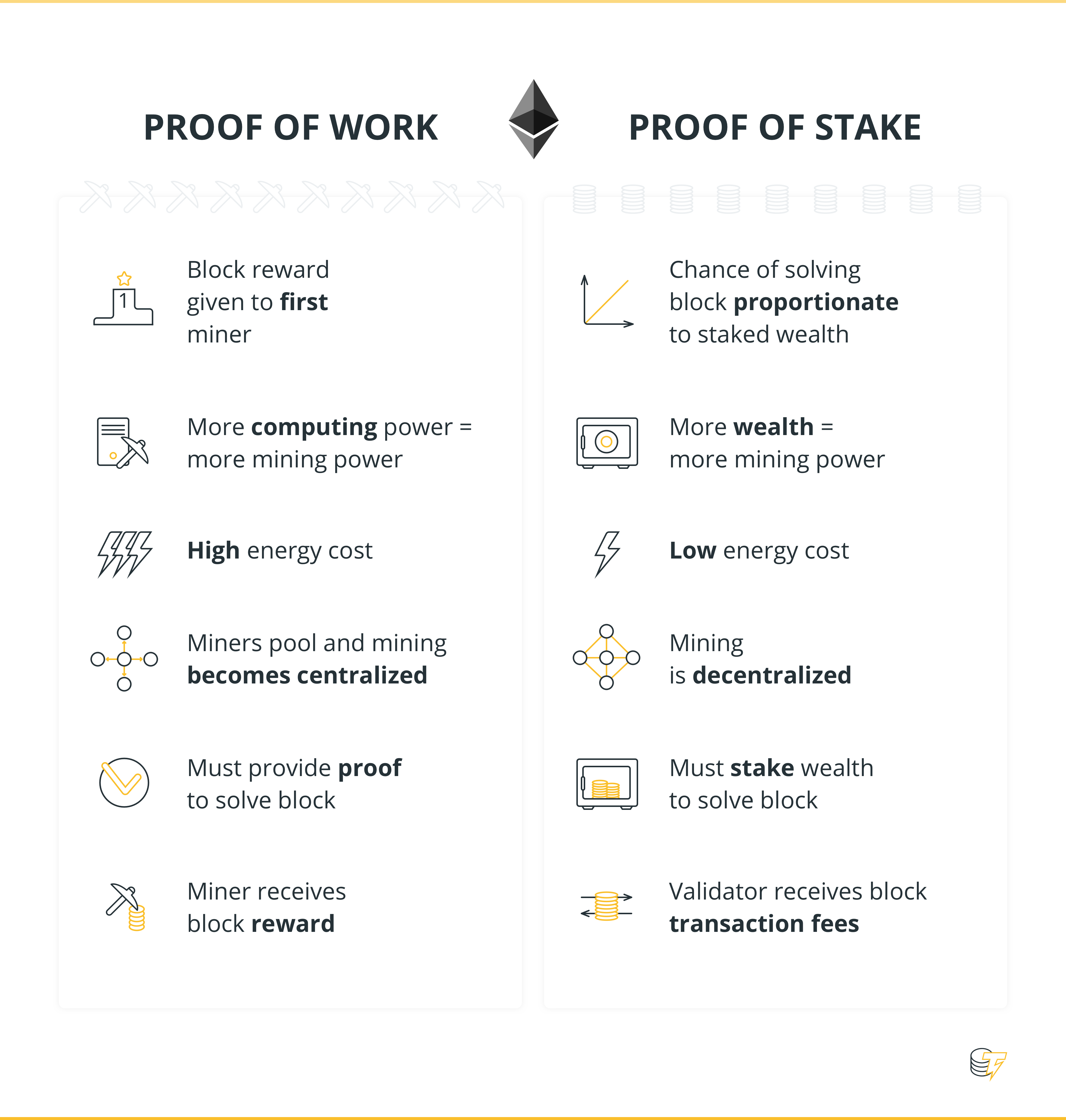 The week started with the Chinese Yuan falling to the lowest level since the devaluation of 2015 but rebounded to end the week with the Chinese central bank announcing to keep the currency stable & China’s announcement that it is not going to revert to currency manipulation in the current Trade standoff with the U.S. The Greenback was however on in a corrective mood with the Dollar Index possibly looking making a double top. The NFP beat was good for risk currencies as well with the BoC rate decision & U.S. & Chinese CPI data due next week to determine the direction of the Dollar. 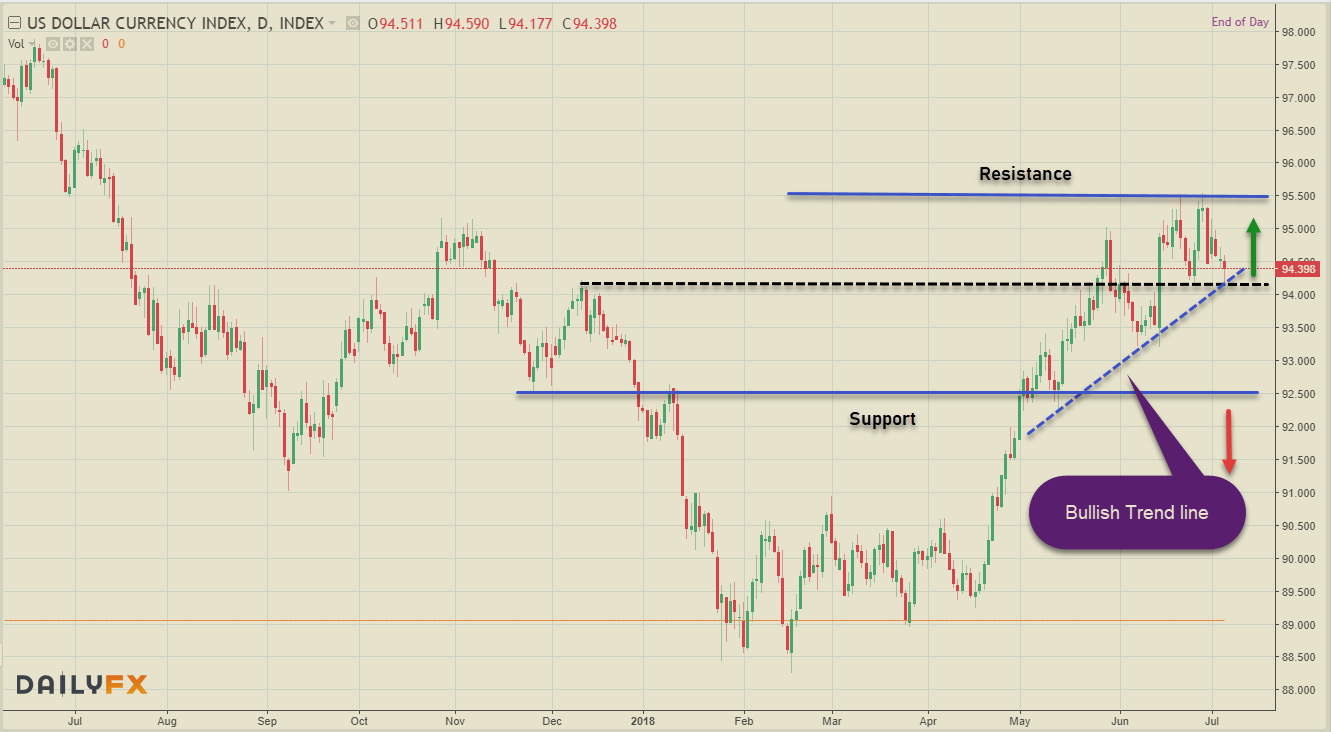 Analyzing the DXY chart the double top seems to be a distinct possibility at this point with the rejection of the price @ 95.50 twice. Having said that the confluence of the Bullish trend line & the ST support of 94.20 will keep the bullish trend in tact. Any move lower than this would extend the correction to 93.20 & 92.50 in extension but as long as the latter support holds expect the Index to stay constructive.

Looking at some the major pairs EURUSD continued to recover from the losses after stronger German data, improved political situation & hint of ECB raising interest rates earlier than expected. GBPUSD closely followed Euro’s path despite the fact that BREXIT fears continue to toil UK markets – be careful of any long-term positioning in this pair. The commodity pairs bounced nicely off the lows as well this week, however, USDCAD has been the best performing of the lot down almost 300 pips from the high of 1.3385 on the back of strong employment data and oil prices recovering. USDJPY has held up well above 110.00 with the strength in the U.S equities.

A blast from from the past, the original Green Dollar bill: 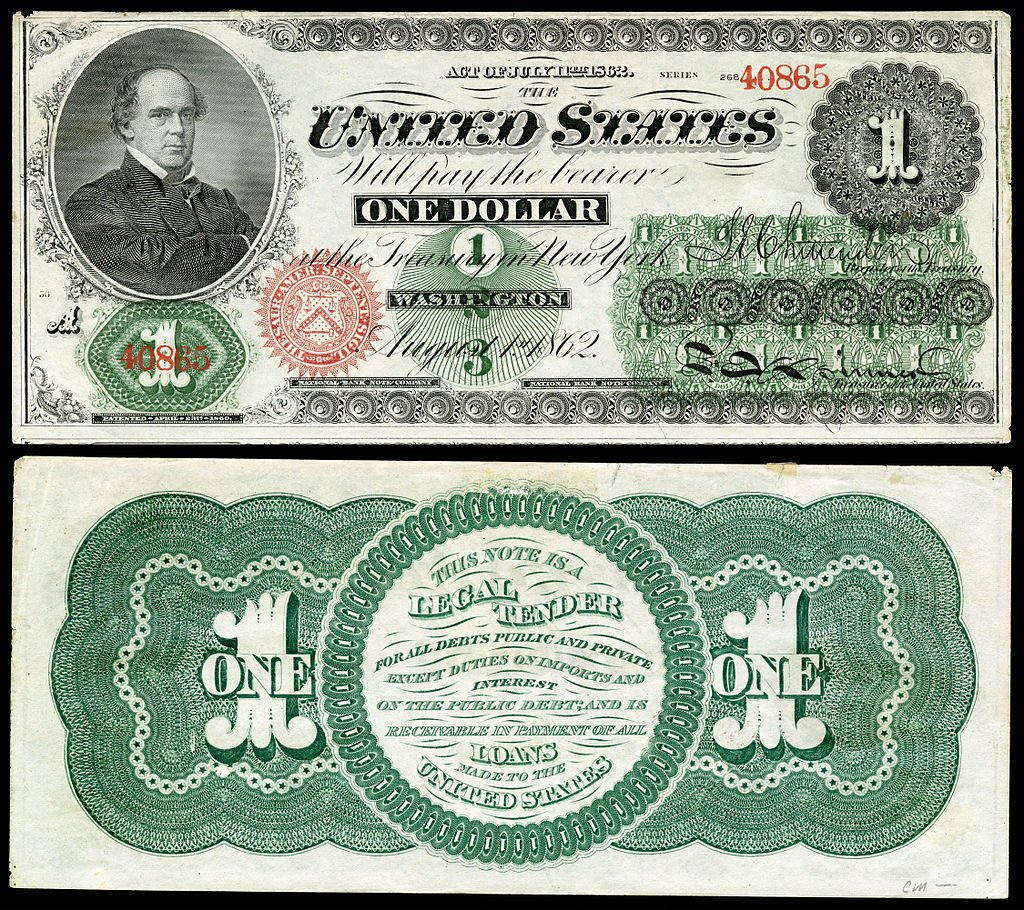 Shares in Asia dropped to a nine month low as the trade war becomes official with the U.S firing the latest shot & imposing tariffs on $34 billion of goods. China’s Commerce Ministry spokesman, said at a press conference that Beijing’s retaliatory tariffs will become effective “immediately” after the U.S. acts. The diversion between the performance of the U.S equities & Asian/emerging markets continues. While the Global markets are rattled & roiled over the Tariff situation U.S indices continue to show resilience to any sell off. 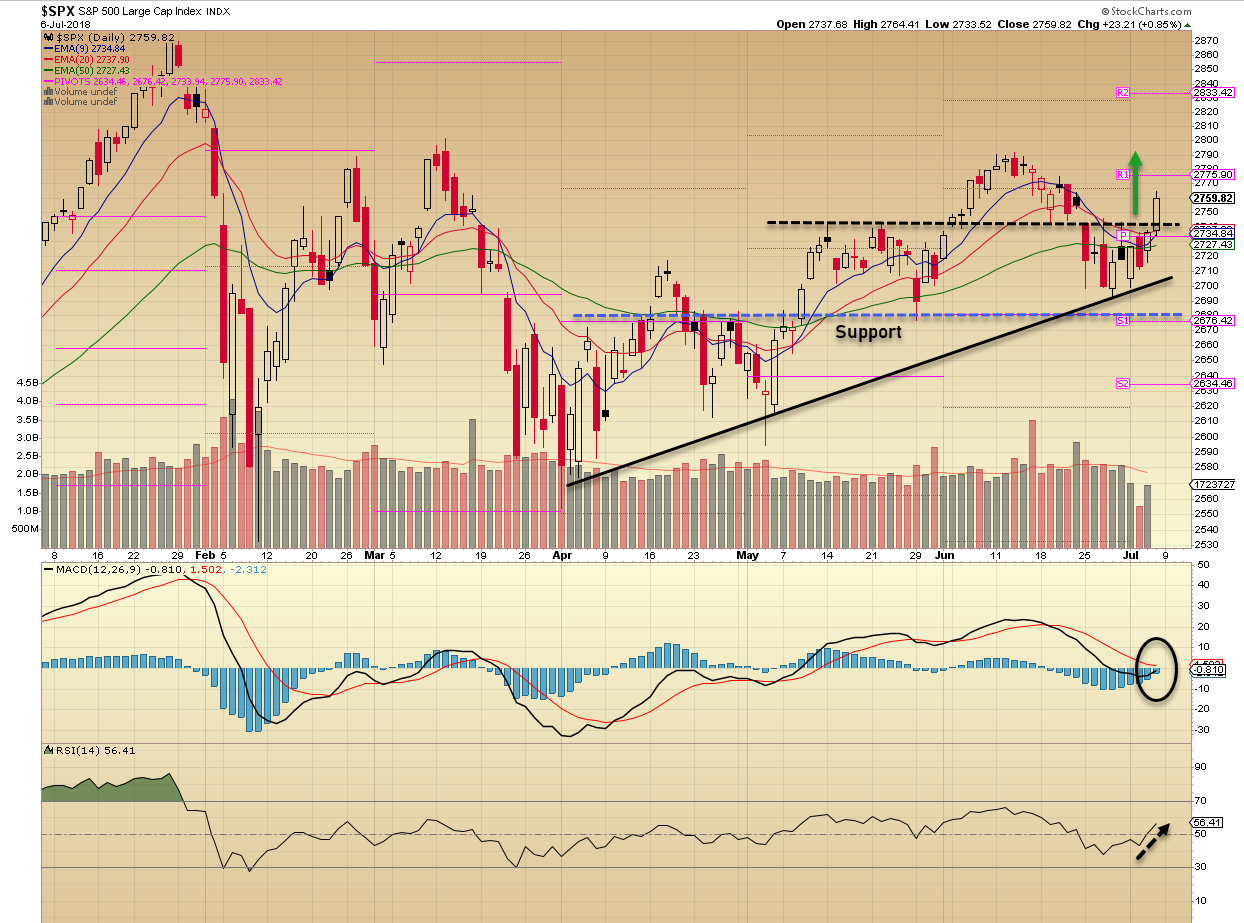 Evident from the S&P 500 chart above the index yet again managed to bounce off a higher low to end the week on a positive note. The index seems poised to head to 2775.90 & 2791.43 (previous high) in extension as long as the ST support of 2741.62 holds. Bullish continuation seems to be in place with the Support of 2680 holding for now. Let’s view the weekly numbers from the Major Markets around the world.

And here we have the list of Top Importers: 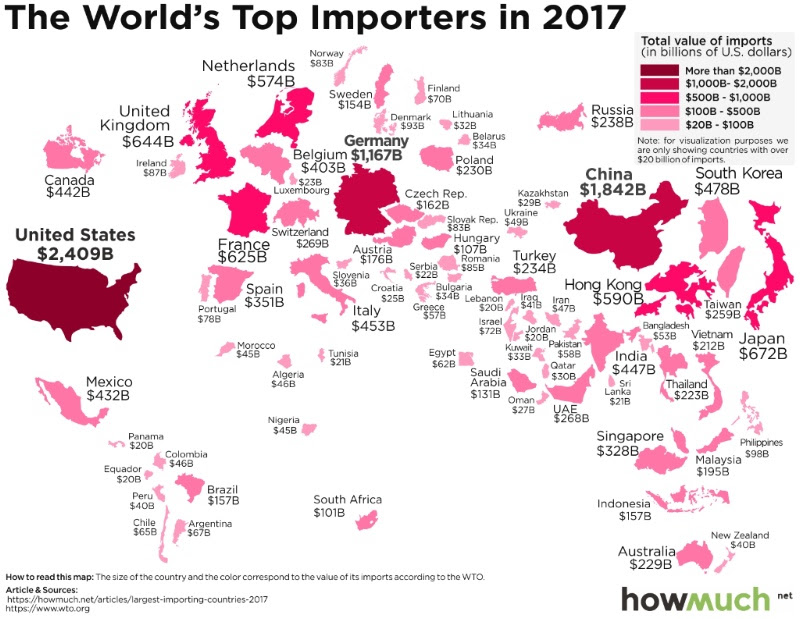 And finally a couple of fun facts for you from last week in history (#Investopedia):

June 29, 2007: The first iPhone was released. It earned itself the nickname “Jesus Phone” because so many people were amazed by its capabilities. When Apple discontinued it in June ’08, sales reached over $1.4m. Today, over 1b iPhones have been sold worldwide.

July 2, 1962: On this day, Sam Walton opened up the first Walmart store in Rogers, Arkansas. With one of the most successful business strategies of all time, the 3 Walton decedents are in the Forbes Top 15 for richest people in America.

July 6, 1785: Ever wonder about the origins of that green paper in your wallet? On this day, the Continental Congress adopted the dollar as the monetary unit for the US to separate themselves from British influence during the American Revolution. 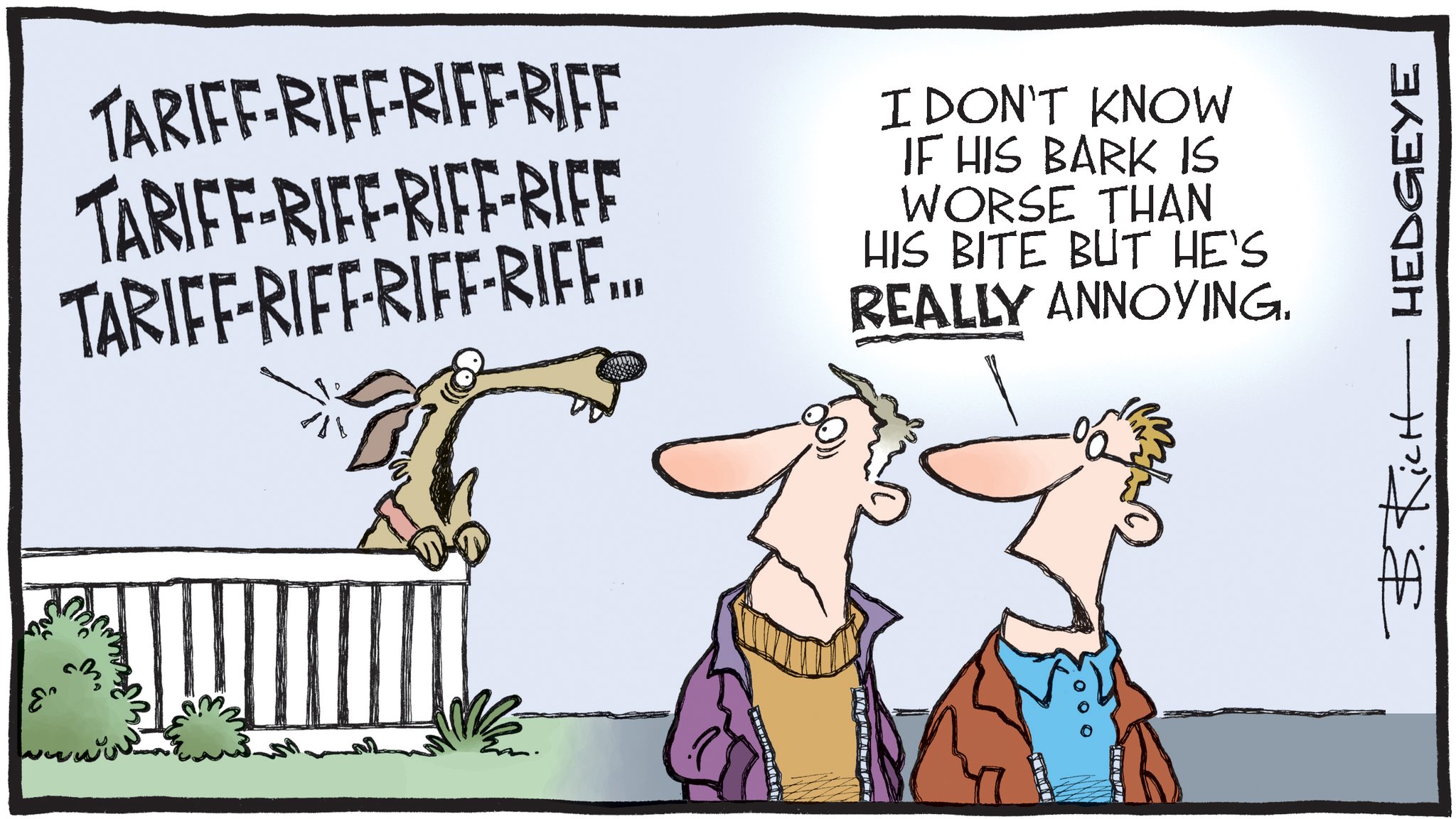 Links to similar reads: Trading USD Majors in Forex, Jack of all trades… Master of one!, Bullish Posturing in Cryptos — ST moves

Faisal is based in Canada with a background in Finance/Economics & Computers. He has been actively trading FOREX for the past 11 years. Faisal is also an active Stocks trader with a passion for everything Crypto. His enthusiasm & interest in learning new technologies has turned him into an avid Crypto/Blockchain & Fintech enthusiast. Currently working for a Mobile platform called Tradelike as the Senior Technical Analyst. His interest for writing has stayed with him all his life ever since started the first Internet magazine of Pakistan in 1998. He blogs regularly on Financial markets, trading strategies & Cryptocurrencies. Loves to travel.
« Bullish Posturing in Cryptos – ST moves
Infographics Digest — Vol. 3 »