Summer is usually a slow time for the financial markets with range bound moves specially in the Forex markets but all that seems set to change with the collapse that we saw in the Turkish Lira last week and the impending contagion concerns associated with it. I am a big believer in data driven cyclical factors in the global economy, but there is always a trigger which sets the wheel rolling for the next phase. Most of us still remember the Greek sovereign debt crisis which kicked off in 2010 following the financial markets meltdown of 2008-09. That one instance alone caused major ripples in Global financial markets, 3 IMF bailouts & Europe still reels on the fallout from that financial catastrophe. We might just be on the brink of another one.

The chart below shows how the Turkish Lira has been responding to the political & economic events in the past 3-4 months. Economic factors got compounded with the political developments and then we saw a complete collapse of the Turkish currency, which now stands at a loss of 90% of its value in the past 12 months alone.

Turkey is a member of the elite G-20 group of economies and has been performing exceptionally well in the past decade with its liberal economic policies, integration with the global economy & somewhat stable political environment. Things however have started to take the turn for the worse recently. Emerging economies have had a rough 2018 with falling stocks markets, weakening currencies & a decrease in global demand. Turkey on the other hand has its own set of problems on top of these – rising inflation, a ballooning private external debt & political instability since the coup of 2016. And if all of this was not enough recent spats between the U.S & Turkey over the release of an American pastor proved to be the tipping point for an already precarious situation for Turkey.

Here’s why the fall in Turkish Lira is such a big deal: 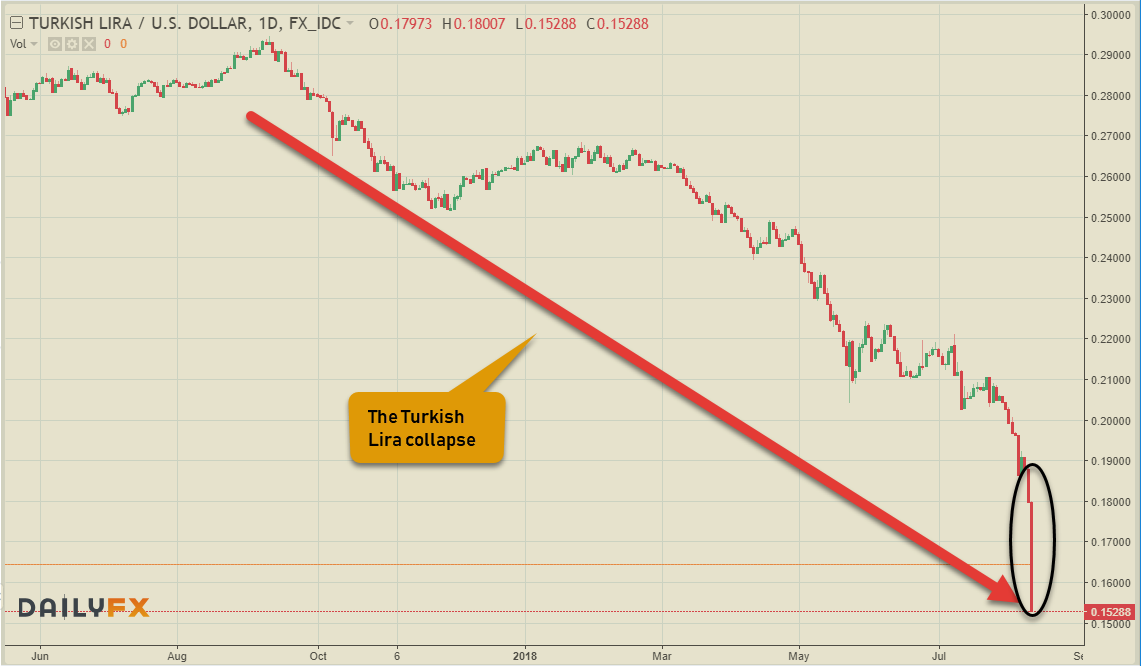 The problem however doesn’t end there. It’s the contagion effect from the fallout of the Turkish Lira crisis that has the financial markets all jittery & shaky. I guess this event has refreshed the memories of the last Greek debt crisis & how it spread to Europe & other parts of the world. Although it is too early say but the reaction in the Global Equities & FX markets certainly points in that direction. Take a look first at the move in Dollar Index which has resumed its bullish trend after the recent consolidation. This is important since risk off moves in the financial markets are always accompanied by the appreciation of the safe haven & reserve currency of USD. So it’s not just the Lira but the whole basket of currencies falling against the Greenback. 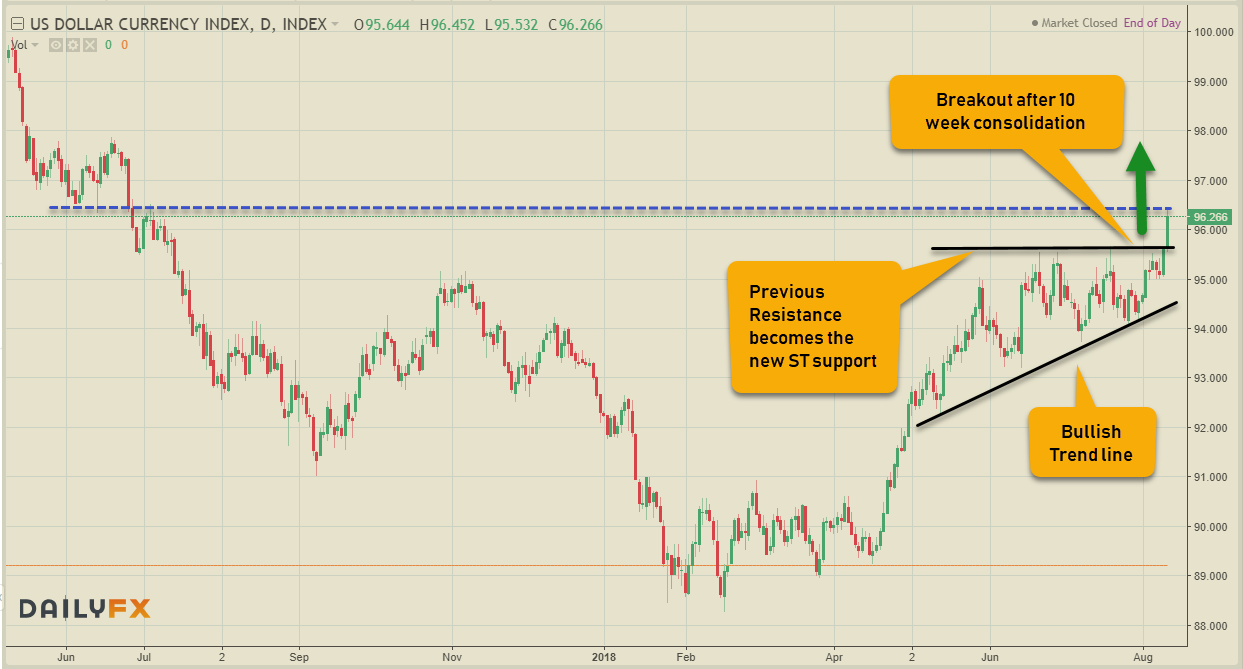 The contagion effect stems from the fact that there is significant exposure of European banks such as Spain’s BBVA, Italy’s UniCredit, and France’s BNP Paribas in particular, according to report from Financial Times. On another account Bank for International Settlements (BIS) has reported the following amounts owed by Turkish borrowers to International lenders.

Regulators and Financial Authorities in Europe & around the World are worried that such massive depreciation in Turkey’s currency may lead to it defaulting on the loans causing an undue strain on the lending institutions & spreading the contagion. An emergency loan from the IMF, capital controls, interest rate hike & resolving the political dispute with U.S are some of the steps that could be taken by Turkey to resolve this problem in the Short term & long-term but they come at a steep price and they almost always prove unpopular with the general public.

Faisal Khan Faisal is based in Canada with a background in Finance/Economics & Computers. He has been actively trading FOREX for the past 11 years. Faisal is also an active Stocks trader with a passion for everything Crypto. His enthusiasm & interest in learning new technologies has turned him into an avid Crypto/Blockchain & Fintech enthusiast. Currently working for a Mobile platform called Tradelike as the Senior Technical Analyst. His interest for writing has stayed with him all his life ever since started the first Internet magazine of Pakistan in 1998. He blogs regularly on Financial markets, trading strategies & Cryptocurrencies. Loves to travel.
« Augur, Assassination and Morality on the Blockchain
DDI Blockchain Weekly (August 6th – 12th) »