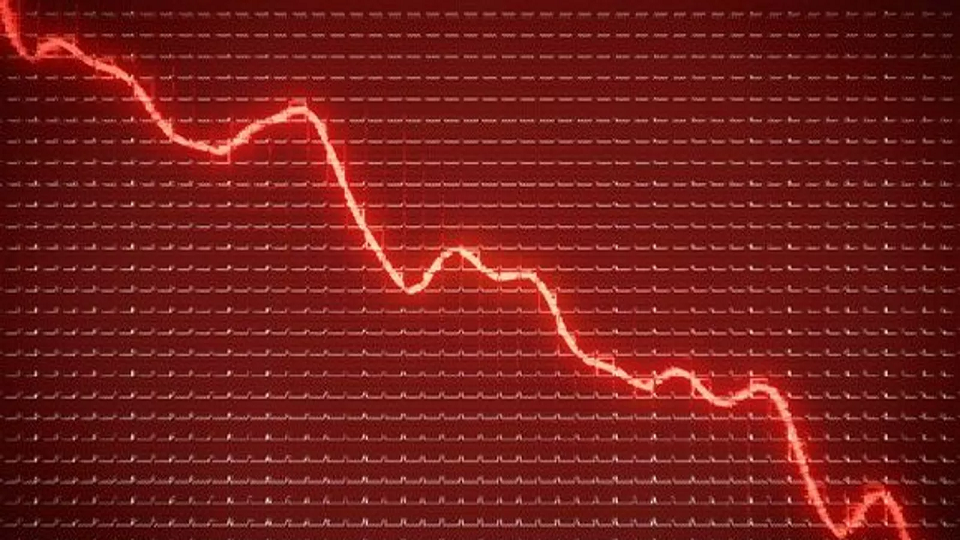 The week started off on optimism of a trade truce between the two biggest economies of the world (U.S/China), but the dead-cat bounce in the Equity markets quickly reversed direction to end the week lower with an added worry of a Global Economic slowdown as dictated by the data that came out of China & EU. Cryptos grind lower all week Bitcoin (BTC) trading below $3300 at the time of writing. Greenback on the other hand held on to its strength against its counterparts with the risk off sentiment persisting. Let’s quickly review some weekly numbers from the markets before moving on. 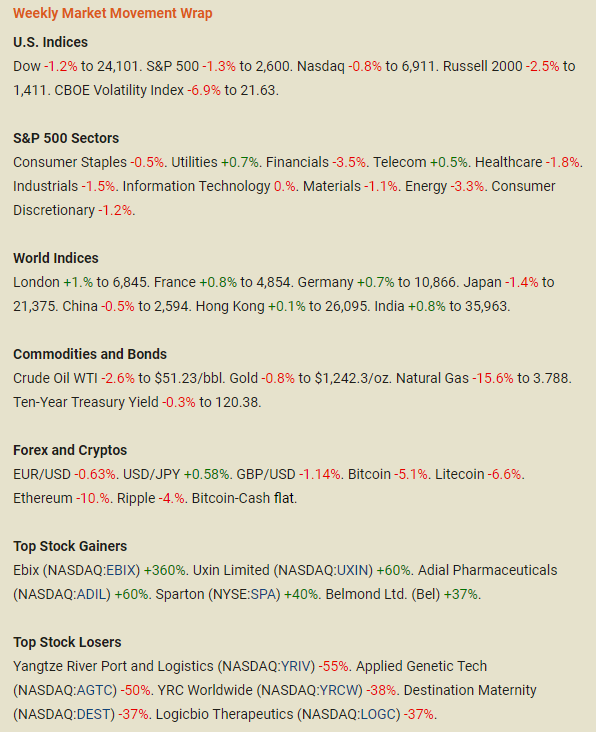 We have yet to see the bottom in Cryptocurrencies as so many market pundits have been calling for in the last few months. The speculation is going to continue but we can do is to look at some technical levels from the charts to figure out what would confirm that. Bad news for the Cryptos continue to outpace the good ones putting further pressure on the digital assets. The biggest culprit perhaps has been the “hash war” resulting from the split in Bitcoin Cash (BCH), which has lost more than 80% of its value since the controversial hard fork last month. The BCH ABC chain which now trades under the BCH ticker symbol is trading around $75 mark after receding from the peak of $630 reached last month while the its counterpart BCH SV has lost even more trading around $65 mark. Let’s take a look at the BCH daily chart to see the massive fall. 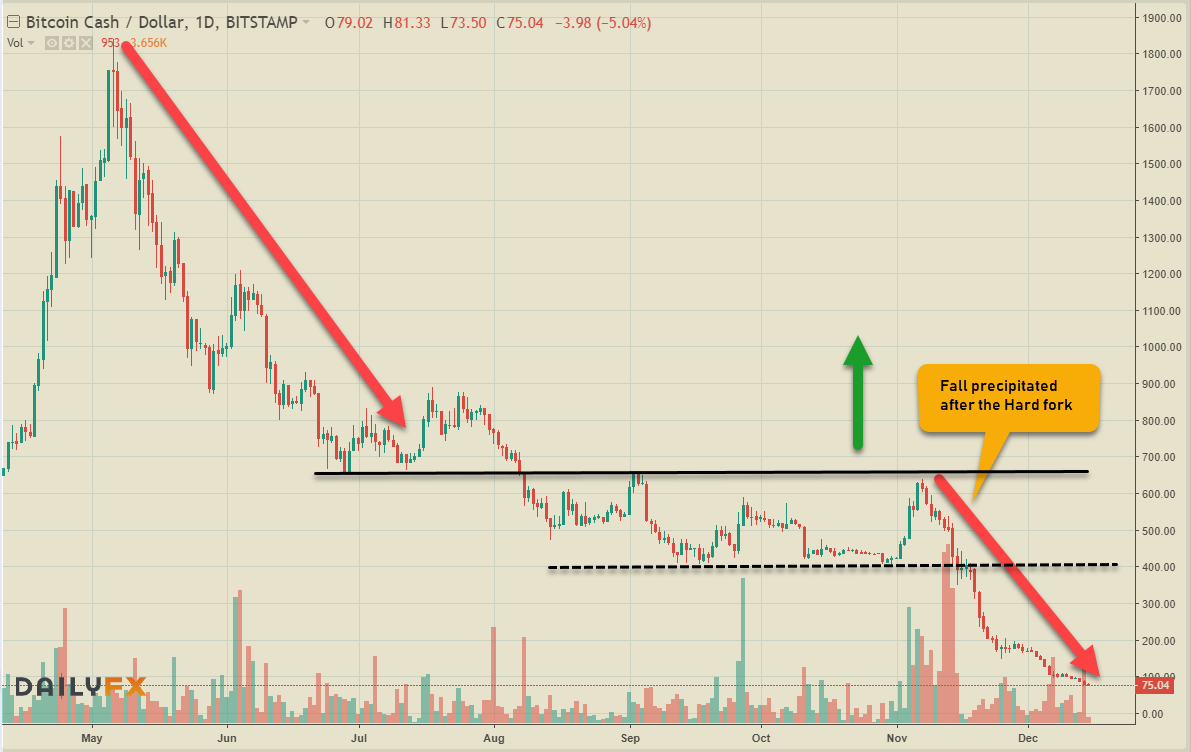 Analyzing the daily chart for BCH, it is pretty evident that it is in a long-term downtrend with the bearish momentum gaining strength. The bias firmly remains to the downside below the previous support now resistance @ $400 beyond which we have a rectangular consolidation channel of $630. Having said that, the second leg of the bearish downtrend is still in play. Apart from this, there was talk of double spending vulnerability on the BCH SV chain by a user who demonstrated it via a video uploaded to Vimeo. The next chart can be taken as good or bad depending on you being a Crypto optimist or pessimist. Although the funding for Crypto projects has continued to remain healthy in 2018 as compared to the previous years albeit at a much lower levels seen in 2017. 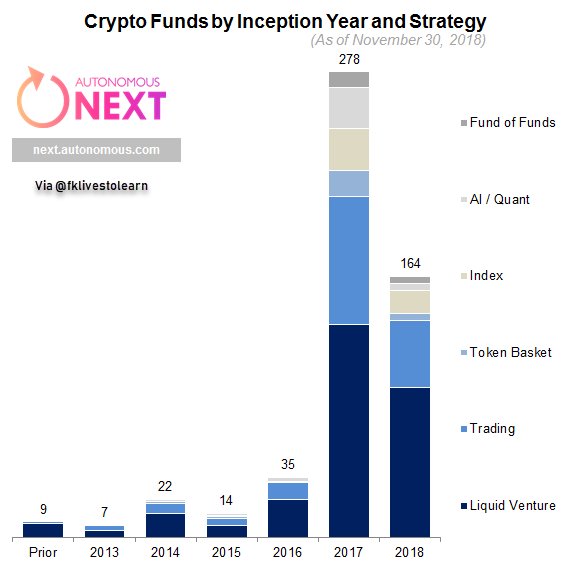 Taking a look at the hourly chart for the Crypto kingpin (BTC), the general bearish Crypto market sentiment is pretty evident. The immediate short-term resistance is @ $3400 but as long as the more significant level of $3800 stays intact, a meaningful correction looks far-fetched. The total market cap is perilously close to the Psychological of $100 billion with the BTC dominance @ 55.3% at the time of writing. 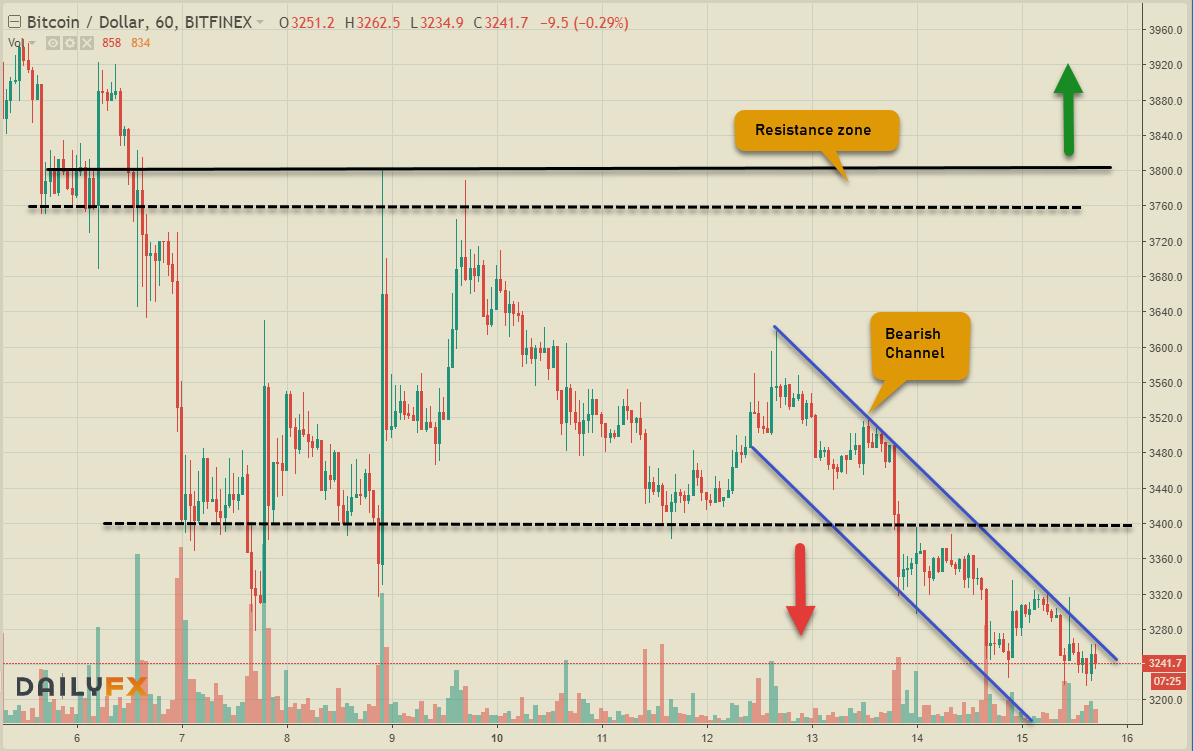 Finally, some good news if you can call it that, Crypto users have doubled in 2018 according to a study conducted by Cambridge Center for Alternative Finance. The institutional investment has also been on the rise the most part of the year in the digital assets as retail investors have been flushed out on the falling prices. The price for the digital coins is painting a completely different picture though. Let’s see what 2019 has in store for the Cryptos. 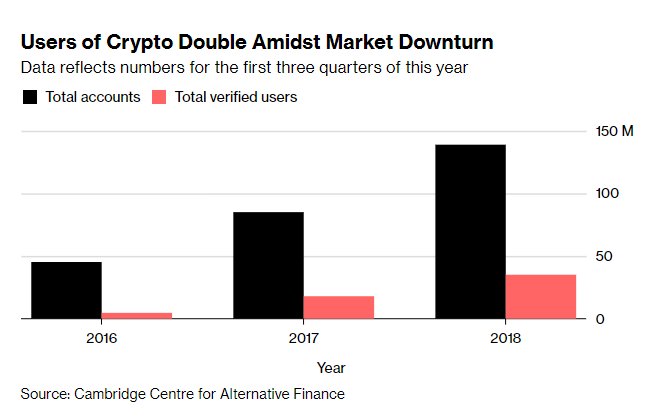 The Global equity markets have continued to be edgy, volatile & spooked by continuing trade war concerns & weak data from around the Globe. All the U.S indices closed in the correction territory for the first time since March 2016. The data readings all pointed towards the impending Global economic slowdown. Let’s review some of them. 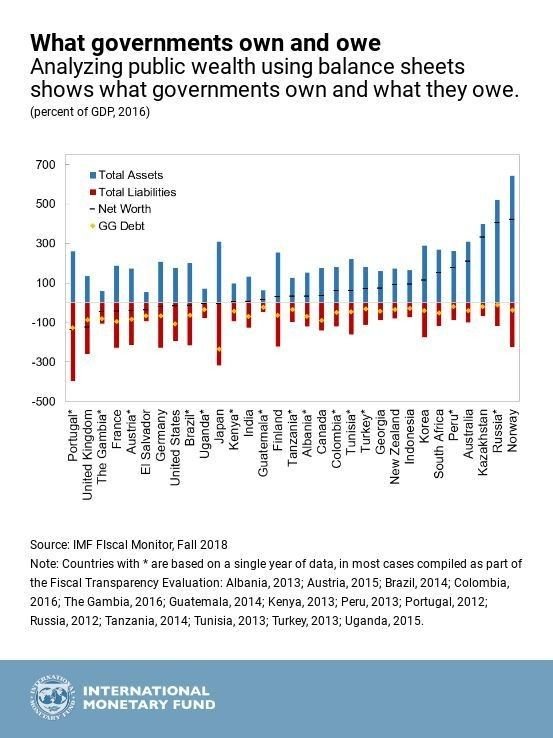 The chart for the U.S benchmark S&P 500 confirms the correction is gathering pace as the index begins to take out the immediate support & falling below the 2600 mark. The SPX reading stays pegged in the bearish channel with the MACD divergence towards the downside & the RSI making lower high too. Barring a turnaround or a major shift in the sentiment we are looking at further losses. 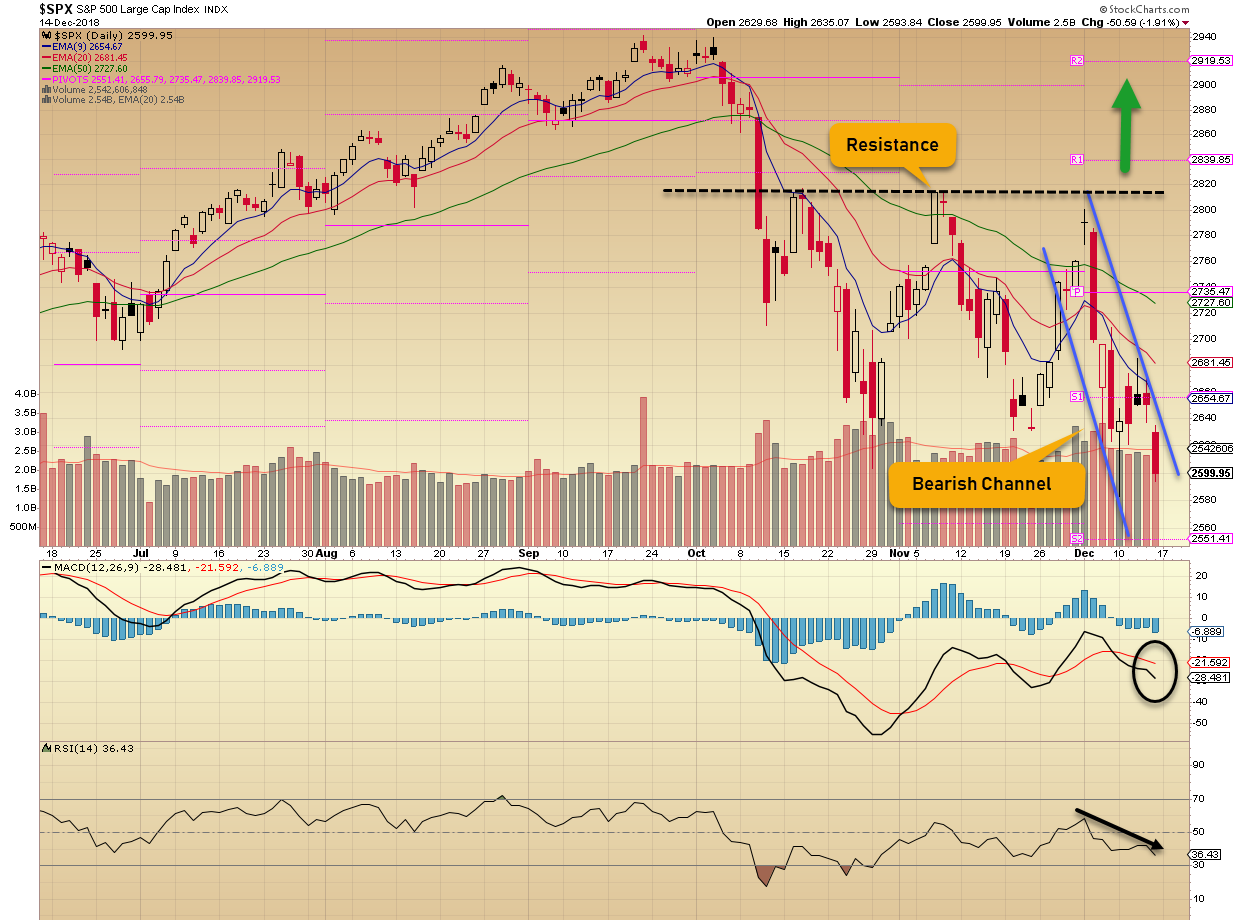 With the current situation in the financial markets, Greenback is in a rock and a hard place as evident from the congestion that it is seeing on the Dollar Index (DXY) chart. If the weakness in financial markets persists or accelerates the USD might gain further aiming for the previous high or taking it out completely. However, stability in Stocks, which looks fleeting right now, would point towards a bearish correction in the index. Considering the weakness in Equities & EURUSD (which accounts for 30% of the index), upside is favored at the moment. 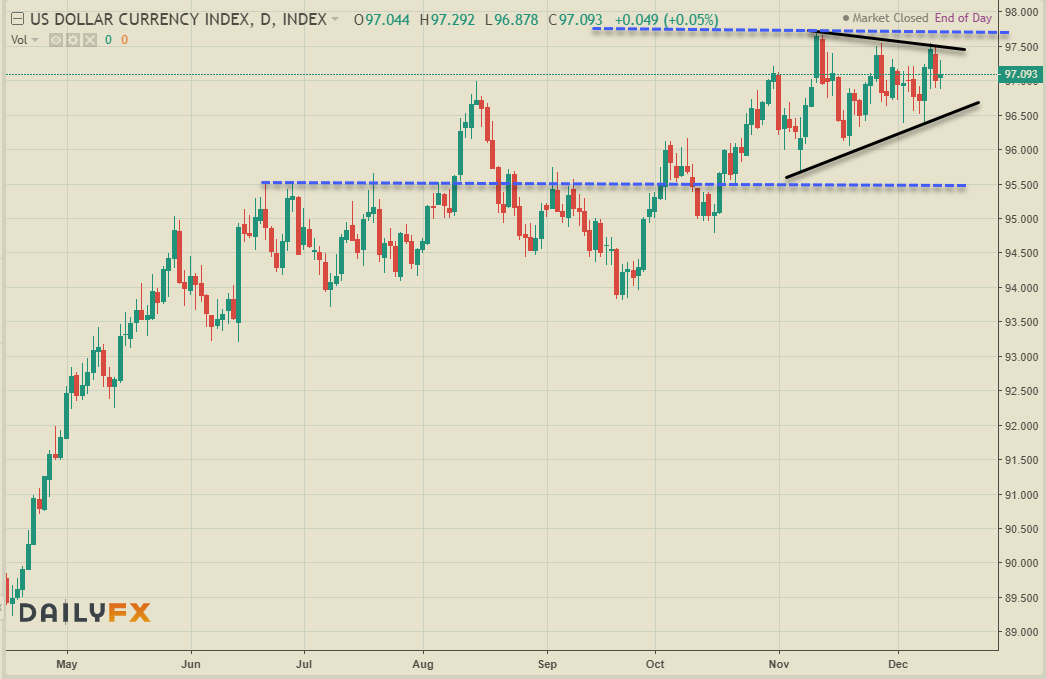 EURUSD made a significant move downwards with the weak data & economic uncertainties emanating from the Region forming a temporary top @ 1.1440. Any gains should be capped around 1.1315 beyond which an extended consolidation can be seen till 1.1355, but as long as this level holds the bearish sentiment in the pair would persist. Keep in mind though, with the holidays approaching there could be some wild moves in individual pairs as volumes thin out. Weakness persisted in GBPUSD with the ongoing Brexit tussle, while the commodity pairs of USDCAD, AUDUSD & NZDUSD remained anemic on growing growth concerns. 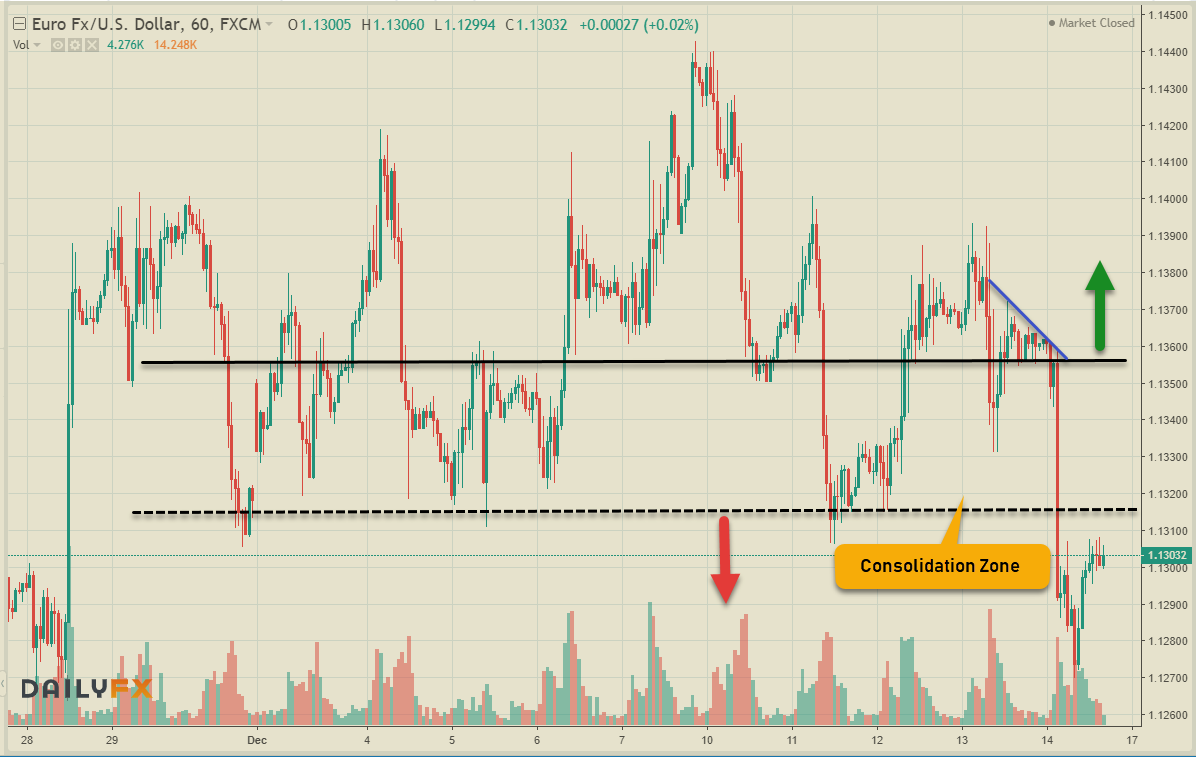 Next week has lots of important data releases on the docket before the holidays lull. 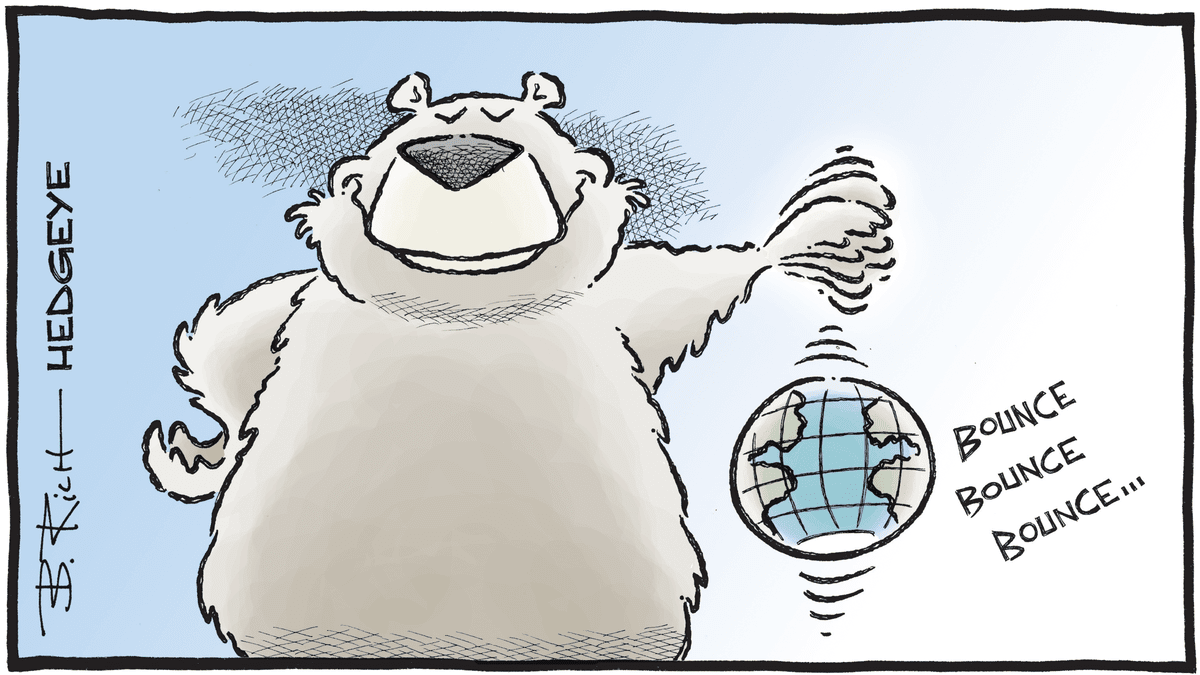 Faisal Khan Faisal is based in Canada with a background in Finance/Economics & Computers. He has been actively trading FOREX for the past 11 years. Faisal is also an active Stocks trader with a passion for everything Crypto. His enthusiasm & interest in learning new technologies has turned him into an avid Crypto/Blockchain & Fintech enthusiast. Currently working for a Mobile platform called Tradelike as the Senior Technical Analyst. His interest for writing has stayed with him all his life ever since started the first Internet magazine of Pakistan in 1998. He blogs regularly on Financial markets, trading strategies & Cryptocurrencies. Loves to travel.
« How Will Roundup Lawsuits Affect The Herbicide Industry?
Flippening & Flappening in Cryptoverse… What are they about? »

One Reply to “Cryptos hope of a recovery waning & Stocks volatility…”