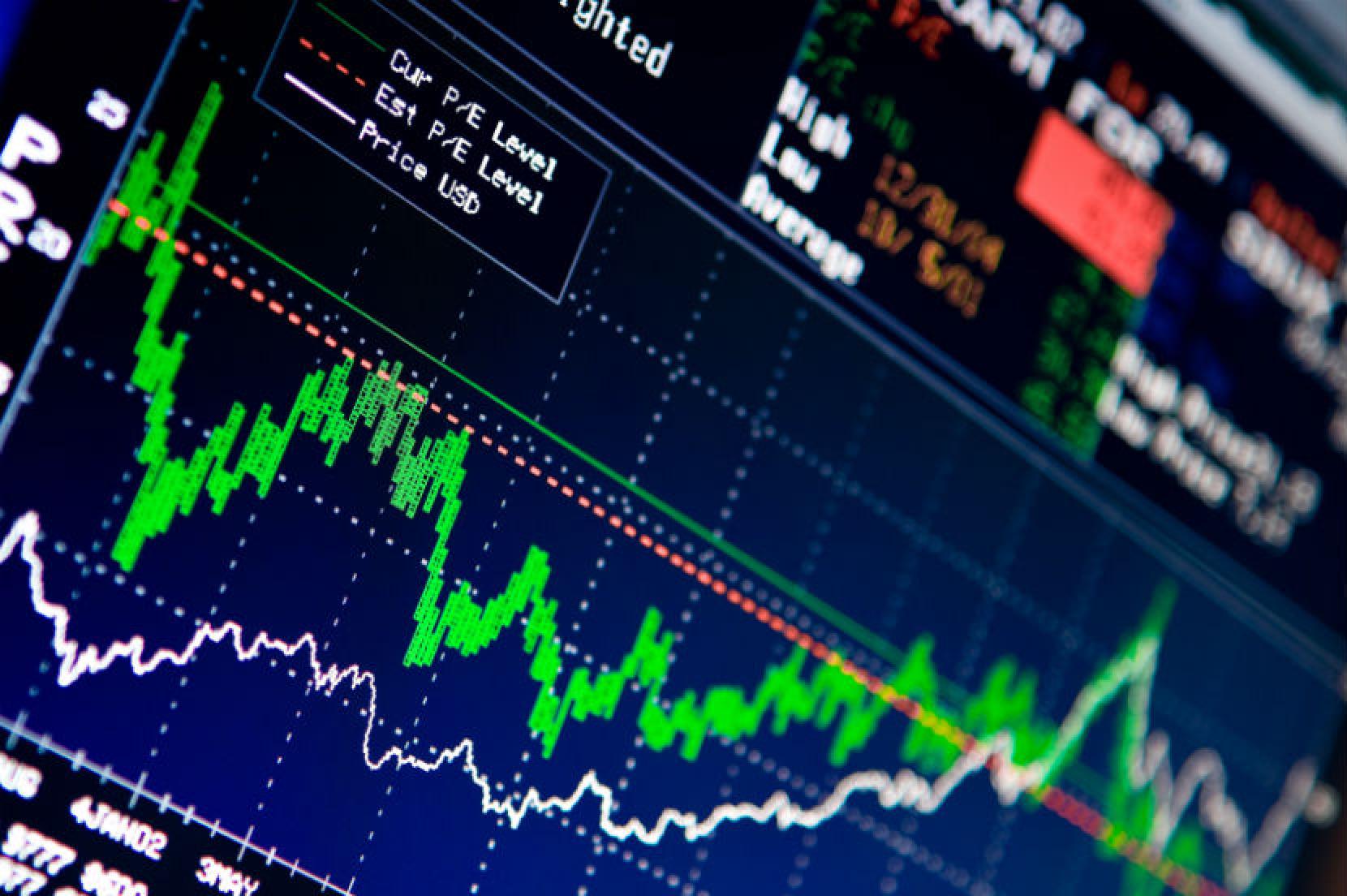 It has been an impressive run for the U.S stocks for the past nine weeks ever since the recent market bottom on the Christmas eve last year. Although Dow snapped the nine week winning spree, the fundamentals still look good in the backdrop of U.S-China trade talks heading towards a positive conclusion. Cryptos witnessed the system wide upgrades in two of its dApp platforms – Ethereum & Tron but the hard forks have failed to translate in to a meaningful price action. On the Forex side, Greenback maintained a firm posture this week with the equities taking a pause. Here’s a wrap up of some weekly number for you. 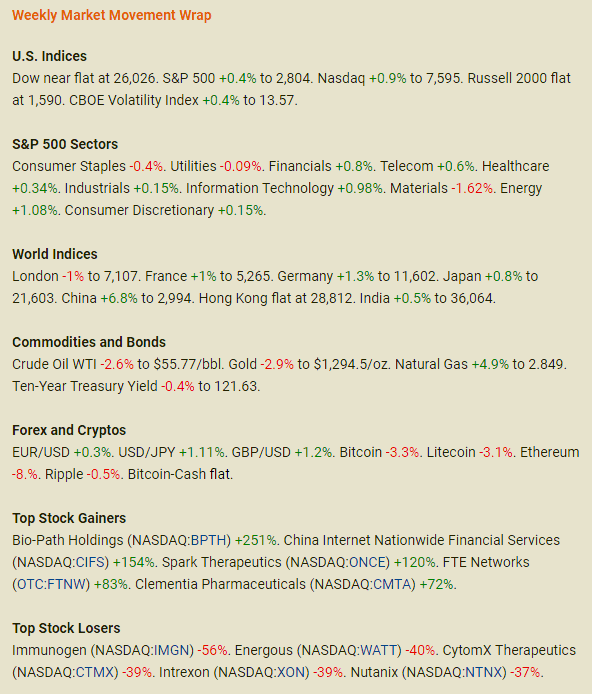 The Cryptos have survived an earlier impulsive fall during the week to consolidate sideways which continues at the time of writing. Like previous bounces, the recent recovery was met with selling pressure bringing them down to the usual trading range. The upgrades in Ethereum & Tron which went live on Feb. 28 didn’t stoke any volatility or translate into any meaningful price moves either in these two digital assets or the general crypto market. 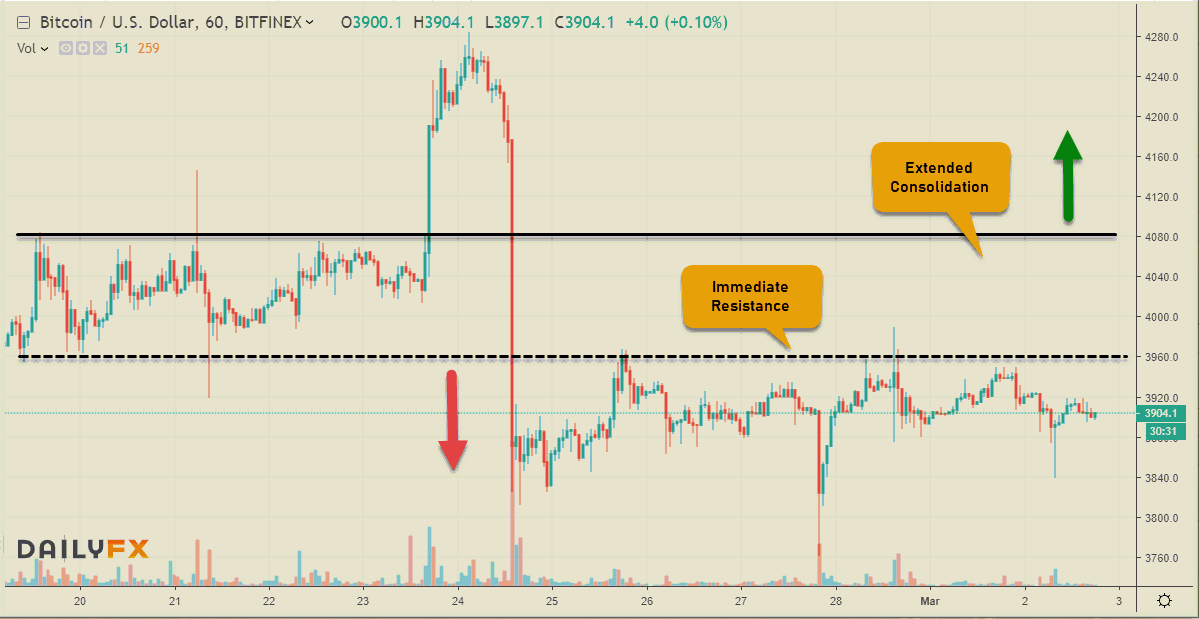 Looking at the BTC chart, the immediate bias remains bearish below the immediate resistance of $3960. As usual any meaningful recovery in the Crypto kingpin has been met with fierce selling as evident from the fall on Feb. 24 (chart above). The crypto needs to penetrate the resistance to relieve the bearishness, but extended consolidation could be seen to $4080 which needs to be penetrated to attain a bullish posture in the short-term. BTC dominance stands at 52.1% with the total market cap of $130 billion currently. 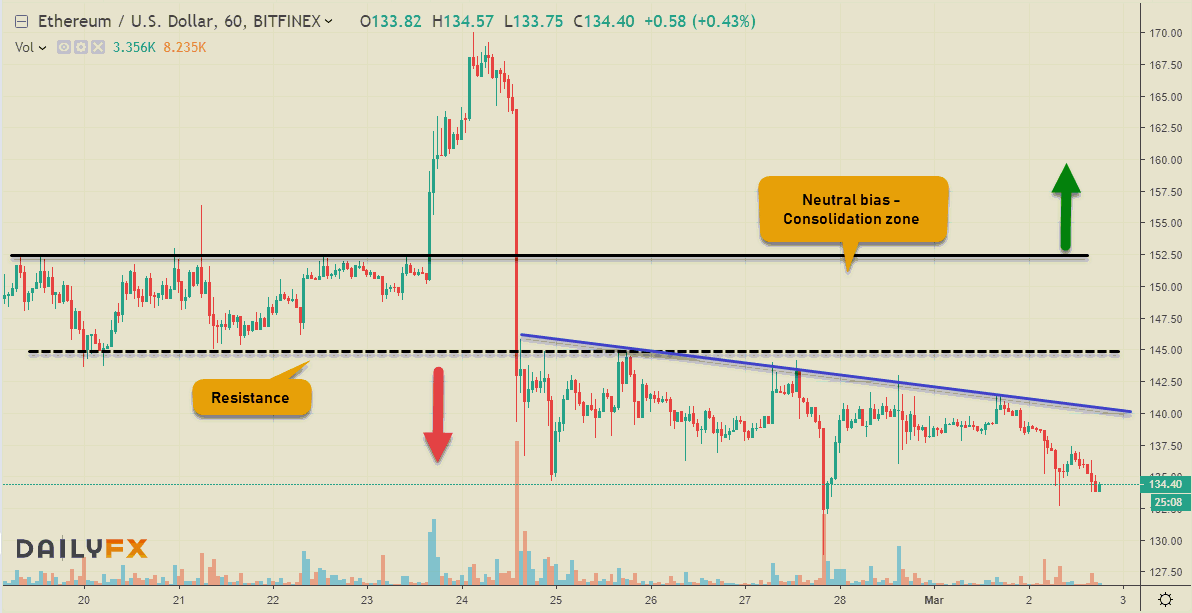 Looking at Ethereum, bearish pressure is even more prominent with the hard fork not lending any support. The resistance @ $145 is keeping the gains capped for now with the bearish trend line showing the lower highs taking shape. A move into the neutral zone between $145-152 would relieve the downward pressure but only a break of the $152 would signal a constructive move up. 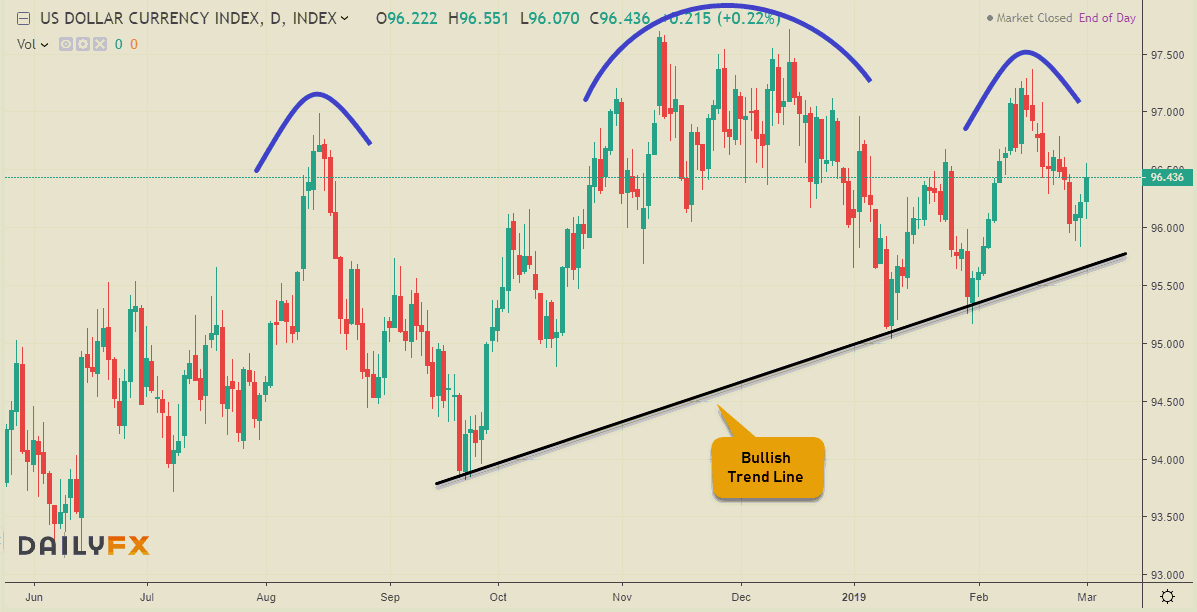 Greenback held its own this week with the rebound in the Dollar Index (above) honoring the trend line. Looking at the bigger picture, we could be looking at a broader head & shoulders pattern taking shape. However, the current trend still looks constructively bullish as look as the conjunction of the bullish trend line & immediate support in the 96.00 region holds. Only a move below 95.00 would signal the medium term trend reversal in the offing. 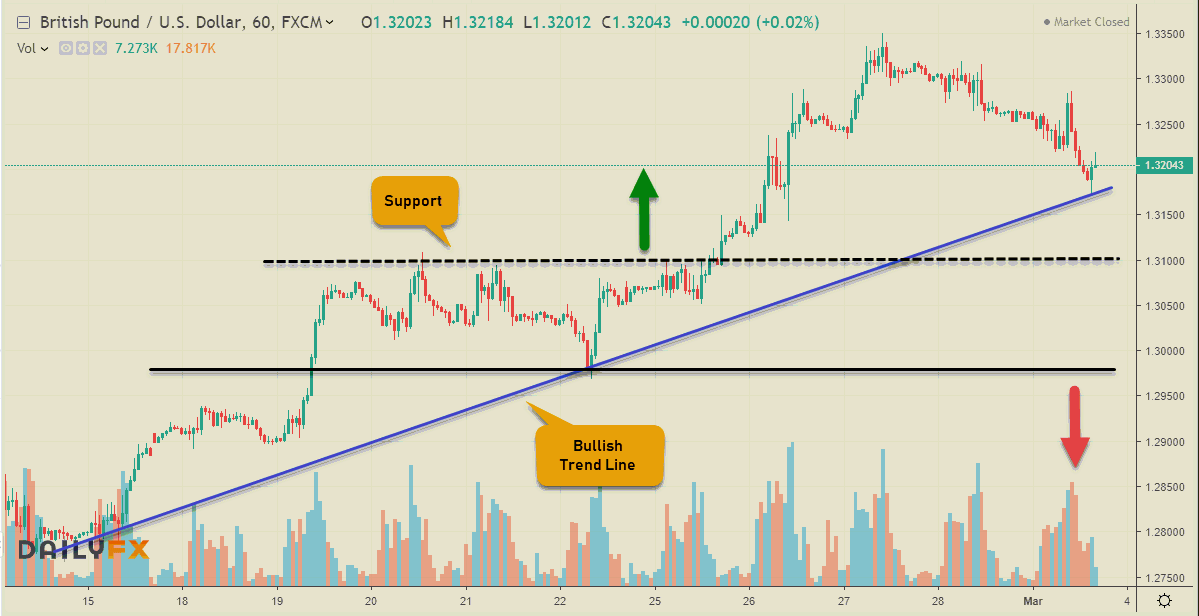 The biggest move this week came from GBPUSD as the best performing major of the week. The extension of the Brexit deadline has helped the pair gain bullish traction. There was some profit taking towards the end of the week but the immediate trend remains bullish as long as the support @ 1.3100 holds – a move below this level would change the bias to neutral at first. Only a penetration of 1.2980 would signal a bearish undertone taking hold. Next week sees the central bank rate decision from Australia (RBA), Canada (BoC) & Europe (ECB) with employment numbers from U.S, Canada & Australia as well. 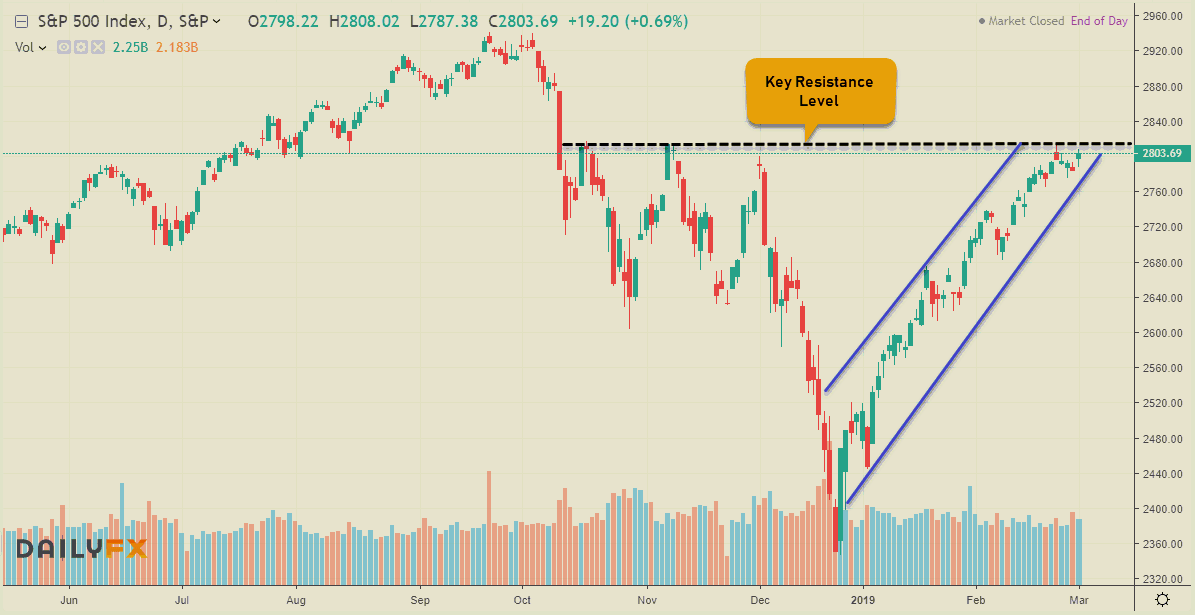 While S&P 500 & Nasdaq continued their weekly gains, Dow finally snapped the 9 week rally. With the extension granted by the U.S & talks on track to conclude with a comprehensive trade deal between the two biggest economies of the World, the global equities in general & the U.S stocks in particular have continued to track upwards as evident from the SPX benchmark index. The index managed to close above the all important 2800 level. Once this level is penetrated, it would confirm the bullish reversal of the index from the low created in December. For now, stocks look in good shape. Happy trading!

Signing off with a comic depiction of how Chinese economic data numbers are perceived globally. 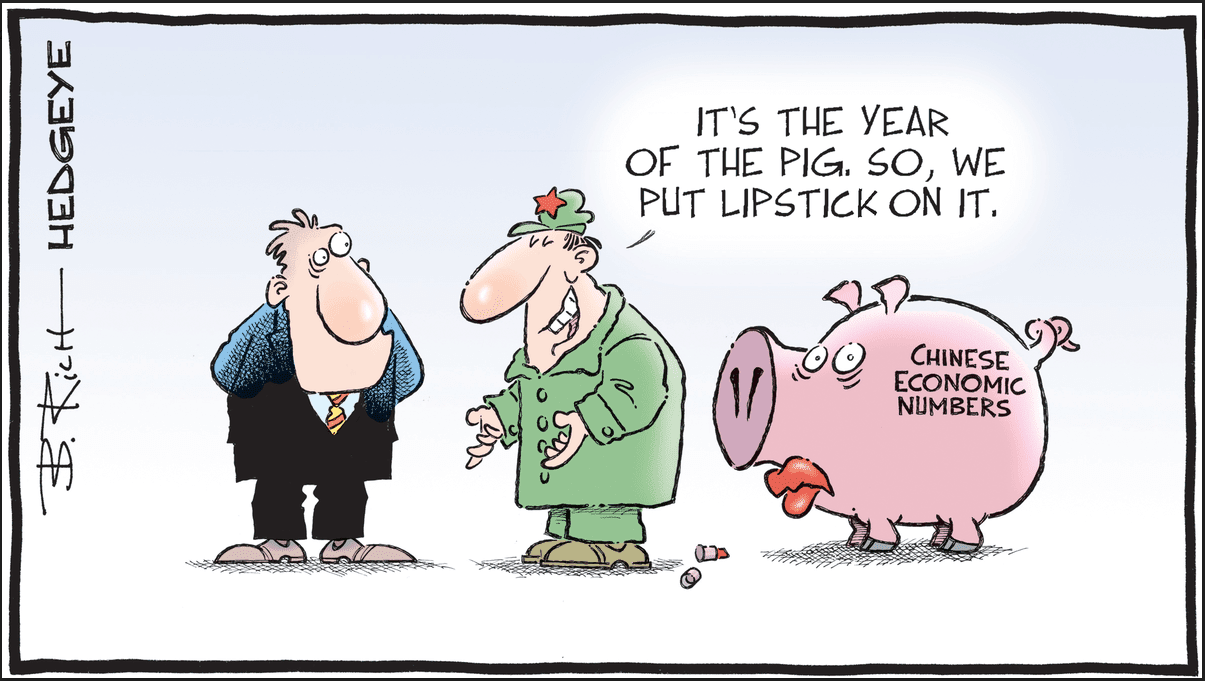 Faisal Khan Faisal is based in Canada with a background in Finance/Economics & Computers. He has been actively trading FOREX for the past 11 years. Faisal is also an active Stocks trader with a passion for everything Crypto. His enthusiasm & interest in learning new technologies has turned him into an avid Crypto/Blockchain & Fintech enthusiast. Currently working for a Mobile platform called Tradelike as the Senior Technical Analyst. His interest for writing has stayed with him all his life ever since started the first Internet magazine of Pakistan in 1998. He blogs regularly on Financial markets, trading strategies & Cryptocurrencies. Loves to travel.
« Who heals the healer when depression strikes?
DDI Editor’s Pick: 5 Machine Learning Books That Turn You from Novice to Expert »