If anyone was underestimating China’s ability to hit back & take this Trade War to the next level, the announcement overnight must have come as a rude surprise. When I wrote an earlier piece about the Re-escalation of the Trade War, I had discussed the limited options China had to retaliate. The focus has always been on China dumping U.S treasuries if they are pushed too much against the Wall. But as mentioned before countless times that it would not be a wise option as it would drag down the whole financial system with it. I don’t know if China is going to take that route, but it has been certainly pushed to the wall with the U.S banning of their tech giant Huawei & threatening to increase tariffs on all the imports from China along with banning American equipment for other Chinese tech companies. The arm twisting techniques were only gonna go so far… and they have.

Turns out Chinese were not sitting quietly. They were trying to figure out the most effective way to get back at the biggest trading partner. Until now, it seemed the U.S was dictating the terms & direction of the trade talks but with the latest maneuver, China has decided to go on the offensive. Among other media reports, an editorial in the Communist party newspaper People’s Daily suggested China cutting exports of rare-earth materials to U.S which are critical to defense, energy, electronics and automobile sectors. This threat to weaponize rare earth elements not only heightens the already existing tensions between the two biggest economies but adds a dangerous dimension to this impasse. And there are two reasons why this threat is credible & should be taken seriously.

First, China is the dominant producer of rare-earth elements in the World & more importantly 80% of U.S rare earths come from China (figure above). With United States cut off from rare element supplies from China, it would become really difficult to meet the demand of its critical industries where they are used.  Second thing that was worrisome was the language used in the editorial of the Communist party newspaper – “don’t say I didn’t warn you” –  this specific quote was also used by the same Paper before China went to war with India in 1962 & before China and Vietnam conflict broke out in 1979. Sufficed to say using means Chinese mean business this time. 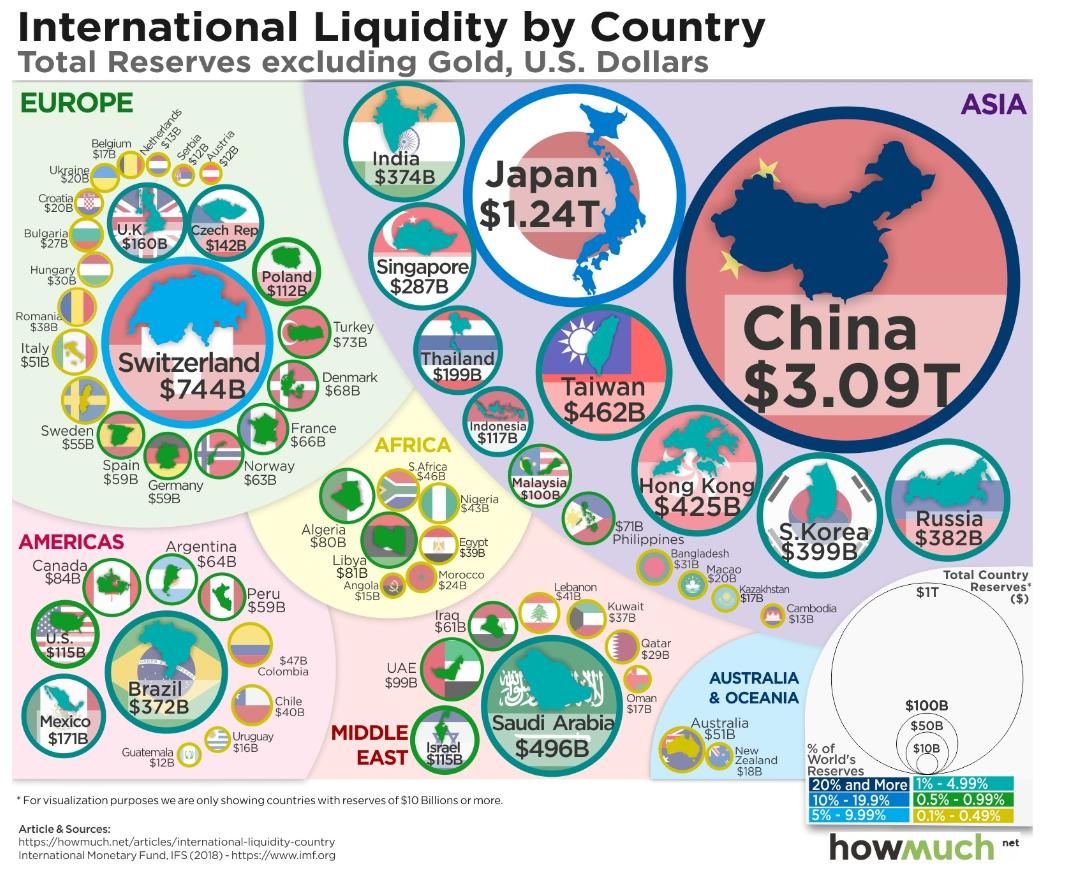 Reportedly China is pondering over other countermeasures apart from cutting exports of rare-earths to U.S. One thing that they might be considering is utilizing the huge liquidity reserves of well in excess of $3.0 trillion (chart above) to gain leverage in this trade war. A country’s reserve stockpile can dictate how much economic weight a country can throw around and as evident China is in a very strong position. China’s foreign reserves are well in excess of any other country in the World & selling those reserves can have grave consequences not just for the U.S but for the global economy. This is actually how China has been manipulating the value of its currency Yuan (pegged against the U.S dollar) to gain a competitive advantage in trade. This also gives China the ability to buy or offload the U.S government’s debt (Treasuries) on a moment’s notice. If China was to flood the market with U.S dollars, it is almost certainly going to cause an increase in the interest rates which would amount to curtailing the economic growth in the U.S. However, a significant decrease in the value of the Greenback due to this action would mean an increase in U.S exports due to a cheaper dollar – something which is not desirable by China. So China will have to walk a tight rope if it wants to pursue this line of action.

Related Article:   Fintech Felt Like Funtech but Now Libra is On Its Way

Things have moved beyond threats & tariffs to pulling out of some serious ammunition on both sides. One thing is for sure – the collateral damage would be massive on both sides. I hope both sides realize soon that there is no winner in this war and the global economy is suffering. Let sanity prevail…

Artificial Intelligence as a Tool for Investing

What Mobile Banking Means for the Digital Economy?

Are You Experiencing FOBO?

How is Artificial Intelligence (AI) used in Healthcare for better outcomes?

How Much Money Will Make You Happy?

What’s the Difference Between AI and Machine Learning?

How to Overcome the Model Bias in AI?

Elbow Method – Metric Which helps in deciding the value of...

Leader or Follower? Both!

The Virtue of Aristocracy Abides No Borders, even within the German...

Wearables. How about An Electronic Coat?

Startups And The Series A1 Trap

ABOUT US
We are on the cusp of a data revolution. In virtually all walks of life, the mass proliferation of data is transforming the way we perceive the world. And only now are we waking up to its enormous potential for helping us make better, more accurate and more informed decisions. Data Driven Investor (DDI) is dedicated to uncovering how ordinary people can best utilize data to make those decisions.
FOLLOW US
© Copyright 2019 by Data Driven Investor.