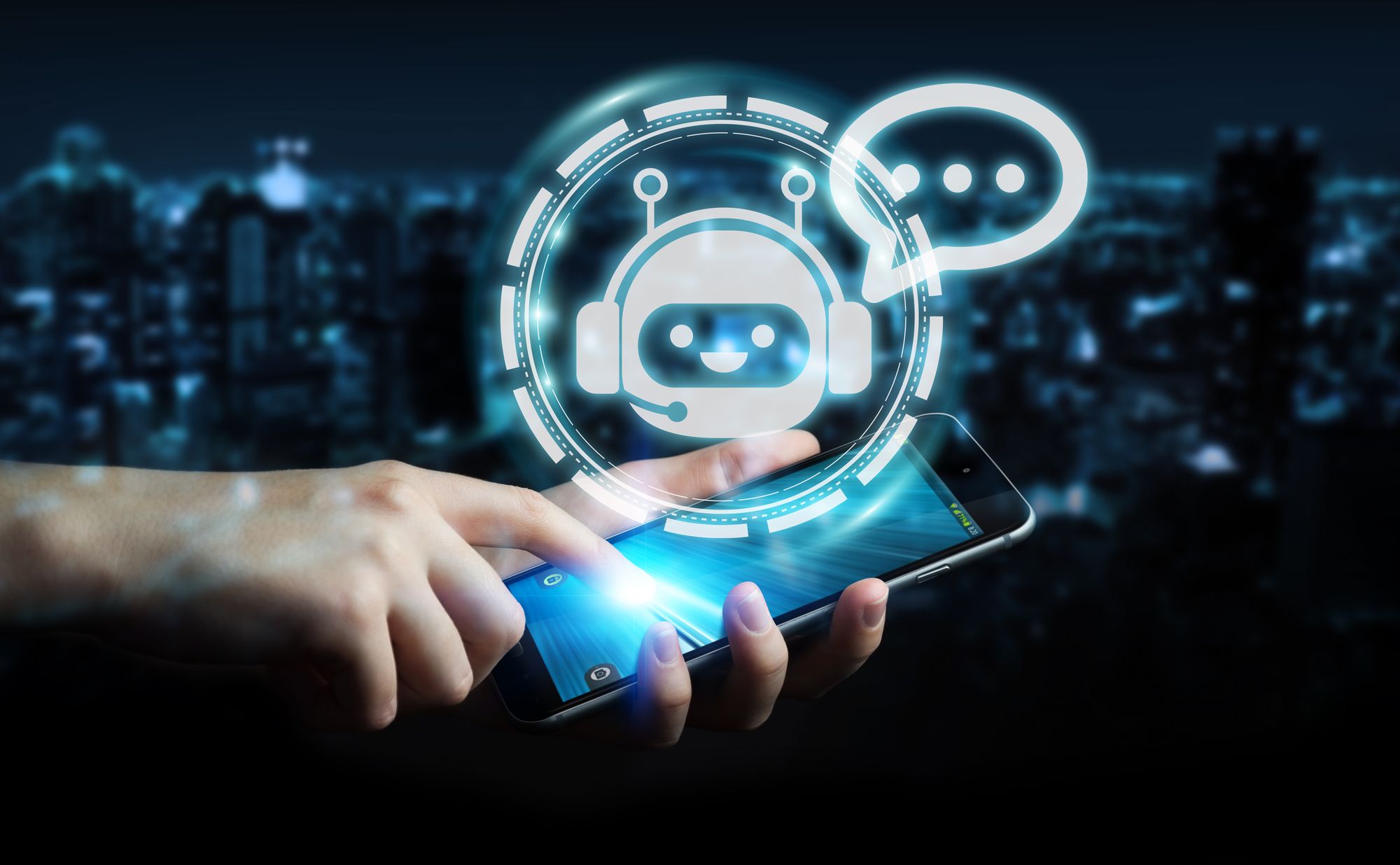 When we think about our everyday behaviors, we often do not realize, how big is the percentage of the actions we do each day automatically.

The reason: we’re “hooked” by unconscious actions that deeply connect to our needs.

According to Charles Duhigg, the author of “The Power of Habit” book, about 40% to 45% of our everyday actions are unconscious, thus, we call them habits. Though it may feel like we’re making decisions, we aren’t consciously thinking them over.

This is perfectly described by Nir Eyal in the “Hook Model”: 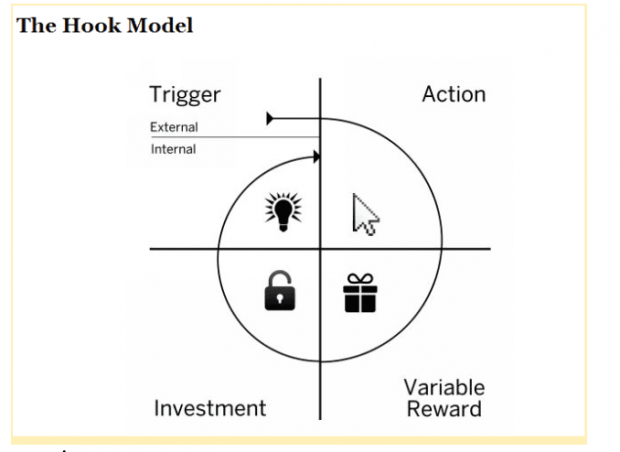 First, we see a trigger, which excites us with a relevant piece of information, or sparks in us a certain emotion. It can be a message notification or sudden need to connect, to feel more engaged, social and aware. We’re feeling a desire to scroll our news feed or chat. And, voilà, we are now in an action stage. The simpler the action is, the easier it is for us to repeat it.

Every action forms a behavior. Each time we receive a message notification or scroll through the feed, there’s a little dopamine splash in our brain. As we’re anticipating pleasure and reward, the dopamine level in our brain rises, and we start to feel so good.

We think: “Someone just messaged me! Something cool is happening! Let’s check it out”.

Once we’ve checked the message and that’s nothing special, nothing worthy of our immediate attention or reaction, our brain tells us: “Okay, not this time. However, next time…”.  Even though there was no reward this time, our brain starts to rewire itself and crave for more dopamine.

This is how slot machines work. And this is how our news feed works – it gives us the reward of the hunt. The first 3 posts weren’t that engaging, but what about 4th and 5th one? And that’s the “hook” we get onto.

We love the anticipation, and it’s incredibly hard to withhold from it. Especially when the reward is so easy and simple to get and gives us a feeling of belonging to a tribe.

Along with the anticipation of the pleasure and reward, our brain gets full of dopamine. Dopamine pushes us to hunt, communicate and have sex with each other. In the past we had to do something: make an effort, move, start talking, or do any kind of action, so we can get our dopamine. However, nowadays social media offers us immediate dopamine reward, with little or no effort from our side.

That’s why it’s getting increasingly hard for people of all ages to control how much time they spend online, with a little dopamine stimulator always in our pocket. Such time spending is especially dangerous for kids and teens, as they enjoy continuous dopamine splashes from watching cartoons, TV series and games. Due to unrestricted dopamine stimulation kids and teenagers are getting less sensitive to dopamine and require more and more of it, which, in turn, leads them to addiction.

As we can clearly see from the graph below, the average daily time spent on social networking is increasing every year.

According to CBS, 29% of 18 to 24-year-olds consider themselves addicted to social networking, while in 2015 this figure was only 19%. Despite it is a psychological factor, the brain scans of people spending large amounts of time on social media show alike impairment of the brain regions the drug-dependent people have.  The MRI images showed an obvious degradation of brain regions that control decision-making, attention, and processing of emotions.

Thanks to neuroscience we understand much better how the brain works. Unfortunately, the dopamine system of our brain isn’t capable to recognize the difference between good and bad triggers, such as doing the workout regularly or staying in bed instead. If dopamine is released in a response to a maleficent trigger, it can reinforce bad habits, so they become long-term addictions.

While it may seem the dopamine addiction is something that concerns “others”, all of us is to some extent influenced by it. The number of messages we receive every day is increasing every year. According to Statista, 65 billion messages are sent per day using WhatsApp.  Some of these messages are highly relevant and important, while others are just annoying social networking distractions that whisk our time away. It has been proved by numerous studies that distractions make us less productive.

How an AI Chatbot can save you from the “hook”

Artificial intelligence (AI) and machine learning (ML) can significantly help in resolving the “hook” problem on social media. With the help of AI and ML a chatbot is trained on diverse datasets and conversations and has enough intelligence to handle standard questions and inquiries. Imagine, won’t that be great if there is a smart personal AI chatbot that can handle those never-ending all alike messages for you?

We have decided to create a smart personal chatbot that acts as a second you on messenger platforms and responds for you to an annoying distant friend or relative, who always sends irrelevant texts and videos, while you can focus on your priorities and goals.

We’ve called our chatbot AIBRO – your BRO that uses AI technology to respond on your behalf.  AIBRO belongs to the generative chatbots: with the help of machine learning algorithms, it trains on your previous chat responses so it can deliver the best reply possible. AIBRO easily adapts to your style and learns what words and emojis you use most often and chats completely as you do.

You might think about going on a digital detox. AIBRO makes it real. This intelligent chatbot can take over our social media distractions, so you can concentrate on work, and be more productive at what matters for you the most.

With AIBRO chatbot you can considerably cut the time you spend chatting.  You can sign up with your email on AIBRO’s website and receive an email when the chatbot will be publicly available. In its first release, AIBRO will work for Facebook Messenger; you can install it as an app for your smartphone and activate it for specific conversations. In Q2 2020 AIBRO will be released for other messengers, such as Instagram, WhatsApp, Viber, WeChat, Telegram.

The right habits define our success. What about your social networking habits? Is it something you’d like to spend less time on? Then it’s time for you to try AIBRO.

Kyrylo Lyzanets CEO & Founder of AIBRO. M. Sc. in Management. Wants to create a life-changing product — and is moving towards that dream fast. Believes that artificial intelligence may solve many global problems if used properly. Enjoys playing Dungeons & Dragons (his favorite character is a drow rogue), cue sports, and playing the piano."Technologies now seem to have weakened our connections with our families and loved ones. I believe that they are also able to reverse the process and make us happier. By freeing up time and using technology wisely, we are free to pay our attention to the things that really matter"
« Healthcare needs Physician Independence
Updated Patent system in China: the PAO »