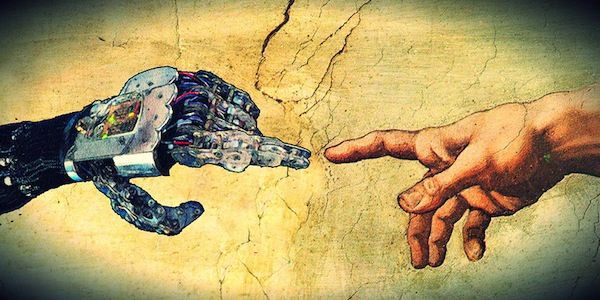 Intro to GNR(Genetics, Nanotechnology, and Robotics)

As a fellow believer of the acceleration of technology and fanboy of esteemed futurist Ray Kurzweil, I will be writing a 4-part series on his predictions on GNR and how they stand today. This is part 1 of 4, enjoy!

The singularity is near! We are getting closer to the time when our biology will become outdated and we will transcend into the next stage of evolution. This transcendence into the future will be powered by 3 technological revolutions grouped by 1 acronym, GNR. Ray Kurzweil believes GNR will be a set of overlapping revolutions that will define the future of the human race.

The G stands for genetics, the information systems of our biology. Genetics has been on the agenda for some time, but in this decade we will see explosive growth in the biotech industry. Where we will be able to determine if we can reprogram our biology. With recent developments in this field, we have shown great promise towards a future in which we can slow down or even halt biological aging.

N stands for nanotechnology, engineering conducted at the nanoscale (10^–9 meters and smaller). In the next few decades, we will have nanobots, blood cell-sized devices, that can interact with your body at the molecular level. These bots will be able to go inside your body and keep you healthy by fighting diseases at a level modern medicine cannot. With the capability to manipulate matter at even the atomic level, these bots could go into your brain, interact with your biological neurons, and allow us to merge with non-biological intelligence.

Finally, R is for Robotics (w/ smart AI) the time when machines will be able to match human intelligence. The most significant revolution of all. A key difference in this revolution is that robots will not just be automated to take over repetitive, manual tasks but even ones that require cognitive decision making.

At our current rate of innovation, due to the law of accelerating returns, we are bound to see these wonders define our future faster than we think.

A Change of Pace in Innovation

The law of accelerating returns is a tendency that the speed of evolution increases exponentially. This belief in acceleration was not too popular till recently.

For the second half of the 20th century, we believed that technology was growing at a constant rate, as defined by Moore’s Law (authored by Co-Founder of Intel Corporation, Gordon Moore). Moore’s Law describes that the number of transistors on a microprocessor ( or microchip) doubles every 2 years with the cost of computers halving. Microprocessors are the central unit of the computer that performs arithmetic & logic operations to give a computer its’ instructions.

If you just look at the graph down below it shows how technological progress was viewed from the 1970s till 2011.

However, if you step back to see the full scope of technological growth from the past 6 centuries, you see that innovation in human history has actually been exponential.

Technological growth isn’t slowed down by the actual rate of innovation, but rather by policy & speed of accepting change as shown by Martec’s Law.

As innovation will not cease in speed, GNR will continue to grow exponentially.

These 3 revolutions in technology will have a tremendous impact on our lives but we have yet to know how things will play out. As they continue to converge, their acceleration will increase. Between the exponential growth of technological and logarithmic adaption to these changes, we will begin to see the dawn of singularity, a point of uncertainty.

The Singularity, a Point of Uncertainty

“GNR will provide the means to overcome age-old problems such as illness and poverty, but it will also empower destructive ideologies. We have no choice but to strengthen our defenses while we apply these quickening technologies to advance our human values, despite a lack of consensu on what those values should be”
— Ray Kurzweil

The Singularity is a hypothetical point in time at which technological growth becomes uncontrollable and irreversible. We name this unforeseeable point the Singularity because in a black hole there is a one-dimensional point where the laws of physics cease to operate and we cannot see past it.

At this point, even the smartest people in the world can only make assumptions as to what will happen to the human race. However, predictions tend to be on the side of optimism if we begin to accept this unforeseeable change.

Eventually, GNR will give us the capabilities to:

Critics accuse Ray of being too optimistic and argue that the dangers of Singularity far outweigh the benefits, pointing out the apocalyptic implications that once machines achieve consciousness we may not be able to control them. Whether Ray’s controversial ideas incite excitement or fear, this event will forever change our fate as a species.

As the clock keeps ticking, we get closer and closer to that time of uncertainty, a future that seems to be most advantageous if we converge with technology physically.

I believe the perfect society is as futurist Peter H. Diamandis puts it,

“the best choice for humans is to become symbiotic with machines. Not humans versus AI, but humans working with AI.”

the day when we can just insert a chip into our brain that will upload us to the cloud. We will have a vast pool of knowledge that we can gather instantaneously, at the speed of data, but at the same time process it a lot quicker. Companies such as Neuralink (Founded by Elon Musk), Neurable, and Kernal are already beginning to build symbiotic solutions with BCIs (Brain-Computer Interfaces). If we should converge with GNR, we will begin to answer some questions humanity has always wanted to uncover.

Can we live forever?

As a man of science, I would like to say anything is possible just within the assortment of rules governed by science.

Will we actually want to live forever?

I guess that depends on what you believe brings value to life and what point you think it should be turned on or off. This is a personal and philosophical question that when the time comes is for you, and you only, to decide.

Stay tuned for the next part in this series, as we will uncover the G in GNR, Genetics. The process that information is stored within our biology.

Andrew Kirima Andrew was born in Kenya and moved to the US when he was 3. He graduated in the class of 2020 from the University of Arizona with a B.S. in Systems Engineering and a minor in ECE (Electrical & Computer Engineering). His entrepreneurial endeavors began senior year of college when he and some classmates founded Facade Technologies to sponsor their own Senior Design Project. They built a desktop application named Facile that can compile APIs to automate other applications. Right now, he is the CTO of Sencha Credit, an early stage fintech company, where they are working hard to develop the debit card that builds credit. Their mission is to empower everyone to build credit effortlessly and reach new financial heights! He loves to share his enthusiasm for the acceleration of technology on his blog, as he encourages entrepreneurship while exhibiting his passion for deeptech. Andrew understands that the speed of innovation is exponential, but he’s worried it takes too long for organizations to utilize new innovation, so his mission is to teach & demystify the complexity of deeptech to everyone. “Humans beings are evolving. Some believe we’re transcending into a new paradigm of evolution, and I want people to embrace that future.”
« Reporting the News
Amazon’s fundamental weakness that Bezos can turn into a strength »