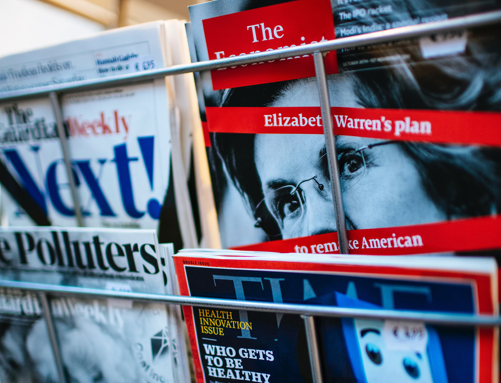 Access to factual information is critical for democracy. Control of information by a few is detrimental. Removing news from a profit-driven system is essential. Creating independent outlets free of profit-driven corporate control is vital to the future of democracy.

The decline of American democracy has a long history with many actors. There are multiple domains, one of which is getting news and information to the public by sources independent of government control. It is the vital link in the health and welfare of any democracy. It is one reason why our founders enshrined freedom of the press in the constitution.

No discussion about reporting the news can ignore how news outlets have been gobbled up by a few large conglomerates. Comcast, Disney, ViacomCBS, Fox, AT&T, and Charter Communications are among the largest in the U.S. There used to be a local spin or angle to the news that came off the wires. Today there is sameness and uniformity in coverage and presentation that reminds me of how we once viewed Pravda in the former Soviet Union. All corporate news comes essentially from the same sources. Our alternative is to look at and read the many alternative news sites that have appeared and are continuing to grow. Some are practicing real journalism.

One who has written extensively about the problems of American media is Robert McChesney. He states, “Democratic theory posits that society needs journalism to perform three main duties: to act as a rigorous watchdog of the powerful and those who wish to be powerful; to ferret out truth from lies, and to present a wide range of informed positions on key issues.”[1] Our media fails at all these tasks.

The decline in our getting the news and information we need and the rise of fake news, alternative facts, and post-truth can be traced back to the early 1970s. That is when the news became the news show. Up to that point, the evening news focused on providing the major news events and information to the public. There, were commercials, but they took a backseat. It was not the primary focus. True there were omissions, but news organizations did try to inform. That changed in the early 1970s when ratings became dominant and news became just another network profit center. The evening news ceased to about what was happening in the world, or often what was paramount, and transformed into an overpaid personality parade whose prime purpose was to hold the audience’s attention between commercials.

Blanket, non-stop news coverage of celebrity woes and high profile crime while ignoring or downplaying issues such as racism, inequality of wealth and opportunity, Medicare reform, healthcare costs and coverage, climate change and global warming, corporate crime, and a long list of other issues amounts to providing the public a lollipop in place of a meal of substance. It may satisfy your immediate desire to eat something sweet but does nothing to relieve your hunger. The media act in concert with government acts and corporate dictates by providing mental masturbation to distract us from our problems. Alas, it is no surprise their credibility has fallen faster than the stock market in the great crash.

Donald Trump’s rise to the presidency would never have happened without his celebrity TV program, The Apprentice, fueled by $1 billion in free advertising and television exposure supplied generously by all the major television and other news outlets.

The vulgar over coverage of celebrity shenanigans and bizarre crimes trivializes our institutions and their processes. Nowhere is this more evident than in what happens in high-profile criminal cases. What the public needs and deserves to know should not overshadow the accused’s right to a fair and just trial, including the presumption of innocence until otherwise proven by a preponderance of the evidence or beyond reasonable doubt presented at trial. Frankly, the public has no automatic right to know “anything” before its presentation at trial. That is the proper forum for the release of most information. The fact it floods the press shows us how corrupted we have allowed the process to become in the interest of achieving public relations and media rating objectives. I seriously doubt any of these high profile trials are in any way fair. It’s all about money, exposure, timing, appearances, and the 24/7 news feed. How sad this is for all of us.

The second and more profound change that impacted receiving the news and being informed was the bi-partisan act of repealing the fairness doctrine during the Reagan presidency that had required TV and radio news outlets to allow equal time for opposing views. Its elimination led to opening the doors and windows to talk radio. Fox News, Sinclair Media, and others moved in to flood the airways accentuating one highly biased point-of-view with nothing to contest it. It opened the door to fake news, half-truths, innuendo, lies, and more.

It cleared the way for a number of online sites and broadcast media to promote hate and lies that ultimately led to the assault on the U.S. Capitol and the Congress by an enraged mob egged on by the Liar in chief on January 6, 2021.

There was an important reason freedom of the press was enshrined in the constitution by our founders. They understood the importance of the public having access to accurate information about the actions, behaviors, policies, and character of those who held the levers of power. What has occurred over the last several decades is the erosion and suppressing of that function. Six media conglomerates control more than 90% of media in America. The people who are employed by these six media giants are paid lots of money. Money is, it’s not rocket science, very intoxicating and enticing. You do not have to spend a lot of time watching the commercial network media news to discover their boundaries. They know their limits; it is self-censorship. They have a higher priority to adhere to. It is a personal priority. The network news organizations will never allow an expose’ of their conglomerate employer. ABC is not going to investigate Disney. CBS is not going to reveal dirty laundry from VIACOM. NBC is not going to disclose anything derogatory, Fox, well, it is Fox. As Sinclair Lewis noted long ago, “It is difficult to get a man to understand something when his salary depends on his not understanding.” The quote applies to far more than he originally intended.

I find watching the evening news more interesting for all they ignore to report rather than what is covered. When the U.S. invaded Afghanistan on October 7, 2001, I knew they were there 24 hours before the American media announced the invasion. How did I know? I was monitoring the Times of India at the time and saw their report. It pays to cast your net for news far and wide. Today that means looking at several online independent news outlets where the motivation is providing the public information unimpeded by concerns for a bloated salary.

It is no surprise American media are held in such low esteem. On some level, we know we are not being provided the information we need. We know crucial information is being either ignored or withheld. It is instinctive. The public does not trust the messenger, and for a democracy that cannot be. If we want our democracy to prosper, we must change how we are provided the news and information we need to be responsible and participating citizens. That means we must find a way to decouple the delivery of the news from profit-driven corporate conglomerates. We need some kind of independent funding of news providers.

Print media is in peril in America. I do not know if it is the same elsewhere. Our peculiar focus on profits skewers our approach. The newspapers I am familiar with first eliminated the composing room and gave the editorial staff the responsibility for pagination. That meant most of a reporter’s time was consumed with putting pages together, not digging for news. It meant calling contacts on the phone rather than seeing them and eyeballing their responses to questions. It meant developing relationships and seeing idiosyncrasies that reveal far more than words.

My local newspaper is slowly evaporating. The daily paper comes in four sections. The sections once were composed of many pages and multiple sheets. Today these sections are often no more than four pages. The Sunday paper is today the size of the daily paper of decades past. It also has changed from an eight-column to a seven-column format. Less is less.

As the size diminished did the coverage. Maybe if there was a focus on providing news readers were interested and cared about, they would find more readers. But, no, instead they cut more staff and deliver a shoddier product at a higher price. Such is the road to extinction.

The most dramatic change in media has been the emergence of the talking heads, or should I say thought shapers. Thought shapers are what they are. Fox News is the perfect example. Fox has a loyal cultish following. Its viewers believe without question the presentation they are getting is fair and balanced because Fox says so. This loyal cultish following can only repeat what they are told. They glued to or have Fox News on their TVs throughout the day. Fox is the only view they see, hear and believe. They become entranced. They repeat what they are told to think. It is as if they no longer have a mind of their own. I have many former friends to draw from. Adolf Hitler and Joseph Goebbels would be ecstatic

These thought shapers come in all political stripes. They are on the left as well as on the right. Our most dramatic failure as a society and nation is our failure to adequately prepare our public to develop the critical thinking skills needed to identify bias, fake news, lies, and half-truths. Doing so, we arm them and immunize us all to the inevitable effects of the relentless repeating of the big lie. We must learn to seek out diverse views from a diverse number of sources, domestic and foreign. Of course, corporate America might then find using some popular forms of advertising ineffective. The government might have a more difficult time misleading all of us about its activities and intentions. Some preachers might find their ability to fleece followers more difficult. Things might actually have to work, and wealth might be more equitably shared. Imagine that.

Jerry Lawson Writer/ghostwriter/essayist (www.jerrymlawson.com), freelance journalist and artist. As a historian and biographer, Jerry operates a business focused on writing memoirs, biographies, and personal histories for private clients. Jerry was adjunct professor teaching history and government at several universities and worked as a reporter, editor, and managing editor of a newspaper. He acquired other experience working in industry, business, and banking. A recognized artist creating mosaics using hardwood scraps and pieces that are other’s trash. I live to write, create and make things using whatever medium is available. I am an explorer. I investigate, follow, and ponder whatever opportunities and issues life presents. I am curious about all things by nature and my interests and my writings and art are as varied as my experiences.
« What would it take for a robot to lie when asked by a human?
3 Technological Revolutions that will Accelerate Us Into the Future »