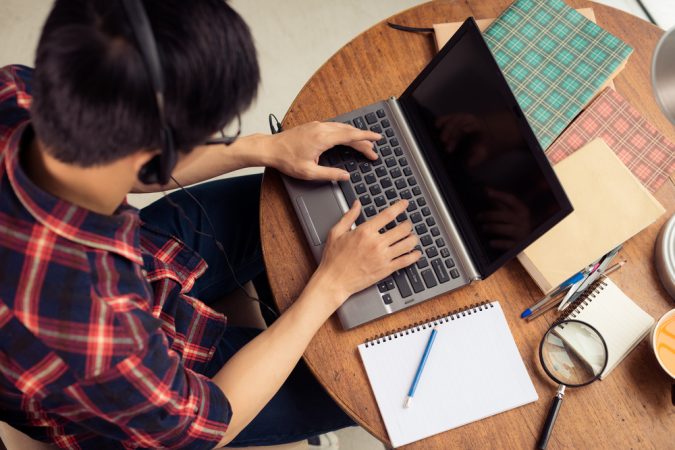 Most definitely it levels the playing field a bit more but there are three important factors to consider:

1) VCs get flooded with messages so getting yourself noticed continues being crucial, perhaps even more so given a flatter world. In my decade-long career as a VC I have seen on average 1000 companies a year. At Tau Ventures that number has actually been higher, closer to 2000. Unfortunately we cannot possibly do justice to every company so follow up selectively whenever there is a potential fit, in general 10% of the time. Tips on a company from a trusted source, say someone a VC has coinvested with, get more attention. Crisp decks rather than generic emails get more attention. In fact, as a good practice I encourage everyone to avoid sending “let’s chat business” to anyone, this is a message I typically get once a day!

2) VCs have specific mandates to invest. Most VCs will invest only in certain geographies, stages, or industries. For instance, at Tau Ventures we are comfortable with teams distributed globally but require the CEO to be based in US / Canada. We are also comfortable with go-to-market being anywhere in the world but look for the business focus / eventual market to be those two countries. Other VCs have different criteria which they will often spell upfront on their websites and I highly encourage entrepreneurs to look at the investment thesis before connecting with a prospective investor.

3) Getting investment from the right investor at the right time continues being critical. A Silicon Valley VC who doesn’t understand your market / product / technology is not a good fit. A VC offering high valuation who will end up making your life as an entrepreneur more difficult is not a good fit. Silicon Valley undeniably has the largest concentration of good investors and I fully believe that will continue being the case, but there are good investors elsewhere too. At the early stages especially getting local investors is better as they can be of bigger help than an investor at long distance. We are not going to be meeting only virtually forever — as the world comes back to a hybrid of offline / online modes of interaction, meeting your investor for coffee will still happen.

What’s the best way for a founder to get an intro to you?

Anyone can reach out to anyone these days, often through LinkedIn and email. In which case a crisp message, linking to the fundraising deck, is ideal. At Tau Ventures we go through everything and follow up whenever there could be a fit, typically in 10% of the cases.

But a better way of getting an intro is through warm connections, which is true of most business relationships. Examples in no particular order — an angel investor who shares deals, another VC who is a coinvestor, an entrepreneur that been invested by us, an accelerator with which we collaborate routinely, an advisor to the fund etc

What are you looking for in an initial virtual meeting?

It depends on three main factors. One, the VC’s knowledge aka how well we already know the team, especially the founder(s), the market, and the product. Two, the timing aka how quickly the round is moving, typically signaled if they have a lead already. Three, the entrepreneur’s knowledge of the fund aka why / how they are looking to work with the investor. The base case is when both sides don’t know each other well but know enough to be interested. In which case the initial meeting, virtual or not, is to establish a common ground for which to have future conversations. For us that typically means a half hour call with mutual intros, qualifying on fit, and deciding whether it makes sense to have another meeting to go deeper. We are believers in doing as much homework as possible and utilizing everyone’s time most efficiently, which means data can be processed offline so the conversations can focus on actual discussions.

How can early stage founders get more creative in their soft circle in this new environment?

Just like an image speaks a thousand words, a working product speaks a thousand slides. Being able to share a demo, a prototype, or ideally an actual live product often empowers an investor to understand quicker and better what the team is building. It also saves entrepreneurs time from having to rehash over and over the same facts in every conversation they are having.

Sam Corcos, Co-Founder and CEO of Levels recently shared his data driven approach to fundraising. What are your thoughts on his strategy of stacking investment notes?

Stacking investment notes as in raising one note and then immediately after raised another note on different terms? There are some situations where this is a great strategy, for instance you want to bring in a new investor typically a strategic one. SAFE notes for instance allow you also to keep raising indefinitely and they can be very powerful — as long as done safely because there is a risk of the entrepreneur diluting themselves unduly. In general I believe in having a definite date for closing a round to be better for entrepreneurs because it makes fundraising more efficient. Can’t tell you how many times I have heard from founders that they just want to go back to focus on building the business.

Other strategies that you would recommend/not recommend?

series B : business model taking off

So the advice is to calibrate the conversation accordingly. At Tau we invest primarily in seed and seed extension so we are looking for proof points around commercial uptake. If you have customers that is great, more often than not we are looking at the pipeline (sales cycle, total contract value, churn etc).

Has the pandemic changed the investment appetite of venture capitalists? How so?

It has been higher than ever before. There has been more money, more startups, more exits, in Silicon Valley and worldwide, than ever before. Except perhaps compared to the very peak of the Tech Bubble 20 years ago, which was an irrationally exuberant time that was not sustainable. At Tau we have been increasingly active, closing four deals in the month of January alone, granted they were all the result of on average two-three months of work.

How has due diligence changed with less in person meetings?

Really no change in substance, more in style. We still apply the same level of rigor, it’s just that we seek some answers in different ways. For instance, previously we may have had more coffee meetings with entrepreneurs to understand how they work. We will still validate that but will give a bit more weight on references, our coinvestors, on how entrepreneurs are building their team.

What can founders expect during due diligence?

It really depends on three main factors: stage, credibility, and how well investor and entrepreneur know each other. Earlier rounds, like at the seed stage, are a lot more about the team — what skill sets they bring, what are the gaps, how well would they work with the investor, why is this the team that could win etc. Later rounds are more about business metrics. Credibility is about entrepreneurs’ reputations and the more well-established they are, the quicker diligence tends to be. Finally, if two people know each other well obviously it makes the process of establishing trust easier. At Tau Ventures we will put in 50-100 hours of work before making an investment, 90% of which will be homework we do ourselves without taking up the entrepreneur’s time. And we also recognize that at the end of the day people don’t invest in ideas, people invest in people.

How can founders do due diligence on potential investors?

So glad you asked — we think it a big plus if entrepreneurs do good diligence on their investors. They can go through their online footprint including website, LinkedIn, crunchbase, articles etc to understand what themes and companies they have invested in. They can ask the investor for references of entrepreneurs they have worked with. They can ask around in the market what the investor’s reputation is. No single factor will give a full picture and there may certainly be some missteps in this process. But overall enough data points should paint a picture of how this investor tends to invest and work with the entrepreneur, it’s after all a business relationship that can last for a decade. I see due diligence processes as a two-way street where both sides seek to grok what each brings to the table.

Amit Garg I have been in Silicon Valley for 20 years -- at Samsung NEXT Ventures, running my own startup (as of May 2019 a series D that has raised $120M and valued at $450M), at Norwest Ventures, and doing product and analytics at Google. My academic training is BS in computer science and MS in biomedical informatics, both from Stanford, and MBA from Harvard. I speak natively 3 languages, live carbon-neutral, am a 70.3 Ironman finisher, and have built a hospital in rural India serving 100,000 people.
« Venture Capital is for the Elite only
Will Quantum computers help us minimize the damage caused by Covid-19? »

To Be Or Not To Be? 4 Principles For…