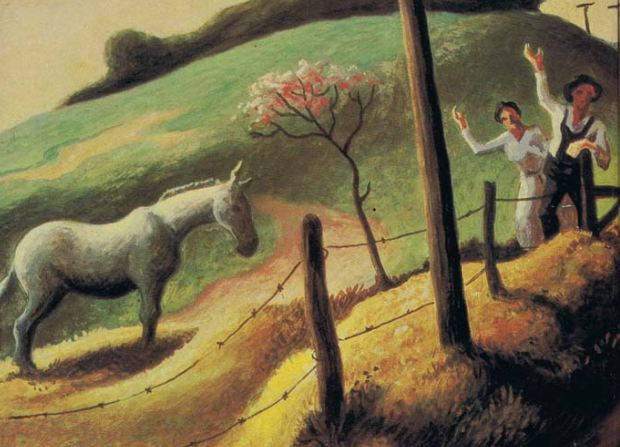 We resist solving problems we create. History illustrates our tendency to leave rather than solve problems. It reveals the flaw in our species highlighting our inability to alter our behavior and thought in light of changing conditions and circumstances. 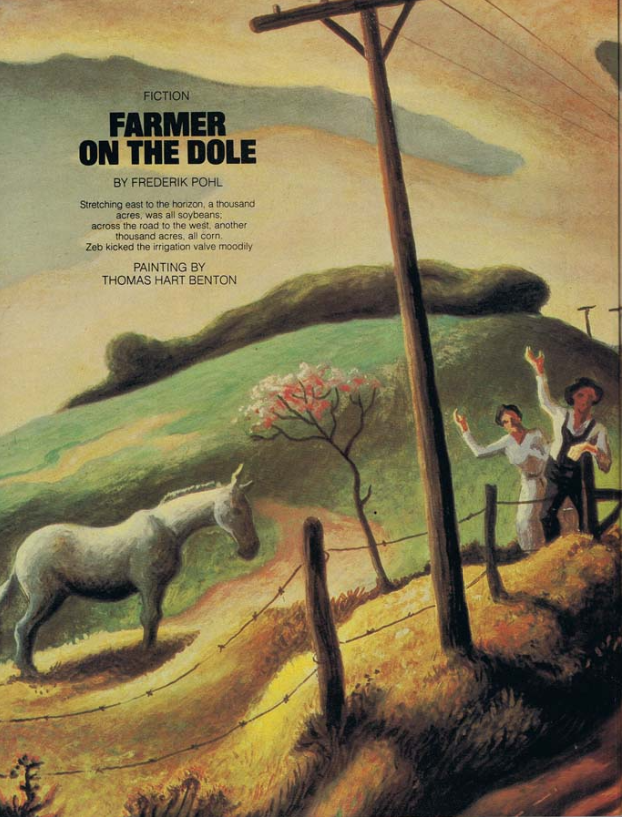 This story became unforgettable and continued to trouble me because it contains a hint of what concerns me most about humanity. What it suggests about us leaves a negative aftertaste that cannot be washed or flushed away. It is a story where robots are created to imitate and replace the humans who have abandoned the planet they ruined to go to new worlds to repeat the process. Those humans remaining behind on the dying planet are a bit lonely and nostalgic and want company. It is a repulsive view of man and his unwillingness to solve the problems he created. It reveals the principal flaw in our species. We run from problems. We do not like having to work to solve them.

Farmer on the Dole focuses on an old human experience and attitude. Pohl merely changes the time, place, and circumstances. He takes the story out of our time and simply inserts it into the future elsewhere. Our species pollute, abandon, and go elsewhere to do the same all over again. We never learn. We never really grow or evolve in our behavior. It is a continuation of our stone-age primitive slash and burn agriculture practices to planetary levels. In Farmer on the Dole, mankind has launched himself into the stars, but his brain is still the naked ape hunter-gatherer. We are still the clever monkey of our dimming past.

Following his line of thought, we must ultimately accept mankind as incapable of learning from even the vilest of his past follies. Looking at our world at this juncture, we must accept that verdict as plastics flood the streams and rivers, clogging and collecting over vast stretches of the oceans that determine life. The conclusion is clear. We proceed to flatten mountain tops to extract fossil fuels raising the planet’s temperature and threatening to end civilization as we know it. It continues so a few can live luxuriously for a bit longer before the curtain falls.

Rather than solving problems, Pohl’s humanity leaves and creates a complete fleet of robot androids to carry on in their absence. What a novel idea; our ultimate dream. Androids have all the appearances and behaviors of living creatures like us. We are capable beings; however, we are not smart. Is this not the way we are currently treating the Earth, our home? Do we just go on wasting the land and ruining the water and air until the planet becomes a desert (physically and spiritually)? Will Ursula K. Le Guin’s observation in passing in The Dispossessed become our reality? Why would we bother to use science and technology to create phantom robot images of ourselves and an equally ridiculous likeness of a plastic replica of our world? What a ludicrous farce.

Our ‘slash and burn’ thought pattern has persisted from our prehistoric predecessors extending back for more than fifty thousand years. The world view of the last 300 years has been dominated by a Cartesian-Newtonian paradigm (Renee Descartes and Sir Isaac Newton) that operates on the assumption mind and body are separated, that the body is a clockwork machine, and reality can be learned or determined by the study of the smallest constituent parts. Not even Quantum theory and Relativity have managed to change the multitude’s thinking in this regard. Everything we have learned in the past 30 or more years with the rise of social media and the implications of our use of big data has not penetrated these beliefs among most. Our faith persists the universe is an orderly and predictable machine. Isn’t God in control? What is there to be concerned about? The book has been written, and events appear as written. We need not be concerned or worried. This has been a useful approach for many, however, the ideas we invent to explain and ensure our survival today become the cause of our demise tomorrow.

Philosopher William Irwin Thompson said the future belongs to the mystic and the systems analyst. Thompson suggested we get beyond our simple exploitive view of nature as a machine to be manipulated. We need to adopt a compatible view of nature that sees its parts as revealing its function rather than defining the entire system as a function of a few elements. We will appreciate the complexity of the system and act more harmoniously. The systems analyst will monitor and report on the organism’s health and the day-to-day conditions of things. The mystic will be the interpreter of the direction the organism must move in the future.  The description and terminology Thompson uses are dated in light of all we have seen change over the past 40 years, but his thoughts are relevant and understood. Maybe there is a beneficial use for big data other than using it to control, manipulate, oppress, and enslave humanity.

Human minds internalize objects and make patterns. We internalize the universe as objects. These patterns, once constructed, are not easily changed or altered. The only way of altering embedded thought patterns, according to Thompson, is by one of three means. These changes result from insights often revealed in humor, because of a fortunate accident, and what the late creative thinker Edward De Bono called lateral thinking.

Our perception, according to Thompson, is based on the internalization of the mother/infant relationship, money (economic system), and religion. This illustrates how hard it is to change our way of thinking and perceiving reality. Our view of reality is dominated by ideas from 300 years past. The dominant economic paradigm dates from the same era. It threatens to destroy the planet, most life, and our civilization, but we resist changing or seriously questioning it. In addition to humor, the infant/mother relationship, and economics mentioned above, we should acknowledge our thinking also can be changed by catastrophic events. The ecological collapse caused by global warming and climate change, a massive planetary war, a meteor or asteroid strike, and the crumbling of governments across the planet due to the economic catastrophe caused by any of the above serves the same purpose. The universe within us is inseparable from the universe outside. One is the mirror image of the other. What we perceive influences, determines, and defines our reality. History shows us we rarely make such fundamental changes.

The human flaw may be due to our short life awareness of the consequences of our actions. We seem unable to appreciate the long-term implications of our behaviors. It reveals the inadequacy of our educational processes to foster a longer view. We have the acquired wisdom and knowledge of overcoming these shortcomings, but we refuse to employ them. Our resistance and comfort in wallowing in denial, ignorance, and superstition prevail. We must develop our awareness of the interrelationship of all things. We must acknowledge our role in the process. We must find and learn new ways to think about and approach our world. We must change our thinking from destruction and extraction of the planet to investing in its health and sustainability we require to survive and thrive. We will have time to explore the vast universe beaconing us. First, we must learn to solve problems in our own yard before we go about spreading our garbage and refuse across the cosmos.

Jerry Lawson Writer/ghostwriter/essayist (www.jerrymlawson.com), freelance journalist and artist. As a historian and biographer, Jerry operates a business focused on writing memoirs, biographies, and personal histories for private clients. Jerry was adjunct professor teaching history and government at several universities and worked as a reporter, editor, and managing editor of a newspaper. He acquired other experience working in industry, business, and banking. A recognized artist creating mosaics using hardwood scraps and pieces that are other’s trash. I live to write, create and make things using whatever medium is available. I am an explorer. I investigate, follow, and ponder whatever opportunities and issues life presents. I am curious about all things by nature and my interests and my writings and art are as varied as my experiences.
« Ethical considerations of Artificial Intelligence in the workplace
The healthcare industry is growing from strength to strength in 2021- Here’s how »