Markets speculate, more so, during times of low visibility and market volatility. The $1.9tr American Rescue Plan Act (ARPA) has raised concerns about inflation flaring up that will leave little choice with the fed but to raise the fund rate. Altering this rate alters multiple short term and long-term economic variables and hence markets would speculate in pursuit of better control. Money managers are already pumping in record flows into inflation hedged bonds. Most retail investors and traders in the markets today have started investing after the great financial crisis of 2008 and, thus, have little experience of market behaviour against the backdrop of rising inflation expectations. Steering through this madness without adjusting expectations could derail one’s investment thesis.

Let us dive deeper to understand the inflation expectations.

Economists turn to the Phillips curve, one of the main analytical drivers of inflation, to understand the relation between inflation and macroeconomic conditions. The model explains the stable and inverse relation of unemployment and inflation. To simplify, increasing unemployment decreases inflation and vice versa.

The Pre-pandemic Phillips curve was intact and during 2017-19 when unemployment reached below its natural rate, median CPI inflation rose to 2.5% (Q/Q). However, during the COVID-19 crisis, the model has puzzled the experts. Median CPI inflation was higher above the long-term forecasted level based on the Survey of Professional Forecasters (SPF) along with the rise in unemployment. A recent study by a team of IMF economists helped understand this puzzle and arrived at cleaner signals (US inflation: Set for take-off? Ball, Gopinath, Leigh, Mishra, Spilimbergo). Their finding was that the unusual labour market in 2020 with temporary layoffs had little effect on price dynamics. So, when they excluded job losers on temporary layoff from the unemployment data, inflation fell in line with the pre-pandemic Phillips curve (Figure 1.B). And in a way ruling out stagflation, the simultaneous rise of unemployment and inflation.

This explanation of the economists was not enough to the experts sitting on the other side of the camp – the inflation hawks. In this camp, there are strong believers of inflation skyrocketing and, also, parallels drawn to the extent of Weimar hyperinflation of Germany after WW1 in the 1920s. Oliver Blanchard, former IMF chief economist, reflects on similar times in the 1960s when government spending pushed unemployment to persist below the natural rate and inflation rose from 2% in 1961 to 6% by 1969.

The argument from the other side is the wrong estimates of potential output by the hawks to arrive at the output gap. Their estimate of the output gap is $2.5tr, almost three times Blanchard’s estimate and higher than the relief package.

Further, in the 1960s, government spending was not a one-time bill like ARPA but for a pro- longed period to finance the Vietnam war. If history rhymes, it could be with the 1950s Korean war during which the US rescue bill was a single time. There was a price rise at the outset but later stabilised by the end of the war.

Don’t bet against the Fed

The Federal Reserve has a dual mandate of average inflation targeting (AIT) and to promote maximum employment. They expect that a pent-up demand would temporarily push inflation higher after the economy opens up. Jay Powell, Fed chair, welcomes such a rise after a decade low inflation to anchor it at an average of 2% over the long term. He argues “too little” fiscal relief as a bigger risk than “too much”. Moreover, they are consistent in their approach and communication to reach an inclusive full employment target for all sections of the American society whatever be the inflation printed, ruling out the recent rise to base effects of 2020 at the start of the pandemic and supply bottlenecks. Moreover, being one of the most inflation feared institution historically, they have the necessary tools to control inflation the moment it goes out of control.

The Summary of Economic Projection is one of the best tools the Fed has in explaining where the rates are headed. (For quarterly updates follow https://twitter.com/ResearchfinAI)

Making sense in uncertainty for the retail investor

Over the long term, markets are expected to underperform the historical averages. It is important to understand that the higher the price one pays today to own an asset for future cash flows, the lower is the long-term return of that asset. High valuation means low future earnings. Further, low inflation will keep interest rates depressed which is accompanied by low economic growth and corporate earnings.

An outlook from Charles Schwab Investment Advisory estimates stocks and bonds to underperform in the next ten years to 2030 relative to their annualized returns between 1970 to 2020, as in the chart below. The US large cap stocks are projected to deliver annualized 6.6% return against an annualized 10.8% during the historical period. It also breaks the return into real return after removing the effects of inflation. In any manner these numbers are sliced, forecasted long term returns are low across asset classes. 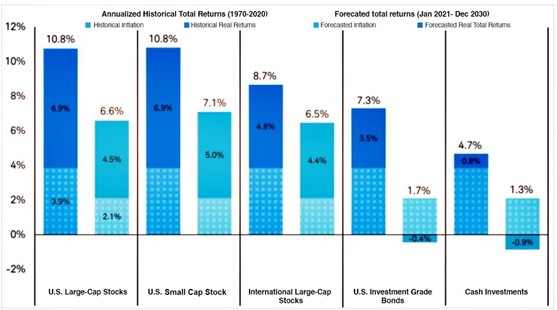 Diversification of portfolio is the good old advice to mitigate risk but that would only lead to averaging returns or at best, beat inflation. An ‘intelligent’ approach would be to deploy other strategies of investing instead of simply ‘buy and hold’. Carving out a portion of the portfolio to actively trade in stocks can enhance overall returns with the compounding effect (Read The simple trick to score a Ten bagger). Only to ensure that it is not mindless trading but systematic trading with the optimal risk controls.

In addition, brokerage free apps can help save fees to add to one’s returns. Yet, data analysis and quick decision making remains very critical to this short-term trading process. Artificial Intelligence and machine learning is already transforming this space making huge impacts to data science teams of large institutional investors and trading houses. Such AI models are superfast in identifying patterns and behaviours in historical data and can adjust to extreme events of volatility. While up until now, only institutions and hedge funds had access to these sophisticated technology and automation needed to trade systematically, companies like Researchfin.ai is changing that and empowering retail traders and DIY investors with AI- based mobile apps that automatically identifies the best risk-managed trade setups. This enables anyone to leverage the benefits of short-term trading.

Surajit Barua Surajit is currently VP-Revenue for Researchfin.ai, a fintech start-up helping retail investors and traders with trading signals and decision making on stocks. He has extensive experience in the investment management space and holds a Sloan Master's from the London Business School.
« Be Sure People Trust Your Brand As the One for Them
Asking AI the Wrong Questions and Getting a Frightening Result Is Your Fault? »