Uncle Sam has once again threatened to impose further tariffs on $200 billion worth of goods being exported from China as the trade war between the two largest economies of the world move up a notch up as neither seems ready to buckle. We are entering a phase of an economic realignment as new realities of a shifting paradigm in the globalized economy set in. The Capitalist model – which is a torch-bearer of free trade, open markets & unrestricted movement of labor & capital – seems to be running out of steam. This Economic model has actually been the strongest binding force among the developed western democracies. Global trade has already been falling in recent years with the new wave of protectionist policies that are emerging around the world. This BTW had started even before the current U.S administration took office.

The problem is not that the U.S is just after China, traditional allies like Canada, Europe & Japan have been slapped with similar tariffs. It is renegotiating current Trade agreements like NAFTA (North American Free Trade Agreement), pulled out of TPP (Trans-Pacific Partnership) & threatening to pull out of WTO (World Trade Organization) as well, while dictating IMF who to provide financial help or not being the single largest contributor to be the fund. And to top it all off, the attitude of the economic superpower has been hostile, to say the least. One can understand the problem for U.S with its ballooning debt, dwindling middle class, stagnant wages & an economic growth that pales in comparison to some of the emerging economies. With many of the economic cycles that we have seen over the years in U.S, the financial authorities have always taken a passive approach to run the interest based monetary system to the point where bubbles are created & eventually emergency measures need to be taken.

The last financial crisis of 2008-09 is a striking example in this regard when the Federal Reserve (FOMC) dropped the interest rates to near zero very quickly and have kept them at those levels for almost 9 years. This creates a real problem of overheating in the economy as the inflation bouncing back & the markets at an all-time high. Although the FOMC has started to raise rates this year & has shown its willingness to continue to do so, Trump is not excited about it since rising rates act as a countermeasure to his tax incentives policy for the corporations. This creates a conundrum for the central bank going forward whether to pursue their independent path or cave into the pressure of the President, the latter being a risky ordeal as mentioned earlier.

You see when the leader of the pack decides to break all the barriers, leave everybody in the lurch & pursue its own self-interest than it becomes a problem for everyone. And this is exactly how the World and most of all Europe & traditional U.S allies feel right now. Having said that U.S does have every right to fix its problems but I am pretty sure they could be tackled with an amicable & diplomatic approach where you don’t have to punish the whole world for tackling a bilateral trade issue. Case in point is the trade deficit with China which is a massive drag for America as evident from the chart below. 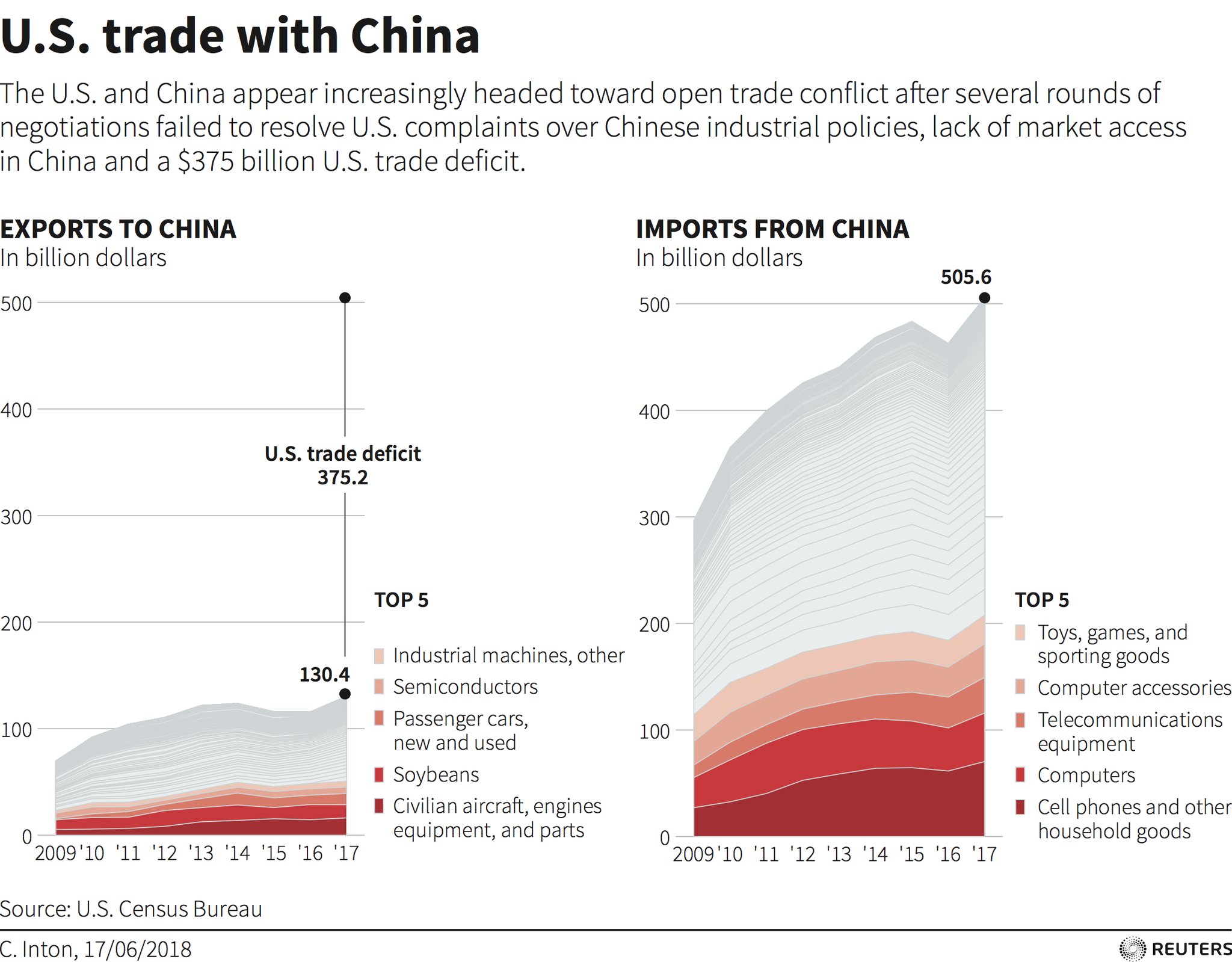 One thing that is certain – financial markets hate uncertainty. And the ongoing trade tension between U.S & major economic powers has the kept the markets on the edge. Europe has been sliding, China’s stock market has lost more than 20% of its value since the beginning of the year. And to add to all this emerging market currencies like the Turkish Lira, Argentina Peso, South African Rand, Indian Rupee & Indonesian Rupiah have all depreciated significantly causing undue strain & burden on these fragile economies. Argentina has recently negotiated an IMF bailout package of $50 billion – biggest in the history of the world. Their depreciating currency is certainly not helping the cause. Since most of the global trade takes place in the Greenback, a higher USD causes further strain for these economies. For now, though the U.S doesn’t seem to care since its markets keep making new highs, Greenback keeps rising, GDP growth crosses 4.0% mark & its companies showed record earnings thanks to tax cuts. Will it be sustainable with the pursuance of the protectionist policies is a question for another day.

The isolationist attitude of U.S is alienating friends & foes alike. America’s neighbors Canada & Mexico have been a little more receptive than others with renegotiating the current trading arrangements unlike some of the others. It has reached a point where Germany is calling for the formation of a new payments system independent of the U.S, as well as creating a European Monetary Fund and building up an independent SWIFT (current cross-border payment) system, as a means of rescuing the Iranian nuclear deal, which U.S pulled out of earlier this year. U.S has also been using economic sanctions & other arm twisting measures as a policy tool to deal with some of the diplomatic issues with other countries. Turkey was slapped with stringent Economic sanctions by U.S on the issue of its citizen detained there on charges of being involved in a military coup a couple of years ago. Similarly, IMF was “warned” not to provide any financial help to a battered Pakistani economy based on the fact that China might benefit from it since it is leading an initiative to build an economic corridor there.

While the U.S seems hell-bent on disrupting the current financial model & less interested in pursuing the leadership role, it also continues to leverage its economic might to influence the decisions of the countries & institutions working under the same model. Perhaps it would be wiser for a gradual shift to a better system which is fair to all. For a very long time the U.S has marched forward despite its macroeconomic problems as the single largest & most innovative economy in the world with the reserve currency under its belt. All of that seems set to change – China is set to take over America’s top spot within the next decade even by the most conservative estimates, technological adoption in Asia is outpacing that of U.S & the introduction of the digital payments in the form Cryptocurrencies would pose a serious threat to the hegemony of the mighty Dollar. A trade-off would be securing its self-interests & moving to a new paradigm with U.S playing a constructive role in bridging this Economic Divide.

Faisal is based in Canada with a background in Finance/Economics & Computers. He has been actively trading FOREX for the past 11 years. Faisal is also an active Stocks trader with a passion for everything Crypto. His enthusiasm & interest in learning new technologies has turned him into an avid Crypto/Blockchain & Fintech enthusiast. Currently working for a Mobile platform called Tradelike as the Senior Technical Analyst. His interest for writing has stayed with him all his life ever since started the first Internet magazine of Pakistan in 1998. He blogs regularly on Financial markets, trading strategies & Cryptocurrencies. Loves to travel.
« 4 Investing Routes to Profit from FinTech
DDI Blockchain Weekly (August 27th – September 2nd) »