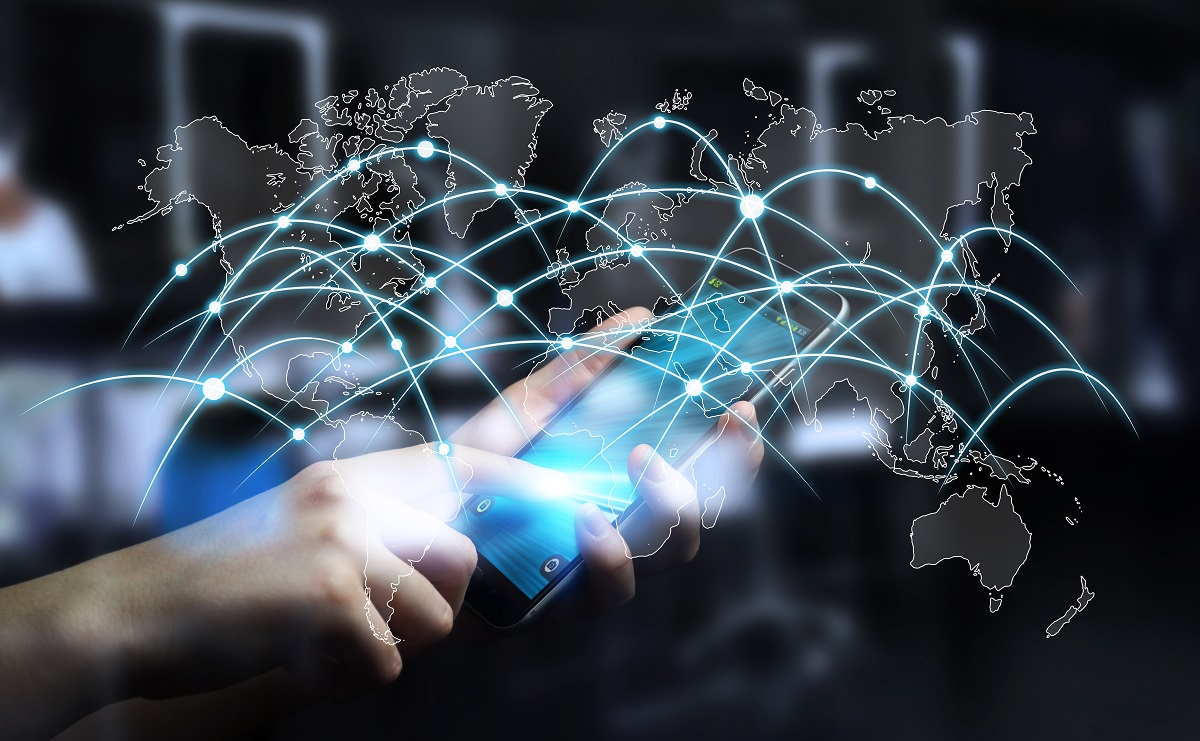 If you have ever tried to send money offshore to family or friends through a bank or other international payment services like Western Union, you know it’s expensive, cumbersome & extremely inconvenient. At least that was the case till about a few years ago when FinTech & Blockchain explosion took place. I have been using a service called Transferwise which is a UK-based startup working since 2011 whose features include low transfer fees, competitive fiat exchange rates & direct transfer to bank accounts in more than 48 countries and most important of all it’s all done online. Another popular PayPal owned money transfer App is XOOM, which can send money to 132 countries offering similar features. Enter Blockchain/Cryptocurrencies & the whole landscape is beginning to change. But before that let’s take a brief look at the current system being used for international money transfers by the banks around the globe.

To date, SWIFT (Society for Worldwide Interbank Financial Telecommunications) is the most widely used system for messaging & cross-border payments by financial institutions around the world. Each of more than 11,000 members of the SWIFT network are identified by a unique SWIFT code (e.g CHASCATTXXX) used to communicate on the financial network. It does not actually transmit physical money but processes payment orders which are settled at both ends by the corresponding banks (or financial institutions) with the association of intermediaries. SWIFT was the successor to the slow & insecure TELEX system when it went operational in 1974. However, with the major leaps in financial technology in the past decade or so have highlighted the shortcomings of SWIFT which was nothing less than revolutionary at the time of its launch. The decades-old system is at the cusp of being replaced or at the very least have competitors which are much faster, safer & decentralized. The biggest critique of SWIFT that has emerged in recent years has been the undue control of U.S over the transactions conducted on the network since Dollar is the reserve currency of the world & most the transactions in USD are routed through the American banks who can withhold the money. Also, the system is dogged by a host of other inefficiencies like slow speed, high fees & opacity.

Although SWIFT has done a commendable job over the years, the mammoth growth in the cross-border payments in the same period have highlighted the shortcomings of the current system. According to a World Bank report, 2017 saw remittances of over $440 billion to developing countries alone. Fragmentation in the current system has resulted in longer processing times & higher fees being passed on to the users thus encouraging them to find other avenues of transferring funds which are not considered part of the mainstream financial system, which has resulted in the flourishing of “underground economy.” This is where the Cryptocurrencies come in the picture especially Ripple & Stellar. 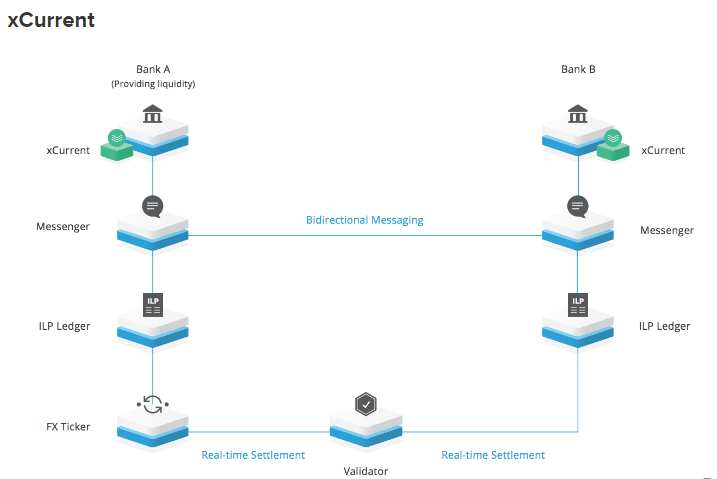 Ripple is the third most valuable Cryptocurrency by Market cap and was created with the need of providing the banking industry with an enterprise level software solution for money transfers. It is called xCurrent and is used for cross-border payments, which is far more efficient than its predecessor. RippleNet is basically a decentralized network of global banks & financial institutions employing the Interledger Protocol (ILP) to send and receive money. Keep in mind though that the native token of Ripple called XRP uses a different protocol called the XRP Ledger. xCurrent uses the benefits of the Real Time Gross Settlement (RTGS) which include the following: 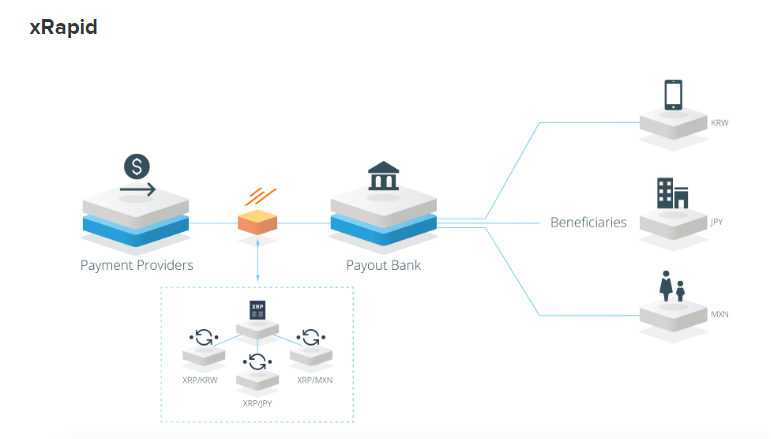 xCurrent provides a very useful functionality of swapping of all currencies – Fiats or Cryptocurrencies by using connectors that can hold their value. One of the most prominent features of this system is the bidirectional messaging platform between banks to fix minor errors & reduce delays in the processing. xCurrent has become the choice of more than 120 Global financial institutions over the past year or so with interest growing in this remittance solution product. Ripple has just announced that its next product xRapid will be ready to launch next month. xRapid is an upgrade to the xCurrent system providing a low-cost liquidity solution, especially in the emerging markets. This system will allow the swapping of different assets with the native XRP token, thus creating demand for the digital coin as well. Ripple is also working on the next in line product called xVia which will provide a user-friendly interface for the clients with a much simpler API hiding the complexities of the transactions going on in the background.

One would think that with such an adaptive & efficient product like xCurrent it would be a while before any competition on this level would emerge. Well, IBM has been actively involved in the Blockchain space for the past little while spending lots of money & resources on developing new products & forging new partnerships. IBM forged an alliance with Stellar (XLM) in October 2017 to develop a cross-border payment system which is finally beginning to take shape. Building on the previous relationship with Stellar & taking it a step further IBM launched a stablecoin called Stronghold USD which will be used as an intermediary digital asset in the in BWW (Blockchain World Wire) cross-border payment system. 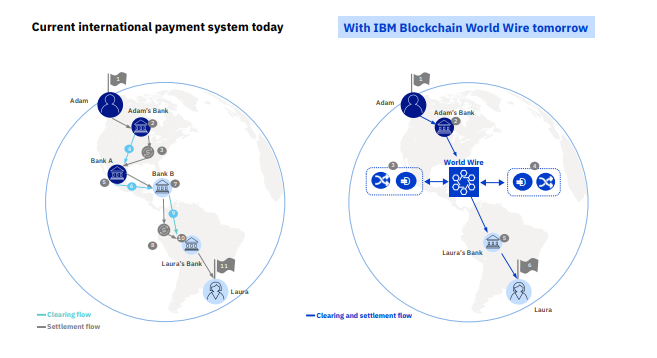 BWW uses Stellar’s decentralized network and is pretty similar to xCurrent in functionality & ease of use but it does have a few obvious advantages over its direct competitor. The first one being the wider scope of partnerships that exist between IBM & the multinational corporations, banks & governments. IBM provides technology solutions to all these clients and has better credibility to be able to convince them to use its product. Secondly, the Plug & Play nature of its system seamlessly connects with existing APIs of the banks ready to be deployed almost instantly. And lastly, Stellar-based stablecoin can act as a reliable digital asset intermediary in these banking transactions without the worry of value conversion. There is also an additional worry for Ripple with the talk of it being labeled as security still lingering as SEC has only cleared Bitcoin & Ethereum for not being securities.

IBM plans to showcase its product at a banking conference in October. Ripple, however, has gotten a head start with xCurrent & an increasing list of partnerships in the banking sector. Also, Ripple’s concerted efforts to improve its pioneering system gives it a tangible advantage over IBM’s BWW, which is just getting started. Only time will tell which one of them gets a wider adoption. One thing’s for sure though… days of SWIFT are numbered.

Faisal Khan Faisal is based in Canada with a background in Finance/Economics & Computers. He has been actively trading FOREX for the past 11 years. Faisal is also an active Stocks trader with a passion for everything Crypto. His enthusiasm & interest in learning new technologies has turned him into an avid Crypto/Blockchain & Fintech enthusiast. Currently working for a Mobile platform called Tradelike as the Senior Technical Analyst. His interest for writing has stayed with him all his life ever since started the first Internet magazine of Pakistan in 1998. He blogs regularly on Financial markets, trading strategies & Cryptocurrencies. Loves to travel.
« Looking to the Skies for Alpha
Infographic: Interested in a Crypto Career? »