For us October is a transitioning month from Fall to Winter with the beautiful colors in the backdrop, but for the Financial markets it has historically been a “scary” month with most of the Market crashes happening in this month. The last couple of days of carnage in the Global equities led by the slide in U.S stocks have pointed towards the correction that many had been anticipating. The bearish sentiment that started yesterday with a drop of more than 800 points in the Dow Jones average continued unabated today with another fall of 500+ points practically erasing all the gains made in the third quarter. The risk-off sentiment has spread across the globe to make things worse for the emerging markets who are already reeling off the losses since the beginning of the year. 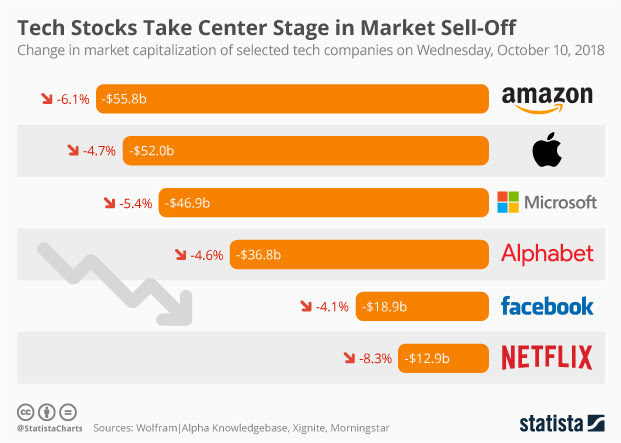 The sell-off in U.S equities was led by the tech stocks which have been the flag bearers of a resilient market. The extent of losses was widespread & across the board as evident from the chart above. Coming back to the month of October being bad for Financial markets is more psychological than data-driven, I mean yes most of the black days (biggest losses) coincidentally fall in this month (1929, 1987 & 2008) but the incidents preceding them had been set in motion months ago. Case in point is the financial meltdown of 2008 which took shape in October although the biggest catalyst (bankruptcy of Lehman Brothers) happened in March 2008. Also, the great depression of 1929 & the most recent housing meltdown of 2008 in actuality started in September, but the media was quick to label it as the October effect. 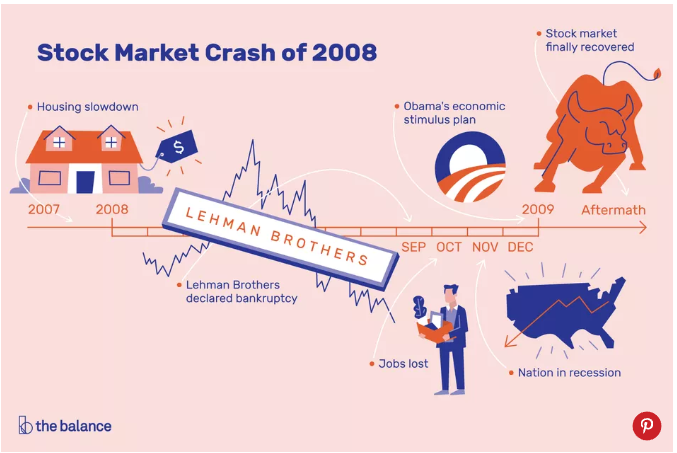 Moving on from the speculative & psychological factors to some charts & numbers. The SPX Index which had been comfortably marching along in a bullish channel since May took just two days to erase all the gains made in the third quarter & the strong support of 2795 has again turned into a resistance. The fall from grace has been pretty convincing so far on an accumulation of volume but the picture will clarify once the volatility settles down. And as I said before it’s not that everything came out of the blue – rate tightening cycle by the Federal Reserve has already begun, U.S treasury yields are at their highest levels with the unemployment reaching its lowest level in a decade & not to forget this is the longest running bull market in U.S history. Something had to give in. Everyone wants the market to keep going up, except the bears of course. We will find soon enough.

Forex markets behave accordingly as well, when the markets turn around and the risk off sentiment starts to prevail. As a general rule of thumb when the financial markets are doing well with risk assets in demand, USD tends to under-perform against other Majors. However, when the sentiment turns sour, investors flock to the safety of Greenback & Japanese Yen which are considered safe-haven currencies. So far all USD Majors are holding their own dynamic but that can change quickly if the bearish sentiment in Equities persists.

Cryptocurrencies have emerged as an integral part of the emerging financial ecosystem. The digital coins which had been trading in a tight range for the past couple of weeks decided to cave to the downside in tandem with the Equity markets. It is far more difficult to judge the price movements of the digital coins with a smallish history & the volatile nature of the assets. There were some negative headline news which might have contributed to the fall. Before I tell you what those headlines were, let’s take a quick look at the hourly chart of crypto kingpin Bitcoin. You can see the abrupt ending to the sideways consolidation with the bearish pressure persisting at the time of writing. As long as the resistance zone is not overtaken, further downside is favored. 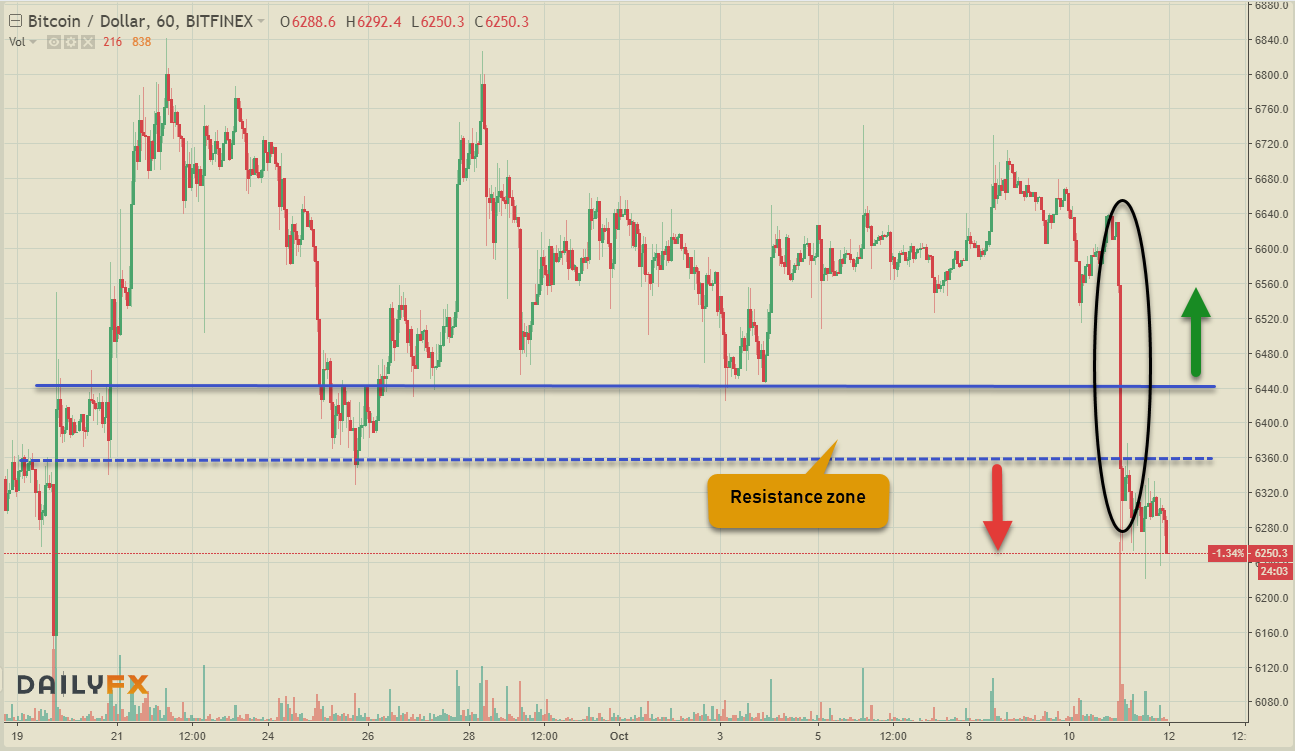 Coming back to the headliners in the Cryptoverse which are believed to have precipitated this latest downward move:

As always I don’t pay much attention to these sensational news in any of the financial markets unless of course, you are trading off your hunches & headlines. It’s always a good idea to sit on the sidelines & let the dust settle before jumping back in the game. Happy Trading & I sign off on a lighter note. 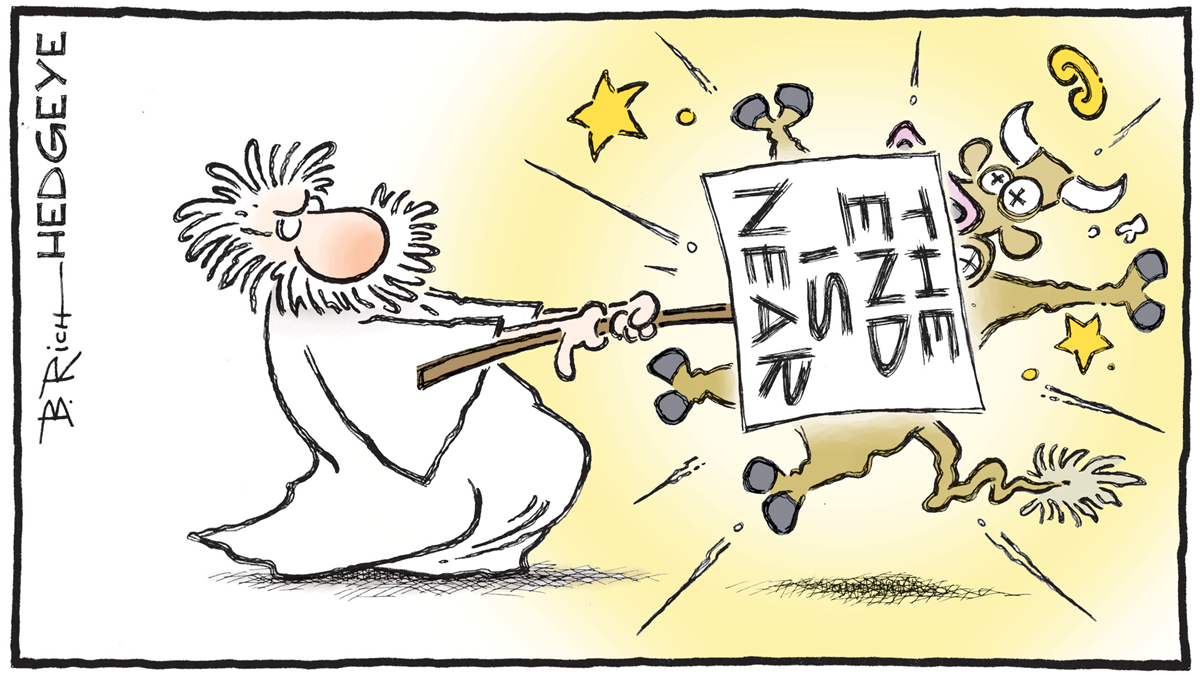 Faisal Khan Faisal is based in Canada with a background in Finance/Economics & Computers. He has been actively trading FOREX for the past 11 years. Faisal is also an active Stocks trader with a passion for everything Crypto. His enthusiasm & interest in learning new technologies has turned him into an avid Crypto/Blockchain & Fintech enthusiast. Currently working for a Mobile platform called Tradelike as the Senior Technical Analyst. His interest for writing has stayed with him all his life ever since started the first Internet magazine of Pakistan in 1998. He blogs regularly on Financial markets, trading strategies & Cryptocurrencies. Loves to travel.
« Neuroscience and Artificial Intelligence; How They are Perpetuating Each Other’s Progress
Decentralization, Diversification, and Antifragility »