Privacy has been one of the biggest hallmarks of the Cryptocurrency transactions on their blockchains. Ironically though, it has also been one of the most controversial features when it comes to monitoring of such transactions by the regulatory authorities. The global financial regulators have been critical of the point that some of the privacy-centric coins (Monero, Zcash etc.) can give the Con men of the digital world the opportunity to launder money & use it for other black market activities. For a common man though, the privacy of these transactions is one of the most enticing features since it keeps their identity anonymous.

Bitcoin is the pioneer of the Cryptocurrency movement signified by the peer-to-peer anonymous digital transactions. To improve the privacy of the bitcoin transactions, Dandelion Bitcoin Improvement Proposal (BIP) was published in June 2017 by Giulia Fanti (Assistant professor at Carnegie Mellon University) with the backing of the Zcash adviser Andrew Miller (University of Illinois Assistant Professor). Project Dandelion is a simple network layering solution which can be seamlessly integrated with the current blockchain networks. 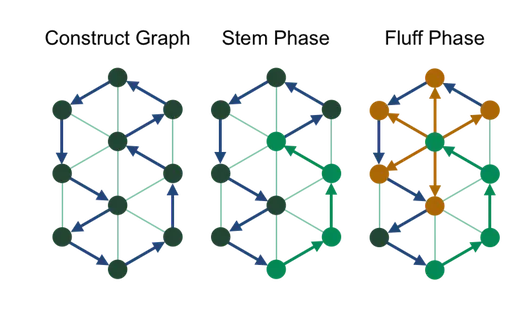 To understand how Dandelion protocol works, let’s quickly review how a bitcoin transaction gets processed on its blockchain network. Each time a transaction is initiated at a node (computer) it gets announced publicly to other nodes on the network. This announcement is a requirement of the blockchain network, but this also creates a chain that can be traced back to the announcing or the initial node. As the transaction moves along the connected peers, every node that receives the data is immediately available for query & although the IP address of the originally transmitting node is hidden, it is easily traceable by monitoring the path of the transaction on the network. This is where Dandelion steps in with its two-step privacy procedure to secure the transaction after making the initial transaction private.

This phase aims to avoid the trace back to the original transaction. Rather than making the transaction available to all the publicly connected peers, the possessing node passes on the data to a randomly chosen peer via a privacy graph thus keeping the transaction separate from the rest of the public pool. As the transaction continues to move along the chain it remains anonymous except to the peers who directly receive it. Finally it reaches a point where a broadcasting node announces it to the rest of the network through a diffusion process.

The diffusion process is the start of the Fluff phase. This phase marks the distribution of the transaction that happens normally in a blockchain network. Although the transaction is in public domain now, but it becomes very difficult to find out which route it took to get to this propagation phase. Mapping it back to the original node becomes extremely challenging since the initial phase was muddled with random Passovers. Comparing it to a normal transaction where it spreads out publicly to peers from a single point, with dandelion protocol the transaction takes a quiet path across randomly chosen nodes to finally end up diffusing the data from multiple peers all across the network. As solid as this proposal looked initially, there was some criticism from developers citing ‘deanonymization’ concerns whereby sophisticated hackers will still be able to identify the source of transaction by cross-checking its preceding patterns. To address this problem the developers of the Dandelion project published an update (May. 2018) to the original proposal called the Dandelion++, which has aimed to improve on the theoretical assumptions of the original paper. It has specifically addressed issues on the broadcast protocols of a Crypto blockchain network. Also, the team has built a small prototype network to test the new version of the protocol, its viability & how well it can block the traceable data of the transactions. So far it seems to be working as promised.

There have been other privacy solutions prior to Dandelion that have been tried & tested. Monero (XMR), for example, has been trying to implement the infamous TOR protocol used to access the Dark Web to its blockchain network for years, but it is resource heavy & difficult to implement and that’s the reason they are still struggling with it. The ease of network layering solution presented by the Dandelion protocol makes it much more simpler to assimilate with the existing networks. Working on these lines Zcoin (XZC) became the second digital coin after Bitcoin recently to implement the Dandelion protocol to its network as an added security solution. Dandelion is finally gaining acceptance & recognition of its effective privacy solution for the Crypto blockchain networks.

Faisal is based in Canada with a background in Finance/Economics & Computers. He has been actively trading FOREX for the past 11 years. Faisal is also an active Stocks trader with a passion for everything Crypto. His enthusiasm & interest in learning new technologies has turned him into an avid Crypto/Blockchain & Fintech enthusiast. Currently working for a Mobile platform called Tradelike as the Senior Technical Analyst. His interest for writing has stayed with him all his life ever since started the first Internet magazine of Pakistan in 1998. He blogs regularly on Financial markets, trading strategies & Cryptocurrencies. Loves to travel.
« ‘Workplace Diversity’ Still an Elusive Dream
Reducing your digital footprint by staying invisible online »