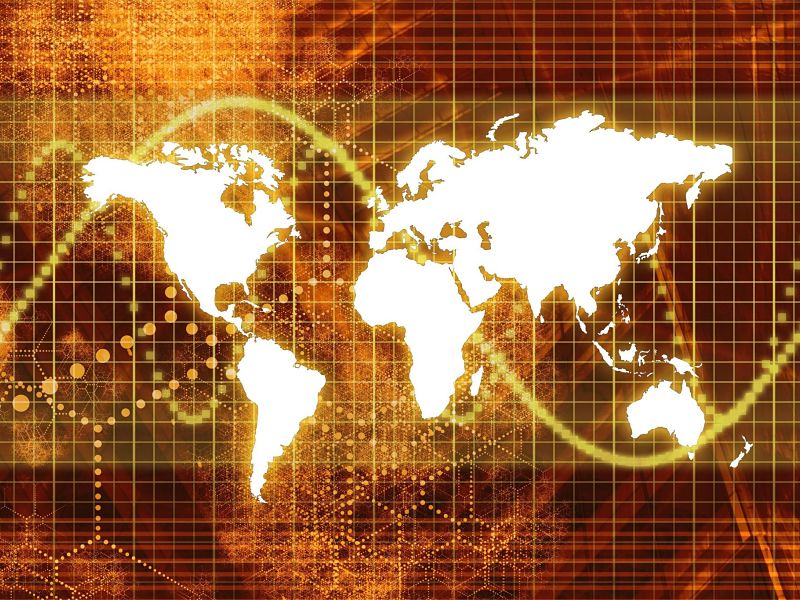 As we step into the first full week of Financial markets in the New year – the momentum for now seems to be in the same direction where it left off in 2018. Before we look at the data-driven look at the performance of the different segments of the financial markets in 2018, let’s quickly look at the synopsis of what transpired last week. The hallmark theme of volatility last year spilled over into 2019 which was evident from the whipsaw moves that we saw in Stocks & Forex last week. The measure of volatility CBOE Volatility Index (VIX) in U.S markets ended the year @ 25.42 with a gain of 132%.

The most interesting & perhaps notorious event was the Flash crash that took place in the Major currency pairs after the U.S markets closed on Wednesday, as the tech giant Apple announced its weak guidance, causing a massive sell-off not only in the tech sector & Equity markets in general but the spillover effect translated into double percentage point losses in Forex pairs. Although Forex is generally considered as one of the more volatile segments of the financial markets but this kind of move, in the transitory session between North America & Asia is almost unheard of. I selected four pairs to signify the moves that took place. As we have seen in the past as well, Flash crashes being blamed on “fat finger” errors & algorithmic trading, the case was no different this time. The investors were scratching their heads to make sense of the move as thin liquidity, risk aversion from Apple’s announcement, algorithmic trading (the usual suspect) & Japanese investors bailing out of loss-making positions were presented as the contributing factors. Whatever the fact, a lot of people made money while others lost as stop losses got triggered! 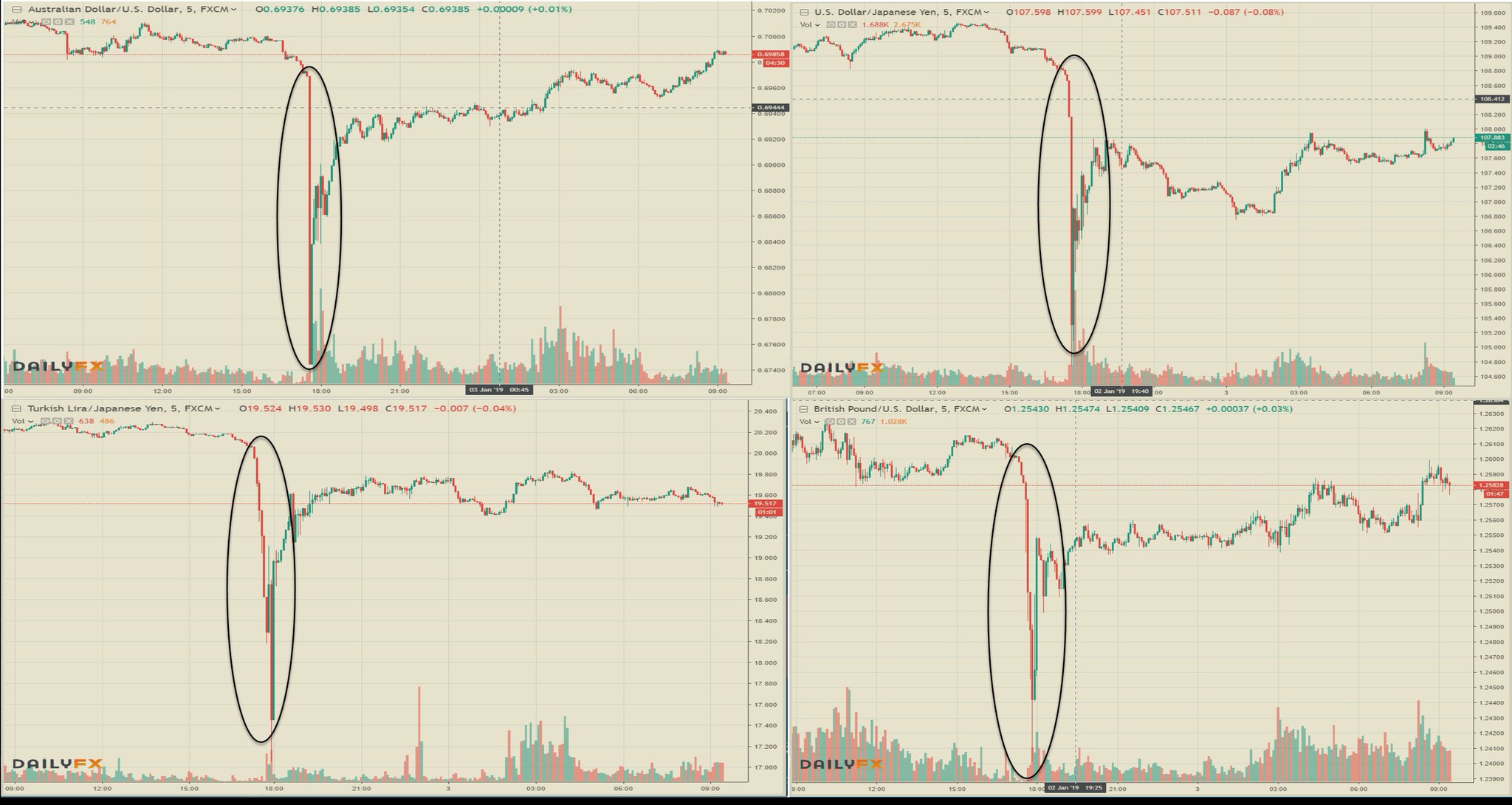 Talking about Apple, the forbearer of the “1-Trillion market cap club” – by being the first one to get there has now slipped almost 40% from the peak of $233.47 reached on October 3 last year. Its dollar valuation has slipped to $674 billion sitting at the fourth spot behind Microsoft, Amazon & Google. The loss in Apple’s market cap was bigger than the valuation of the 496 individual members of the S&P 500 index! More precarious however are the ripples & shock waves that this has sent across the global tech sector, which had been instrumental in the longest running bull market in U.S history. The week, however, ended on a positive note with a major rebound taking shape from the euphoria that resulted from the kick-off in U.S/China trade talks & U.S Federal Reserve chairman, Powell finally toning down his hawkish rhetoric about interest rates trajectory, saying they would be patient with further interest rate hikes. This also sent the major currencies reversing their earlier risk aversion moves against the Greenback. The Cryptos however stayed in consolidation mood with Bitcoin remaining in the familiar $3750-$4100 range and the total market cap sitting @ $133 billion, with BTC dominance sliding to 51% as the general crypto showed signs of recovery at the time of writing.

Moving on how the broader asset class performance for the year 2018, it was blood on the streets for most of them. The only green was the Dollar Index, which showed sustained gains to end the year posting the strongest performance since 2015. The Fed tightening cycle which is way ahead of the other central banks around the globe was one of the contributing factors with the market risk aversion sentiment, which generally lifts the Reserve currency of the World, being the other one. Precious commodity of Gold moved in the other direction owing to its inverse relationship with the Greenback. The two biggest talking points from the chart above are the massive downturn in the Emerging market stocks & the crash in the Crude Oil caused by the supply glut & slowing global economy. 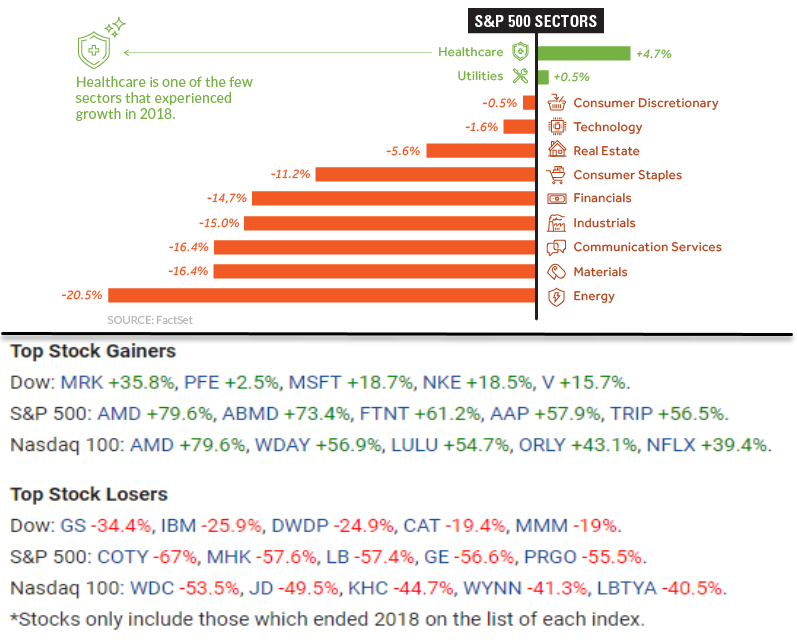 Breaking down the individual sectors’ performance in the U.S benchmark index of S&P, Healthcare was one of the two sectors that recorded a gain followed by a meager plus performance by the Utilities. Rest was a sea of red with the Energy sector as the worst performing owing to the plummeting Oil prices. Marked reversal in Financials was a cause of concern as Financials usually perform better in a rate tightening cycle. With the Feds moving to a more neutral stance on rate hikes, financials may continue to face weakness going into 2019. The broad-based weakness that plagued the U.S markets at the tail end of the year will continue to haunt the investors in 2019 with the uncertainties surrounding the markets regarding Global Trade disputes, Fed rate hikes trajectory, China slowdown, Brexit & Emerging market woes.

As said before, the mighty Dollar continued the offensive on its counterparts through most of 2018. The only other currency that gained from the risk aversion is the Japanese Yen, which is considered a safety hedge along with the Greenback in terms of uncertainty & market downturns. The biggest loser in the Majors was the Australian Dollar (Aussie) which lost 9.9% to its lowest level in 10 years. Risk currencies like Aussies tend to lead when the markets are performing well, also posting the biggest losses when things go haywire. 2019 might see an ease off the U.S Dollar strength with the U.S Federal Reserve showing some willingness to “listen” to markets regarding rate hikes. Having said that though, with the continued sour market sentiment would see limited losses in the USD.

Sufficed to say it was the worst year for the digital assets or Cryptocurrencies as the bearish momentum continued to flush out the investors who got overly excited and bought into the exuberance that existed at the end of 2017. With most of the Cryptos seeing losses of over 80%, a lot of the pundits have already written obituaries for them. While it is still difficult to say if & whenever the bottom will be called in play, the recent divergence of Cryptos from bearish Equities is giving some hope to the bulls. A lot of these digital coins might cease to exist, but writing off the Cryptos totally would be a long shot. The new year might turn the fortunes for the digital assets as SEC moves closer to a decision on a Bitcoin ETF with friendly regulatory regimes emerging in different parts of the Globe. Innovation in trading products, tokenization of assets & increasing realization among financial authorities about their utility in future may play a bigger role in their adoption & eventual reversal of fortunes in terms of price. Although all these factors might make the price movements a little more mundane as the digital assets begin to achieve maturity & mainstream adoption. 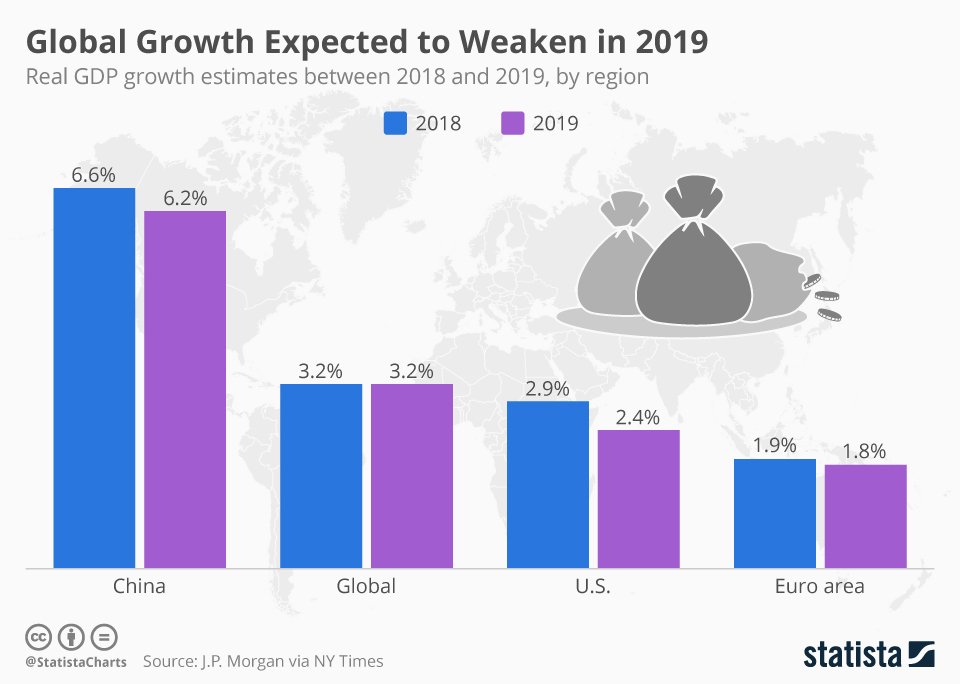 Overall, it seems like 2019 is going to be a challenging year for the financial markets with a lot of Geopolitical, economic & regulatory issues that would need to be sorted out. According to J.P. Morgan (figure above), most areas of the globe are going to see an economic slowdown led by China, which is considered the global growth engine of the World. While the global average growth is expected to stay stable @ 3.2%, the uncertainties emanating from the emerging markets might skew the number downwards as the year progresses. 2019 starts with Brazil & Mexico with two populist leaders who are facing challenging economic reforms in their respective countries which could curtail economic growth significantly in Latin America’s two biggest economies. While people in emerging markets of India, Nigeria, Thailand, Indonesia, South Africa & Argentina are heading to the polls to validate or disapprove of the economic policies of their current governments.

Signing off here with a comic on the lighter side of things. Best of Luck for 2019! 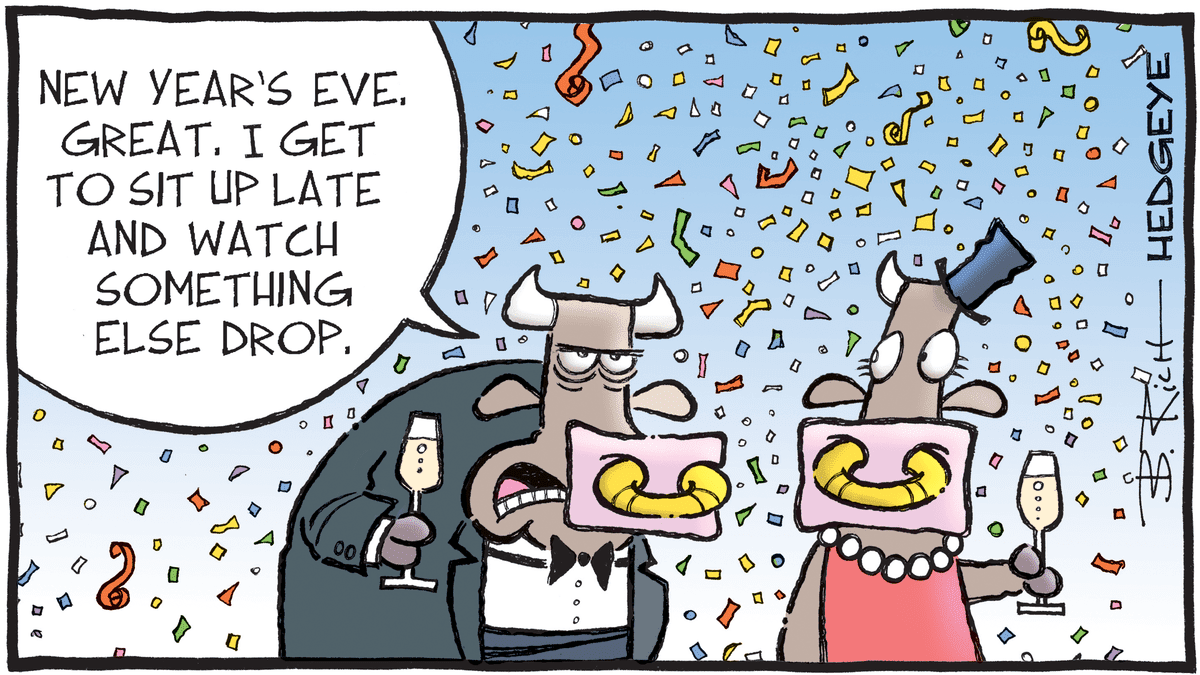 Faisal is based in Canada with a background in Finance/Economics & Computers. He has been actively trading FOREX for the past 11 years. Faisal is also an active Stocks trader with a passion for everything Crypto. His enthusiasm & interest in learning new technologies has turned him into an avid Crypto/Blockchain & Fintech enthusiast. Currently working for a Mobile platform called Tradelike as the Senior Technical Analyst. His interest for writing has stayed with him all his life ever since started the first Internet magazine of Pakistan in 1998. He blogs regularly on Financial markets, trading strategies & Cryptocurrencies. Loves to travel.
« Forex trading – understanding the basics before you start
Crypto Investors Alert: Tokenized Stocks, Bakkt’s Asian competitor & Japan’s ETF »