Entrepreneurs and Unemployed People: The Two are Shockingly Similar 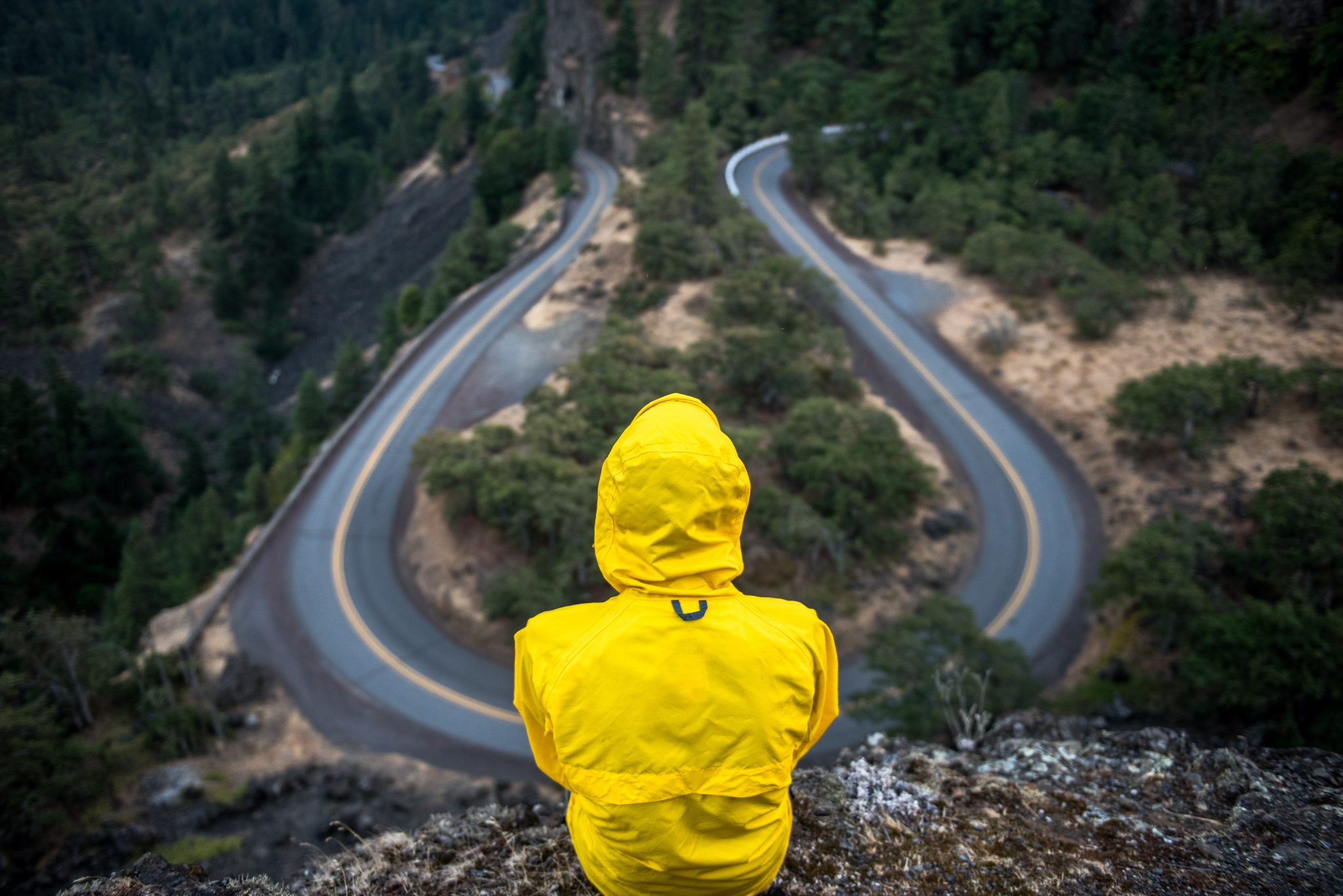 Let’s just preface this whole thing with the fact that it started with a joke of a Venn diagram.

One of my friends made an off-hand comment that she needs to start coming to more entrepreneurial meet-ups with me because maybe THAT will get her to stop dating “unemployed stoners.”

I told her the two are eerily similar. And this image proved my point: 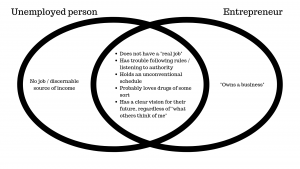 For context: I’m both a business owner and a standup comic.

My situation is such that I get to meet high performers in business and people who are barely scraping by financially because they want to “focus on their art.”

(Side note: You don’t HAVE to suffer to succeed with your art. But that’s a digression.)

Each time I go to an entrepreneurial gathering, I’m in awe of the things the people around me are known for. Empires are created and built. These people take a thought and turn it into something you can touch.

And each time I go to an open mic to work on some jokes, I’m equally in awe. These people know humanity. The rough, jagged edges of it. The things no one wants to talk about in private situations are brought to the stage in a relatable & cathartic way.

They see more than most people do. AND they can put words to it without shame.

But most of them are unemployed, or barely employed.

I hear a lot about what it’s like to scrape by in a city whose cost of living is ever-rising. And it’s not because these people are “dumb.” They’re incredibly intelligent.

So, what’s the one thing that makes these two worlds – the entrepreneurs and unemployed folks – so different?

The mentality towards work is different.

Please note that none of this pertains to people with genuine mental / physical health barriers that prevent them from working.

But from what I’ve seen in my few years as an entrepreneur, they truly display most of the similar characteristics of an unemployed person:

However, the original Venn diagram above is a little bit off.

There’s one big difference between the two, and it’s been added to this second version of that original Venn diagram: 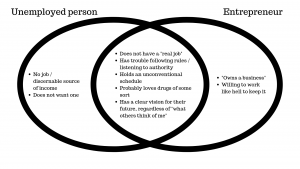 Work mentality is the key to success in business

I was raised to think you go to work, you don’t like the job, and then you come home. It wouldn’t be called work if you liked it. But you do it for the money, and that’s life.

No offense to those who choose that route, but I’m incredibly disagreeable. I’ve got multiple personality tests to back that statement up, too.

That being said, I don’t like those rules. Hint number 1 that I should’ve known all along I wouldn’t have a conventional career.

But just because I don’t like the idea of working on something that I hate doesn’t mean I won’t work. I just need to find a point or a passion to it.

And this is what differentiates the unemployed from successful entrepreneurs.

Entrepreneurs believe they can take their passion and turn it into something profitable.  Those stuck in the unemployment loop don’t see that possibility.

Don’t get my message wrong: there’s an incredible amount of privilege that comes along with being able to start your own business. Many entrepreneurs put in their 5-20 years of service “to the machine” before saving up the money & courage to jump out on their own idea.

However, the mentality is what allows that leap and eventual success.

Why do humans hate to work?

But I think this is a two-fold issue:

In my own situation, balanced between business ownership and comedy, I see the resistance to point 2.

But they’re both rooted in passion. In pursuing something unconventional. The main “thing” being built is enjoyable to the architect. And they’re constant fights with Resistance, as Steven Pressfield calls it.

And while you might struggle short-term in either of these fields, you’re on the path to leaving that financial insecurity behind.

Because you’re not averse to working for something.

The anti-work mentality of the unemployed

It’s a little ironic to mention this side of things. Because I see this in my comic friends when it comes to “day jobs,” as most artists call them.

This is where the “work isn’t fun” mentality really shines.

Comics want to make money at their art. Most artists do.

But they know that they’ve got to pay the bills somehow until that happens. So, they get a job doing something they don’t care about so they can afford to be in a city that allows their art to grow.

They switch job to job frequently and flirt with unemployment a lot because of it. They don’t care about what they’re doing for money, so it’s all the same to them.

This works for some people until they “hit a break” in their art.

But for others… it leaves them feeling averse to any work, including on their art.

The monotony of the day job literally drives some people to quit their art and feel helpless altogether.

This is why I think it’s vital, even as an artist, to find a “day job” you don’t hate.

It keeps you productive in all areas of your life by energizing – rather than draining – you.

And if you’re an entrepreneur… you’re already making money at the thing you’re passionate about.

Even if it’s not a lot, do you realize how difficult it is to do what you’ve done? You’ve created a revenue stream that didn’t exist before you caused it to. That’s incredible. Don’t lose sight of that.

How this mental shift can apply to employees

Not everyone is an entrepreneur or an artist, or even wants to be either of those things.

Most people like having some sort of a steady schedule, and you’re honestly more important to our society than a lot of the business owners out there.

You’re the “get shit done crew,” as one of my clients calls it.

But this mental shift can still apply to you.

And if it’s a job you sincerely hate and cannot find joy in – why not consider a switch to something else?

With the beauty of tools like LinkedIn, it’s easier than ever to connect with people in the industry you want to be in. My friend Destiny Lalane is a wizard at using this platform to attain great business growth, consistently.

Entrepreneurs and unemployed people can shift their lives with this knowledge

That might sound a bit dramatic, but it’s true.

As soon as you allow yourself to understand that working on something you enjoy can also bring you financial success… your life will never be the same.

It might be a crazy ride, but it’ll be well worth it.

Instead of quitting everything, you’ll want to stick to something. You’ll find a purpose to the hours you clock each day, even if they’re simple admin tasks (which business owners often do, mind you).

Be willing to put in the work. Make it easier on yourself by putting that energy toward something that you love.

And that, dear reader, is the thing that will keep you in the entrepreneurial circle – and out of the unemployed circle.

Allison Wojtowecz Allison is the creator of Flabs to Fitness, Inc., an online fitness, nutrition, and wellness coaching platform and content creation firm for other health-oriented companies. She has a B.A. in Acting and a B.S. in Kinesiology from the University of Texas at Austin and still lives in Austin today. She uses both of her degrees professionally, building her company by day and performing Shakespeare and standup comedy by night. She enjoys studying mindset and its implications for human behavior...including investment decisions. In her "spare" time, she enjoys hunting, reading, and traveling.
« Top 5 Skills Needed for the Future of Finance & Business
Crypto Diaries: Facebook’s secretive Project Libra coming out of the shadows »

Charlie Munger’s 3 Mind Hacks That Will Keep Your…