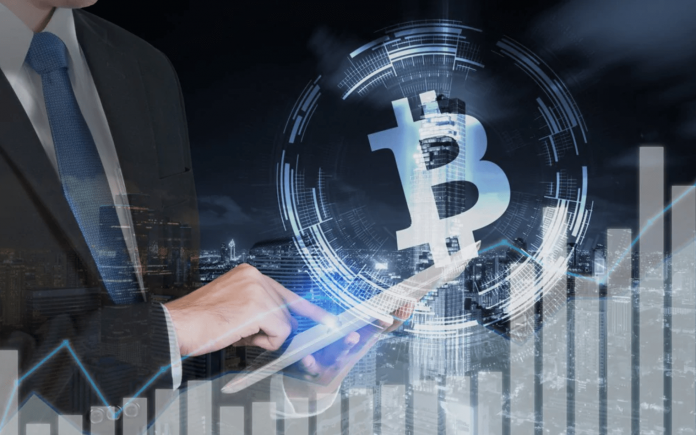 Bitcoin has touched $9K so far this year – price levels not seen since July 2018. The crossing of the psychological level of $10K is still a level that needs to penetrated convincingly to confirm a reversal in the bearish trend as far as I concerned. Nonetheless, the way the crypto kingpin BTC has sustained the gains for the past couple of months is a good sign pointing towards long-term recovery.

According to a recent report for diar – a data analysis company which provides expert insights into the global digital currency trading industry, Bitcoin supply holdings have shifted ever since reaching the recent bottom. The most significant pattern that has emerged is that of Institutional investors scooping up massive amounts of digital assets at these discounted prices. Let’s review the four charts presented in this report to see the impact of this new transition.

Three notable trends emerge from the chart above – Retail size investors have increased steadily in all four categories with the biggest increase in 0.1-1 BTC category. The report states that over 26% of circulating supply or $36 billion worth of Bitcoin now resides in addresses having a balance of 1-10K BTC. These ‘Firm size’ addresses which held under 20% of circulating supply saw a spike of 7% in less than a year. Ever since the bitcoin bottom of $3200 in December 2018, this bracket has seen 1.2 million BTC added. The analysis has not taken into consideration the one time movement of 856,000 bitcoins by Coinbase in December 2018, which now stand at 760,000. Even with this exclusion, over 450K of increase in this bracket is by far the largest in of all the categories. And finally, bitcoins held exchanges in the last two categories have seen a sharp decline. The trend is clear – retails investor sentiment is steadily growing, institutional investors are spiking while the exchange holding is seeing a massive decline. 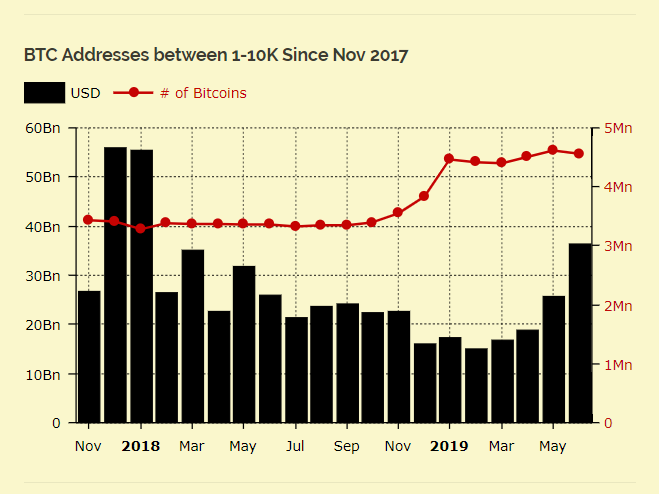 The second chart shows the relationship between the amount in USD invested and the number of bitcoins held in the BTC addresses between 1-10K since Nov. 2017. The $40 billion amount invested remained steady for almost a year before beginning to see an uptick starting in Nov. 2018. The increase preceded the BTC address gains which began to show up in February of this year. Since the start of 2019, 100K bitcoins have been added to this bracket & the amount in these addresses now stands at $6 billion (excluding Coinbase coins) more than the last time BTC was at $8000. 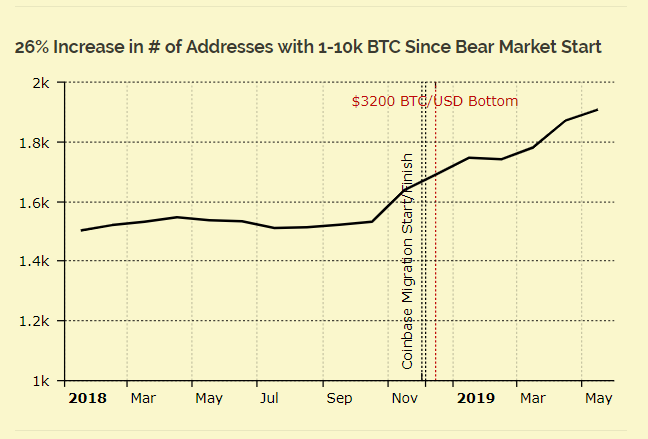 The chart above shows the 26% increase in the number of BTC addresses that we have seen since the bear market of 2018. Again the massive Coinbase transfer was the kick-starter for the increase, which is in an upwards trend as we speak. While the 856,000 BTC transfer in late 2018 by Coinbase was an anomaly, it nevertheless provided the impetus for the current bull run.

And finally, the BTC holding distribution chart shows how bitcoin holdings are spread across Retail investors, Institutional holders & Large Crypto exchanges. While the retail traders & investors have remained steady around 38% of the total holdings, there has been a re-alignment between the BTC holdings of Crypto exchanges & Institutional investors. The former has seen an exit of 300K bitcoins since the start of 2018 with their share declining by 20% (from 20% to 16%) within the last 6 months alone. Firm accounts on that other hand have seen an approximate increase of 10% – from 42% of the share to 46%.

Cryptos are certainly on the move led by Bitcoin and this time it’s not the exuberant retail lot that’s driving the price action, but the Big money makers who are in the driving seat…

Faisal Khan Faisal is based in Canada with a background in Finance/Economics & Computers. He has been actively trading FOREX for the past 11 years. Faisal is also an active Stocks trader with a passion for everything Crypto. His enthusiasm & interest in learning new technologies has turned him into an avid Crypto/Blockchain & Fintech enthusiast. Currently working for a Mobile platform called Tradelike as the Senior Technical Analyst. His interest for writing has stayed with him all his life ever since started the first Internet magazine of Pakistan in 1998. He blogs regularly on Financial markets, trading strategies & Cryptocurrencies. Loves to travel.
« Business Partnerships: Their Importance for Expanding Overseas
Training AI to predict Myers-Briggs Personality Types From Texts »