In the US there are more food outlets than ever before, which is to be expected given increased prosperity and population growth. But what is even more significant is restaurants are growing at twice the rate of population, creating massive labor shortages. The increasing market need, combined with the need to differentiate, has given rise to various robot-staffed restaurants from The Tipsy Robot bar in Las Vegas to the Spyce restaurant in Boston. But that’s the tip of the iceberg — it’s startups that are both riding and creating a tidal wave of change. This post is focused on three major trends in the space.

Food-making was an area where startups were unheard a decade ago given long-standing truisms about low tech and low margins. Yet now there are now dozens of well-capitalized ones given increasing tech and expectations of higher efficiencies. Indeed, VC funds typically have a 10-year horizon, so the fact that capital is pouring into food automation reflects a general belief the food business is changing dramatically. The table below highlights some of the more prominent startups in alphabetical order, with the caveat that “total $ raised” is the figure disclosed publicly which is often underreporting reality.

full disclosure: I am an investor in Blendid through Tau Ventures.

2) Human In The Loop

Automation, as we know it today, is much better than humans at many things. Robots can chop vegetables faster. Robots can follow the same recipe without tiring. Robots can track infinite orders. But the key is many things, not all things, and in fact all the examples described before are narrow tasks. Ask a robot to improvise and even the best unsupervised algorithms today will halt. They are also terrible at service. Not to mention humans are the ones that ensure machines have enough raw materials and are not mal-functioning. Indeed the very first startups in food automation, which tried to leverage technology to solve all problems, didn’t achieve runaway success. Which is how you end up with headlines like “How The Trendiest Grilled-Cheese Venture Got Burnt.” Humans in the loop ie people remaining essential to a robot-run process is the overwhelming ethos of these emerging companies.

The food business overwhelmingly runs at low margins, on average 2% for restaurants, so the real savings of automation come at scale. Think fast-casual chains with hundreds of locations rather than single-location, typically higher end restaurants. Shouldn’t be a surprise why Americans view fast food workers as the number one profession most likely to be disrupted by automation, even as far back as 2017. 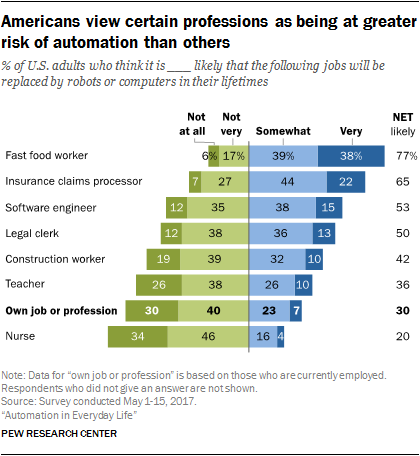 Amit Garg I have been in Silicon Valley for 20 years -- at Samsung NEXT Ventures, running my own startup (as of May 2019 a series D that has raised $120M and valued at $450M), at Norwest Ventures, and doing product and analytics at Google. My academic training is BS in computer science and MS in biomedical informatics, both from Stanford, and MBA from Harvard. I speak natively 3 languages, live carbon-neutral, am a 70.3 Ironman finisher, and have built a hospital in rural India serving 100,000 people.
« Decentralized Finance Part 2: The Behavioral Science Perspective
Robotic Agents and Human Principals »