The Math in ML: Cosine Similarity 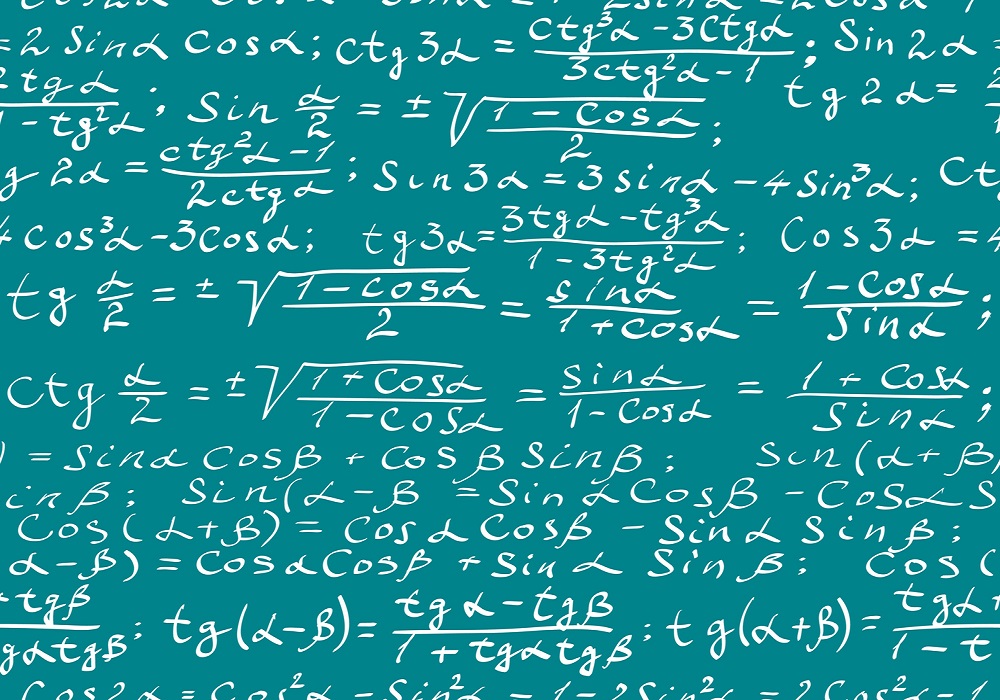 In Machine Learning, we frequently express the similarity between two vectors as cosine similarity. What exactly does that mean? What has ‘cosine’ got to do with similarity?

Well, there is Math in ML and cosine similarity between vectors has everything to do with Math. Let us refresh what is a vector, and then we come to what is the cosine between two vectors.

What is a Vector?

A vector is a column of numbers enclosed in brackets, like this.

As a special case, a two dimensional vector is a column of two numbers enclosed in brackets, like this.

Two vectors in Cartesian space are considered to be equal if

Hence, we can have another arrow in the same Cartesian space equal to u if it is of the same length and in the same direction, and parallel to u. It could start at a point other than O.

Like two dimensions, here also any other vector that is of the same length as u, parallel to u and has the same direction would be considered equal to u even if it starts at a point other than O.

For any positive integer n greater than or equal to 1, an n-dimensional vector is a column of n numbers enclosed in brackets.

An n-dimensional vector still exists, though we are unable to represent it using an arrow in the Cartesian space for n greater than 3.

The addition of two vectors is defined as 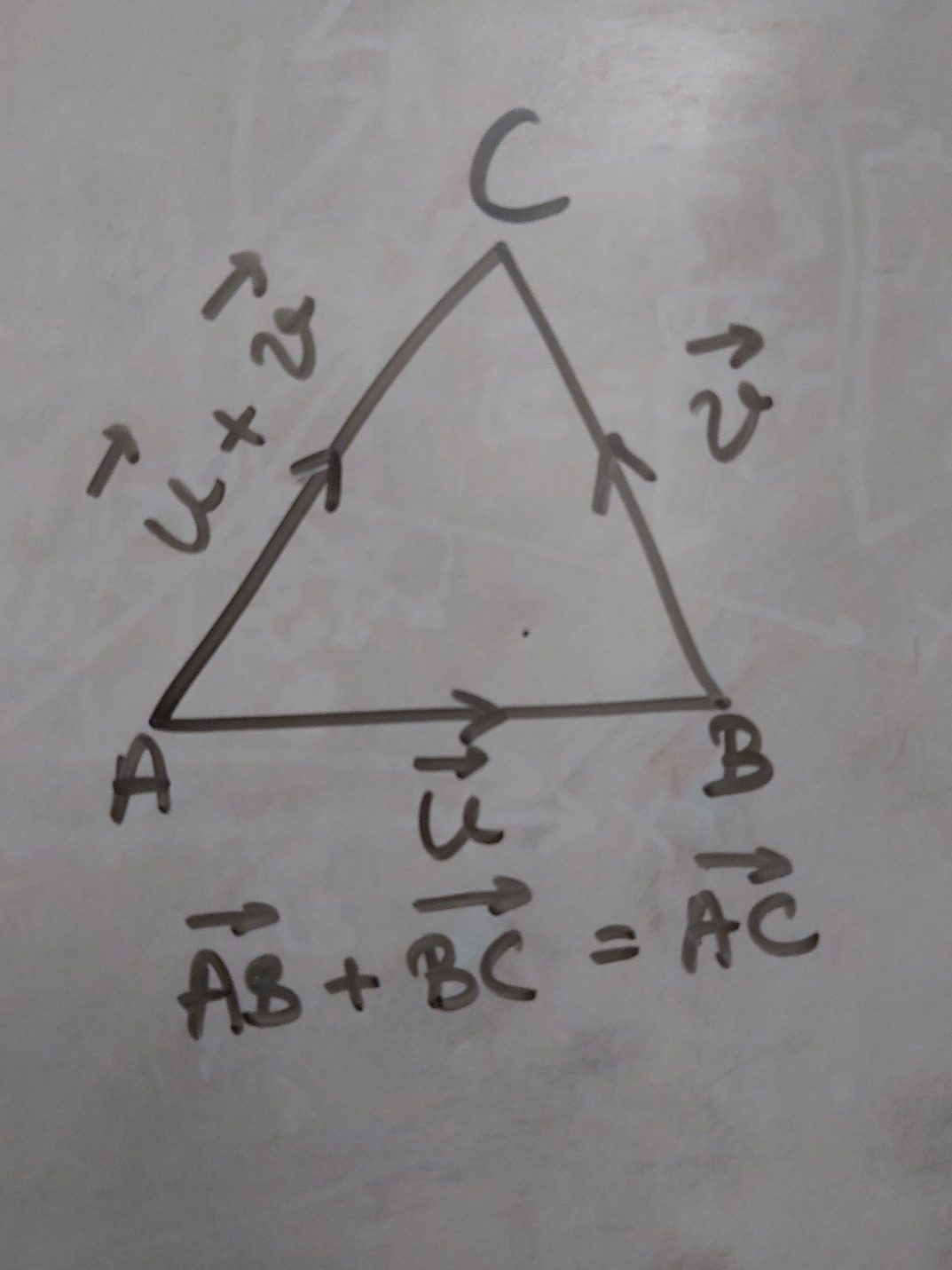 You can see the triangle law of vector addition in the above diagram. You can plot them in two or three dimensions and convince yourself that the x, y (and z, if present) components of the vectors indeed add up this way.

In two and three dimensions, the subtraction of two vectors follows from the way we do addition. 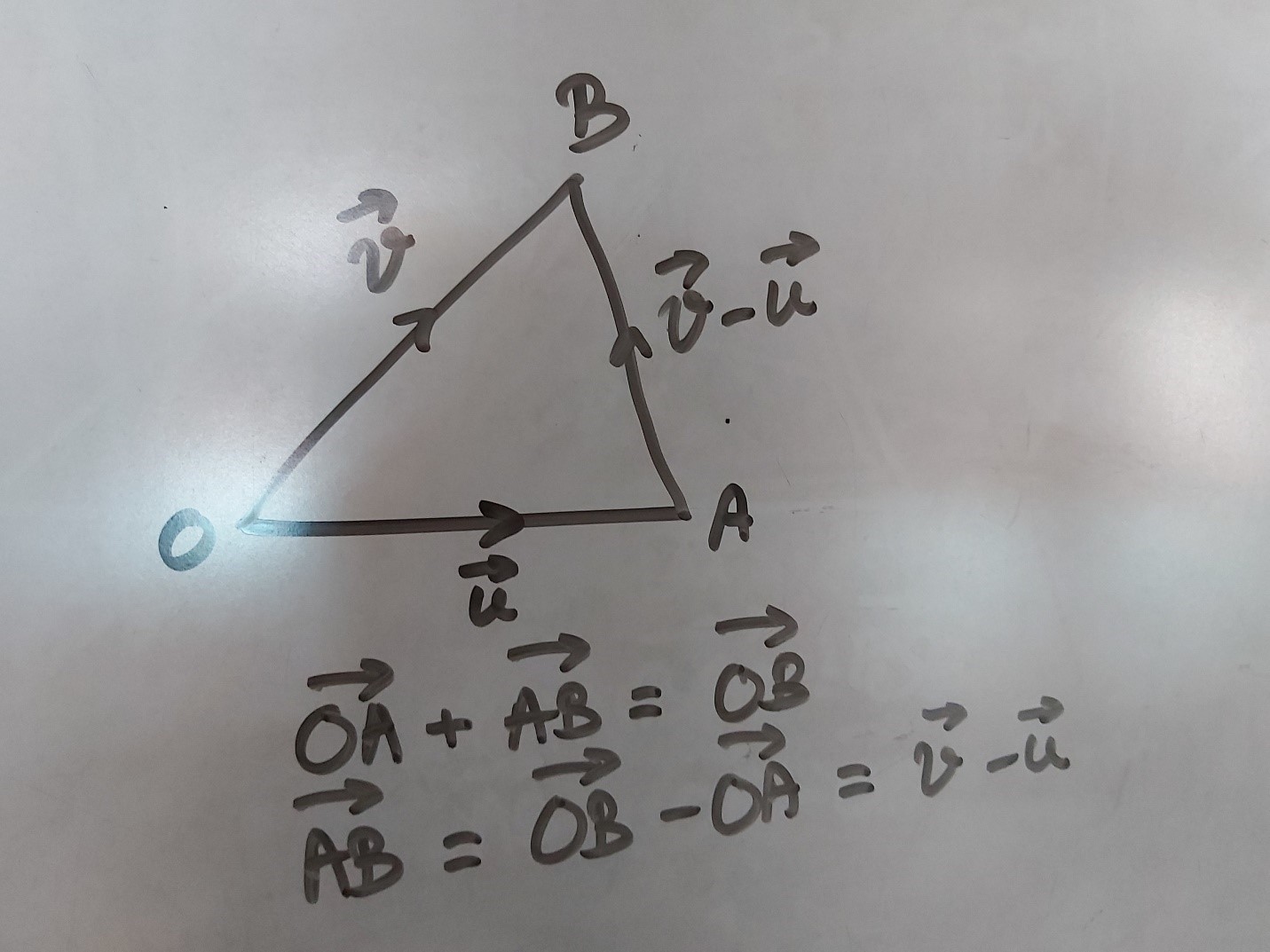 Length of a Vector 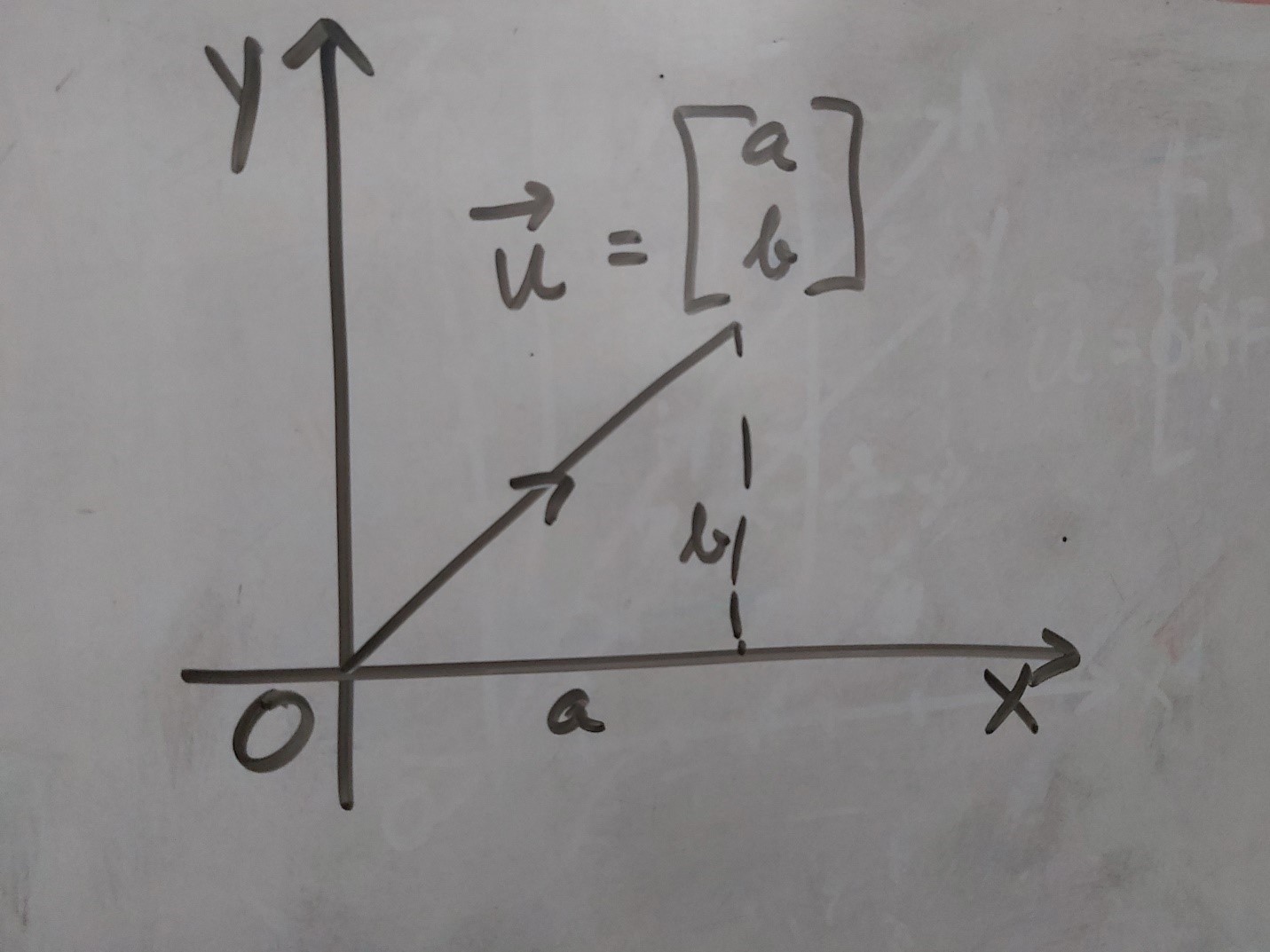 By Pythagoras theorem, length of u, which is denoted by ||u||, will be

What about a three dimensional vector? 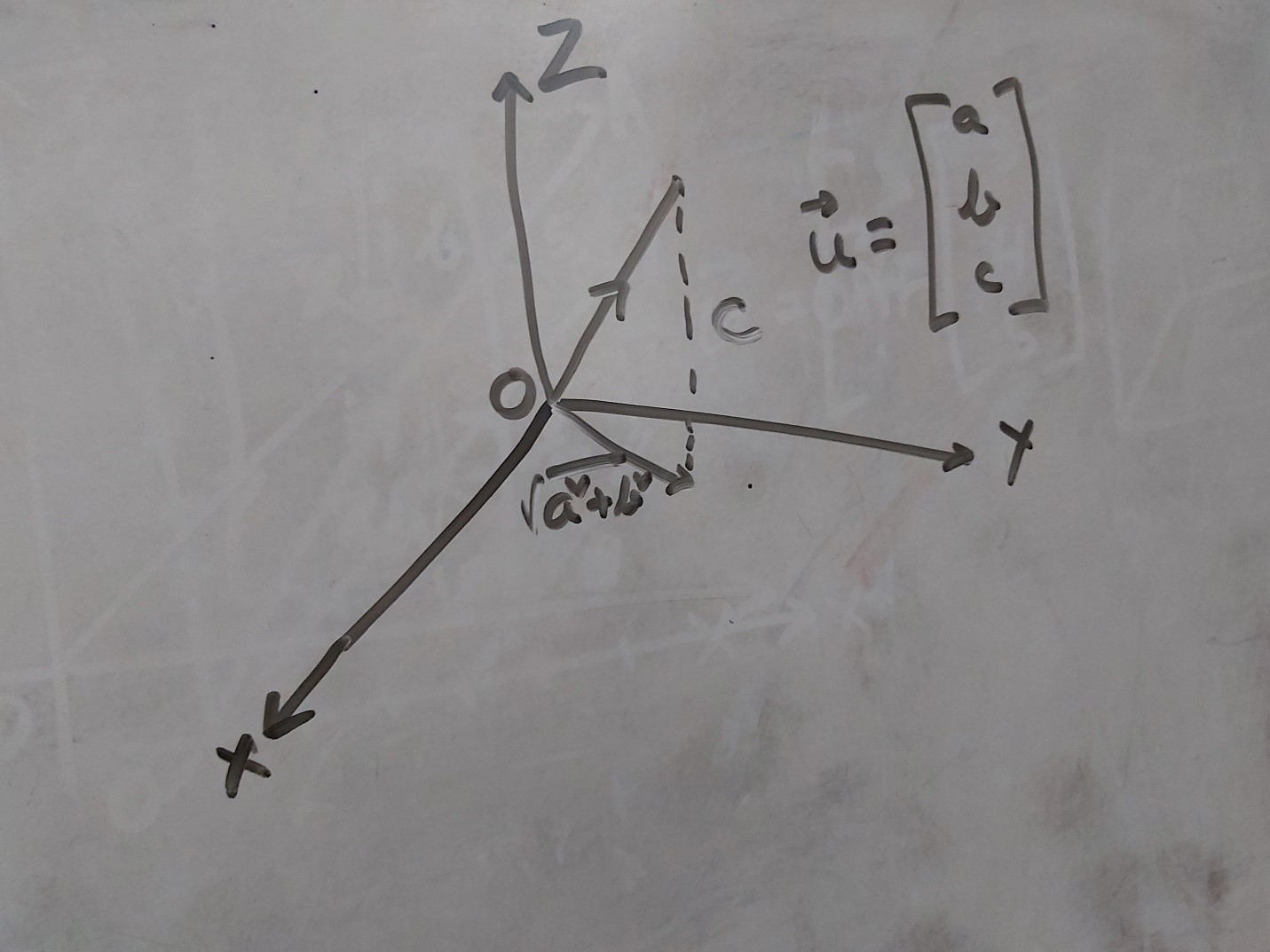 Let us return to the n dimensional vector u.

Cosine of the Angle between Vectors

Let us start with the simple case of two dimensional vectors, which can be represented by arrows. Because they can be represented by arrows, the angle between them can be visualized and we can find out the cosine of that angle by using geometry. We will be using the cosine rule of trigonometry. The Wikipedia article I have linked to in the previous sentence contains the mathematical proof of the rule and the diagram below is also from the same article. 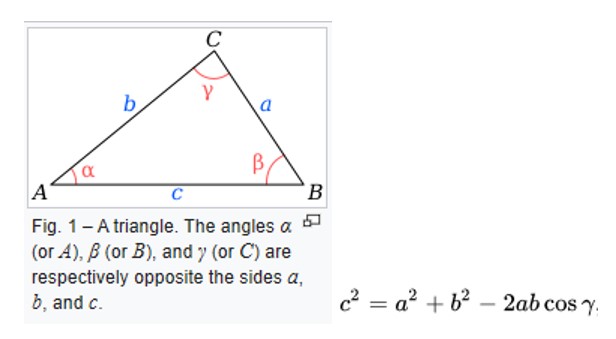 The image below applies the same cosine rule to two dimensional vectors u and v. 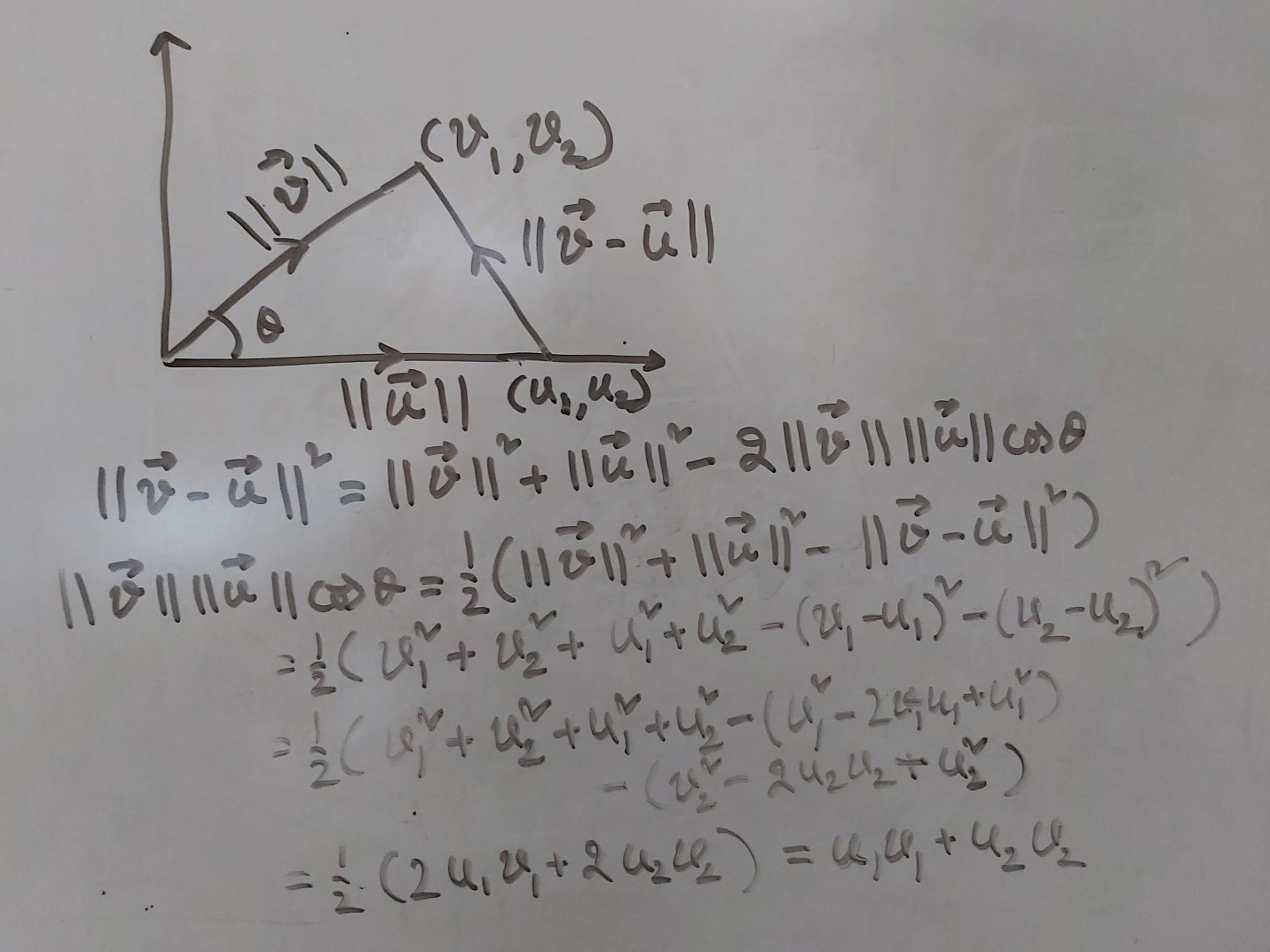 The quantity u1v1 + u2v2 is called the dot product of the two vectors u and v.

So the equation from the diagram becomes,

What if u and v are three dimensional vectors? Cosine rule applied to vector difference in the diagram above will still hold true.

Let us start with that premise. 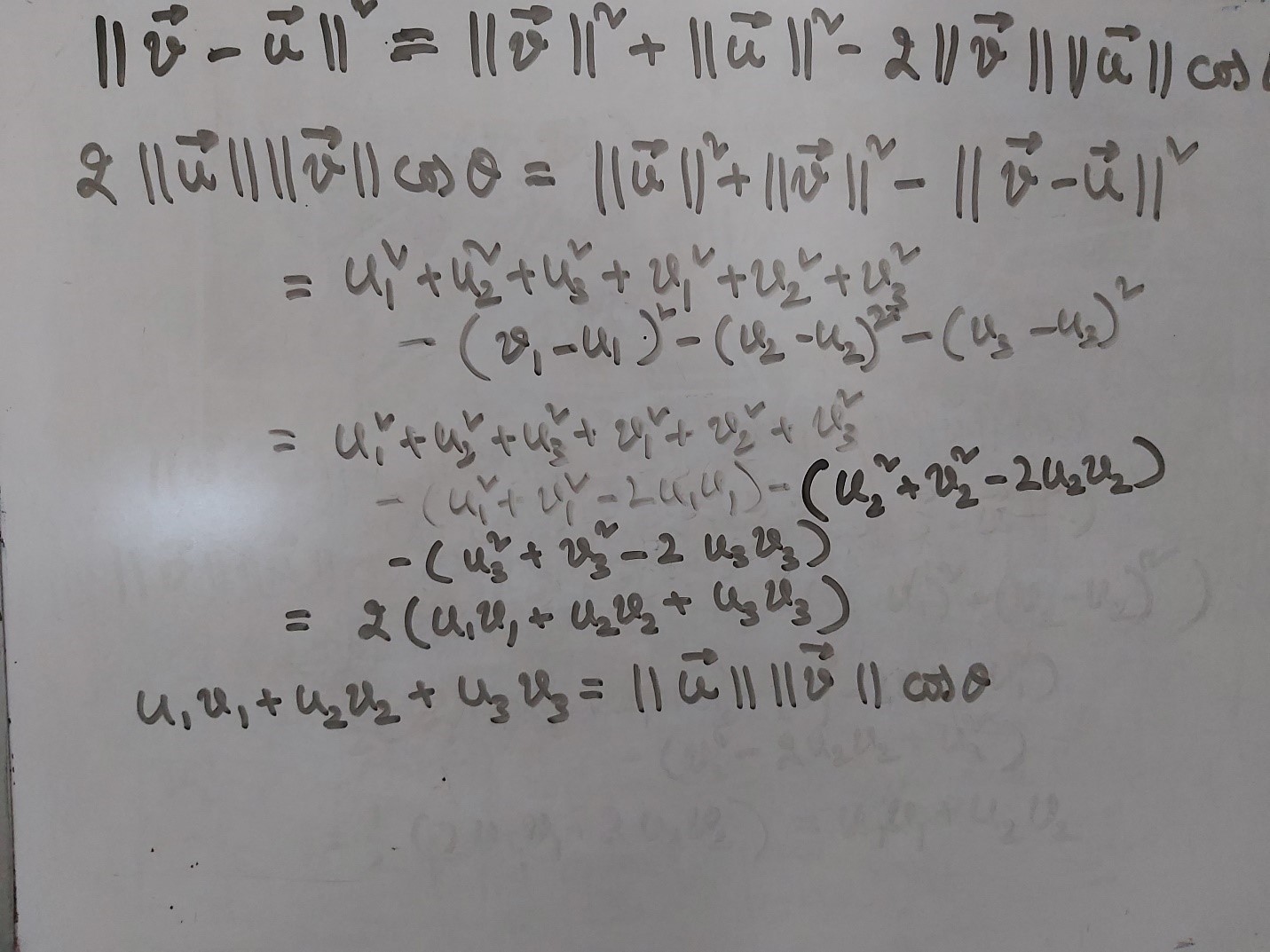 Hence the equation from the diagram becomes

Which is the same as what it was for two dimensions.

So both for two dimensions and for three dimensions,

For the n dimensional vectors u and v, the dot product of the two vectors is defined as,

The definition will be valid, if, as per trigonometry law, the cosine is less than or equal to 1, and greater than or equal to -1. That is actually the case, is proven by Cauchy-Schwarz inequality. The article I have linked to also provides proof of the inequality.

Just to reiterate, if two vectors are parallel (in the example below, the second one is just twice the first one), the cosine similarity is 1 except for the rounding off error.

To summarize, we looked at what are vectors, how to add and subtract vectors, what is the length of a vector, and all of this resulted in understanding how to calculate the angle between two vectors by defining the dot product between two vectors. We cross-checked that the programming results for the cosine similarity match what we calculated using Maths.

Amaresh Patnaik Follow Amaresh is a researcher in the areas of Machine Learning and Natural Language Processing. Additionally he works in the area of learning and development for professionals in the IT services industry. He uses Python and TensorFlow for his research work. In these columns he shares his experiences with the intention of helping the reader understand concepts and solving problems. He is based out of Mumbai, India.
« React Native or Flutter: Which One Should You Pick?
Nine Ways You’re Sabotaging Your Success Without Realizing It »

From the Mastery of Go to Therapeutic Applications: How…