Is “IBM Watson Health Imaging” the Future of Healthcare?

Headlines like these have become commonplace especially in the last three years. Much gets overlooked in the popular conversation, which ends up influencing even experts. This has serious consequences on the ideas that get funded, the products that get launched, and the outcomes we all expect. This article will explore the need and the solutions around AI in medical imaging, trying to dispel hype from reality.

The four core imaging modalities responsible for the vast majority of studies are X-ray, CT, MRI, and ultrasound. The volume of imaging has been increasing steadily, now surpassing a billion studies per year worldwide, half of it in the US. Some of this is obviously great news because it results in patients getting the right treatment when they need it.

But not all drivers of increased imaging volume are positive.  In fact, here are some other reasons for this increase:

The much faster growing demand for imaging is far outstripping the supply of radiologists, which was growing slowly till 2012 and has actually been dropping significantly, almost now back to 1995 levels.

The market imbalance is not getting corrected for a number of reasons, such as 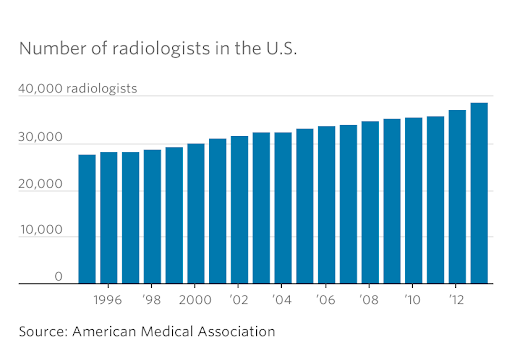 Japan has a very high utilization of imaging, partly because they are also on the leading edge of aging on planet Earth. But when you compare the US to other developed markets, there is indeed a stark difference: case in point a Nature study showing the number of CTs and MRIs per person compared to the EU (“Euro Area” is the subset of the EU that uses a single currency). Hard to say how much of the difference is because of single-payer systems in Europe, or a culture more focused on prevention, or if there is undertesting or overtesting. But the fact is the US is off the chart, compared to most wealthy countries with high quality of life and high life expectancies.

So there is definitely an exploding market for AI in medical imaging — the argument is not even on making medical care better but simply to keep pace with rising imaging volumes and decreasing number of radiologists. Here is where things start to get muddy, because the media at least tends to overemphasize companies that are focused on better diagnosis, conflating retrospective with prospective studies.

If you compare an algorithm’s output with known outcomes that have already happened that’s a retrospective study. It’s just saying based on a certain set of inputs from the past the results match reality. That’s almost always the case when you read a story about so-and-so company built AI that matches / is better than human doctors. What is far more rigorous is an algorithm that can predict what will happen based on data being collected continuously aka a prospective study.

Rad AI automatically creates customized language, streamlining a part of the report that can take as much as a third of the radiologist’s day. Inference Analytics uses natural language processing to understand and translate written notes. Ferrum Health helps health systems correct medical errors, which is especially critical in radiology given its horizontal impact across healthcare (i.e., radiology helps physicians in many different fields make decisions). If you look deeper into these and many other promising companies, they are about building tools to help make radiologists more efficient and effective, not about replacing them.

Below is a snapshot of AI companies from the 2019 edition of the Radiology Society of North America (RSNA). The 54,000-member RSNA holds the largest annual conference of radiologists, which is one of the largest annual medical meetings in the world. 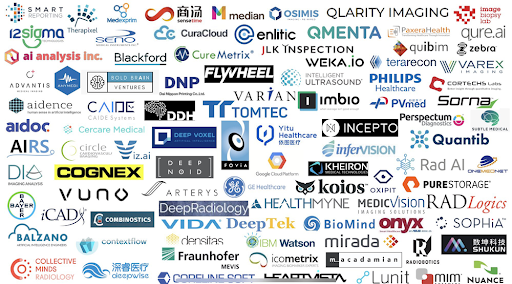 6) Constrained Domains and Human In The Loop

Another headline: How IBM Watson Overpromised and Underdelivered on AI Health Care.

Most experts will tell you that a true AI, which can learn in a similar manner to humans and would typically be termed Artificial General Intelligence, is perpetually 35 years away. What AI is already very good at is taking lots of data and making decisions based on that, but not based on new types of data it hasn’t been trained on. What AI is very good at is doing calculations orders of magnitude faster than humans, but not at exhibiting creativity, synthesis, and imagination akin to that of a human.

The way radiology AI can most effectively progress for the foreseeable future is by ensuring constrained domains — i.e., by focusing on very specific problems. And also by emphasizing humans in the loop: the physician as the ultimate decision-maker, with the computer as an advisor.

Thanks to Harpreet Dhatt, Jeff Chang and Preeti Sukerkar for their feedback, all three are radiologists. Originally published on “Data Driven Investor,” am happy to syndicate on other platforms. I am the Managing Partner and Cofounder of Tau Ventures with 20 years in Silicon Valley across corporations, as a startup founder, and in VC funds. These are purposely short articles focused on practical insights (I call it gl;dr — good length; did read). Many of my writings are at https://www.linkedin.com/in/amgarg/detail/recent-activity/posts and I would be stoked if they get people interested enough in a topic to explore in further depth. If this article had useful insights for you, comment away and/or give a like on the article and on the Tau Ventures’ LinkedIn page, with due thanks for supporting our work. All opinions expressed here are my own.

Amit Garg Follow I have been in Silicon Valley for 20 years -- at Samsung NEXT Ventures, running my own startup (as of May 2019 a series D that has raised $120M and valued at $450M), at Norwest Ventures, and doing product and analytics at Google. My academic training is BS in computer science and MS in biomedical informatics, both from Stanford, and MBA from Harvard. I speak natively 3 languages, live carbon-neutral, am a 70.3 Ironman finisher, and have built a hospital in rural India serving 100,000 people.
« Tech is the Market Top Dog
The Perfect Crypto Trading Strategy »