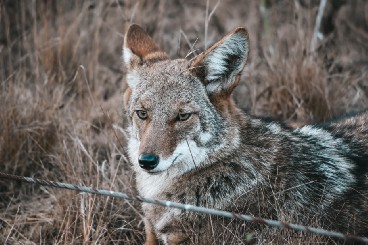 In our attempt to put nature in order, a versatile animal teaches us an essential lesson.

They say coyotes are at my door but I must have been out because I missed them today. Here in our suburban neighborhood, they say coyotes are walking in packs among us. They say they are going to eat our children playing in the backyard and take away our freedom to be outside. They say we must shoot them if they cross our path. They say we should build a Trump-style wall between us and them to protect ourselves.

They have a place to say all these things: it’s called Nextdoor. It’s the “local hub to connect and share with the neighborhood.The place where communities come together to keep a local shopkeeper in business. Where neighbors exchange recommendations for babysitters, plans for local events, and tips about what to order at that new cafe down the street. Welcome to Nextdoor!”

What Nextdoor doesn’t mention in its friendly “connect with our neighborhoods” advertisement, is that’s also the place to rant about the most mundane, self-centered things one can conceive of.

As a behavioral ecologist, the latest bouts of some nextdoorians affected me personally because they went after a local species that I love and respect: the coyote.

My house sits near the top of a quiet Westside residential knoll of Los Angeles, less than ten minutes from the Pacific Ocean. Down the hill, the once pristine wetland marsh rich with endemic species has been slowly chewed away by the Playa Vista enclave. This is an upscale commercial and housing development — with homes that go for over two million dollars — foolishly placed on top of large underground pockets of highly flammable methane gas.

Along the still untouched natural bluff overlooking Playa Vista, with is a view of Los Angeles spanning from the sea to the Hollywood sign, I walk my dog on the dirt trails that leave stretch marks across the slope. As we stroll, the mutt and I sniff blossoming spring flowers, green grass and the sporadic whiffs of methane leaking out of the ground below us.

When I am not studying dolphins and whales at sea, this bluff is the closest nature I can experience on foot. Here, a few steps from an army of Google tech-geeks, a postage stamp-sized patch of wildlife still endures even under pressure from the insatiable appetite of a goliath metropolis that won’t stop growing.

Along the incline, desert cottontails rest under shrub canopies and arboreal gray squirrels collect acorns. There are raccoons, opossums and skunks preying on mice while eagles soar overhead and supercharged hummingbirds sip nectar out of native plants. There are lizards thermoregulating on the sizzling Cali rocks and elusive rattlesnakes resting under wood piles.

Here, a stone’s throw from the teeming 405 freeway, coyotes found a home.

For eons, coyotes roamed the open prairies of the West. Then, as wolf packs and mountain lions receded from the landscape due to human intervention, this versatile canine spread unhindered to most of North America. On their way to conquer new lands, coyotes had to deal with legions of hunters armed with poison, guns and traps. But the misguided war that humans waged against wildlife only helped to wipe out coyotes’ larger and stronger natural competitors making them even more resilient.

Once revered by Native Americans, coyotes became enemies of the people after the arrival of white settlers. But despite the hate, they have outlasted human onslaughts, persecutions and attempts at annihilation. Instead they thrived, spreading like weeds to every corner of the continent.

Coyotes are true American survivors. When they find themselves under pressure from hunters, their packs split up into pairs or single individuals, they generate larger litters and migrate into new territories. And with wilderness becoming a rare commodity due to the human obsession with growth that has destroyed most of these predators’ natural habitat, we now force them to live among us. And they are here to stay.

I walk my dog thinking whether I am going to see one of these unique canines with their thick, grey, rusted-blond fur, their bushy tails and their yellow, sharp eyes. From the top of the hill, I wonder what wild coyotes think of us humans. Through their eyes, Los Angeles has to look very different from what their ancestors, now buried in the La Brea tar pits, experienced a long time ago.

Coyotes, smaller in size and more svelte than their close relative, gray wolves, were here long before L.A. was L.A.; before downtown’s skyscrapers, freeways, strip malls, car-filled parking lots and Playa Vistas. This desert land belongs to them more than it belongs to us, and coyotes have no intention of leaving because this is where the food is.

The hapless Wile E. Coyote, the bad and devious Warner Brothers character is far from what this animal really is, except perhaps for the misfortune of living among us. But coyotes are in many ways like us. They are opportunists, fighters, quick learners and problem solvers. They are complex, clever sentient beings with their own personalities. And as we become more and more of an urban species, coyotes do too.

With an acute sense of smell and speed that can reach 40 miles per hour, these versatile, crafty predators are not picky eaters, feeding on pretty much anything that fits in their mouth, from rodents to insects; even garbage makes it onto their menu list.

It’s not the coyote’s fault if they venture into our backyards searching for fast-food remnants.

We are the problem. Urban sprawl has relentlessly encroached into the wilderness forcing coyotes to swap their “natural” food preferences for a more trash-based diet. It’s no surprise that these four-legged, adaptive city-dwellers are cozying up to children and feasting on free, easy buffets of leftovers, fruit, and occasional small domestic pets.

To elude us, they’ve turned mostly nocturnal, living scrappy, clandestine urban lives, and hiding their dens in the most unexpected corners. But we are doing little to find viable solutions and allow them enough wild habitat to live. We have no idea about the vital role they play in the ecosystem, helping to keep rodent populations on a tight rein. And we don’t realize that these animals are wary of us more than we are of them.

The nextdoorians’ coyote panic seems to have kicked into an even higher gear in the last few days, perhaps fueled by more bad news about the ongoing pandemic. In a recent post, some lady espoused the use of Kevlar suits that protect her pair of Pomeranians from coyotes trespassing her lawn. She swears these outfits are good for cats too.

In the crescendo of anti-coyote hysteria, building a wall on the top of the bluffs and bearing rifles for defense are still popular this week but not as much as the new “Coyotes: Be Aware!” signs that are popping like mushrooms in the manicured front yards near my home. Many neighbors liked this idea in the Nextdoor page a few weeks back, adorning the post with thumbs-up and smiling emojis.

Now the “Coyotes: Be Aware!” signs are everywhere. I’m sure those unlawful coyotes with their keen eyesight will read them and act accordingly…

While I look around for a coyote, my dog pees on one of these signs (likely because other dogs have marked it before him).

They say coyotes are at my door step but I miss them again today. I always miss them.

At times, I hear the howl of a coyote at dusk in one of those rare moments when the city turns down its background volume. I think it’s such a gift to listen to this sound, once the symbol of the American West. I think I am privileged to live near these incredible indigenous, wild animals whose roots go back five million years.

We have a lot to learn from coyotes. In our attempt to put nature in order and far from the neatness of our homes, this versatile overcomer teaches us an essential lesson. It’s a lesson of coexistence. We need to learn respect and compassion and how to live with other beings with which we share this Earth.

Maddalena Bearzi has studied the ecology and conservation of marine mammals for over twenty-five years. She is President and Co-founder of the Ocean Conservation Society, and Co-author of Beautiful Minds: The Parallel Lives of Great Apes and Dolphins (Harvard University Press). She also works as a photo-journalist and blogger for several publications, including the National Geographic. Her latest book is Dolphin Confidential: Confessions of a Field Biologist (University of Chicago Press).

Maddalena Bearzi Maddalena Bearzi has studied the ecology and conservation of marine mammals for over twenty-five years. She is President and Co-founder of the Ocean Conservation Society, and Co-author of Beautiful Minds: The Parallel Lives of Great Apes and Dolphins (Harvard University Press). She also works as a photo-journalist and blogger for several publications, including the National Geographic. Her latest book is Dolphin Confidential: Confessions of a Field Biologist (Chicago University Press).
« Five Financial Applications Of Natural Language Processing
Turn data privacy to your advantage and rebuild consumers’ trust: the next investment frontier »