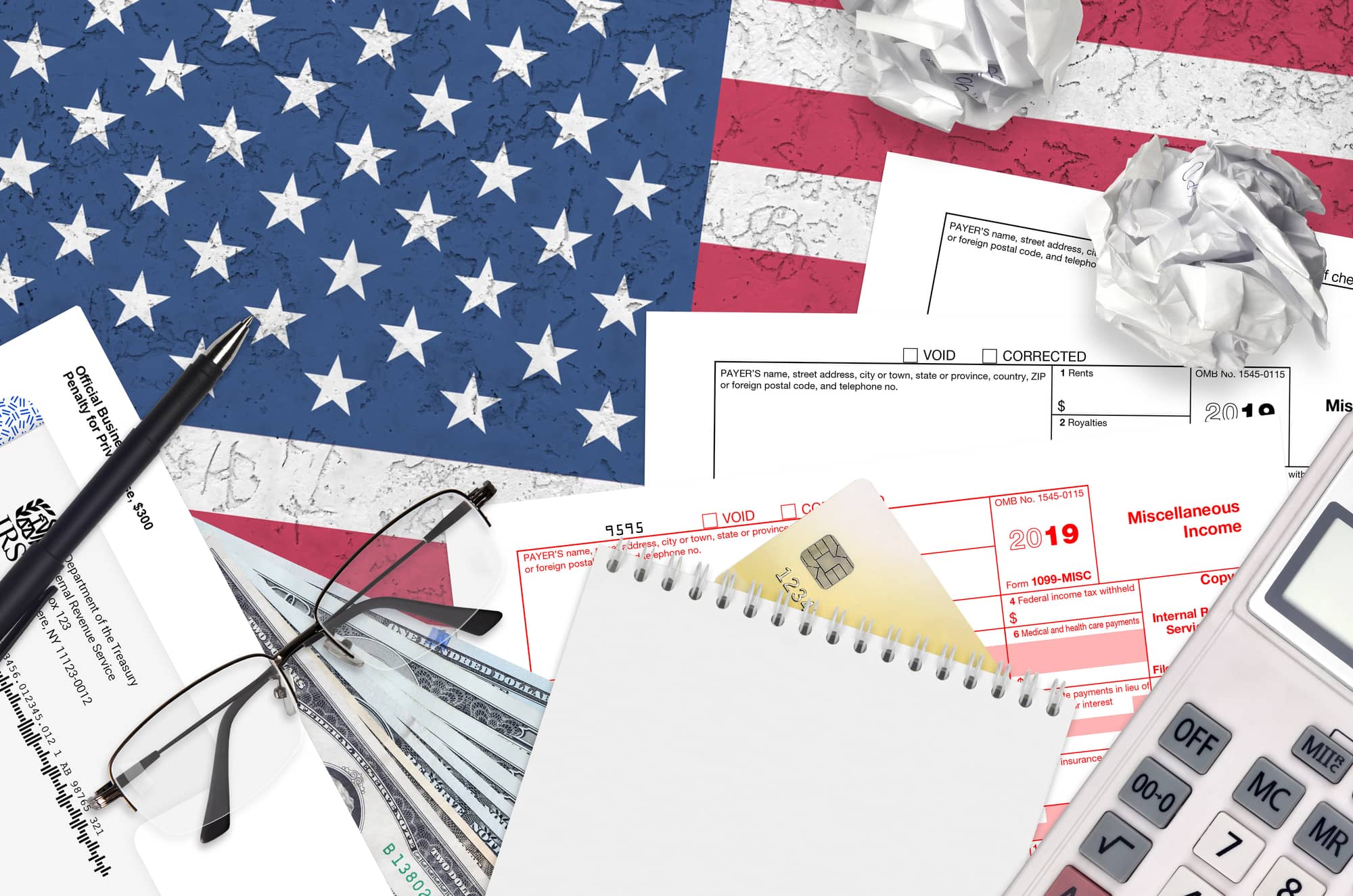 The other day on a Facebook thread, I was trying in vain to make the point with a group of recently retired pilots that we must raise taxes soon. I wrote that it has become necessary due to our national debt level, which is now nearly $27 trillion, and will be even higher by the end of 2020. By the laws of economics, that could quite possibly and most probably drive us into a hyperinflationary period. I also explained to them that as retirees, they should care more about inflation than tax rates. Presumably, they won’t be making over $400,000 a year in retirement.

One guy chimed in that my position, a necessary tax increase, was ridiculous and everyone knew that decreasing taxes would increase tax revenue. “Hadn’t I ever heard about the Laffer Curve?”

I didn’t want to bother with my bonafides, so I ignored him. They were frantically trying to convince me that taxes should not be raised. I could almost feel their desperation coming through the key strokes on their {smart}phones. 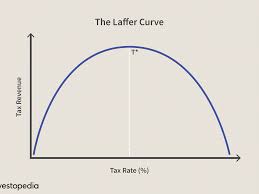 Of course, the Laffer Curve was always just a theory, one I studied while doing my graduate degree in economics at Georgetown University many moons ago. At the time, it had been formulated by the economist, Arthur Laffer, and the monetarists seized it as an excuse in justifying tax cuts for the wealthy.

In a nutshell, the Laffer Curve posits that cutting taxes will give people more money and they will spend that money, invest in their businesses, and so on, and the resulting increase in money made will increase tax revenues overall. This has also been called “trickledown economics.”  The curve is bell shaped and the theory is that increasing taxes will increase tax revenues up to a certain point, because those increased taxes go to the federal government. Eventually tax revenues will start to go down if taxes continue to increase because people and businesses will slow down or stop investing money because they don’t have it – the federal government does.

Like many theories in economics, it is dependent on countless fluctuating variables that make calculating it akin to shooting those tin ducks floating by at a carnival shooting game. Alas economics is often more of an art than a science. But it got me to thinking, what’s going on with the tax revenue for the last decade since we’ve had a couple tax reductions and an increase under two and a half Presidents.

This is a quick and dirty analysis with basic assumptions. I started with a time period from 2000 – 2019. In this decade, there was minimal inflation to contend with and adjust for; you have to compare apples to apples.

I set about devising some standards. I looked at the top tax bracket because this was the group of the highest earners that would be most likely to benefit while also ostensibly spending the most money. I also assumed a head of household rate. This took some time because I had to go through year by year. I used a site, moneychimp.com because it has a simple search function by year and filing status. I did cross check it with a federal site.

Tax revenues I found on thebalance.com. The revenues are made up of personal income tax (about half), plus corporate taxes, payroll taxes, inheritance taxes and other minor taxes. In short, all tax revenue.

What was the result? 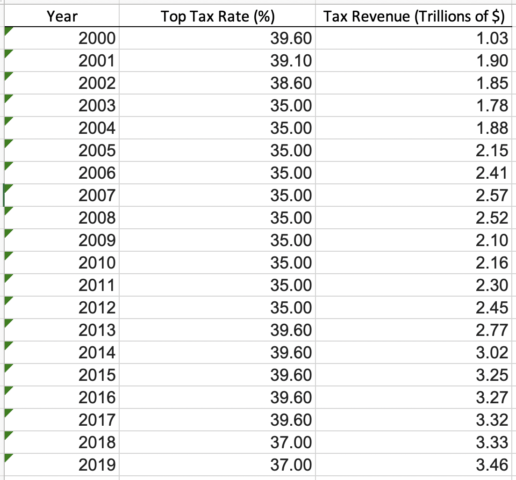 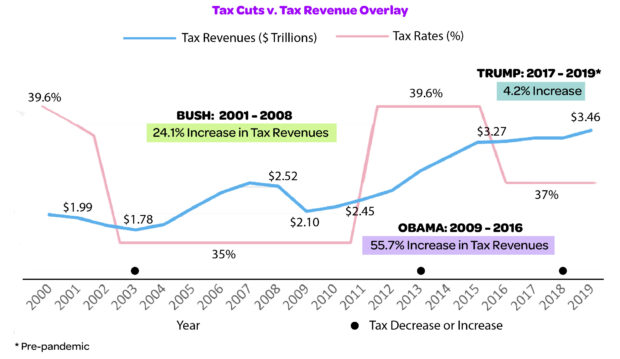 The United States began the last decade with George W. Bush elected as President. He cut taxes in 2003 from 39.6% to 35%. Revenues did go up a fair amount, but then came down in 2009 when the Great Recession hit. The increase in tax revenues attributed to his time in office was 24.1%. As a country, we had also borrowed quite a bit of money at that time to pay for the wars in Iraq and Afghanistan resulting in a huge deficit and of course, with the recession, spending decreased and therefore, tax revenues decreased as well in Bush’s last year in office.

Obama came into office during this recession and was able to increase taxes for the highest earners back to the pre-Bush era of 39.6% in his first two years with a Democratic majority in Congress. Did this decrease tax revenues? Quite the contrary. Tax revenues went up 55.7% while Obama was in office and the tax rate for the highest, head of household bracket was 39.6%.

Trump was elected in 2016 and he promptly decreased taxes for this bracket to 37%. He also cut corporate taxes, inheritance taxes and capital gains tax not reflected here. To be sure, tax revenues continued to increase his first two years in office, however, at a very meager 4.2%. My hypothesis is that the tax cut reduced tax revenue while the people and companies that received it did not spend or reinvest.

I also calculated a correlation coefficient (manually using Excel – not fun), and it turned out to be .29. A perfect positive correlation is 1, perfect negative is -1. So, a .29 is quite weak. In other words, there is very little correlation between tax cuts and tax revenues overall. And here’s the funny thing. It is positive which means there is a stronger correlation that increasing taxes will actually increase tax revenue. (The successful Obama years.)

Disclaimer: for a more thorough analysis I would look at all the tax brackets and adjusting for inflation go back thirty years or more. But I doubt that the result would be much different based on my assumptions that I gave above.

In conclusion, the Laffer Curve has not proved out for this decade. In fact, the growing economy had more to do with increases in tax revenues. It would help our economy more to increases taxes in that upper bracket and personal taxes, corporations and capital gains, try to build an annual surplus, pay off some of our national debt, implement some fiscal policy stimulus, and hope that it is enough to forestall inflation.

As for my pilot friends? They’re smart guys. At flying planes. Not so smart in economics. Something does not become true because you’ve heard it or think it or say it. Do the number crunching yourself. And here’s some advice: support raising taxes in the top tax bracket, because if we have hyperinflation, you’re going to be paying twenty bucks for a loaf of bread. On a fixed income.

Cynthia Wylie is a hard-driving entrepreneur with a successful track record. She was raised on a farm which taught her the habit of hard work from an early age. Her recent startup, Bloomers Island has become the standard bearer brand for children to live healthier lives and make healthier food choices as well as inspire in them a love of gardening and nature. She has received two patents on her seed starters, SeedPops which have been sold in over 5,000 stores in North America including Target, Nordstrom and Costco Canada. The first five books of her nine-book series have been published with Rodale Kids, an imprint of Penguin Random House. Previous companies where she was a partner/co-founder include X-Large Clothing, the seminal streetwear brand, and Maui Toys, the activity toy company recently sold to Jakks Pacific. In addition to starting and selling companies, Ms. Wylie does business consulting with The Project Consultant. She focuses on raising money, turnaround actions, and strategic and tactical planning in operations for small manufacturers. She is a founding member of the Startup Founds Group in Silicon Beach, a group designed to process issues and problems that all startups inevitably face. She started her career in Investment Banking writing private placement memorandums and developed an expertise in helping companies to raise money, including over $1 million in seed capital for her latest company. Her B.S. degree is in agriculture from Pennsylvania State University and she has an M.A. in economics from Georgetown University in Washington D.C. She is the part-owner of her family farm in Western Pennsylvania. She raised four children and loves writing, reading, learning foreign languages, and growing plants and companies.
« Blockchain Will Transform the Way Banking Apps Work
Collapsing the Superposition: The Mathematics of Quantum Computing »