How Not To Be Dumb Money 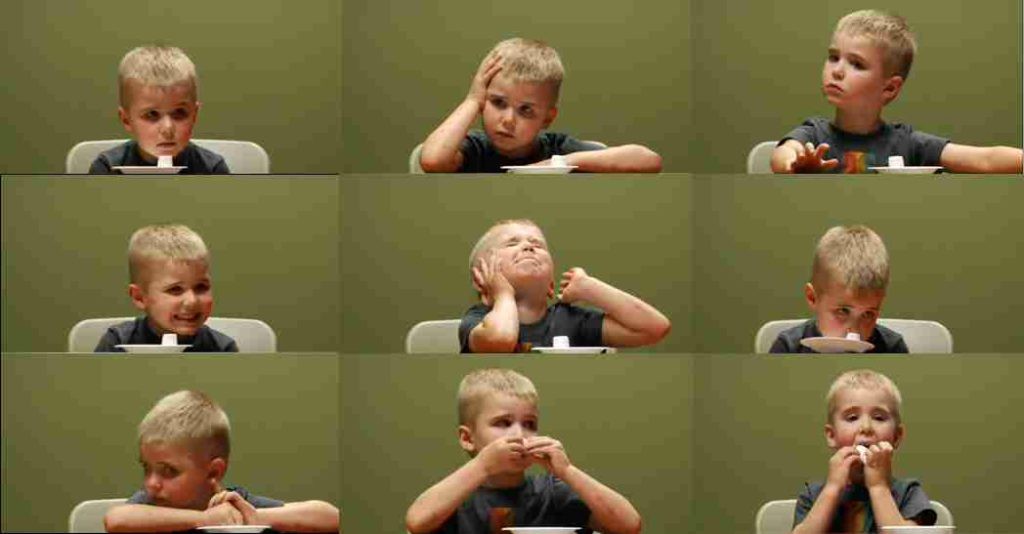 At first glance any Buffett-ism seems irrelevant to the bubblicious world of r/WallStreetBets and its short-termist meme-ified Gamestop trade. What does Gamestop have to do with value investing? Well, if you’re patient, a faculty in terribly short supply in Gamestop World, you may find free Alpha in out of the money Gamestop put options lying around waiting to be picked up. Consider this options trade as the adult version of the children’s cookie experiment: are you patient enough to wait months or even a year for your profit cookie? Or are you….This kid couldn’t wait twenty minutes, so he gets only one cookie instead of two. (Here’s one of many cookie or marshmallow test videos: https://www.youtube.com/watch?v=j9UfY_94sKU)

The tastiest and least risky cookies in meme-stock world are the long-dated and lowest strike price puts that make you wait far beyond the attention span of the male-bonded bros of r/WSB and the hedgie sharks feeding on the squeezed shorts by momentum trading the stock and hedging with puts.

Every gold rush produces miner-driven demand for shovels and blue jeans. So where in the options chain of a meme-ified bubblicious stock has demand driven the price of shovels and blue jeans to ridiculous levels? How can a patient shovel and jean seller exploit this briefly open window of opportunity with a low risk high probability of success?

The answer: find a short-squeezed hedge fund hotel on fire and surrounded by a Reddit WallStreetBets crowd yelling burn baby burn!…..and sell kerosene to the crowd.

As the crowd and the squeezed shorts clog the entrances and exits, the market prices of far below the money put options will go haywire.

The options chain of any stock is a mechanism for pricing fear and greed — calls for greed, puts for fear. As the stock rises so should the price of greed, represented by call options. Everybody watching the Gamestop Bubble 2.0 unfold now knows how market makers hedge the calls they sell by buying the underlying stock, thereby setting up an option to underlying feedback loop that stokes the short squeeze bubble.

Narratives are often short-lived and temporary. But they clearly disrupt how fear and greed in the stock’s options chain are priced. In my previous article about Gamestop we saw how the stock’s out of the money (OTM) puts’ implied volatility and prices rocketed skyward as the stock did. When the stock cratered, so did the OTM puts’ with single or low double digit (5.50, 7, 10, 12, 13) strike prices implied volatility and prices, allowing put sellers to buy back sold puts for 50–80% less they’d sold them for only a few days or weeks before. Example: $10 strike Nov 2021 puts sold for $2.74 sold in late January when GME was above $300 bought back for $1.17 on February 25.

But it’s essential to verify that this strategy is a repeatable process and not just stored risk. We’ll look at the narrative, the stock’s valuation and the put options’ theta, or time decay, to see if we can safely rinse and repeat.

In the first Gamestop bubble the usual volatility smile pictured below inverted. Then, as the bubble unwound, the puts’ implied volatility cratered along with the stock. Normally the implied volatility of options rises the farther out the option’s expiration date.

During the ramp up of both GME bubbles the OTM puts behaved like ITM (in the money) puts, rising with the stock price. The GME r/WSB meme-ification bubble inverted the usual relationship; the volatility smile folded over on itself. Shorter dated put options — fear — were priced much higher — double or more than before. The options market was telling traders that there was a high probability of implied, projected or forecast, volatility dropping back down toward realized volatility after the bubble burst. So the window of opportunity to sell the puts at sky-high implied volatility of 400–800% would be open only briefly. This is exactly what happened as GME cratered from $483 to $40–45. The imp vol of long-dated OTM puts dropped to 130–200%. The volatility smile remained inverted, but with the right half folding over itself leftward instead of left over right as the stock had risen.

Now that we’ve established the relationship between the puts and the underlying stock as the crowd’s meme-ification works its magic, let’s look for the highest probability success bet. Ask at what price you’d be willing to own GME? What’s its worth more dead than alive valuation? This won’t produce a precise number, but a reasonable range. At what market cap is GME a bargain? Has this market cap changed as a result of the GME brand rising in value due to all the publicity swirling around its stock? Ryan Cohen’s tweet and the e-Sports acquisition rumor is telling you something here:

Sell the Most Overpriced Fear and Certainty

90% of options expire worthless. You want your sold puts to be among them. Overpaying for certainty while ignoring probabilty is one of the strongest and most durable of human cognitive biases that drives options buyers. (check the list: https://en.wikipedia.org/wiki/List_of_cognitive_biases)

The lower the strike price, the less the premium you’ll get for selling puts. So to collect significant premium money from Redditors, hedgies and other momentum traders expensively hedging their long momentum trades, sell long-dated put options. Find a strike price sufficiently under fair value at which you won’t mind owning GME. Consider pre-meme-ification, pre-bubble consensus:

“It’s been a sad week for GameStop Corp. (NYSE:GME), who’ve watched their investment drop 18% to US$13.66 in the week since the company reported its third-quarter result. Results look to have been somewhat negative — revenue fell 7.7% short of analyst estimates at US$1.0b, although statutory losses were somewhat better.”

If your put were to be exercised at a $5 strike price, you’d own GME at .988 of book value. At a $4 strike price, at 21% under book value. Keep in mind that book value for a brick and mortar retailer in a legacy business in need of “digital transformation” is a moving target. Remember JC Penney and its book value? But by selling puts instead of owning the stock, you care more about the market’s short and intermediate term narrative about the turnaround story. Ryan Cohen’s ice cream Cohen tweet is as important for now as the reality of GME’s turnaround. Cohen will likely follow the meme-ification playbook Elon Musk used with Tesla unconsummated going private at $420 tweet (that led to a $20m SEC fine) and its Bitcoin position.

Bed, Bath and Beyond (BBBY), a similarly crippled and briefly meme-ified legacy brick and mortar retailer, sells at 2.25 times book value and about 1/3 more than fair value as measured by Simply Wall Street. At 2.25 times book value, GME would sell for $11.38. Sell an October 2021 put with a strike price of $15 for a premium of $3.50 and you’re right at reasonably fair value if exercised.

Here’s a sample of sold puts. The higher the strike price, the higher the probability of the seller seeing the position exercised (seeing the stock put into his account).

It’s clear there’s a tradeoff between probability of exercise and premium amount. It’s also clear that a seller of January 2023 puts at strike prices far below GME’s book value and Ryan Cohen’s likely insider buy price of $13.80 can trade time for premium size while being subject to no greater probability of exercise at what’s, in any case, a knock-down price. Wait 14 months and collect $1.60 for five $2.00 puts, which requires the same cash coverage as a single $10 put bought back at the same time as the $2.00 was sold. Willing to own GME at a net cost of $5.17 ($7 — $1.83 put sale price)? The cash required to support three $7 puts is about the same as that required to support two $10 puts. Go out an additional year and you take better advantage of the out of the money puts’ theta, or time decay. Here’s a simplified visualization of the math involved:

Meme-ified Redditor stocks with 150–400% implied volatility options will have a much steeper time decay than what’s shown in this graphic. Theta usually accelerates as options approach the expiration date. But triple digit volatility brings time decay forward by steepening the theta curve. The steeper theta slope is your friend if you’re selling puts.

Buffett’s mentor, Benjamin Graham, wrote that in the short term the market is a voting machine, but in the long term it’s a weighing machine. As the Ryan Cohen turnaround narrative plays out and the market finds out how successful — or not — Cohen & GME are at digital transformation, the weighing machine will gradually supersede the voting machine. That process of clarification will crush the implied volatility of GME’s put options — and their prices. Even with a muddled, incomplete narrative the implied volatility, and therefore the price, of puts sold far below the money will drop dramatically. This is how selling cash-supported puts can be a value investment as the sellers play the role of the patient recipients of the impatient speculators’ money.

The media, and the Redditors, have portrayed the meme-ification of Gamestop as a kind of crusade against big money rigging the market. In this narrative Robinhood is the villain that betrayed its retail traders by switching sides — closing down GME trading as the bubble peaked. If the war between the short-squeezed hedgies and r/WSB is a crusade, you want to do what the Venetians did for centuries in the real crusades: sell weapons to both sides.

I\'m a NYer living in Latvia since 2005, after living in Italy from 1989-2005, Spain and Catalonia in 1976, 1980-81 and 1986-87, southern France the summers of 1985 & 1986 and Portugal in the Carnation Revolution summer of 1974. Conversational Russian and Latvian are my 6th and 7th languages. I did channel check research for one hedge fund and a Wall St research firm from 2009-12 and taught Behavioral Investing, Entrepreneurship and History at Riga Business School from 2012-16. Title of my investments course: The History of Human Financial Stupidity--Including Mine. From 1998-2007 I invested in real estate in Latvia and Estonia. Since 2015 I\'ve invested 7 early stage startups, none of which have yet failed, but some of which inevitably will. Best trade: shorting 20m JPY with spot and options trades on FXY in early 2013 Worst trade: long yield-trap MLPs in 2015 My wrestling match with The Great Humiliator: ongoing.
« Dividend Growth in North America
Macro Things Have Nano Beginnings »

How much do you need to invest to live…