Dara Tarkowski Follow I'm Dara Tarkowski. Innovator, entrepreneur, attorney and podcast host. I am FinTech and RegTech enthusiast passionate about responsible innovation and exploring the intersection of law, technology and highly regulated industry. I'm the Managing Partner at Actuate Law, Chief Innovation Strategist at quointec, and the Host of the Tech on Reg podcast, recently named one of the top 10 RegTech podcasts. I was also named to the 2019 Women in FinTech powerlist by Innovate Finance.

Patent Trolls: From Under the Bridge to a Courtroom Near You 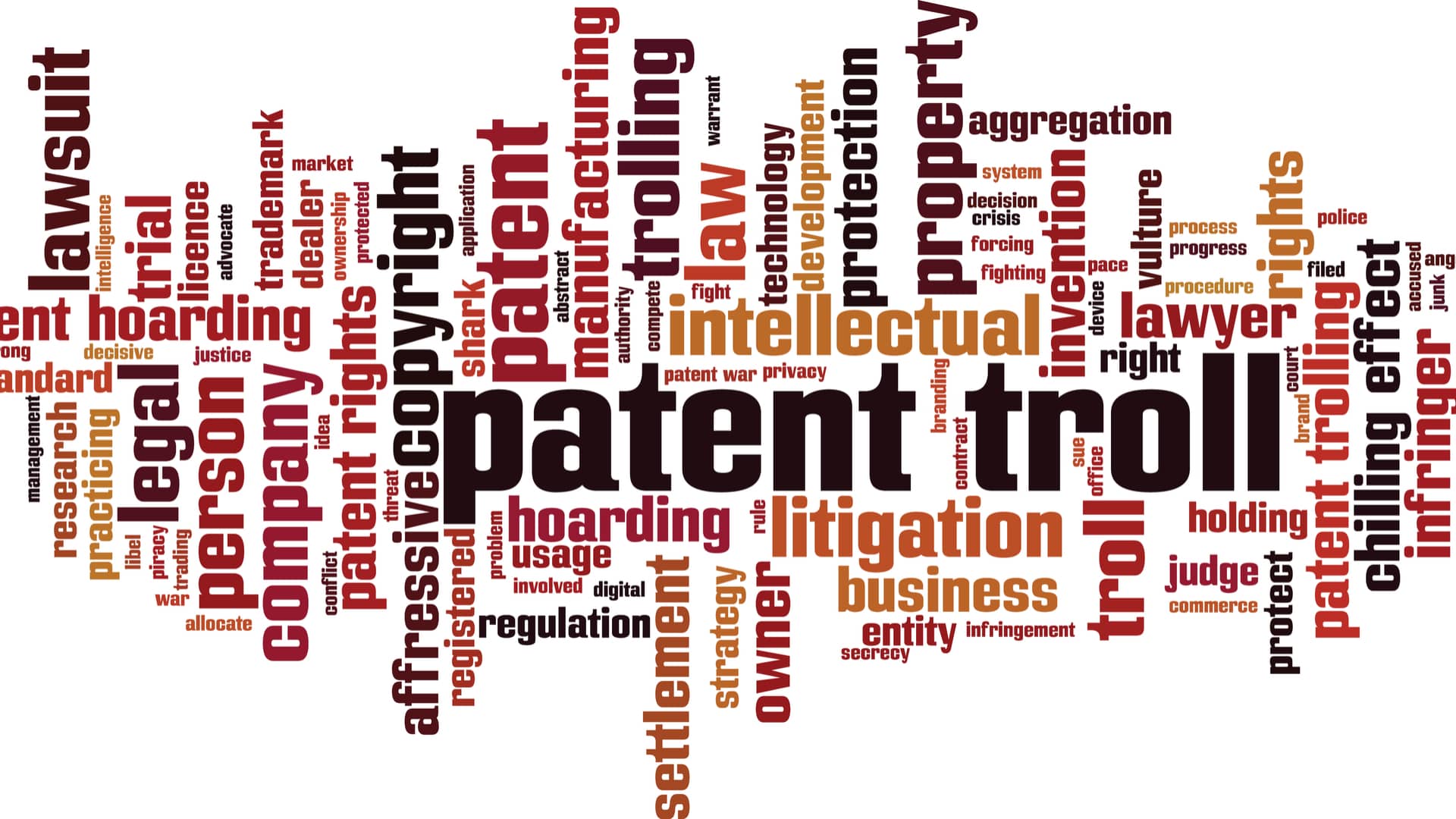 Michael Switzer, partner and chair of the intellectual property practice at Actuate Law, discusses patent “trolls” and their effect on the fintech industry.

Trolls: They’re not just fuzzy toys with wild hair, characters in folklore or belligerent commenters on Twitter. They’ve got briefcases, well-cut suits and a taste for intellectual property.

“Patent trolls” file 84% of high-tech patent lawsuits every year. Over the past decade, patent troll lawsuits have increased by a whopping 500%. Research from the Boston University School of Law found patent troll litigation results in $80 billion in lost wealth annually.

To break down what patent trolls mean to the financial services industry, I spoke with Michael Switzer on an episode of Tech on Reg.

Mike currently serves as partner and chair of the intellectual property practice at Actuate Law. A 25-year veteran of the specialty, he has also chaired IP practice at another Am Law 100 firm, worked in the U.S. Patent and Trademark Office as an examiner, and served as in-house counsel for Hitachi Limited.

“Patent troll is a pejorative term to describe an entity that utilizes patents separate and apart from the underlying manufacturers,” says Mike. “They have no intention of ever manufacturing a product, launching it, getting on QVC, anything like that. Their business model, plain and simple, is to monetize the patents through licensing or litigation.”

Trolls don’t make any products or provide any services. They don’t do anything except acquire the rights to patents and make a buck off enforcing those rights.

But the plaintiff’s bar doesn’t like to use the word “because juries usually don’t associate trolls with something positive you would want to hand a lot of money to. They would prefer we refer to them as non-practicing entities (NPEs) or patent assertion entities (PAEs).”

Patents are enshrined in the Constitution

So how did this charming cottage industry begin?

In the U.S., patents are provided for under the Constitution. Article 1, Section 8 says:

“The Congress shall have power to promote the progress of science and useful arts by securing for limited times to authors and inventors the exclusive right to their respective writings and discoveries.”

“We as a society want people, when they invent something new, something useful, to disclose [blueprints and other art] so everyone else knows how to make and use that advancement,” Mike explains.

That way, instead of working in parallel and re-inventing the wheel individually, we can improve upon the wheel and keep moving forward.

To incentivize people to share their technology and let the rest of us learn from it, a limited monopoly is granted.

This makes sense, if patents are meant to empower innovation and promote the creation of things that make our society better. But at some point, the purpose of the patent clause changed. When did that happen?

Patents evolved from ‘shield’ to ‘sword’

Traditionally patents were used as a business tool to protect market share. Mike describes this use as a “shield.”

But in the late ‘80s, many entities started asserting their patents are earning significant revenue from them.

One example is Texas Instruments. Faced with declining revenue, the electronics company embarked on a licensing and litigation campaign. Over the three years between 1987 and 1990, it reportedly added more than $500 million to its coffers through patent trolling.

“All of a sudden, there was a lot of interest in the significant amount of revenue that can be generated from patents,” says Mike.

So that shield became a sword.

Trolling as a business model

Today, there are individuals and large investment funds whose business model is centered on acquiring patents as assets.

Sometimes traditional operating entities –– large companies like IBM or Google –– have patents they’re not using and want to monetize, so they sell them. Or an inventor who created a patent sells it off. As a result, plenty of people on both sides make money from patents.

So why should we care?

Mike says the financial services industry is in a remarkable position at the moment.

Fifty years ago, financial services meant moving paper money around, but it’s not that way anymore (and not just because paper is literally covered in germs).

“As a result, there are all kinds of patents and a lot of deep-pockets” for patent trolls to target, he notes.

The payment space is no exception in this target-rich environment.

The most recent example is an entity called Caselas LLC, which has filed 20-plus lawsuits in Texas, primarily the state’s Western District –– a current “hotbed” for patent litigation, says Mike.

“Basically, five patents are being asserted that are directed towards computer-implemented means of keeping and sending banking and transaction records. We’ve been keeping a close eye on the case, which just started. So it’ll be interesting to see how those are approached and defended against.”

So put a pin in that.

Big companies have sophisticated legal departments that understand the game. No company can afford to be a constant ATM for patent trolls, but these companies are better equipped to handle these sorts of claims than smaller businesses, entrepreneurs and companies in the midst of raising capital.

Even one of these suits could be devastating for a startup or a growing company.

That’s what trolls use to their advantage: Patent litigation is expensive.

The cost of even a small patent case carried through to trial could be in excess of $3 million. Just performing some legal basics, like a cursory investigation, filing an answer and initial proceedings, could run $50,000 to $100,000.

Because of the expense, some suits brought by NPEs rely on what Mike calls “nuisance value.” The patent holders who are sued can either spend upwards of $50,000 for a bit of legal work or hand over $10,000 to get the NPE off their back.

On the other end of the spectrum are what he calls “bet-the-company” cases.

“Apple has been tagged for hundreds of millions of dollars by various NPEs,” Mike says.

You can’t force a plaintiff to settle if they’re determined to take a case the distance, although, inevitably, everyone has their price. There’s always a risk-versus-reward analysis at play. You never know what a jury is going to do, especially when the defense counsel calls the plaintiffs “trolls.”

How to fight a troll: It starts with prevention

What if you’re an entrepreneur in fintech or regtech and find yourself the target of one of these trolls? (I’m just going to continue to use the word troll. Sorry, plaintiff’s bar.)

“The reality is, if you have any liquidity or any asset value, you’re already a target,” Mike says. “So you want to start with good hygiene.”

It’s also crucial to scrutinize your contracting process with vendors to make sure you get the best terms regarding indemnifications, warranties and representations.

That gives you legal recourse in case you’re sued for a patent infringement that’s the result of Motorola equipment or a Microsoft application, for example.

Mike also recommends checking your insurance. Your policy may have the option of an IP rider, which could be a lifesaver for a small business or entrepreneur in the event of patent-troll aggression.

It takes a village to fight a troll

If you find yourself preparing for battle with a patent troll, you need a supportive, experienced litigator who can do a fair degree of lay translation for judges not versed in the language of technology.

It’s likely your attorney (or theirs) will try to relocate the case if the venue isn’t advantageous. The Western District of Texas has a reputation for speed and juries that are friendly to plaintiffs. Other jurisdictions may be friendly to “hometown” companies (e.g. a Chicago firm defending itself against patent litigation usually benefits from the case being tried in the Northern District of Illinois).

There are ways for the industry to collectively fight back, too.

Traditionally, community interest groups and joint defense groups have pooled resources to fight a single trolling entity. But recently, there have been efforts to use the trolls’ business models against them before litigation even happens.

Another group, RPX, gets industry members to pool money to buy patents –– the idea being that the industry should buy it, get a license to it and put it aside, as opposed to worrying about an investor or NPE obtaining it and asserting it.

In the case of patent trolls, perhaps the best defense is a good offense.

Meanwhile, we’ll be monitoring the dockets and providing updates on our troll friends. Watch this space.

Dara Tarkowski Follow I'm Dara Tarkowski. Innovator, entrepreneur, attorney and podcast host. I am FinTech and RegTech enthusiast passionate about responsible innovation and exploring the intersection of law, technology and highly regulated industry. I'm the Managing Partner at Actuate Law, Chief Innovation Strategist at quointec, and the Host of the Tech on Reg podcast, recently named one of the top 10 RegTech podcasts. I was also named to the 2019 Women in FinTech powerlist by Innovate Finance.
« You Won’t Believe The Science of a Starship Landing!
Left-Brain v Right-Brain. Doesn’t Really Matter. Be Flexible In Your Thinking »

Why We Invested In Drip Capital — Financing For…