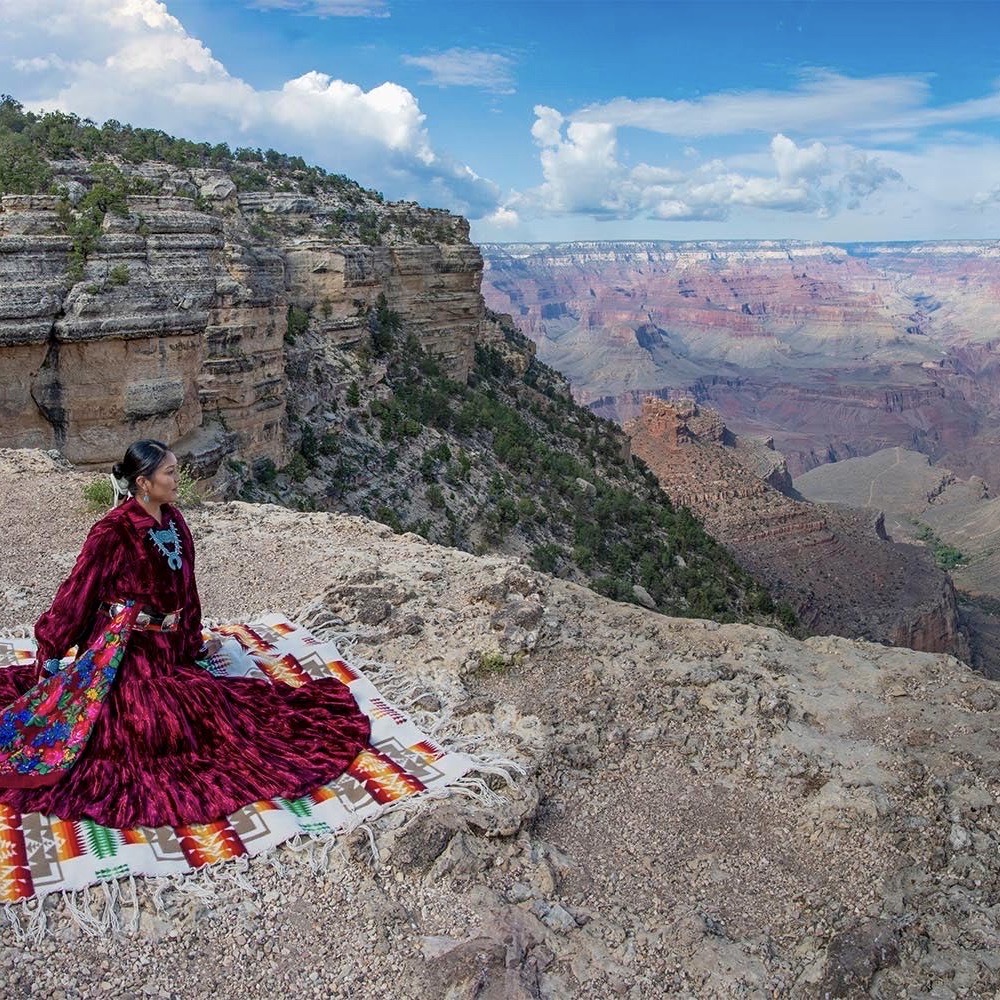 A Diné woman in a traditional dress, on the rim of Grand Canyon. NPS/M. Quinn

This month we celebrate Indigenous Peoples Day, let’s recognise how America’s most beloved natural attraction can redefine relationships with those for whom it is home

As a child, I read about the Grand Canyon, admired pictures in National Geographic, and listened intently to family members reveal just how awe-inspiring it is in person. Yet, when I was lucky enough to travel to Arizona at 14, it was in fact the initial silence I heard when approaching the edge of the South Rim that truly made me appreciate why the words “overwhelming” and “humbling” are so synonymous with the geological wonder.

As the world falls away at your feet, you are first awe-stricken by the mile high towering walls and dramatic vistas. Then, as your eyes fall, they meet the meandering 277-mile-long Colorado River, to which the Canyon owes its very existence. Glazing up, layer by layer, the sculpted cliffs reveal a beautifully red coloured landscape and erosional masterpiece representing a unique testimony to two billion years of geological history.

In 2018, the Grand Canyon National Park saw more than 6 million visitors, spending had reached heights of $947 million. In 2019, the park celebrated 100 years since its designation; it was the second most visited national park in the USA. In 2020, the park, along with the rest of the world, felt the impacts of the pandemic; annual visitor and spending numbers fell by more than half. Yet, whilst many tourist economies struggled to bounce back, it seemed that the Grand Canyon had no trouble rebounding in popularity; the park saw over 4.5 million visitors spending an estimated $710 million in 2021. Though, as one of the Seven Natural Wonders of the World, is this at all surprising?

Whether it’s hiking a corridor trail, taking a railway tour, or admiring the landscape from the skywalk, the Grand Canyon has provided a wilderness haven for people from all over the world to connect with the outdoors. Yet, this has formed both a remarkable and disheartening problem. Due to its sheer immensity, people tend to think of the Grand Canyon as its own entity, but it is so much more than its majestic geology. It is a place of origin. It is communities. It is people, for whom the Grand Canyon has not only been a haven but their ancestral home for centuries and so, such an impact makes the entities it impacts even more important.

More than 10,000 years ago, the Grand Canyon was a silent vista, home to ancient humans. For at least the last 4,000 of those years, Native Americans have inhabited the canyon with the Ancestral Puebloan people being the first inhabitants. Yet, the arrival of settlers seeking land and gold in the mid-1800s would see the forced relocation of Indigenous peoples to other regions where they had to start over again. Considered as guardians of the Grand Canyon, the Havasupai people were forcibly removed from within the park boundaries as recently as 1928. Native people were cut off from migration paths, ancestral trails, places of emergence, and gathering sites, furthering the heart-breaking coexistence of suffering and beauty in such a wondrous place.

The 1970s marked a decade of change; the Grand Canyon Enlargement Act of 1975 transferred hundreds of thousands of acres back to the tribes. Whilst the government started to include tribes in park management decisions in the 1990’s, these communities have ultimately been pushed out of the park and disenfranchised over time. They have been excluded from stewardship, management, and economic opportunities; only about 6% of park service employees are Native, a disappointing figure when you consider that Native people make up more than 27% of surrounding Coconino County, Arizona. These decisions would reverberate emotional, physical, and economic hardships across tribal communities for centuries, weakening the already long and bitter relationship in existence with the Park.

Manager of the Intertribal Centennial Conversations Group,  Jack Pongyesva, a Hopi nation native is working to increase Native presence within the Grand Canyon National Park and throughout the region, by placing voices at the forefront of education, stewardship, and economic opportunities. His vision for a brighter future is economic empowerment through the re-examination of hiring strategies so that they consider interpretive staff that are Native American as well as those who don’t have access to internet or transport but would be qualified for certain positions. He is also intent on increasing youth presence in the park; there are some who have never even been to the Grand Canyon due to lack of visitational opportunities and affordability.  It is essential that young people are provided these opportunities so that they may recognise the work their ancestors did to fight to protect and preserve the canyon for them and that it will still be there for their own grandchildren and great-grandchildren.

A large part of the Grand Canyon experience is the accessibility to authentic and locally sourced Native arts and crafts. They represent the origin of so many things in Native religions and Indigenous culture. Yet, unbeknownst to many, the trinkets sold within vendor and concessionaire shops are largely fake. Not only this, but the park currently only lets Native artists sell their artwork under strict regulations; they’re limited to just selling crafts they’ve shown visitors how to create in cultural demonstrations.

Mable Franklin, who is Navajo claims that many members of the communities are vendors, and so, displaying their products for sale in the park is their way of life and is what sustains them. With a gift shop at almost every lookout of the park, facilitating this entry point will be life changing for many. It will not only enable money to flow to individual Native families but also towards the regional economies, thus benefitting communities at large.

Today, the Grand Canyon is the ancestral home of at least 11 Native tribes: the Havasupai, Hualapai, Navajo, Hopi, Zuni, Paiute Indian Tribes of Utah, Shivwits Band of Paiute, Moapa Paiute, Las Vegas Paiute, San Juan Southern Paiute and Yavapai-Apache. The National Park Service is required to consult with these tribes when making changes that might have an impact on them. Yet, the relationship between land protection and better representation are very much intimately entwined. Therefore, it is critical that the new phase of Grand Canyon tourism is wholly culture centric.

Future design models must consider two key entities. Firstly, relationships must be re-established through an acknowledgment and expression of remorse for the past. This will bring healing and understanding not only to victimised individuals and communities, but also to the greater culture and the world. Moreover, this will create room to move forward in a productive manner and allow for the park to engage in deep consultation with indigenous communities based on recognition of their worldviews and needs.

Secondly, it is critical that there is a focus on enhancing visitor orientation across the entire park. In a 2018 survey, it was determined that 40% of Americans didn’t think Native Americans still existed. For many Americans this stems from an education where teaching of Indigenous communities is relegated to history books that detail incomplete or false narratives. It is critical that educational intentions are rooted in honour, recognition, and respect. Rather than viewing the Grand Canyon as what it was before and what it is now, it should be examined from the point of view of the real human story that has been unfolding over time. They are one history, and we should be appreciating all of it at once.

The first in the National Park Service, Desert View is encouragingly reflecting this in its transformation into an Inter-tribal Cultural Heritage Site. As the east entrance to the Grand Canyon National Park from Route 64, Desert View is the first introduction for many visitors to the park’s diverse and rich cultural heritage (the Desert View Watchtower, proximity to neighbouring tribal lands, and panoramic views). Now, the Site is becoming a place very much in keeping with its origins. Through collaborative pathways for economic and cultural opportunities the Site is not only beginning to address the historic inequities faced by Native Americans but also increasing visitor engagement by elevating Native voices and allowing their stories to be heard by the world.

Renae Yellowhorse, a Navajo from Cameron

“The Grand Canyon itself, the whole area, is older than the park. There are original people that are there, and for it to continue on into the next 100 years, to the next millennia, is to recognize the original people from there are still there. We’re not in the history books, we’re not back then. We’re here right now. We work in the parks. We work to defend and protect the parks. Talk to me, ask me about my history. Ask me about how I feel about the canyon. Don’t ask a historian. Don’t ask an archaeologist that’s not Diné or a Native. Ask me, I’m right here.”

Erika Da Costa Hi, I'm Erika! My passion for writing has led me to cover topics relating to environmentalism and social sustainability, e.g. the impact of IoT and AI in Protecting Biodiversity, Sustainable Tourism and Healthcare.
« Medicare / Medicaid / Advantage — Where Are The Opportunities For Startups? — Part 2 of 2
Emotion AI: Can Machines Feel Emotions? No, But They Can Recognize Ours »