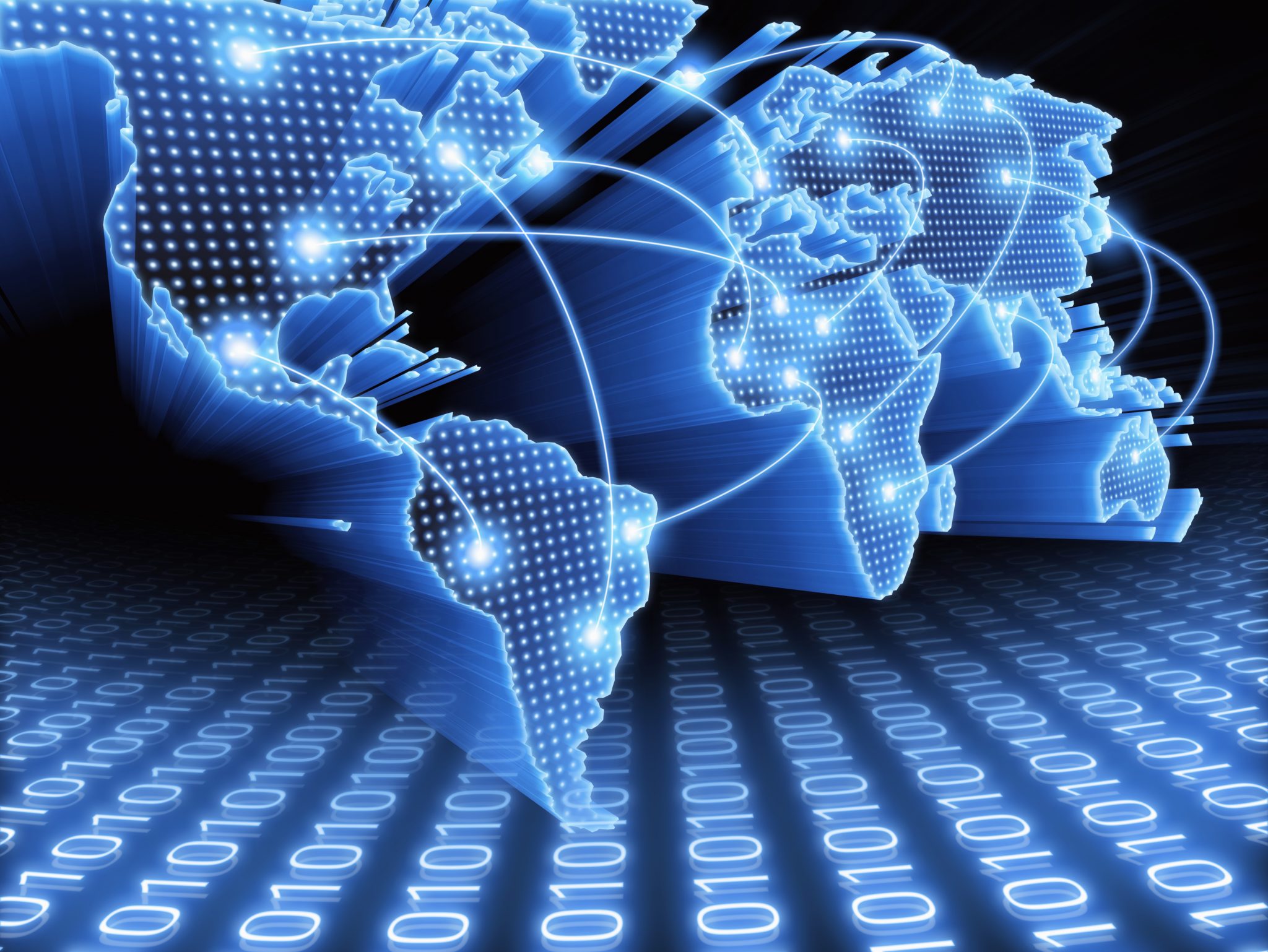 We always overestimate the benefits of technology in the short-term & underestimate it in the long-term. Technology after all is an iterative process which keeps on evolving on daily, weekly & yearly basis. And this holds true for the revolutionary Blockchain technology & the Cryptocurrencies. Imagine if anybody would have known this about Google, Amazon & PayPal at the peak of the dotcom bubble & eventual bust. Yes a lot of IT startups of the time went down under but good viable projects like them survived and emerged as game changers in tech industry. Even the prolific investor Warren Buffet regrets missing the bus on investing in these big names at the time.

I guess what I am trying to say is there is an analogy between the cyclical tech shift that took place at the end of the last century and the current Blockchain/Crypto movement that is causing a major paradigm shift across different sectors of the global economy – from decentralized blockchain networks, to peer-to-peer market places, new forms of digitized payments, smart cities and a whole lot of other disruptions across the Fintech spectrum.

First of all when disruptions of this scale & magnitude happen then older models of determining price, value, tangible benefits & growth trajectory can’t be used to determine the future path of those assets or digital assets in this case. Even the conventional methods of Regulating are not useful as we can see that the regulatory authorities around the world are having a hard time coming up with uniform measures to deal with the new technology. This of course calls for the adoption of RegTech (combination of Regulation with the help of technology) by the regulatory bodies, on which I intend to do another piece soon.

Let’s look at a couple of charts to make a data driven comparison on how Cryptocurrencies can move much higher than their current price levels. I am not going to present a “crystal ball prediction” about the prices but purely what the technicals on the chart dictate for this comparison. We will look at the chart of the U.S. Tech Index Nasdaq to compare the dotcom bubble movement with the Crypto leader Bitcoin since most of the coins pretty much mimic its movements. For calculation purposes we are making an assumption based off the chart that Bitcoin has created a low around the $5800 level in late June. 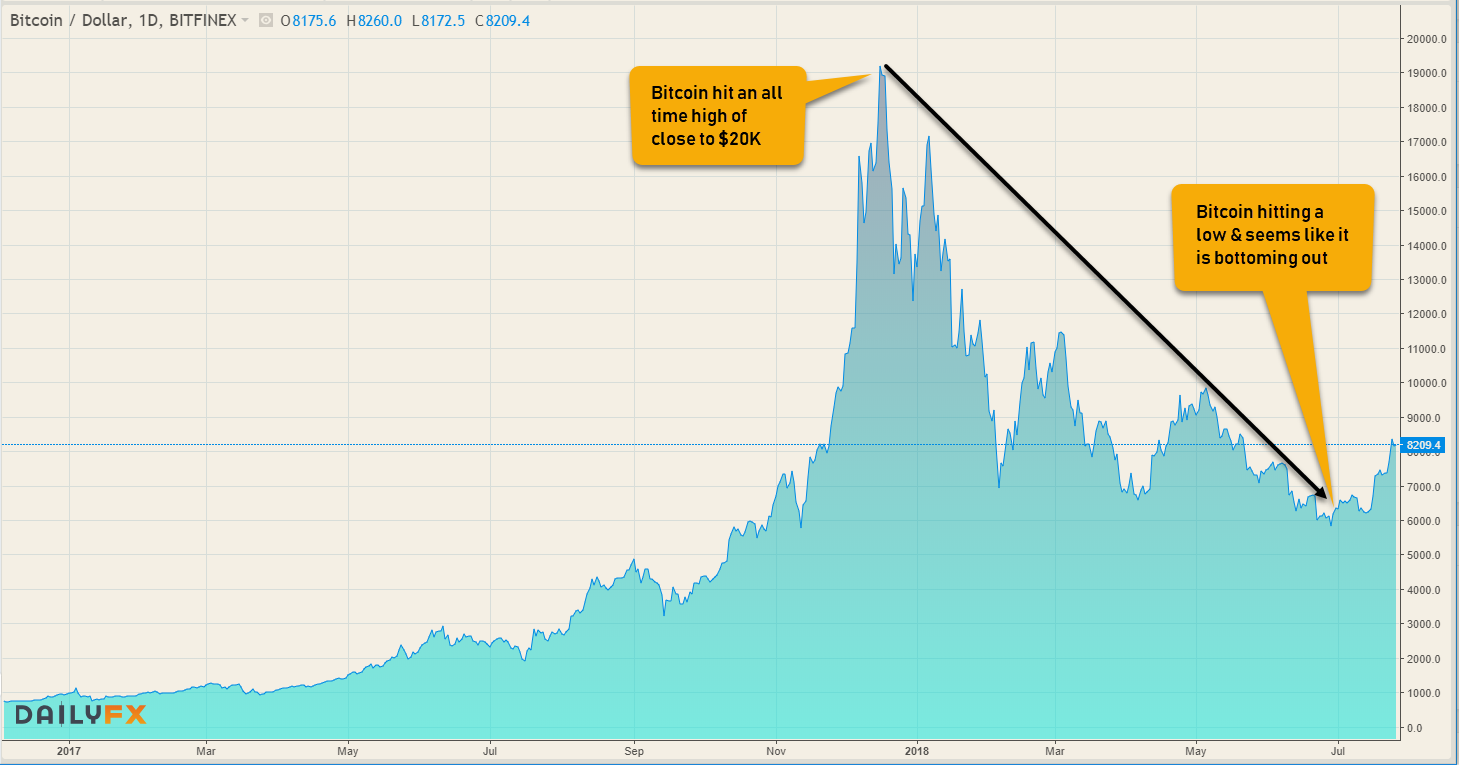 The charts are not to scale since we don’t have enough data for bitcoin to compare it on a weekly basis. You can see both Bitcoin (presumed bubble) & Nasdaq (dotcom bubble) peak to their highs in a similar fashion which is marked by the cyclical factors like media attention, greed, enthusiasm & delusion. And similarly the lows were preceded by denial, fear, capitulation & despair. All these emotions are typically associated with any economic cycle.

Two main takeaways from this comparison – one is that Bitcoin is following the same economic cycle like any other asset, commodity or an economy would. And secondly based on the earlier assumption off the technical chart levels, a rebound seems to be taking shape in the Crypto leader. Keep in mind that Nasdaq has gained almost 570% from its low reached in 2002 to the current levels. Now if we apply the same formula to Bitcoin’s current assessed low of $5800 it should be end up somewhere around $33000 for the next peak. The only difference between the two charts though is the time frame in which this might be accomplished – for Nasdaq it took almost 16 years for the current peak to achieve, this might be a much shorter time frame for Bitcoin and there is where the paradigm is shifting, exponential growth over a short period of time. Not to say that Nasdaq followed the same route with only one significant correction only in 2008-09. And for all of those who think Bitcoin is a huge bubble, here’s a little perspective on all the bubbles that exist in the financial ecosystem right now & where Bitcoins stands among them.

Before you jump to any conclusion, the bitcoin price prediction above is just based on the charts of two technology components of financial markets and is supposed to provide forward guidance & not an investment advice. However I do provide my technical analysis on the Cryptos, Forex & Stocks on Twitter & StockTwits on a daily basis if you are interested. Moving on to some of the other fundamental factors that I believe is causing this paradigm shifting technology to go from strength to strength.

It might be a gradual process but the Blockchain movement & Cryptocurrencies are becoming commonplace with every passing day. Who knows a few years from now we might not even remember doing business any other way.

Faisal is based in Canada with a background in Finance/Economics & Computers. He has been actively trading FOREX for the past 11 years. Faisal is also an active Stocks trader with a passion for everything Crypto. His enthusiasm & interest in learning new technologies has turned him into an avid Crypto/Blockchain & Fintech enthusiast. Currently working for a Mobile platform called Tradelike as the Senior Technical Analyst. His interest for writing has stayed with him all his life ever since started the first Internet magazine of Pakistan in 1998. He blogs regularly on Financial markets, trading strategies & Cryptocurrencies. Loves to travel.
« Which Under-the-Radar Stocks Should I Consider with Significant Disruptive Potential?
Tech rollover, Crypto FUD & Market noise »