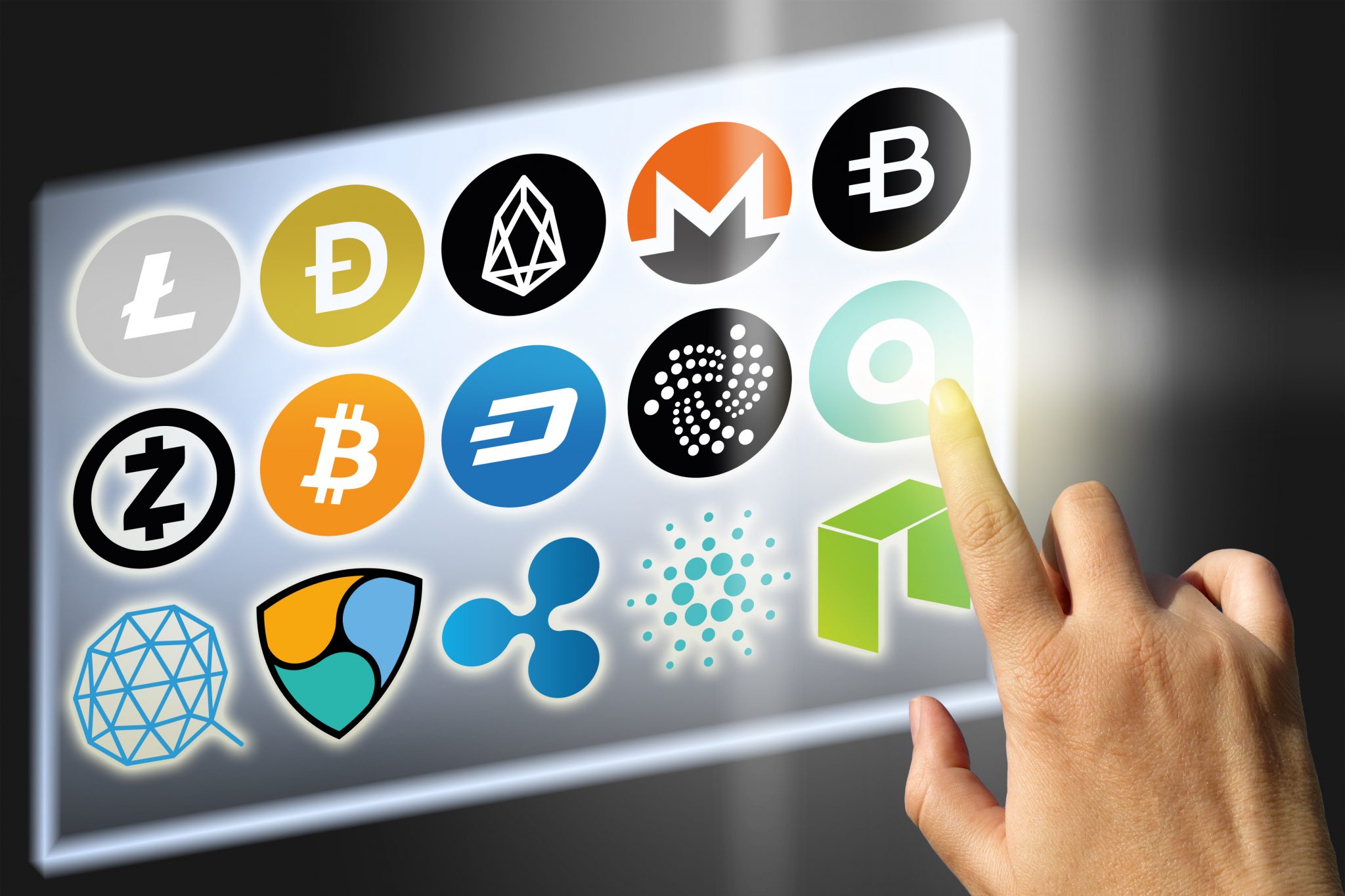 Originally it was just the Bitcoin (BTC) with the invention of the Cryptocurrencies and the dawn of associated Blockchain technology but the past few years have seen a mushroom growth of the brand new digital assets classified into different categories. For a layman, most of the Cryptos are still digital forms of payment but the actually it is not that simple. Let’s dig in a little further & try to decode the “mystery”.

The most generalized & commonly known of all the digital coins. Also known as the digital currencies & the payment tokens the premiere example of this kind of token is the crypto kingpin Bitcoin itself. With the booming Alt-coins market we have seen alternatives to bitcoin emerge as the digital currency. The most well-known are the offshoots of Bitcoin itself – Bitcoin Cash (BCH) & LiteCoin (LTC). They offer faster transactions & better scalability than the parent coin itself. Privacy-centric coin Moenro (XMR) is another good example which hides the amount & address of transacting parties. In purely technical terms Cryptocurrencies are meant to represent some inherent value without any valued added service, and supposed to function as a replacement to the traditional fiat currencies like US Dollar, Euro & Yen etc. Keep in mind though that Cryptocurrencies function on a DLT (Decentralized Ledger Technology) with no central authorities to monitor or control the transactions unlike role of the central banks in the current monetary system of fiat currencies.

These tokens given you the ability to use the services of a particular platform within the defined ecosystem. The tokens usually go on sale during the launch of the ICO. However, these tokens can also be earned by using the ecosystem of the platform in predefined ways. Utility tokens are not only a very good source of investment since their usefulness is only associated within the particular blockchain. The supply of such coins is fixed & you shouldn’t acquire the tokens in the hopes of seeing an increase in their value – having said that though, if the underlying product or service increases in value over time the App coins (or utility tokens) may see their value appreciate as well, being the only medium of transaction on the platform. Some of the well-known examples of Utility tokens are Basic Attention Token (BAT) – payment medium for the Brave browser, Storj (STORJ) – A decentralized Cloud storage platform, Golem – Global P2P marketplace for utilizing idle computing power & Filecoin – A Blockchain based storage network.

This form of digital token is pretty similar to having an ownership of a company with the issuance of an IPO – only here you are issued “digital shares” but you get the right to the profits generated by the company. The tokens can be acquired at the launch of the ETO and are also knows as Equity tokens or Tokenized securities since they provide the team to raise money for the project & the coin owners to profit, but all under the ambit of SEC (Securities & Exchange Commission) regulations like any other security on a stock market. ETO provides a new way of raising funds for a project by issuing digital token for any company (blockchain based or Not) in a public or private setting. The most notable example in this case is a Berlin based startup Neufund actively pursuing multiple projects in the Blockchain island of Malta. A new dimension has been added to these Equity token offerings recently with the issuance of an ICCO called Palladium – The platform will basically issue ‘tokenized convertible warrant’ which is regulated by the MFSA (Malta Financial Services Authority) & subject to stringent EU rules as well. This warrant will give the investors the right to convert it into shares eventually, which is 3 years in the case of Palladium. Another notable example of is this type of token is tZero – a subsidiary of the popular online retailer Overstock Inc.

You can accumulate these tokens by using & actively taking part in a blockchain based Ecosystem. Holding of reward tokens also symbolizes your standing within the ecosystem. These types of tokens are difficult to value & therefore might not be a good choice from an investment perspective. They are more like your reward for using a blockchain platform & being a loyal user. You can, however, exchange reward tokens for any other Cryptocurrency on any digital exchange. One of the biggest examples in this regard is the blockchain based social media platform Steemit (STEEM) – where users are rewarded for posting content & engaging with other users of the platform. An interesting development has been the launch of unified blockchain based Rewards platform called Rewardstoken which is basically attempting to unify the rewards of the all the major merchandisers & retailers using their Ethereum (ERC 20 based) reward token. Eventually (as they claim), you can redeem these reward tokens anywhere in the world seamlessly.

These kind of tokens are backed by the physical commodities like Gold, Oil etc. and are linked to the prices of these commodities. This becomes their biggest drawback for people looking to into tap into the huge upside potential of digital coins however, since the price of these tokens does not exceed the price of the underlying physical asset. For people who are much more comfortable of having the ability to buy the physical asset with digital coins along being part of the blockchain movement Asset backed tokens are a good choice. These kind of coins have been on the rise with the extreme volatility of Crypto coins and being titled as having no intrinsic value. The biggest example is Goldmint project which has issued a stable coin called MNTP backed by Gold. Another recent addition to this has been the Dubai based OneGram (OGC) project again backed by gold but with an interesting twist – 70% of the 1% transaction fee generated is reinvested to buy more Gold and added to the reserves of the precious commodity thus increasing the amount of gold that is being backed by each OGC coin (incentive for people looking to get greater appreciation). And finally we have a national Cryptocurrency Petro issued by Venezuela which is backed by its oil reserves. Although it has failed to gain much international acceptance it has nevertheless highlighted the growth in Cryptocurrencies & Asset backed tokens in particular.

As evident from the name these kind of coins can be used for multiple purposes like Payment for services and bonuses for work performed etc. Existing traditional business models which decentralize themselves & issue digital tokens, which can not only be used on the new platform but can be used to exchange with other Cryptocurrencies or as payments is an example of a Hybrid Token offering. An example of this is the Kik messenger app which issues their hybrid digital coin Kin to function as such.

Tokens which confer on a holder the right to vote and the ability to influence project development. Basically these kind of tokens are used for decision-making. Votem is an example of an online mobile voting platform which uses their tokens to make this process simpler & more secure. Here is a list of some of the other Voting platforms utilizing voting tokens.

A token used as an internal currency to pay for project services being initiated but at the same time can be replaced by any other coin like Ethereum (ETH) without damaging the product or the ecosystem around which it is built around.

The biggest advantage of the Digital assets market is perhaps the wide variety of investment instruments that it offers in the form of these digital coins giving you an opportunity not only to earn from their immense growth potential but also to be a part of the this transforming blockchain movement.

Faisal Khan Faisal is based in Canada with a background in Finance/Economics & Computers. He has been actively trading FOREX for the past 11 years. Faisal is also an active Stocks trader with a passion for everything Crypto. His enthusiasm & interest in learning new technologies has turned him into an avid Crypto/Blockchain & Fintech enthusiast. Currently working for a Mobile platform called Tradelike as the Senior Technical Analyst. His interest for writing has stayed with him all his life ever since started the first Internet magazine of Pakistan in 1998. He blogs regularly on Financial markets, trading strategies & Cryptocurrencies. Loves to travel.
« Market Movers & Shakers
Augur, Assassination and Morality on the Blockchain »

One Reply to “Classification of Digital Coins”