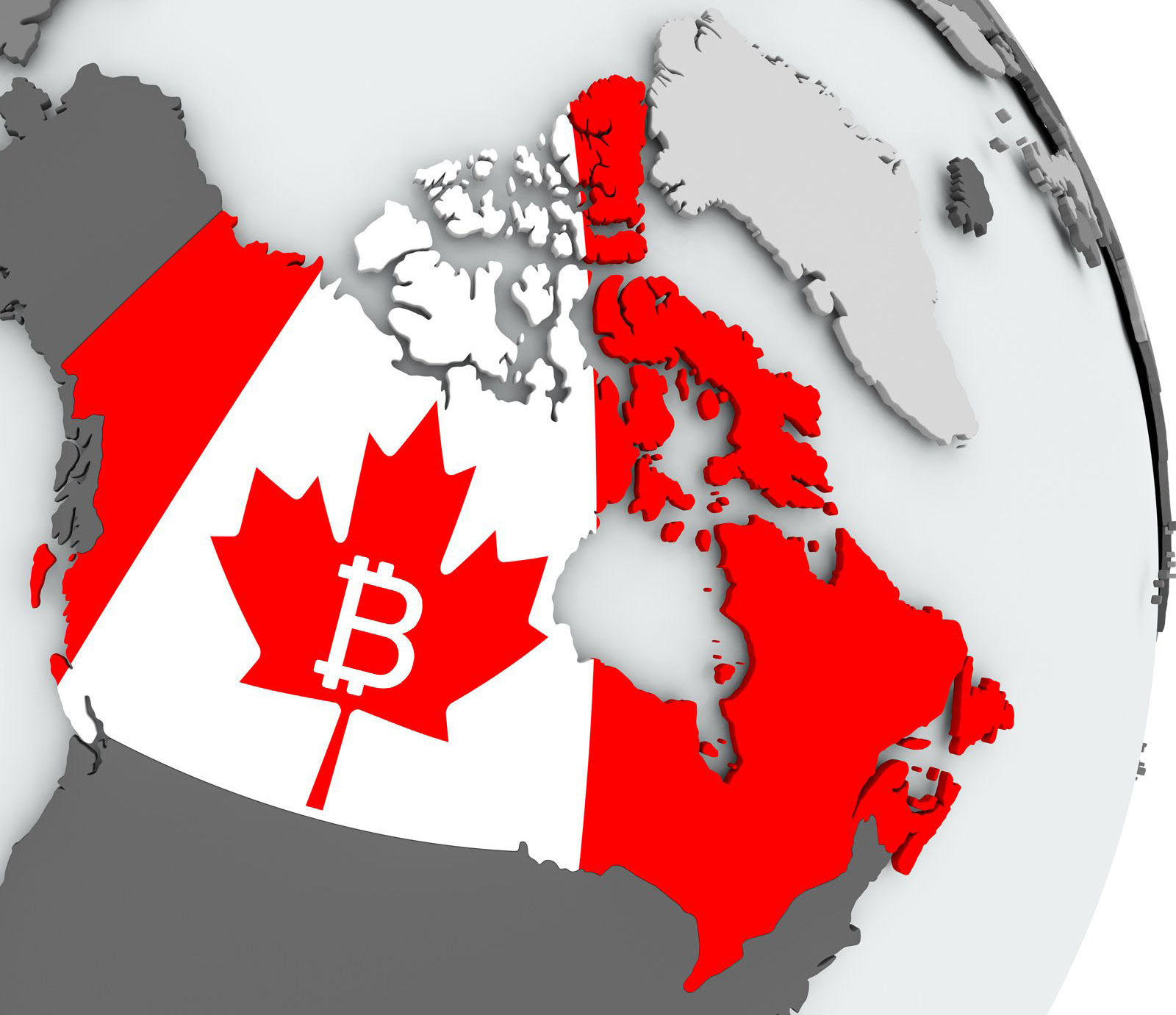 There is absolutely no doubt in my mind after living in the Great White North for 18 years that Canada is one of the best countries of the World to live in but we are not here today to discuss the morals of that debate but something else. The only challenge that even the most hard-core Canadians have to face is in the form of the extended winter season where temperatures plummet to extremely uncomfortable levels but seldom did I realize till now that even the only “downside” to living in Canada would become a huge positive… well at least as far as Crypto mining is concerned! And that is exactly why Canada has become a destination of choice for so many Crypto mining companies – cheap electricity & cold temperatures to keep those facilities running smoothly.

Most cryptos especially have been criticized for being too energy intensive to mine, especially Bitcoin. This problem has become a bigger issue ever since the price of the crypto kingpin has dropped almost 70% from an all-time high of $20K & continues to struggle. Relatively cheap & reliable electricity has become the number one priority for Bitcoin miners in recent times. Toronto’s Hut Eight proclaiming itself to be Canada’s largest miner; operates one such facility in Drumheller of Alberta Province. Similar facilities have cropped up around the country in other Canadian Provinces of Quebec, Manitoba & British Columbia. The chart below compares the electricity prices by the cheapest rates of different cities in North America. No wonder Crypto entrepreneurs are making Canadian cities their favored choice for mining operations. 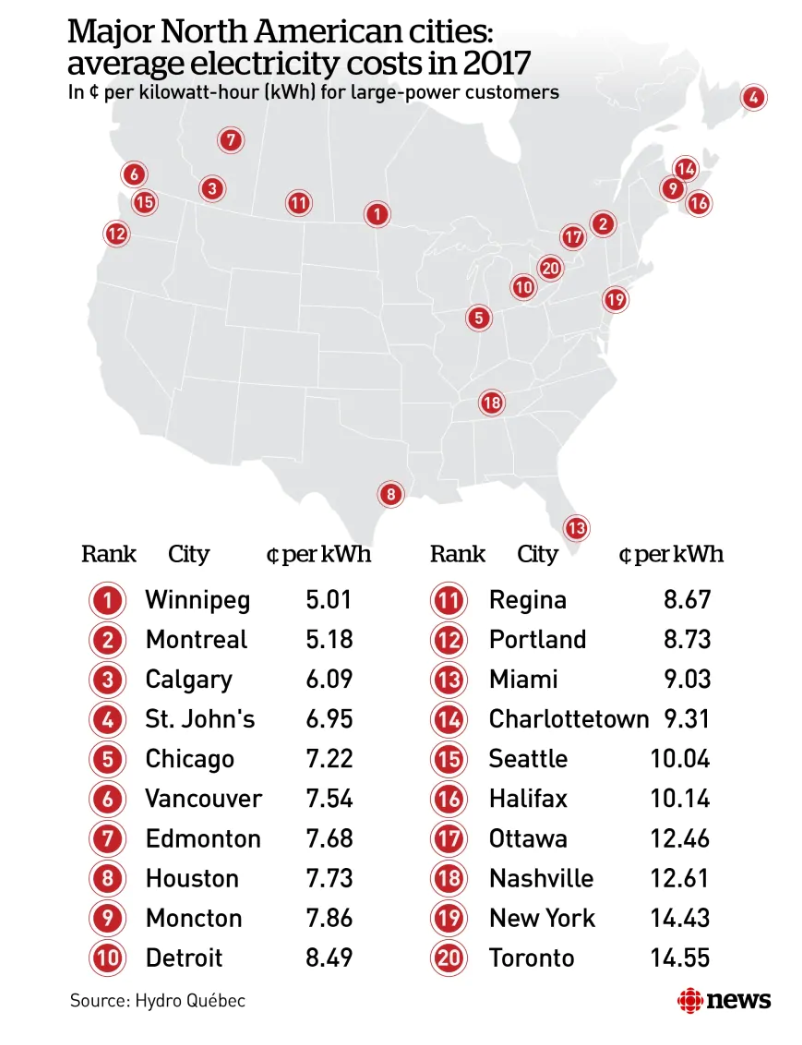 Province of Quebec, in particular, has been an eye candy for Bitcoin miners because of its cheap renewable power. Bitmain, which has the biggest crypto mining operations in the world has been eyeing Quebec as a home ground for furthering its international expansion plans. Other countries like China may still have cheaper power available but the added political stability & stable regulatory regime acts as the other selling features of Canada. A lot of Chinese players have shown an interest to move their mining operations to Canada as the Chinese blanket ban on Crypto mining, trading & ICOs continues.

This heightened interest in Canada for crypto mining operations has sparked the entrepreneurial spirit domestically as well with companies cropping up; offering diversified solutions with a niche in mining operations. One such company is DMG Blockchain solutions (Vancouver based) distinguishing itself by providing MaaS (Mining-as-a-Service) operations, which basically means providing mining services for the third parties on their facilities. The Digital Mint Group (DMG) is also working with an existing license provider to setup a blockchain based supply chain system. Other Value-added services include Blockchain & Risk analytics via APIs to process valid and secure transactions.

Arguably Canada’s biggest digital stock exchange Coinsquare has recently partnered with another MaaS company HyperBlock. The latter is a diversified Crypto solutions provider who claims to have the most efficient & largest Cryptocurrency data centers in North America with 13,000 machines working in U.S. & another 8,500 added to their recent expansion into Canada. HyperBlock provides one-stop solution from the creation to the storage of your digital assets. HyperBlock also acquired CryptoGlobal with all its outstanding shares – another crypto mining company which had its mining operations for Bitcoin, Dash, Ether & Litecoin based in Hamilton city of Ontario Province. Both companies now function as HyperBlock Technologies Corp. CryptoGlobal & Hut Eight had already gone public.

Another big name that has developed a name for itself on Canadian Crypto mining scene is HIVE, also based out of Vancouver. This company made history when it launched as a public company on the Toronto Venture Stock Exchange in 2017 (TSX.V:HIVE) providing investing opportunity to people who want exposure to the crypto mining scene. Their partnership with Genesis mining (largest Cloud mining company) saw a big jump in their stock prices, which have retreated significantly since then with the general slump in the Crypto market. HIVE has huge mining operations in Iceland, Norway & Sweden. HIVE also has the distinction of mining, not just Bitcoin but Ethereum, Litecoin, Dash, Monero & ZCash. Mention here of another Toronto based Cloud mining company MiningBuster which offers you third-party services for all your mining needs.

Canada continues to provide just the right ecosystem for technological innovation & progress. Broad-based investments in the field of AI, Fintech & Blockchain combined with a diverse & skilled workforce has positioned Canada as a global center of influence & tech hub of the future.

Faisal Khan Faisal is based in Canada with a background in Finance/Economics & Computers. He has been actively trading FOREX for the past 11 years. Faisal is also an active Stocks trader with a passion for everything Crypto. His enthusiasm & interest in learning new technologies has turned him into an avid Crypto/Blockchain & Fintech enthusiast. Currently working for a Mobile platform called Tradelike as the Senior Technical Analyst. His interest for writing has stayed with him all his life ever since started the first Internet magazine of Pakistan in 1998. He blogs regularly on Financial markets, trading strategies & Cryptocurrencies. Loves to travel.
« Blockchain and Data Storage: A Perfect Match?
The New age of Digital identity & its challenges »