Infographic: The Business of Hemp 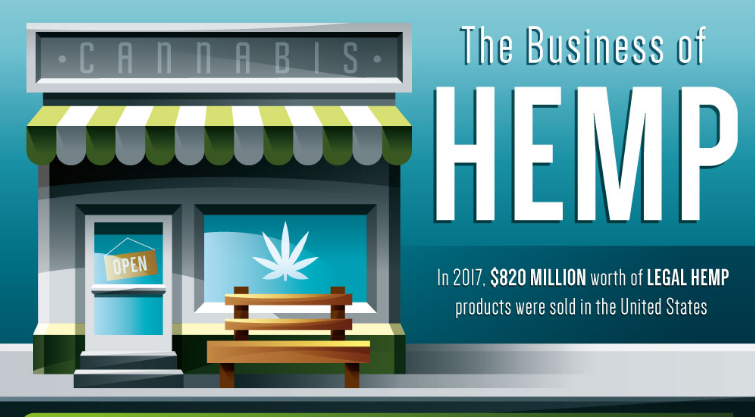 In 2017 alone more than $800 million worth of legal hemp products were sold in the United States. Grown in 19 states across 25,713 acres of land and the subject of studies among 32 US universities, our fascination with hemp is booming. Though its controversial past continues to permeate discussion, it is no longer acting as a roadblock to success.

The legal challenges began back in the late 19th century and many still remain to this day. Even the acquisition of viable seeds is a challenge due to the long-term legal prohibitions surrounding it. In 2017, 1,465 licenses were issued to individuals to grow hemp and it is projected that by 2021 legal cannabis will be a 40$ billion industry. Surprisingly, this is not the first time in history that the laws surrounding hemp cultivation were revisited. A little-remembered government program during the WWII era called “Hemp for Victory” encouraged farmers to grow and develop hemp to be used as rope, parachutes, and other necessary textiles to aid in the war effort.

Take a look at this infographic for more on the state of hemp production in the US, how industries are standing up to antiquated laws, and what hemp development could mean for the future economy, healthcare, and even the environment.

Brian Wallace Brian Wallace is the Founder and President of NowSourcing, a leading infographic design agency in Louisville, KY and Cincinnati, OH which works with companies ranging from startups to Fortune 500s. Brian runs #LinkedInLocal events, hosts the Next Action Podcast, and has been named a Google Small Business Advisor for 2016-present.
« Smart Dubai – World’s First Blockchain-powered Government initiative
How the Textbook Industry has Finally Been Disrupted and Will Continue to Change »