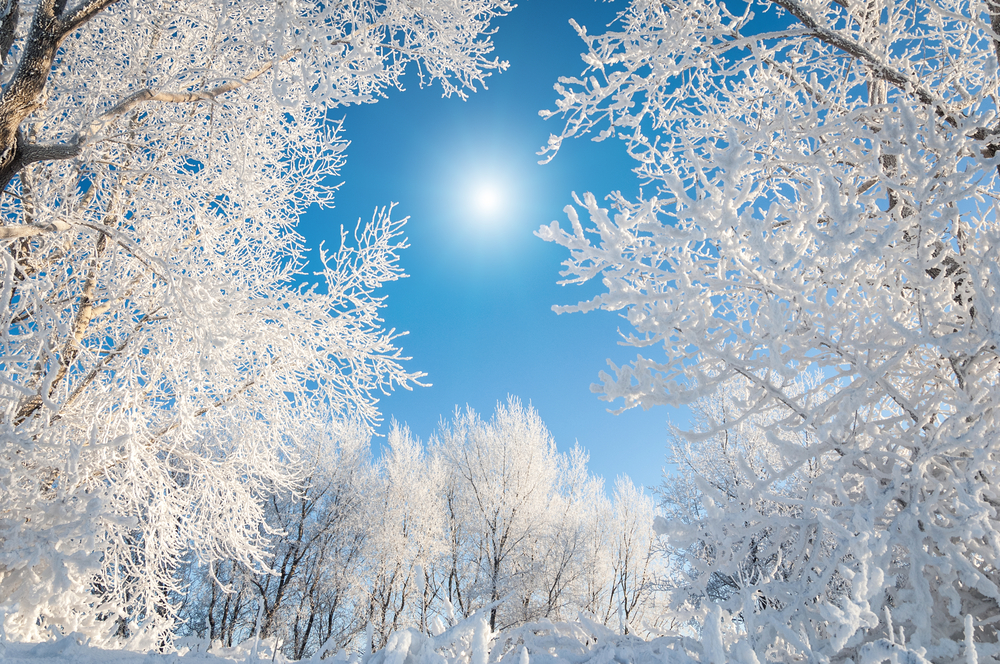 Things in Cryptocurrencies are as chilly right now as the winter gets up here in Canada. But here’s the thing… the carnage that started in the digital coins has now spread over to other financial markets as well. With the U.S stocks plummeting almost 4% last week, the markets don’t exactly seem to be in a holiday spirit right now. Volatility was once again the main theme across all three segments of the financial markets with equities plummeting, Cryptocurrencies getting crushed as Greenback held its own but with a little more indecisive tone in FX markets. Let’s review some numbers before moving on… 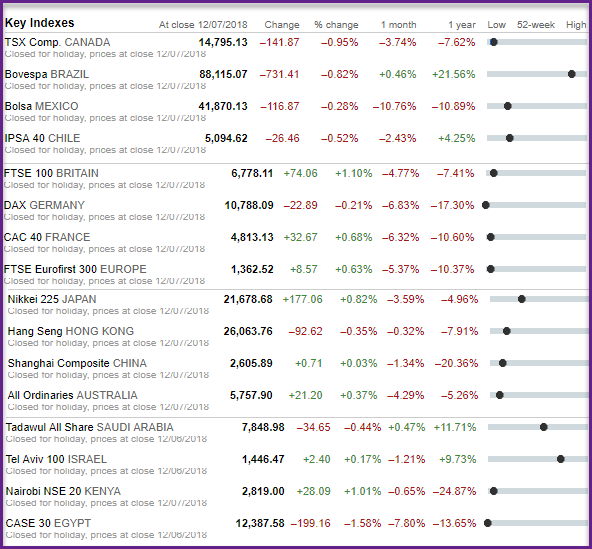 Starting off with Cryptocurrencies as usual… it’s bone-chilling cold in the Cryptoverse with the unstoppable decline in prices. The newswires are so busy reporting the busting of the “crypto bubble” that the good news happening in the digital world are getting obscured in all this noise. The continued delay in bringing forth of the much awaited Crypto regulation by the financial authorities with the recent news from U.S SEC to delay the Bitcoin ETF decision to Feb. 27, 2019 & an ongoing split in the Crypto community is not helping the case. As if the “hash war” between the BCH ABC & BCH SV was not enough to rock this sinking boat, TRON CEO Justin CEO tweeted this:

“#TRON will build a fund to rescue #ETH and #EOS developers from the collapse of their platform as long as those developers migrate their dapps to #TRON. #TRX $TRX“

To which EOS New York was prompt to reply with this:

“We think we will be just fine given the billion dollars in VC funding for #EOS and #EOSIOprojects that is locked and loaded around the world at Galaxy, SVK Crypto, Tomorrow, etc. Appreciate the offer, though. Best of luck, Justin.” 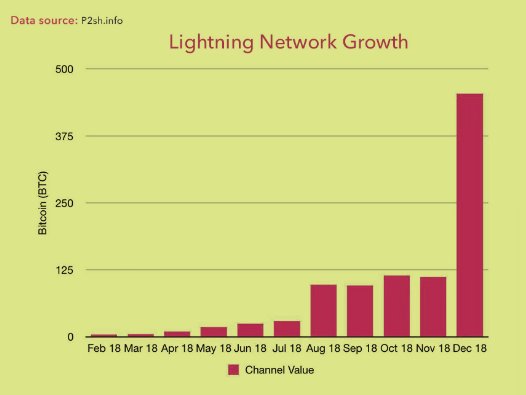 It’s not all doom and gloom for the Cryptocurrencies though – Lightning Network (LN), the sidechain scalability solution for Bitcoin broke another milestone when the capacity increased to 4,000 nodes with a volume of 460 BTC. This is an impressive feat for the upstart Blockstream (and the general Crypto community), which started out as 50 nodes back in January. Looking at the Bitcoin hourly chart, it has continued to make lower lows after breaking the significant support level of $5800. At the time of writing, it is trying to recover from a low of around $3300 but as long as the resistance zone of $3750-$3850 holds, the strong bearish momentum will stay intact. For the long-term, the previous strong support of $5800 is now the biggest barrier towards any kind of recovery for the Crypto kingpin. Total market cap @ $106 billion with BTC dominance of 54.9% at the time of writing. 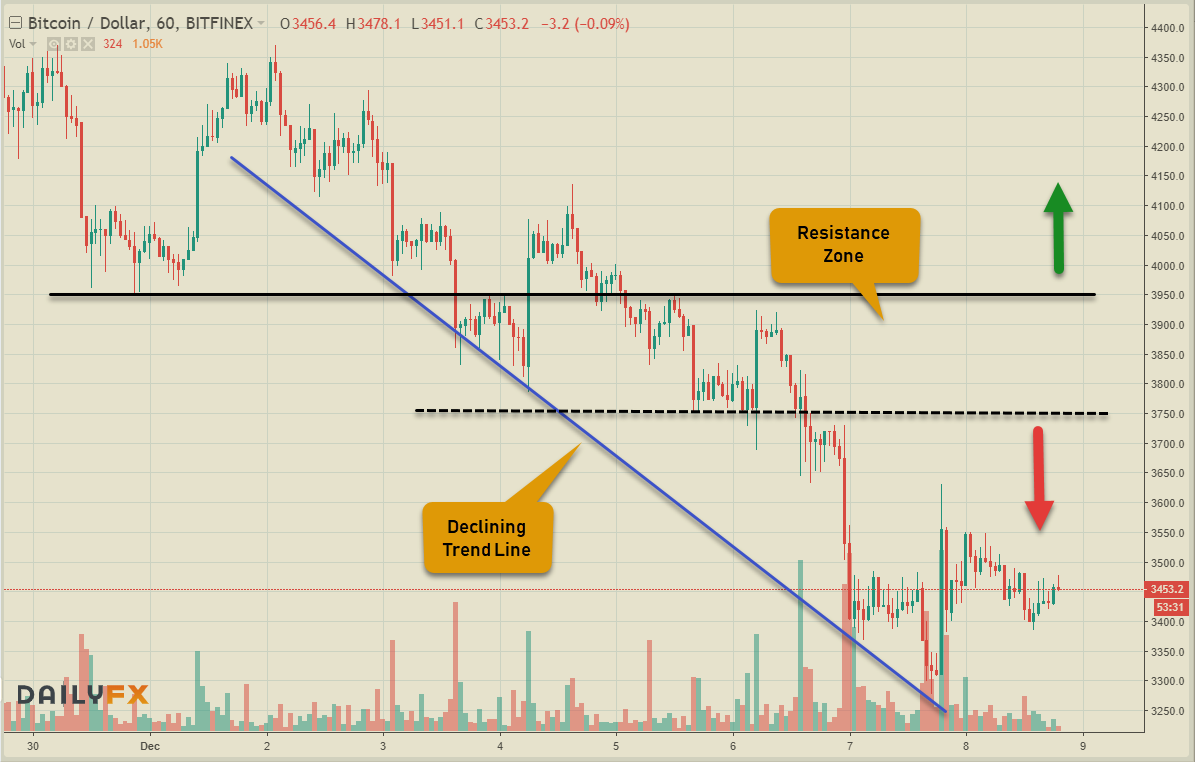 It was a significant week for the Equity markets with the U.S Stocks finally giving up all the gains for the year, after a volatile week which started off on the optimism that the two biggest economies of the World were moving towards a trade truce, but the euphoria proved short-lived as the sentiment turned sour, especially after the arrest of the China-based Huawei CFO in Canada on account of dodging Iran sanctions – the telecommunications company has its presence in more than 170 countries. This will most certainly throw cold water on the conciliatory efforts between U.S-China & make the markets even more edgy going forward. Although Crude Oil managed to recover some losses before Friday close, the commodity nevertheless remains under pressure with the continued Oil glut & fear of a global economic slowdown. 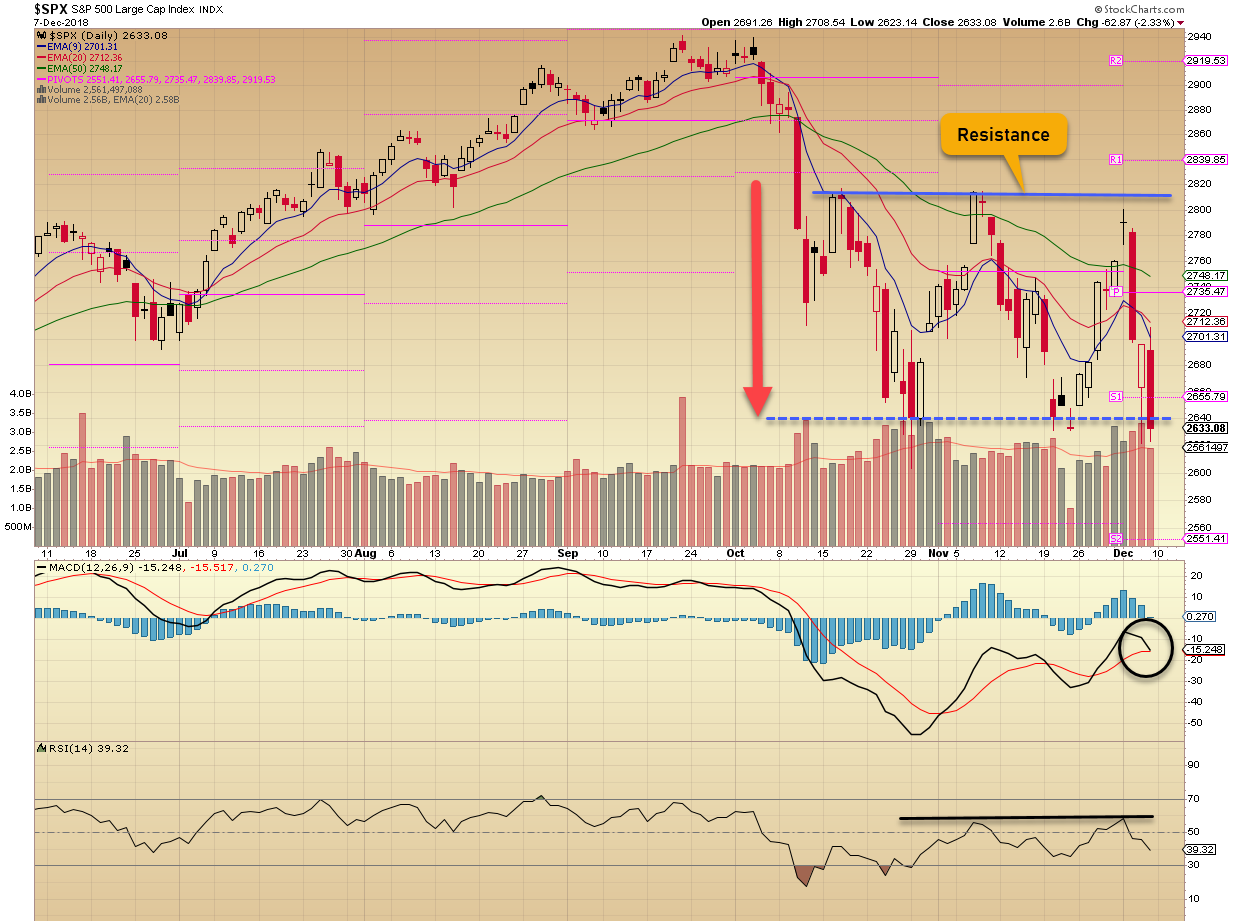 The U.S market indices Dow, S&P 500 and Nasdaq all closed down 4.4%, 4.6% & 3.1% respectively with the with the 10-year treasury yield fading to 2.85%. How do things change rapidly in financial markets is evident from the S&P chart. Last week, it looked like the index was going to recover or consolidate for a while before making the next move but the plunge this week seems to be dictating otherwise. With the index closing in on the previous low created in October end, a break here would mean significant downside correction. Although we are still about 250 points away to be in the bearish zone (20% correction from the peak of 2940), it certainly looks like the next target, if the current support level breaks. The RSI wasn’t able to sustain itself above the neutral 50 zone either. 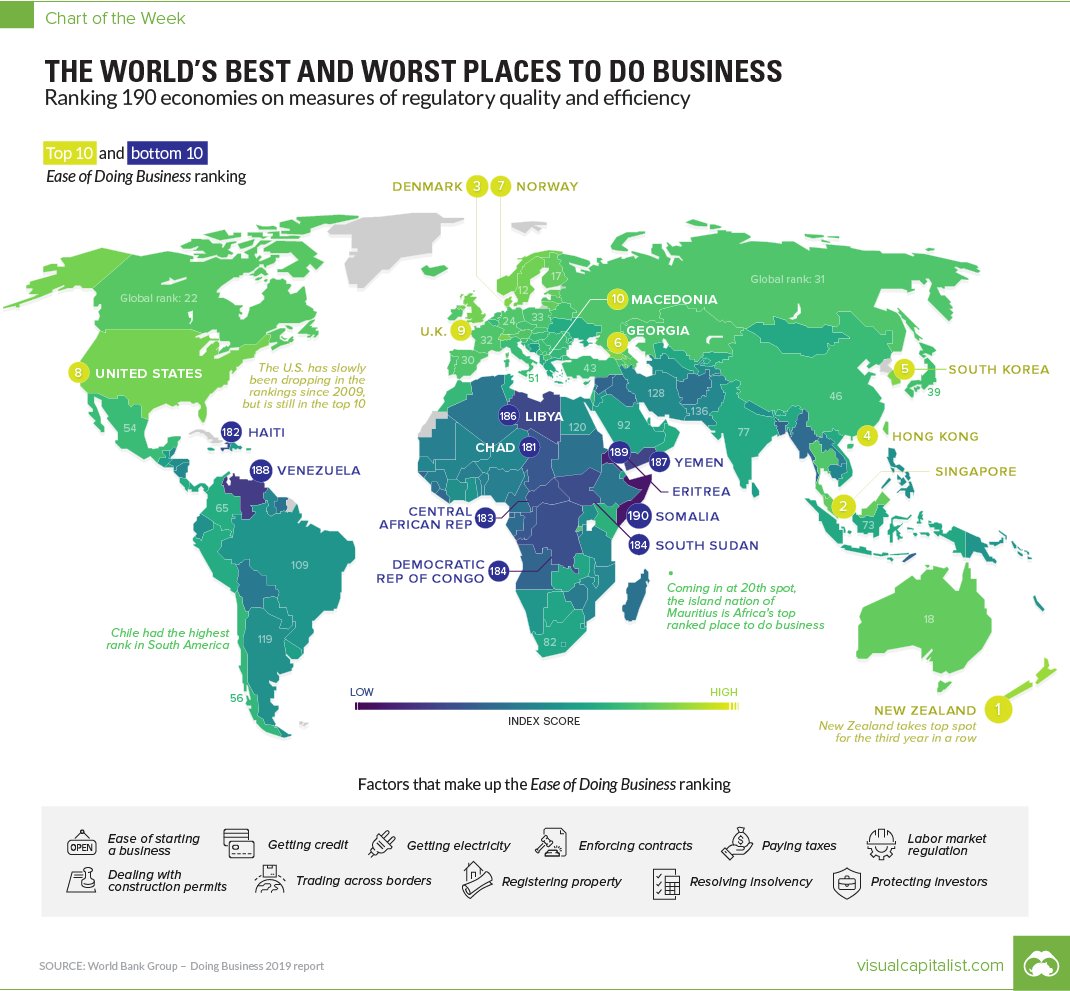 Geopolitical events in Europe are not helping the cause of the financial markets either. The dragging Brexit negotiations, the Italian budget spat with EU & now unrest in France over imposition of fuel tax, which has now been suspended. Also, France has decided to tax tech giants on their digital revenue starting from 2019 if a deal is not reached amongst EU members by then. All this uncertainty has helped the Greenback maintain its strength in the Forex markets. Although the Dollar index slid from its highs on account of a resilient Euro which makes up about 30% of the Dollar Index. The index has moved into a congestion zone as evident from the chart – we see lower highs & higher lows concurrently  which are presenting a contradictory picture, but presents a scenario where a breakout in either direction is imminent sooner rather than later. 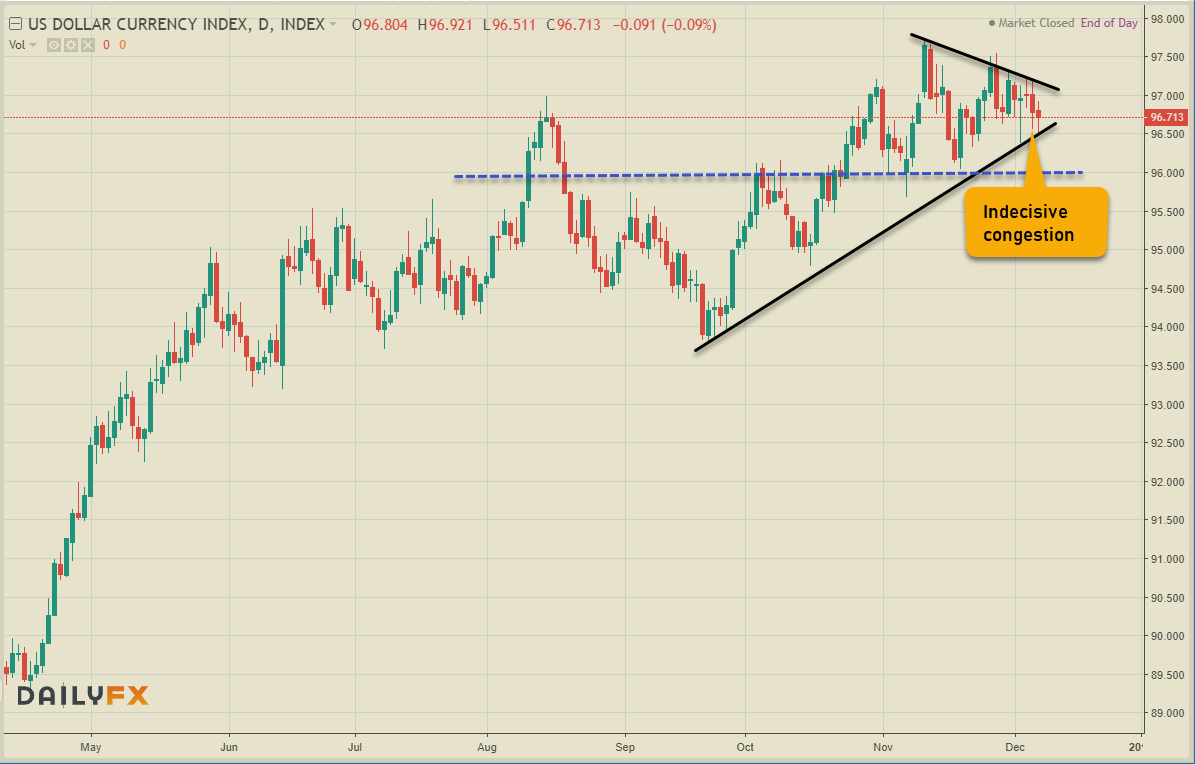 EURUSD seems be carving out a base on the daily chart but the real fate of the pair will depend on how the events discussed earlier unfold in the next few weeks. Commodity currencies were generally weaker with the risk off sentiment while GBPUSD remained choppy with a bearish bias. The pair is lining up for a major breakout move with the Brexit vote scheduled in the British Parliament for December 11th. USDJPY weakened further with a worse than expected NFP report out of U.S. Lots of data releases next week with important ones being the U.S CPI & Retail sales and ECB & SNB rate decisions. 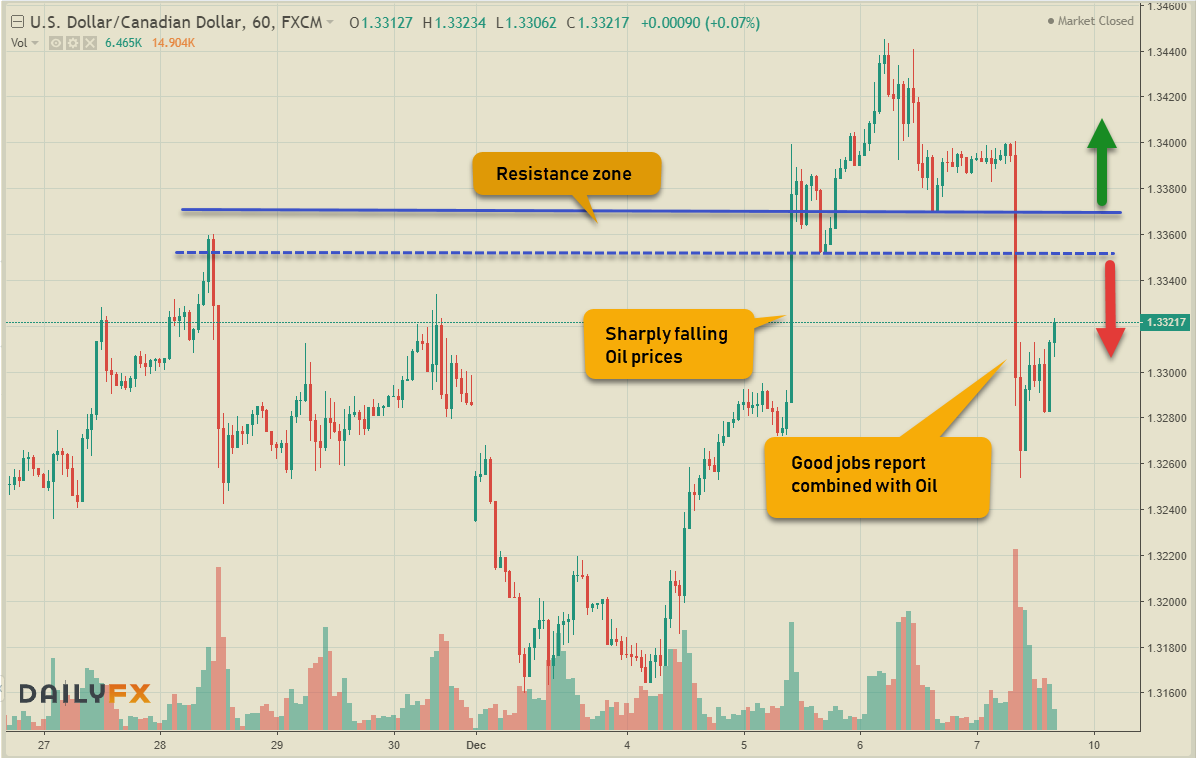 USDCAD got whipsawed with a lot of volatility last week. It spiked earlier in the week (taking out the 1.3400 level) with a plunge in Oil prices before recovering on Friday as Oil rebounded 2% & a better than expected Jobs report out of Canada. However, the bullish momentum stays intact for the MT in the pair, as long as the support around 1.3180 on the daily chart stays intact.

Signing off now with a comic representation of Bears knocking the Bulls out in Equities. 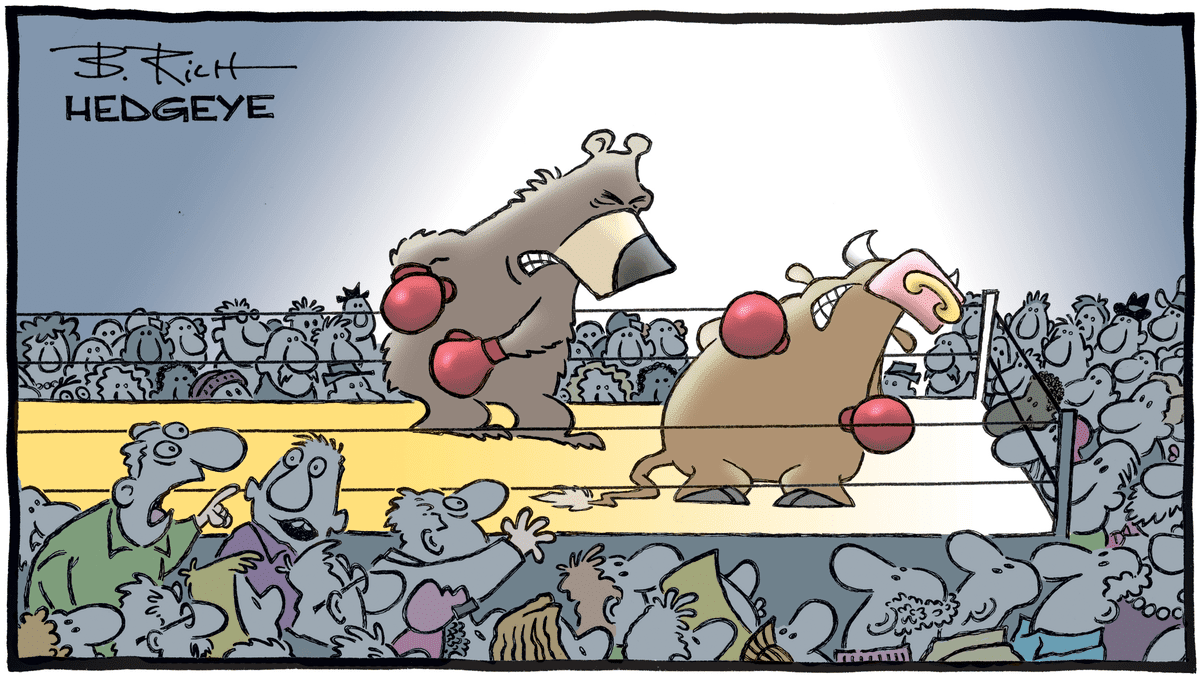 Faisal Khan Faisal is based in Canada with a background in Finance/Economics & Computers. He has been actively trading FOREX for the past 11 years. Faisal is also an active Stocks trader with a passion for everything Crypto. His enthusiasm & interest in learning new technologies has turned him into an avid Crypto/Blockchain & Fintech enthusiast. Currently working for a Mobile platform called Tradelike as the Senior Technical Analyst. His interest for writing has stayed with him all his life ever since started the first Internet magazine of Pakistan in 1998. He blogs regularly on Financial markets, trading strategies & Cryptocurrencies. Loves to travel.
« World’s biggest Crypto Exchange Binance is launching a competitor for Ethereum
What Causes Work Fatigue? »