It is common knowledge now that 2018 saw a resurgence of stable coins & digital securities as the two emerging & popular themes in the Cryptoverse. The scalability challenges, however, have been hogging the Blockchain/Crypto space & has been one of the biggest roadblocks in the adoption of the technology in the mainstream. The most well-known player in this space which is being used in real life cross-border payment system is Ripple with a verified speed of 1500 TPS but claims it can achieve much higher 50,000 TPS. A bunch of other scalable solutions are in the development & testing phase. 2019 should see a few of these projects transitioning to the implementation stage. Will talk about one such blockchain solution at the end of this piece. The figure below shows the claimed & estimated speeds of some of the major blockchain/crypto networks & their speeds of processing. As it’s pretty obvious, much more needs to be done to compete with mainstream players like VISA which processes at a speed of 1,700 TPS with a maximum claimed capacity of 24,000 TPS. 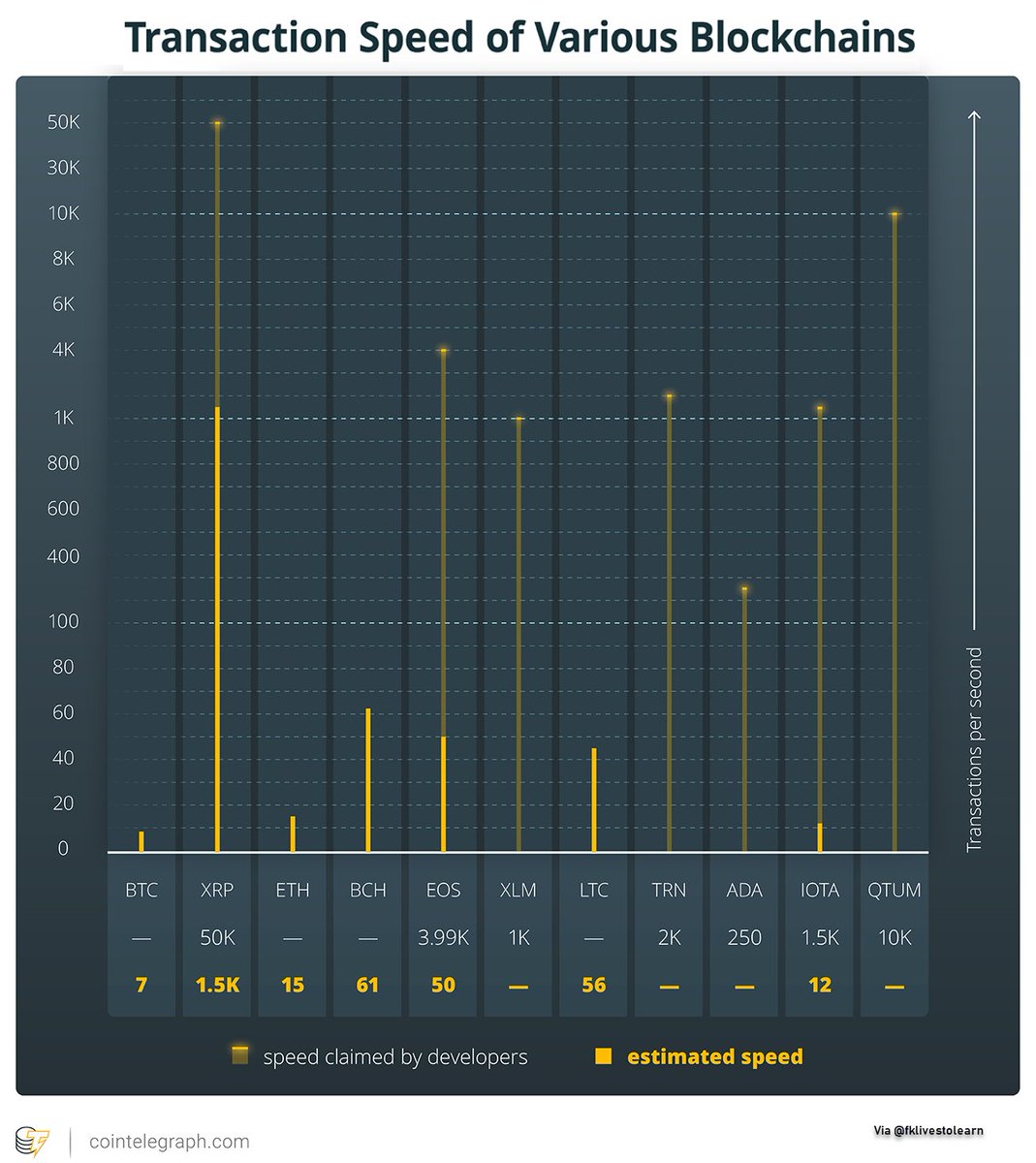 While the Crypto kingpin Bitcoin (BTC) is the most widely recognized, traded & utilized digital currency, its inability to scale (@ only 7 TPS) signifies its immediate shortcoming. Although 2018 saw the emergence of the Lightning network & Liquid sidechain solution – both aimed at improving its transaction capacity significantly, the benefits are yet to be seen. It augurs well for the Cryptocurrencies when you have top educational institutes of the World like MIT & Stanford pooling their brightest minds on one platform to solve the scalability problem –  by proposing a globally scalable payment solution dubbed as Unit-e. The development of the Cryptocurrency is taking place under the umbrella of Distributed Technologies Research (DTR) – a Swiss-based Non-profit organization, which includes researchers from seven major U.S. universities, including the Massachusetts Institute of Technology (MIT), Stanford University and the University of California, Berkeley. The core developing team would be based in Berlin & will be receiving financial funding from Pantera Capital. The goal is set to achieve 10,000 TPS by the time of its launch in the second half of the year. As per the Press Release:

“The project’s ideology is firmly rooted in transparency, with a belief in open-source, decentralized software developed in the public interest with inclusive decision-making. Good governance is essential for maintaining this ideology and fostering the long-term development of the Unit-e ecosystem.”

MIT is apparently working on two projects simultaneously. In a more recent but a similar development, MIT News reported that the researchers at the University have come up with a cryptocurrency called Vault which will be used on the newly developed Algorand network – invented by Silvio Micali, the Ford Professor of Engineering at MIT. The researchers are claiming the network is more secure, scalable & decentralized than any of its competitors and predecessors. Here are the key features of Vault:

The Project Paper will be presented at the Network and Distributed System Security Symposium next month.

In another related development, Enterprise blockchain platform Insolar (INS) achieved an impressive 10,229 TPS at the time of its testnet launch on January 22. Unlike the other networks, INS claims that given nodes don’t compute & verify transactions simultaneously – each smart contract is processed by an Executor node after which the verification process is passed on to Validator nodes. This break up of the process increases the transaction capacity drastically as more nodes get added on to the network. The transition from the testnet to the Mainnet would provide the proof of this claim holding. The network was processing 50 TPS at the time of writing.

It remains to be seen whether these ambitious competitors to Bitcoin be able to deliver on their promises of achieving scalable networks without compromising the all important decentralization. Coming together of the strongest minds, top educational institutes & Venture capital funding, however, is a testament to the fact that digital currencies & DLT is here to stay & things are looking up.

Faisal Khan Faisal is based in Canada with a background in Finance/Economics & Computers. He has been actively trading FOREX for the past 11 years. Faisal is also an active Stocks trader with a passion for everything Crypto. His enthusiasm & interest in learning new technologies has turned him into an avid Crypto/Blockchain & Fintech enthusiast. Currently working for a Mobile platform called Tradelike as the Senior Technical Analyst. His interest for writing has stayed with him all his life ever since started the first Internet magazine of Pakistan in 1998. He blogs regularly on Financial markets, trading strategies & Cryptocurrencies. Loves to travel.
« Why Data will Transform Investment Management
Bitcoin’s ETF & Ethereum’s upgrade delayed yet again… »