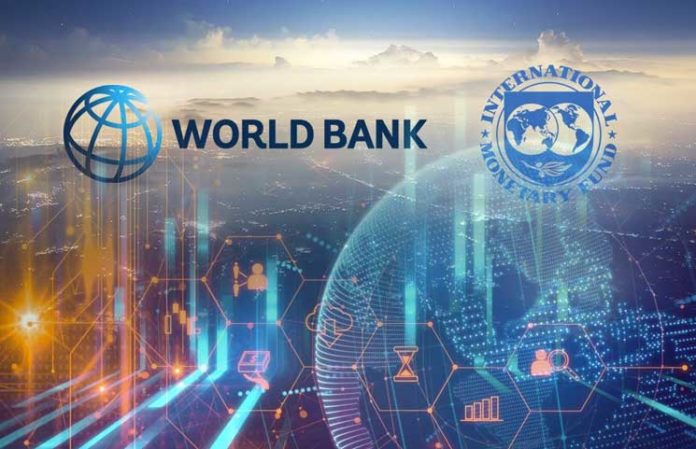 It has been an important week for the Cryptocurrencies as they have continued to build on the gains that kicked off at the start of the month. There have been some important news from the Cryptoverse as well which I will discuss in this edition of my Crypto Diaries. First things first, let’s review some of the price action in the digital assets –  last few days have seen a divergence between the gains of Crypto kingpin Bitcoin and the Alt. coins. As BTC has continued its upwards trajectory making new highs, Alt.coins dropped off towards bearish consolidation, accounting for the spike in BTC dominance – obviously with the kind of co-relation most of the Alt. coins have with BTC, it seemed a little out of line. And indeed as I was writing this, Bitcoin fell sharply towards the support region of $5200 which it had held for the past 7 days or so. Although BTC has retraced to the $5400 region, the gains still seem capped by the bearish trend line in the hourly chart. Having said that, only a convincing break of $5200 support extend this correction further. BTC dominance stands @ 54.7% with the total market cap of $170 at the time of publishing. 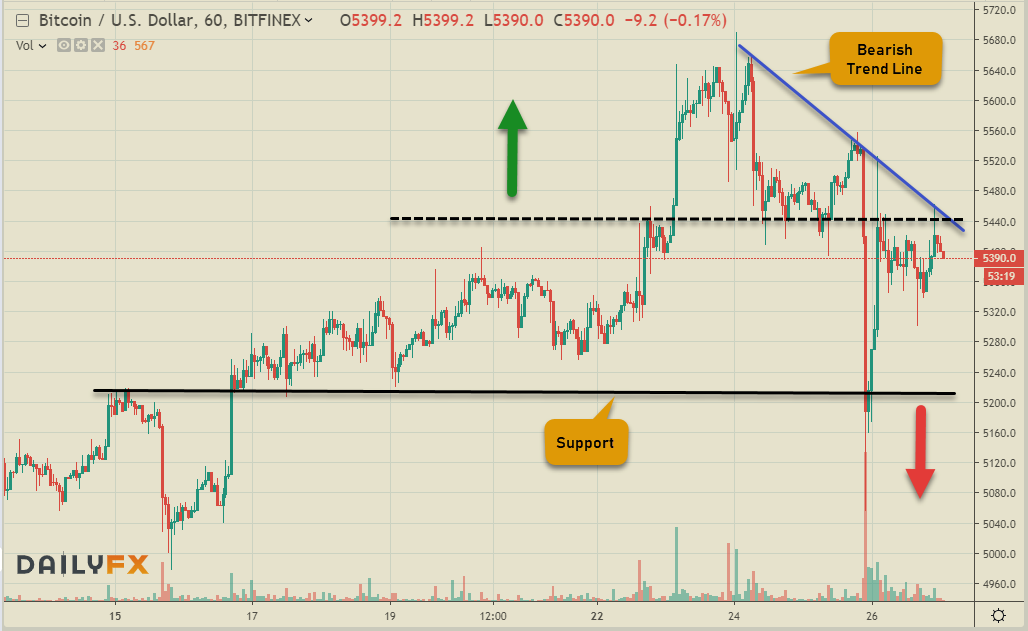 Moving on to what was the biggest story for me hitting the wires this week – International Monetary Fund (IMF) & World Bank (WB) announced the launching of a quasi-cryptocurrency dubbed the “Learning Coin” via a private enterprise level blockchain project available to their employees only. The primary focus of the project is to familiarize the staff of the two global financial bodies to the underlying Digital Ledger Technology & how it brings efficiency, transparency, universal access & financial inclusion. The Learning coin App is going to act as a hub of knowledge hosting educational material like blogs, research, videos and presentations. Learning coins will have no monetary value but the developers are working to see how the earned coins by the staff can be redeemed for some rewards, in turn trying to mimic how some real-world cryptos are utilized.

In the associated statement as reported by Financial Times, IMF recognized the fact that the DLT & Crypto-assets are evolving rapidly, which is creating a knowledge gap between the major players in the financial ecosystem – central banks, regulators and financial institutions. I believe this test project is much more important than teaching the employees of the two Washington-based financial bodies on how the technology works – for the following reasons:

Critics still think the controlling nature of central financial authorities (like IMF & WB) is the reason DLT has become so popular among masses in the first place. But here’s the thing, these financial bodies still control the financial system, and if they can evolve to implement DLT in some form or shape in return for some kind of regulation where public blockchains like Bitcoin & Ethereum receive official recognition, we can have best of both Worlds. One thing is for sure, cryptocurrencies have created a serious challenge for the status quo, otherwise they would have never even thought of exploring & learning the technology.

With the introduction of cross border payment systems, innovative trading products and the Cryptocurrencies themselves, there is no doubt that the Crypto-assets are seeing the biggest assimilation & adoption in the financial ecosystem of the world. And with the innovation gathering pace and better understanding & knowledge of this emerging technology, newer products are being introduced on a continuous basis. As reported by Asia Times recently, Afghanistan & Tunisia are setting up towards issuing a sovereign Bitcoin bond. The announcement came on the sidelines of the Spring Meetings of the Boards of Governors of the World Bank Group and the International Monetary Fund.

The  Governor at the Central Bank of Afghanistan spoke about raising US$5.8 billion for the mining, energy and agriculture sectors of the country by issuing the blockchain bonds employing blockchain technology. The war-torn country desperately needs funds to rebuild the ravaged infrastructure, and a crypto issuance can offer a way to access international markets. Similarly Tunisia’s Central bank governor told the delegates that his country had created a working group which was studying the issuance of a bitcoin band – a serious undertaking considering the fact that Tunisia was one of the first countries in the world to issue an electronic currency (e-dinar), and is already hosting digital cash payments through a system developed by Tunis-based DigitUS Tech. Adding to the list, Uzbekistan, which had sent a delegation to the IMF/World to study blockchain/bitcoin, reaffirmed its willingness to be a part of the race to issue to Bitcoin sovereign bond. Time & again we have seen less developed and/or smaller countries taking the lead in adopting the DLT to overcome the barriers to financial access & inclusion. 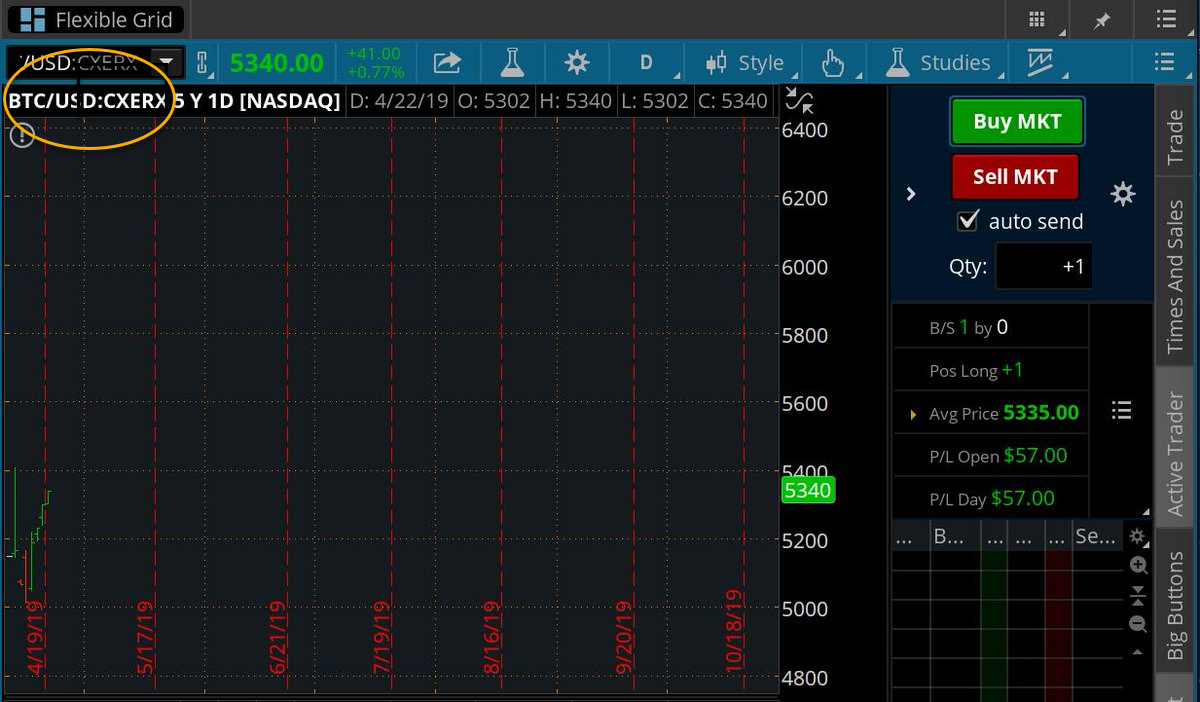 I came across an interesting story making the rounds that Nasdaq – World’s second largest stock market may allegedly be testing trading of a bitcoin (BTC)-based product. The theory was floated by a Quantitative Analyst @ StrongMarket in a tweet along with a snapshot (above) of the trading window. The analyst goes on to state that he was able to buy one BTC through his TD Ameritrade retail brokerage amount on the paper trading platform, where BTC/USD was listed under the unknown symbol “CXERX.” The chart confirmed that the BTC/USD pair was added to the platform on April 10, 2019. When the Analyst tried to contact the TD Ameritrade support to clarify the confusion, they denied any knowledge on the matter, saying that is not a symbol that is traded on the live platform. Remember though that Nasdaq had announced in late 2018 of its intention to launch BTC Futures in the first half of 2019 – also it listed two new Cryptocurrency indices from crypto market data company Brave New Coin (BNC) – Bitcoin Liquid Index (BLX) and Ethereum Liquid Index (ELX). Is Nasdaq really testing a Bitcoin-based product? I guess we will find out soon enough…

The digital assets have created a lot of Crypto-Millionaires but that doesn’t mean that we follow start investing in every project that flashes on our computer screen or ends up in our Inbox. Just like investing in any other asset-class, due diligence is always the best practice to follow. Don’t get scammed into something you don’t know about – speaking out of personal experience, I come across so many people on a daily basis promising me lucrative returns on a minimum investment by investing in different Crypto schemes. Remember, if it sounds too good to be true, it probably is. Citing increasing cases of frauds in the Cryptoverse, U.S. Securities and Exchange Commission (SEC) and the Commodity Futures Trading Commission (CFTC) recently issued an alert, warning investors about fraudulent websites trying to hoodwink you & laying out effective guidelines to making a sound investment decision.

That’s it for now folks. Hope you enjoyed the read… Stay tuned for the next edition!

Faisal is based in Canada with a background in Finance/Economics & Computers. He has been actively trading FOREX for the past 11 years. Faisal is also an active Stocks trader with a passion for everything Crypto. His enthusiasm & interest in learning new technologies has turned him into an avid Crypto/Blockchain & Fintech enthusiast. Currently working for a Mobile platform called Tradelike as the Senior Technical Analyst. His interest for writing has stayed with him all his life ever since started the first Internet magazine of Pakistan in 1998. He blogs regularly on Financial markets, trading strategies & Cryptocurrencies. Loves to travel.
« The Last Mile Problem: Understanding the Economics Affecting the Future of Blockchain
Will Value Investing Make You Rich? »