How Long Can the U.S. Bull Market Last? 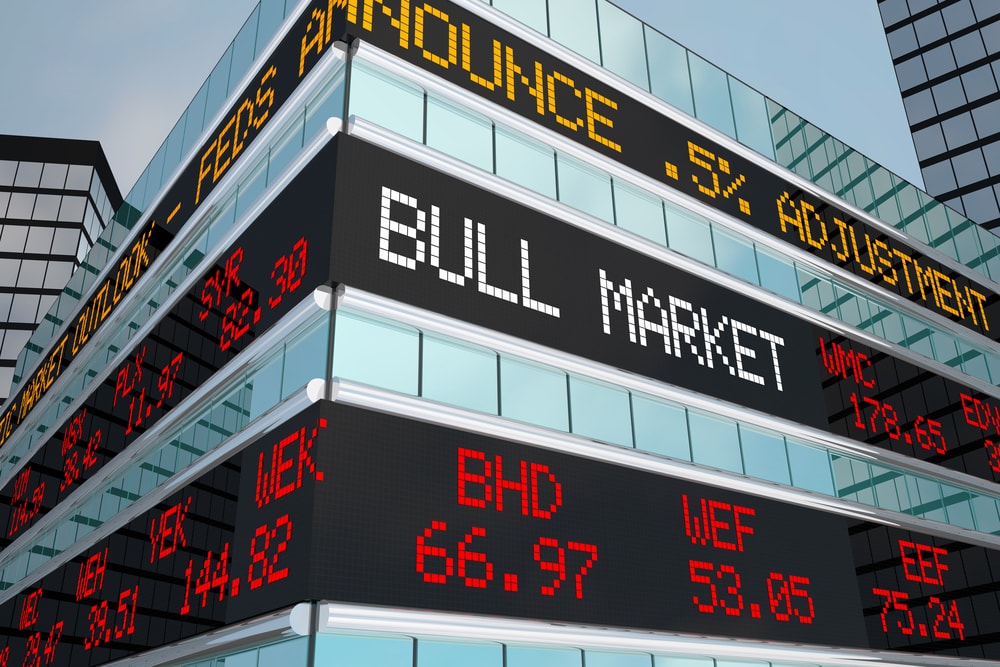 The U.S. economy is currently in the tenth year of its expansion and investors and policymakers alike are wondering what will trigger the next recession. Despite the U.S. stock market is overvalued with a highly leveraged corporate sector and the waning impact of a fiscal stimulus, the real economy (unemployment, wages, and consumer demand) has remained upbeat and there’s little evidence that the impact of the trade war is affecting consumer sentiment significantly and affecting companies’ hiring decision.

The pro-cyclical fiscal stimulus pushed growth, employment and U.S. stock markets higher in 2018. The economy grew at a faster pace and companies listed on U.S. stock markets used the windfall gains from the fiscal stimulus to buy back shares and artificially inflate their share prices and the value of the companies. This caused U.S. stock valuations to diverge strongly from company fundamentals. As the impact of the fiscal stimulus began to wear off at the end of 2018, U.S. stock markets corrected at the end of 2018 and into 2019 as a result of the U.S. – China trade war. These corrections caused markets to begin pricing in rate cuts in 2019 even as the Fed was poised to raise interest rates twice until recently, where it sounded more dovish.

Nobody wins in a trade war…

In spite of asset prices reconnecting more closely with fundamentals, stock markets remain jittery as a result of global trade uncertainty; and this is unlikely to change if the trade uncertainty persists. Not surprising, is the fact that tech stocks led the declines as they are most exposed to the Chinese markets. Furthermore, companies such as Apple and Google depend on China’s growing population and rising middle class. Not only do U.S. companies willingly participate in China due to its huge market, but their supply and value chains are also increasingly linked as items produced in one country are used in manufacturing products and services in the other.

Recent experience has shown; nobody wins in a trade war. As the U.S. Treasury imposed 25% tariffs to US$250 billion of Chinese goods, China responded with tariffs on $110 billion of U.S. products and threatened to withhold rare earth metals used in smartphones, laptops and electronic products as well as warning tourists against travelling to the U.S. This could affect the U.S. on a much more sustained basis as 24.8% of total outbound Chinese travel to the U.S, only second to 37.6% in Europe, whose tourism sector is likely to benefit if the trade war grinds on. 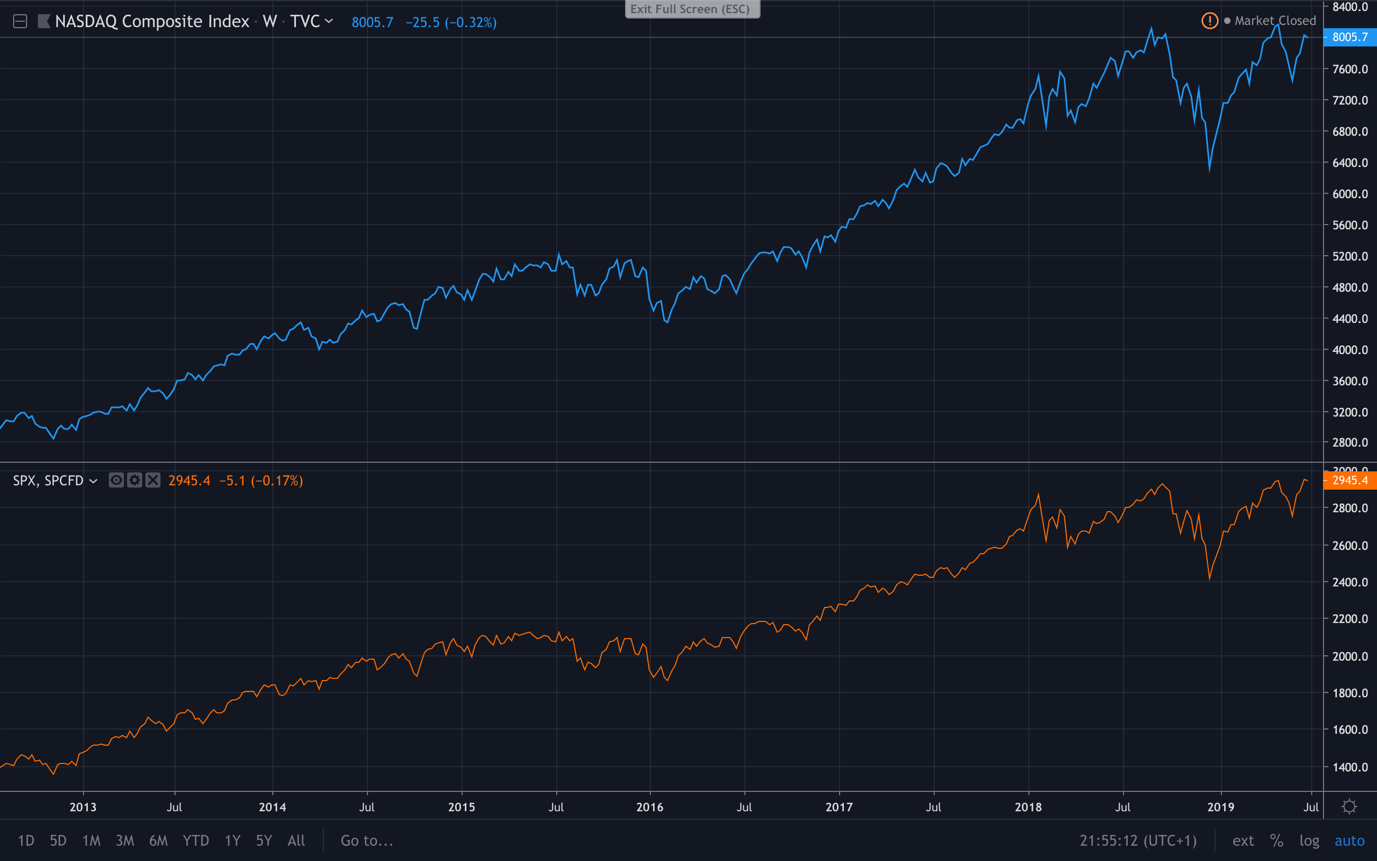 Even as the U.S. stock market has fallen as a result of the escalation in the U.S. – China trade war, the economy is forecast to grow above trend at 2.1% and 2.0% in 2019 and 2020. Meanwhile, unemployment will remain low, despite rising gradually throughout the forecast period. Inflation is, however, poised to fall to 1.5% while the core measure, which excludes volatile food and energy components will remain close to the Federal Reserve’s 2.0% target. It is surprising that the economy is forecast to perform favorably while the stock market woes persist. As such, the Fed’s dovish tilt is explained by the latter even as macroeconomic outcomes appear robust.

Despite some reservation, for what is originally termed an insurance cut, the stock market as a leading indicator provides sound justification for an upcoming cut. This justification isn’t unassailable. Following the 2018 pro-cyclical fiscal stimulus, the value of U.S. asset prices grew at a much faster pace than wages; this explains why the correction in asset prices has not seen a resounding correction in the real economy. As illustrated in the chart below, unemployment has maintained a steady downtrend and only increased marginally in January. 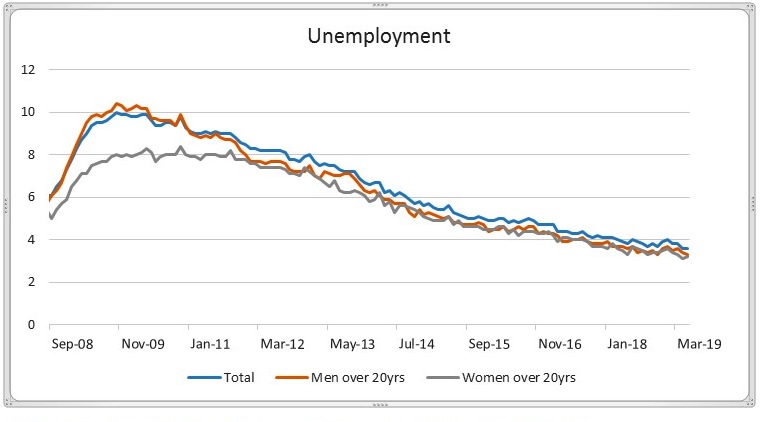 Meanwhile, the yield curve inversions overemphasized the structural divergence between the real economy (labor market) and asset prices. As such, the low noise to signal ratio saw the 10yr-2yr and 10yr-3-month treasury curve sends falls recessionary signals. For the latter to predict a recession, a 15bps spread well above 10 days should be a precursor to a 20% correction in financial markets. Nevertheless, a rate cut is all but unjustified even as the Fed might struggle to balance a rate cut unless it lowers the U.S economy’s growth outlook as the impact of the trade war begins to bite, however slowly. Furthermore, if underlying inflationary persist, some might question the legitimacy of rate cuts. But an uncertain outlook appears to be a viable rebuttal.

Meanwhile, the originally termed insurance cut will likely extend the current bull run, incentivize capital flows into riskier assets and support the labor market. Hence the divergence between the real economy and financial markets will likely persist through 2021. By no means, I’m I forecasting a never-ending bull run, but the current financial cycle will likely be extended further.

The U.S economy has seen its longest bull run on record, with strong economic activity, falling unemployment, rising wage, and asset prices. Nevertheless, the distributional effects of tax cut between asset prices and the real economy were uneven, which explains the lagged response of the U.S labor market to falling asset prices. As such, a rate cut will likely extend the current bull run with unemployment rising only marginally in the coming months. This divergence in accrued benefits in the asset market and lagged labor market response to the impact of the trade war suggest it will be difficult to predict a bull run past 2021- as the conditions will be ripe for a recession.

Henri Kouam Tamto Henri Kouam Tamto is a macroeconomist focusing on Oil, FX and Credit markets in Advanced and emerging market economies. Working both independently and as part of a team, Henri forecasts and writes both thematic as well as research notes on economic data releases, Central bank policy, and global commodity prices. He also has a strong interest in trade policy and the implications of globalization for countries and asset classes.
« The Impact of 2008 Financial crisis on 20 biggest Bankruptcies in U.S History
How big are the ‘Big Techs’? »