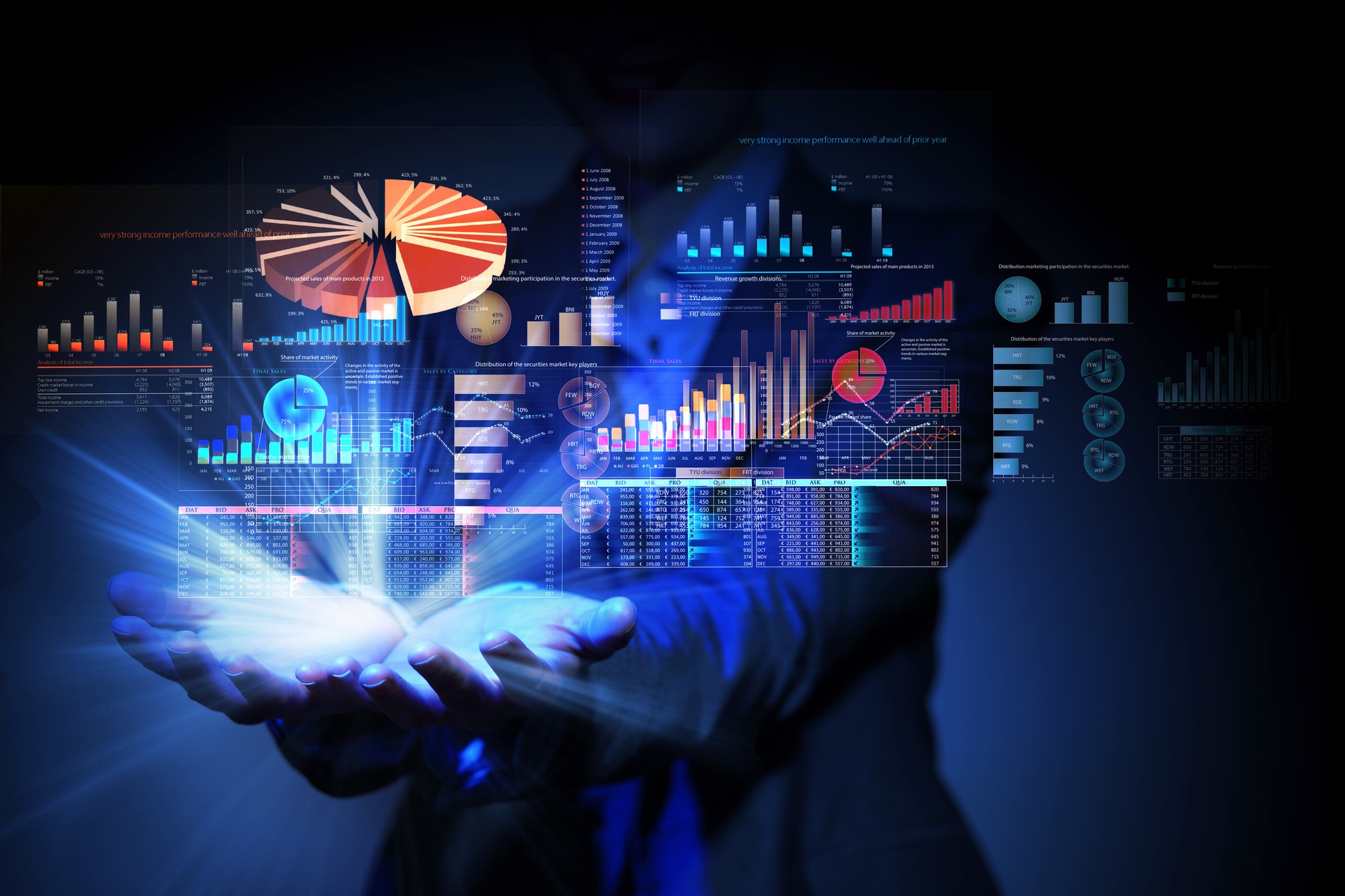 That time of the week again when I review the Financial markets. Cryptocurrencies still treading waters after hitting new lows, US stocks proving their resilience in the face of every sell off & Greenback making new highs against Majors this week. Let’s slice off the information & go in a little detail for the 3 segments of the Financial markets.

Difficult time for the digital coins doesn’t seem to shake off that easily specially when a governing body like IMF urges the Central banks to compete with Cryptocurrencies & you know where that story is going to go – the only way to compete would be to come up with their own digital currencies to replace the fiat currencies, which have similar functionality as the Alt. coins. Not that this has impacted the price of the Cryptos in a major way since they have been trading in a narrow range price band for a while – this however can have long term repercussions for all parties involved. 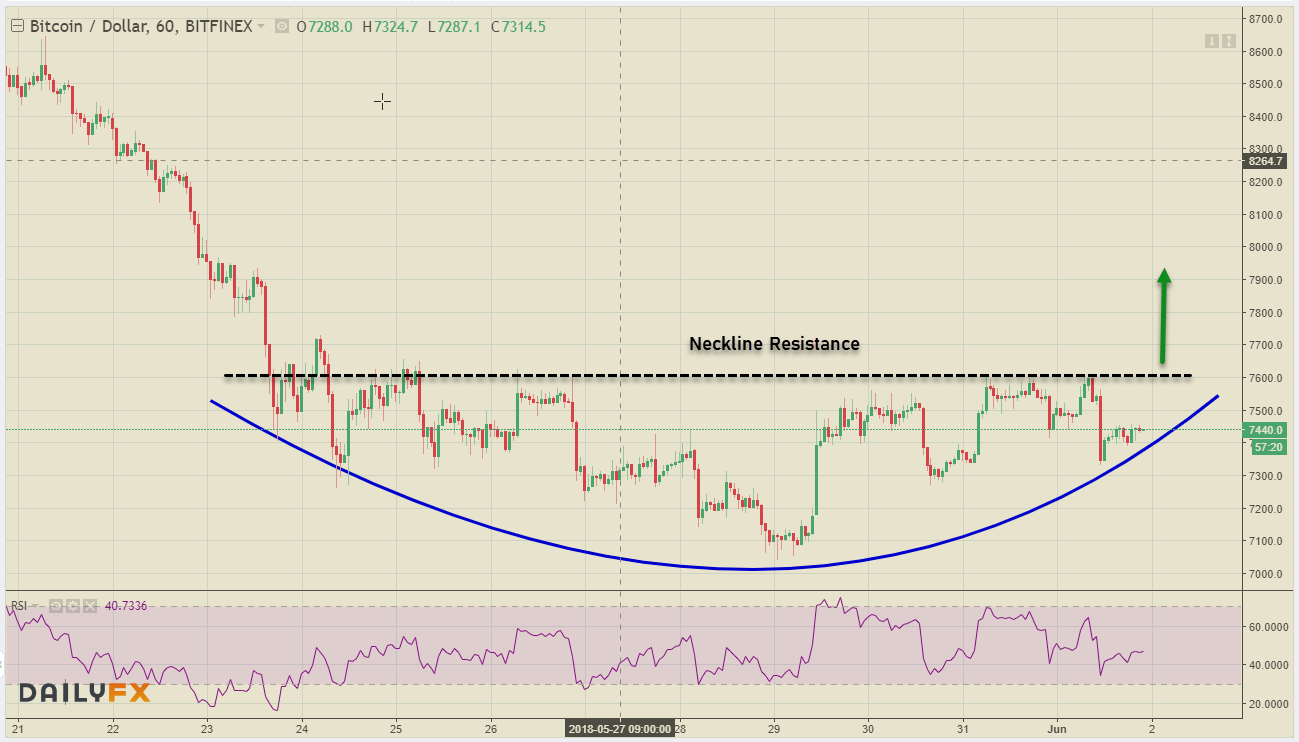 As the volatility has receded recently I am going to look at the hourly chart of Bitcoin this week. Crypto kingpin seems to be continuously bogged down below the $7600 level. This neckline resistance needs to be breached for the BTC to make headway to the upside in the Short term targeting $8000. BTC dominance in the Cryptoverse is at 38.6% at the time of writing. Looking at the CCI30 Crypto index readings it has fallen further from the 7548.00 level last week but the marketcap has improved to 333.23B at the time of this writing.

Let’s look at some of the news making headlines in the Cryptoverse with the mainstream adoption & acceptance continuing: 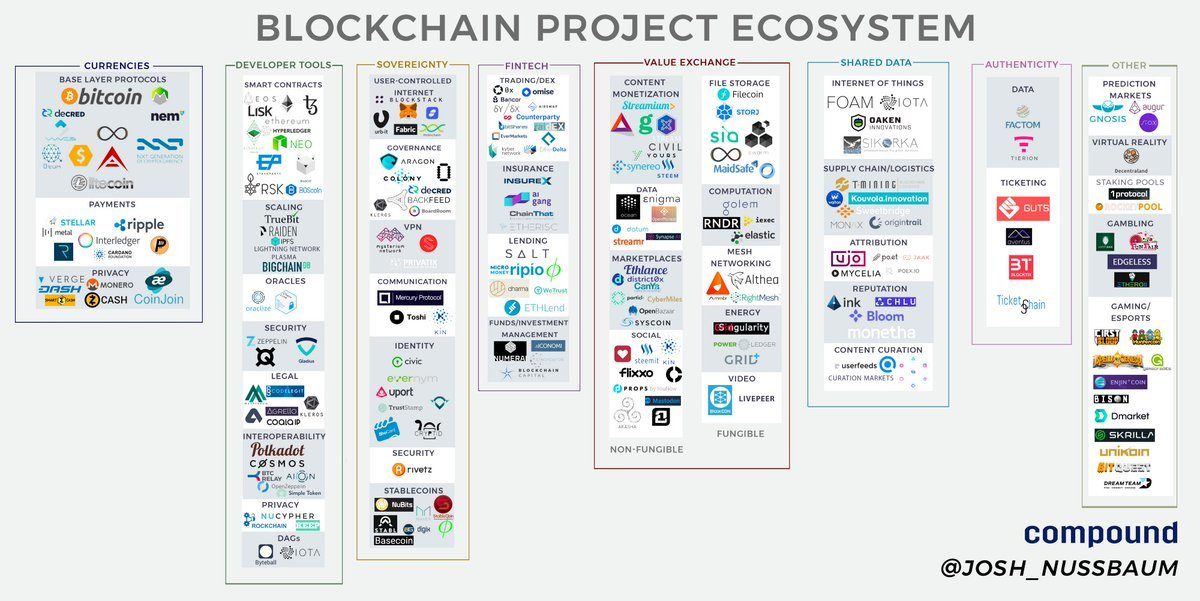 Greenback was the king roaring all week pinning down its counterparts finally beginning to pause towards the end of the week – whether it just turns out to be a breather or start of a significant correction remains to be seen. Continued weakness in European currencies & emerging markets’ problems helped USD stay on a bullish trajectory. Better than expected Non Farm payroll numbers out of U.S. gave it a further impetus. 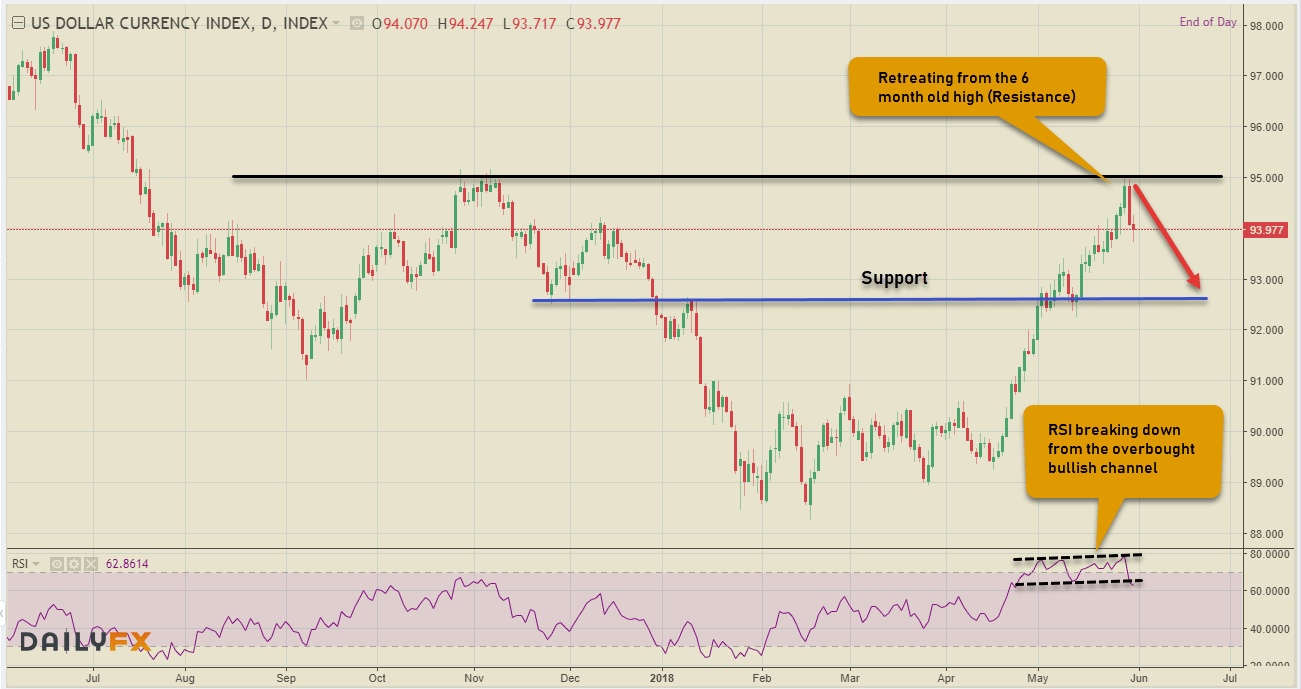 Analyzing the Dollar Index chart shows the correction might finally be on the way. DXY has receded from the MT resistance level of 95.00 to close @ 93.97 – also the overbought RSI has fallen below the 70 level pointing to corrective weakness to 92.80. The up move does look a little over extended here with the softness expected in the short term.

Taking a glance at the USD Majors this week was an eventful one with the European duo (Euro & Pound) fell to fresh weekly lows of 1.1511 & 1.3208 respectively on the back of weak economic numbers out of Europe & ongoing geo political risks. The most glaring move was in USDCAD where a less dovish BoC rate hold made the pair plummet to 1.2820 before sharply rebounding to psychological barrier of 1.3000 on news of imposition of U.S. import duties on Aluminum & Steel. This will also have negative implications for NAFTA renegotiation which looks almost certain to fall apart now. Rebound in U.S. equities on Friday proved helpful for the USDJPY to turn back up from the recent lows of 108.15 – the larger downtrend still seems intact. The commodity duo of AUDUSD & NZDUSD are shaping constructive moves in the Short term in the larger  downtrends. 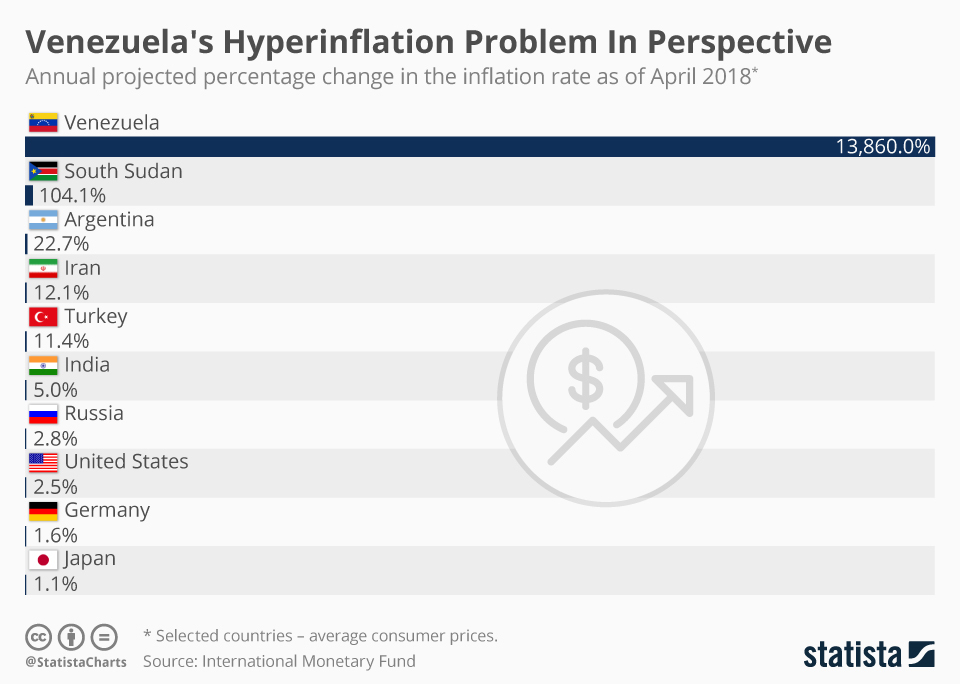 And finally here is an info graphic on Venezuela’s currency crisis with the inflation exceeding 13,000%! This is an alarming statistic considering emerging market currencies like The Turkish lira, Brazilian real, and Argentine peso have been collapsing over the last month.

The holiday shortened week in U.S. equities was nothing less than a roller coaster ride – down 400, up 300, down 200, up 200 – to put it into perspective. Europe woes earlier in the week sent the markets reeling with a massive sell off in financials before recovering the very next day. As things started to settle down in Europe, calming bond markets brought some sanity back into Equities as well. The U.S. equities so far have responded with tremendous resilience to every sell off & economic reforms like tax breaks & repealing of Dod-Frank regulation seems to have worked well, but the trade war fears have ballooned even further with the imposition U.S. metal tariffs on EU, Canada & Mexico. China-U.S. talks are already on rocky grounds & most of the affected countries from these tariffs have responded  immediately with their retaliatory measures. NAFTA renegotiation is almost certain to head towards a failure as a result of these moves. Major U.S. indices present a pretty mixed weekly picture  with the The DJIA (-0.48%) down and S&P 500 (+0.49%) managed to hold on to smallish weekly gains, however the tech heavy Nasdaq (1.62%) continues to outperform.

The S&P 500 chart is shaping up nicely to move up with a set of higher lows in place. Although the resistance of 2740 is still in tact which needs to be overcome to confirm the breakout on the topside to 2766.80. The whip saw action in the markets still points to further erratic moves going forward. The tech sector which has carried the U.S. market continues to outperform giving investors confidence… at least for now. Something to ponder over before in the info graphic below. 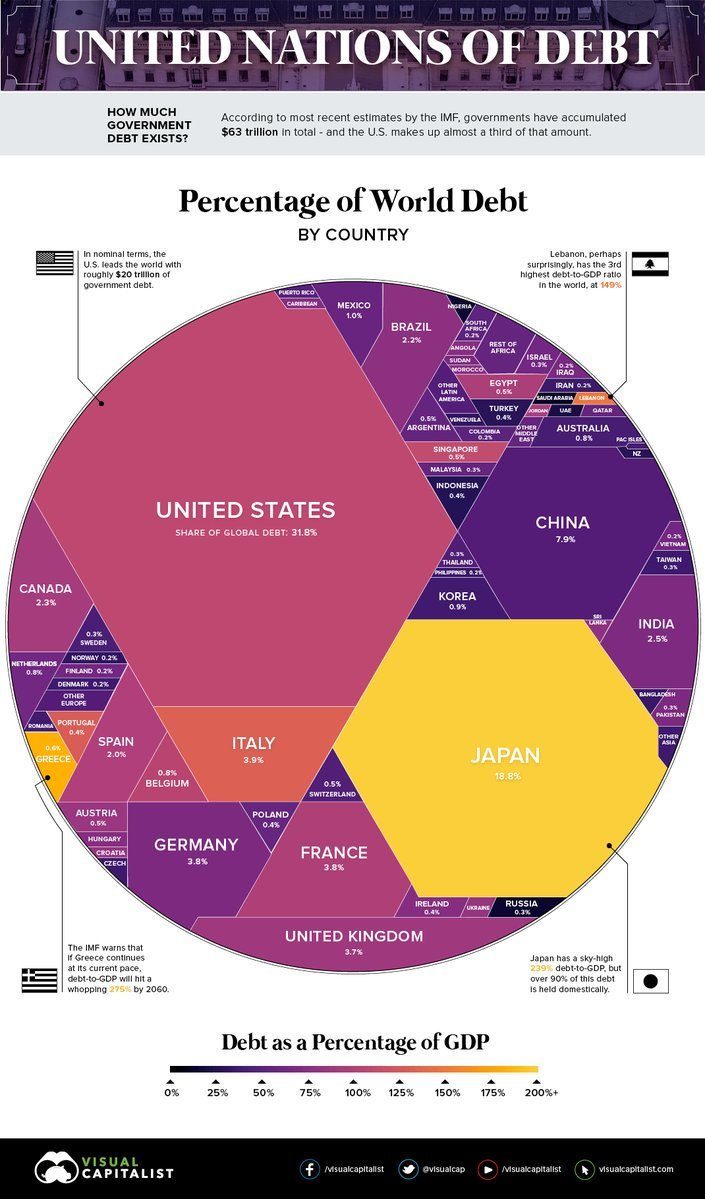 A news piece before I wrap up the blog: More than 230 Chinese stocks, known as A-shares, have been finally added to MSCI’s Emerging Markets Index (ETF: EEM), giving ordinary U.S. investors greater access to mainland China. And finally before signing off… something for you guys on the lighter side. 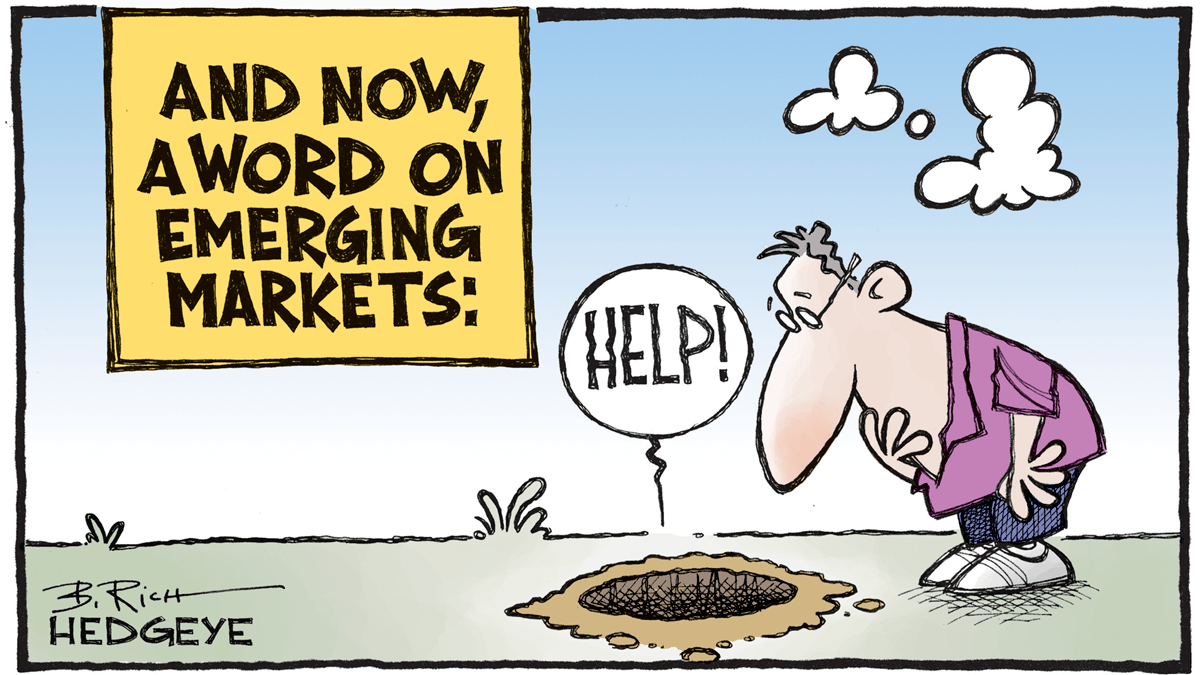 Faisal Khan Faisal is based in Canada with a background in Finance/Economics & Computers. He has been actively trading FOREX for the past 11 years. Faisal is also an active Stocks trader with a passion for everything Crypto. His enthusiasm & interest in learning new technologies has turned him into an avid Crypto/Blockchain & Fintech enthusiast. Currently working for a Mobile platform called Tradelike as the Senior Technical Analyst. His interest for writing has stayed with him all his life ever since started the first Internet magazine of Pakistan in 1998. He blogs regularly on Financial markets, trading strategies & Cryptocurrencies. Loves to travel.
« USD backed Cryptos – An overview
How is Bitcoin Mining Affecting the Environment and What are Some Solutions? »