Singapore has been a hub of Blockchain & Crypto activity ever since China outrightly banned Cryptocurrencies. Not only has the state welcomed the new technology with open arms but the government itself has been exploring the development of decentralized systems. Project Ubin was initiated by The Monetary Authority of Singapore (MAS) in collaboration with R3 blockchain consortium to explore simpler & more efficient replacement to current payment & settlement systems via the issuance of Central bank issued digital tokens which is the Singapore Dollar (SGD) in this case. The project got underway in November 2016.

The Project consisted of different phases – Phase 1 of which was completed on March 9, 2017 which saw the issuance of digital token equivalents of Singapore Dollar by conducting a Proof of concept on an Ethereum blockchain. This meant the usage of digital tokens in the Real Time Gross Settlement system (RTGS). Completion of Phase 2 was announced on October 5, 2017 where software prototypes of three different models of interbank payments were introduced. Accenture was the managing partner for these software prototypes with R3 Corda, IBM HyperLedger, and ConsenSys Quorum providing DLT support platforms & Microsoft was engaged to deploy these prototypes on its Azure Blockchain.

And more recently, MAS & Singapore Exchange (SGX) announced the development of an automated method of settlement for tokenized assets. The system was developed by leveraging the open sourced software developed in the Phase 2 of the Project Ubin. It is dubbed as Delivery versus Payment – DvP (securities settlement) mechanism which employs smart contracts to settle transactions on different blockchain platforms. Blockchain startup Anquan, Deloitte & Nasdaq were the technology partners in this recent endeavor where the successful automation has resulted in an increased efficiency, reduced settlement risks while demonstrating interoperability and investor protection. Future phases of the Project include the implementation of the Payment versus Payment – PvP (Cross-border settlement system) before targeting the operating model to streamline processes & assess policy impact. Final phase would be the implementation of a comprehensive Cross-border settlement of payments & securities – DvPvP.

It was in March 2016 that the term ‘CAD-coin’ was used at the Canadian Central bank to refer to the digital equivalent of the Canadian Dollar. This got the ball rolling on Project Jasper which is a Public-Private partnership to understand how the DLT system works & how its potential could be utilized in real life payment settlement scenarios. The Project is a collaborative research initiative between the Bank of Canada (BoC), Payments Canada, TMX Group & Accenture to study & eventually implement the DLT to transform the wholesale payment settlement system. 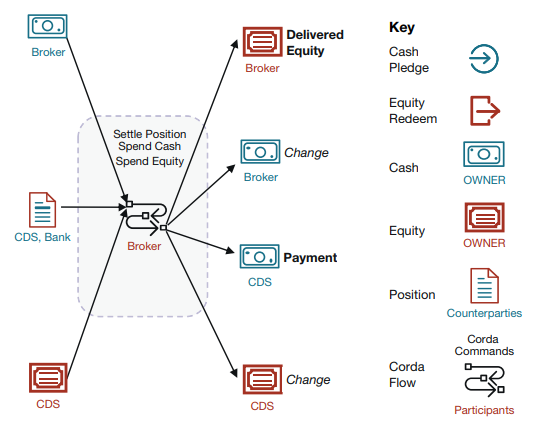 The phases of ‘Jasper’ were pretty similar to its contemporary ‘Ubin’ wherein the first phase consisted of building a DLT platform on the Ethereum platform with the proof of concept mechanism. The second phase of the project saw the transferring of the prototype from Phase I to R3’s Corda platform to see how it functions in a centralized structure. The first two phases were completed in 2017. Phase III explored ways to integrate the platform with integrating the digital assets on the platform with foreign exchanges & securities while maintaining the privacy of the market participants which is a unique feature of Jasper. Findings of the third phase were published recently. In addition to this, Bank of Canada has also partnered with Bank of England (BoE) & Monetary Authority of Singapore (MAS) on developing a faster & cost-effective cross-border payments settlement system. A preliminary report has been published by BoC, MAS, BoE & HSBC, with contributions from Toronto-Dominion Bank, the Overseas-Chinese Banking Corporation, the United Overseas Bank, KPMG and Payments Canada which outlines the role of the emerging technology of DLT in this Digital Transformation. The report basically marks the fourth phase of Project Jasper. Both Canada’s Jasper & Singapore’s Ubin are working hand in hand achieve a cross-border settlement system based on DLT.

Bank of Japan and the European Central Bank: Project Stella

With similar initiatives as in Singapore & Canada to explore the use of distributed Ledger technology in the financial ecosystems, BoJ & ECB jointly launched the research project Stella in Dec. 2016. Two phases of this project have been completed so far in Sep. 2017 & Mar. 2018 respectively. The report for the most recent phase completion was published concurrently with the findings.

The first phase entailed a study whether the liquidity-saving mechanism of the current Real Time Gross Settlement (RTGS) could be executed in the DLT system. The experiment was conducted with the replication of the real world scenarios in IBM’s HyperLedger Fabric framework. Efficiency of the system was measured based on the latency of the system. Safety features were also tested in scenarios of one or more nodes failing or data being sent in an incorrect format. Phase II tested the settlement of securities against cash in a DLT environment. The project found that cash & securities transactions can be executed within the same ledger (single ledger DvP) or on separate ones (cross-ledger DvP – figure above), however the complexity would be greater in the latter. BoJ & ECB continue to experiment with different platforms, software & setups. The practical aspects like the integration with the current systems, partnership considerations or monetary policy implications have not been considered as yet.

In January 2018, the South African Reserve bank (SARB) launched Project Khokha (Zulu for Pay) adding to one more of the central bank initiatives to explore the usage of DLT for the wholesale payment system. The SARB initiative has seven banking partners, a technology partner & a consulting firm.  Also the project used JPM’s Ethereum-focused Quorum DLT platform using  Byzantine fault tolerance consensus mechanism, Pedersen
cryptography commitments, Whisper private messaging, and range proofs. The project successfully completed the trial by achieving lower latency, scaled up transactions by maintaining the confidentiality of transactions. While the experiment was a complete success, SARB does not intend to replace the current RTGS system at this point, however it would be looking forward to completing a similar trial on cross-border payment settlement system. The central bank wants to study the legal & regulatory aspects of such a system before integrating it into the current architecture. 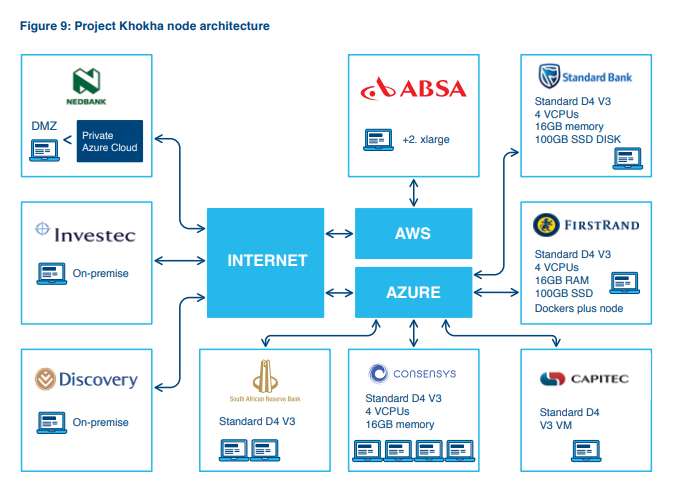 The Bank of Thailand has announced that it has started work to research, develop & trial a Central Bank Digital Currency (CBDC) to increase efficiency & lower cost for interbank settlement between domestic banks. All 14 major Thai banks, the Central bank, seven state-owned enterprises & corporate giants are collaborating under the umbrella of ‘Thailand Blockchain Community Initiative’ for this project. In August 2018, the bank announced it was working with R3’s Corda platform to issue CBDC using the Proof of concept mechanism. The first prototype for this project is expected sometimes in early 2019.

While most of the Central banks have denied having plans of issuing a CBDC anytime soon, Sweden is one of the very few developed countries that is actively looking into introducing a CBDC called e-krona – digital alternative to its fiat currency. Sweden’s Central bank, Riksbank, which is the oldest central bank in the World started the project in March 2017 to see if the option of having an electronic form of payment to complement Cash would be feasible. Phase 1 in 2017 was meant to draw a proposal & potential design for the issuance of a digital currency. Phase 2 in 2018 has been used to refine the concept & draft regulations to govern the electronic currency, while two alternatives have been sought for Phase 3 in 2019 – to either implement the e-krona system or leave it for continued analysis. 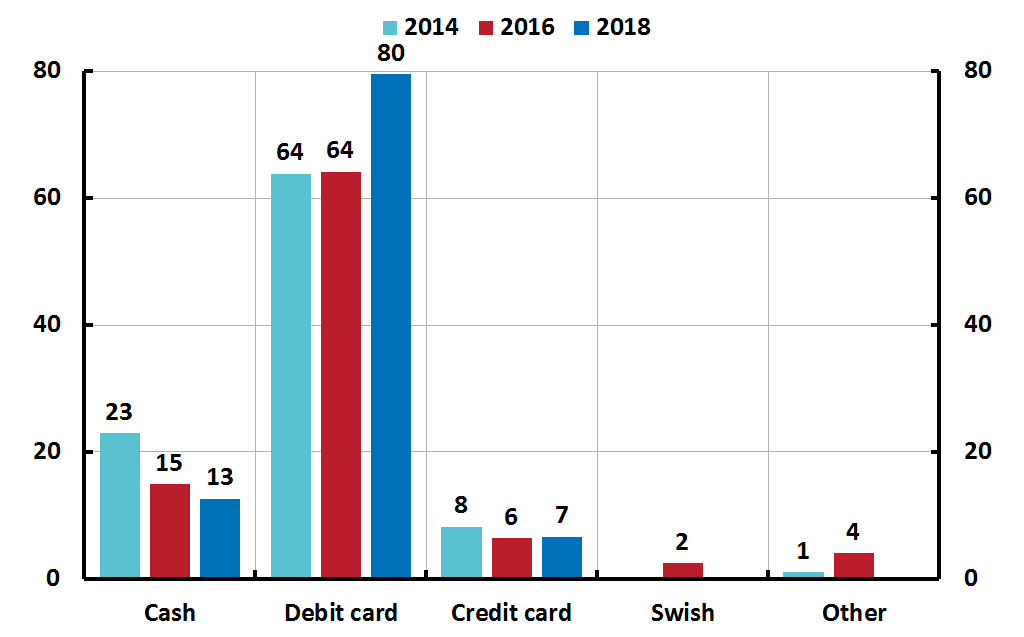 The project was initiated based on some sound statistics on the massive of decline of Cash as a form of payment in the country. According to a 2018 survey of Riksbank only 13% of people are using cash for their purchases falling from 23% just four years ago. If the trend continues Sweden may find itself in a spot where no one is willing to accept Cash as a form of payment. It is obvious the State wants to have an active role in the monetary system and it is not willing to hand it over to third parties which are in nobody’s control. Looking at the numbers alone, I am pretty sure Riksbank is going to implement the e-krona system.

Another example of a state issuing a fully digital currency is Petro of Venezuela. Although it has not been a complete success since the government control over it gives a lack of credibility & people in Venezuela are much more comfortable using decentralized Cryptocurrencies like Bitcoin & Dash, which are way more popular than the official digital currency. So far the move by the Venezuelan government to issue Petro to circumvent the economic sanctions & back it with Oil hasn’t proved worthwhile. Working on somewhat similar lines, Iran has recently announced its intention of launching ‘Crypto-Rial‘- digital alternative to its Fiat currency. This is on the back of SWIFT kicking Iran out of the International banking payment system after economic sanctions were placed on the country. Central Bank of Iran has said that the launch of the digital currency goes beyond maneuvering the economic sanctions – they are looking into tapping the immense potential of the blockchain technology to streamline & revolutionize the financial system at the interbank & retail level. And finally, Russia announced the launch of ‘Crypto Ruble‘ more recently. Initially,  the Russian stable coin would be exchangeable with an equivalent of its fiat money. It was also announced once the blockchain gains traction & occupies a bigger role in Russia’s economy, the Crypto Ruble would completely replace the Fiat Ruble.

International Monetary Fund Chair Christine Lagarde recently cozied up to the idea of Central banks issuing their own digital currency. This is a 180-degree turn from what the monetary authorities have been thinking & saying about digital currencies recently, nevertheless, a welcome development. I believe the financial authorities are finally realizing the potential of Blockchain & Cryptos. The change is coming…

Faisal Khan Follow Faisal is based in Canada with a background in Finance/Economics & Computers. He has been actively trading FOREX for the past 11 years. Faisal is also an active Stocks trader with a passion for everything Crypto. His enthusiasm & interest in learning new technologies has turned him into an avid Crypto/Blockchain & Fintech enthusiast. Currently working for a Mobile platform called Tradelike as the Senior Technical Analyst. His interest for writing has stayed with him all his life ever since started the first Internet magazine of Pakistan in 1998. He blogs regularly on Financial markets, trading strategies & Cryptocurrencies. Loves to travel.
« Innovation or just insanity?
Your business is built on the foundations you exhibit. »