Busy people stick to systems if they want to hit and maintain peak efficiency. That’s the premise behind Tweepsmap and RentCompass, companies that help expedite data-driven engagement and housing searches, respectively.

Not coincidentally, Samir Al-Battran founded or co-founded both companies as part of his entrepreneurial and developer passions. He talked with Twitter, Facebook, Youtube and Linkedin entrepreneur Carol Stephen about how to achieve publishing optimization.

He categorizes his posts by topic or campaign, which ensures he covers different categories each day.

“We setup different pipelines categorized by audience or topic,” Al-Battran said. “We have pipelines for our blog: one for industry articles, and one for current news.

“We have pipelines specific for Europe, Africa and Middle East, or Asia-Australia,” he said. “Each pipeline publishes at its own cadence.”

“We enable URL tracking in our scheduler,” he said. “This automatically adds the pipeline name as a campaign in our Google Analytics dashboard. Every visit will be categorized by the pipeline name.”

One of his blogs explains how the system tells where the Google traffic comes from.

“The first hashtag is usually easy, but we use the hashtag suggestions tool embedded into the Tweepsmap scheduler,” Al-Battran said.

This helps him determine which words or hashtags resonate the most with his followers.

“Sometimes it’s obvious, but we regularly check our engagement dashboard,” Al-Battran said. “This tells us the words or phrases that give our tweets the highest engagement.

“Many times, the results are surprising,” he said. “We then try to reuse those words or phrases in our regular tweets.”

For example, Stephen has found through Tweepsmap that #marketing resonates with her audience.

“We like to automate basic tasks,” Al-Battran said. “There are many scheduling services that support RSS feed integration.

“Every time a new article is published on the blog it automatically gets posted on social media. We use the Tweepsmap scheduler, of course,” he said with a smile.

Stephen asked if Al-Battran tracks which tweets generate the most clicks, follows or unfollows.

“Not all the time, but quite often we have a quick scan for that in our engagement dashboard,” he said.

“That helps us avoid tweets that are not popular, and focus on those that create most traffic,” Al-Battran said. “This also gives us feedback on what topics are appreciated the most by our followers.”

He distinguishes between tracking engagements on his personal and business accounts.

“On the personal account, it’s not important,” Al-Battran said. “For the business account, we do track, and usually give those who engage extra love We also track the engagers over time to make sure we don’t lose people.”

Both Stephen and Al-Battran manage multiple accounts, taking care not to preach to the same followers. 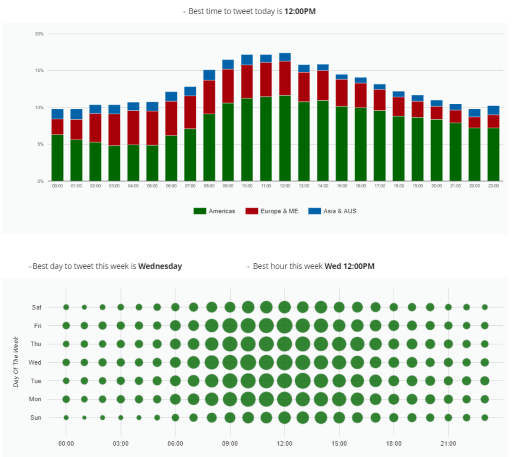 “I dislike cross-posting, especially if it’s at the exact same time,” Stephen said. “There’s no incentive to follow across the platforms if posts are duplicates.”

Al-Battran operates his personal and business accounts so that neither audience intersects.

“Many of our clients have multiple business accounts, and they want to know if their audience is different,” he said. For that, he recommends the Tweepsmap common-followers function.

Using Tweepsmap, Al-Battran has found the most popular phrase or topic used in Stephen’s #DigiBlogChat Twitter chat to be “social media,” to no one’s surprise. However, “night dragons” seem to lurk in the shadows.

Taking in all of the chat’s data, Al-Battran’s Tweepsmap has compiled a full statistical report on what makes #DigiBlogChat tick.

Jim Katzaman Follow Jim Katzaman is a manager at Largo Financial Services. A writer by trade, he graduated from Lebanon Valley College, Pennsylvania, with a Bachelor of Arts in English. He enlisted in the Air Force and served for 25 years in public affairs – better known in the civilian world as public relations. He also earned an Associate’s Degree in Applied Science in Public Affairs. Since retiring, he has been a consultant and in the federal General Service as a public affairs specialist. He also acquired life and health insurance licenses, which resulted in his present affiliation with Largo Financial Services. In addition to expertise in financial affairs, he gathers the majority of his story content from Twitter chats. This has led him to publish about a wide range of topics such as social media, marketing, sexual harassment, workplace trends, productivity and financial management. Medium has named him a top writer in social media.
« Swiss based ETP enters the Crypto trading market
25 Self Improvement ways for a successful Life »